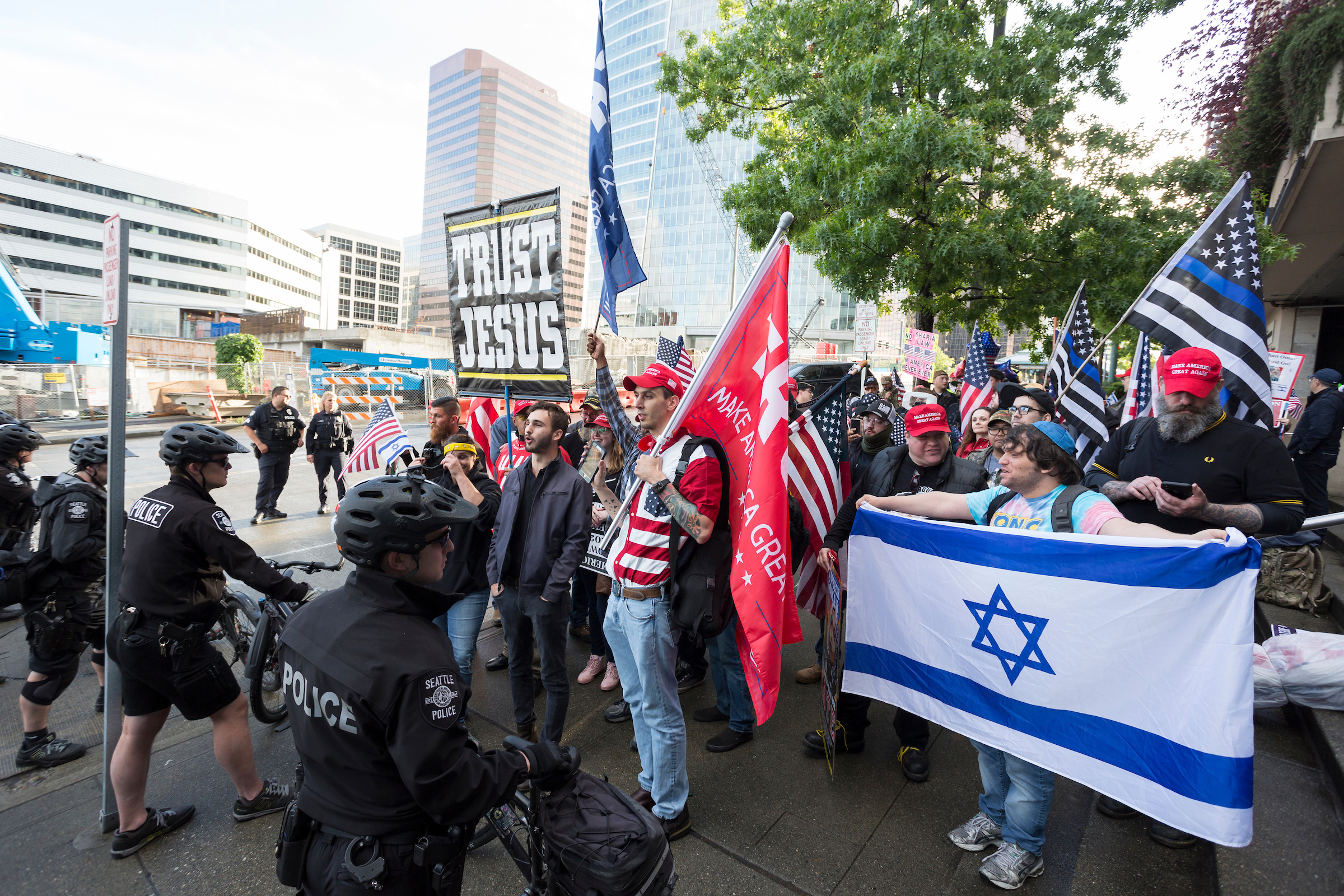 Protesters who are opposed to visiting Rep. Ilhan Omar chant as police use their bicycles to form a barricade between them and counterprotesters in Bellevue on Saturday, May 25, 2019. The Patriots of Washington group led the protest against the representative, who was headlining a CAIR-Washington Ramadan fundraiser. (Photo by Paul Christian Gordon for Crosscut)

Wherever U.S. Rep. Ilhan Omar goes, layers of security follow. The freshman congresswoman’s visit to Washington state on Saturday was no exception.

At Meydenbauer Center in Bellevue, where Omar spoke Saturday night at a sold-out fundraiser for the Council on American-Islamic Relations of Washington (CAIR-WA), police from various departments — Bellevue, King County, Bothell, Redmond, Mercer Island and the Washington State Patrol — stationed themselves inside the building, where some operated metal detectors. They were outside the building as well, guarding both the entrance to the building and various corners of the Seattle suburb’s downtown area.

Police set out to protect the “safety of our residents and to make sure their rights are protected at the same time,” Black said, while noting that a 2017 appearance in Bellevue by Education Secretary Betsy DeVos also attracted a large number of protesters.

Sarah Stuteville, CAIR-WA’s media spokesperson, said she had never before been part of such intricate security planning.

The abundance of preparation can be attributed partly to the controversy created by an appearance by Omar at a CAIR-sponsored event in Los Angeles.

At that event, held in March, Omar spoke about how many Muslims had been mistreated following the attacks of Sept. 11, 2001. After a video of the remarks surfaced, President  Donald Trump shared an edited version of her comments on Twitter, seeming to imply that Omar had downplayed 9/11 by focusing on how she referred to those responsible for the New York City attacks: “Some people did something.”

Omar, a Democrat from Minnesota, also has been criticized for a tweet in which she attempted to explain why some politicians defend Israel: "It's all about the Benjamins baby," Omar tweeted several months ago, referring to $100 bills. Some, including members of her party, were offended by her tweets and argued she had played into stereotypes about Jews, money and political power. The congresswoman later apologized.

Omar’s defenders argue the freshman lawmaker is unfairly scrutinized simply because she is one of the first two Muslim women elected to Congress. At the very least, her defenders say, the criticism Omar has faced could discourage other Muslims and women of color from running for office. At worst, they fear her critics could put the life of Omar, and others like her, at risk. Omar, 37, a Somali refugee whose family received asylum in the United States when she was a teenager, has reportedly received hundreds of death threats.

In Bellevue, outside of Meydenbauer Center, both sides of the controversy that has followed Omar gathered on the pavement, with dozens facing each other and hurling angry accusations. The two groups were separated by approximately 30 police officers using their bikes as barricades to block any kind of physical contact.

On one side, signs read: “We stand with our Muslim neighbors” and “Solidarity with Ilhan Omar.” On the other side was an assorted crew of critics organized by a group that calls itself Patriots of Washington. They included presidential supporters who sported “Make America Great Again” and “Trump 2020” hats and about a half-dozen Proud Boys, dressed in black polo shirts with gold trim. Proud Boys espouse what they refer to as an “anti-political correctness, anti-racial guilt” agenda in “an age of globalism and multiculturalism.” According to the Southern Poverty Law Center, the Proud Boys is a hate group. Both sides included members of the Jewish community.

Adrienne Weller, 78, said that, as a Jew, her identity was wrapped up in fighting for the underdog, including Palestinians and politicians like Omar. Pointing out that the lobbying group American Israel Public Affairs Committee spends money on politicians to support Israel isn’t “anti-Semitic. That’s just fact,” Weller said.

“She’s been dehumanized for telling it like it is about U.S. foreign policy,” added Steven Hoffman. “You’re not anti-Semitic just because you criticize the state of Israel.”

On the other side, a Black, Christian veteran, who would identify himself only as Kareem P., said he had traveled from Oregon for the event because he had found Omar’s comments about 9/11 disrespectful.

“Obviously I’m not a white supremacist,” he said, noting that the only point he wanted to make was that he is against Sharia, or Islamic law. When asked whether he believed Omar was advocating for Sharia law, he simply said, “Not necessarily.”

A mild-mannered Catholic woman from Tacoma said she was there because she thought Jews needed support. “We need to stand up for them,” she said, while adding that her support for the Jewish community didn’t mean she was anti-Muslim.

Some protesters, such as Carolyn Strong, a website developer from Seattle, said they were there because they were “patriots” defending “American power.”

Inside, Omar and other speakers hit on many of the same themes touched on by the counterprotesters, including American political power and standing up for religious minorities.

The emcee, Dr. Anisa Ibrahim, a professor of pediatrics at the University of Washington, said women like Omar “should be seen as powerful figures for all Americans.” 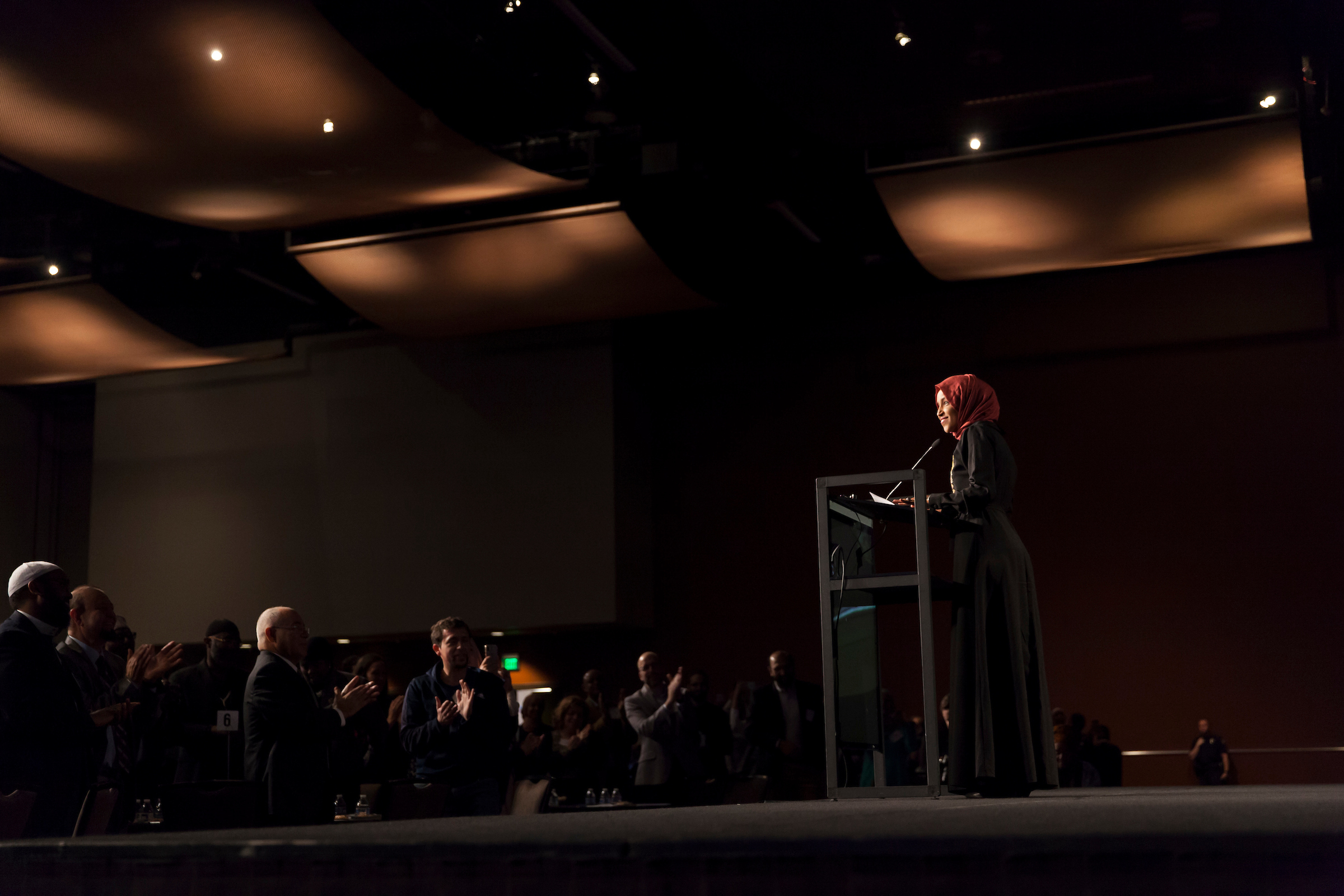 Supporters cheer for Rep. Ilhan Omar as she takes the stage at the Meydenbauer Convention Center. CAIR-WA hosted the event to raise money to fight Islamophobia. (Photo by Paul Christian Gordon for Crosscut)

Supporters cheer for Rep. Ilhan Omar as she takes the stage at the Meydenbauer Convention Center. CAIR-WA hosted the event to raise money to fight Islamophobia. (Photo by Paul Christian Gordon for Crosscut)

Throughout the evening there were references to both the shooting at Pittsburgh's Tree of Life synagogue, in which 11 people were killed, and the shooting at two mosques in Christchurch, New Zealand, which killed more than 50.

Omar, who arrived after the protesters outside had dispersed, followed Johnson-Harrell's speech by noting: “The rise of hate is not exclusive to Muslims.”

Later, the conversation continued online, with Patriots of Washington boasting on Facebook that they had outnumbered the other side.

CAIR-WA director Masih Fouladi pointed out that the nonprofit had managed to raise more than $250,000 that evening to combat Islamophobia.

Update: The caption to the photo of Zach S. has been updated to provide more context regarding his hand gesture.