Don't call it a 'hate crime.' This is terrorism. 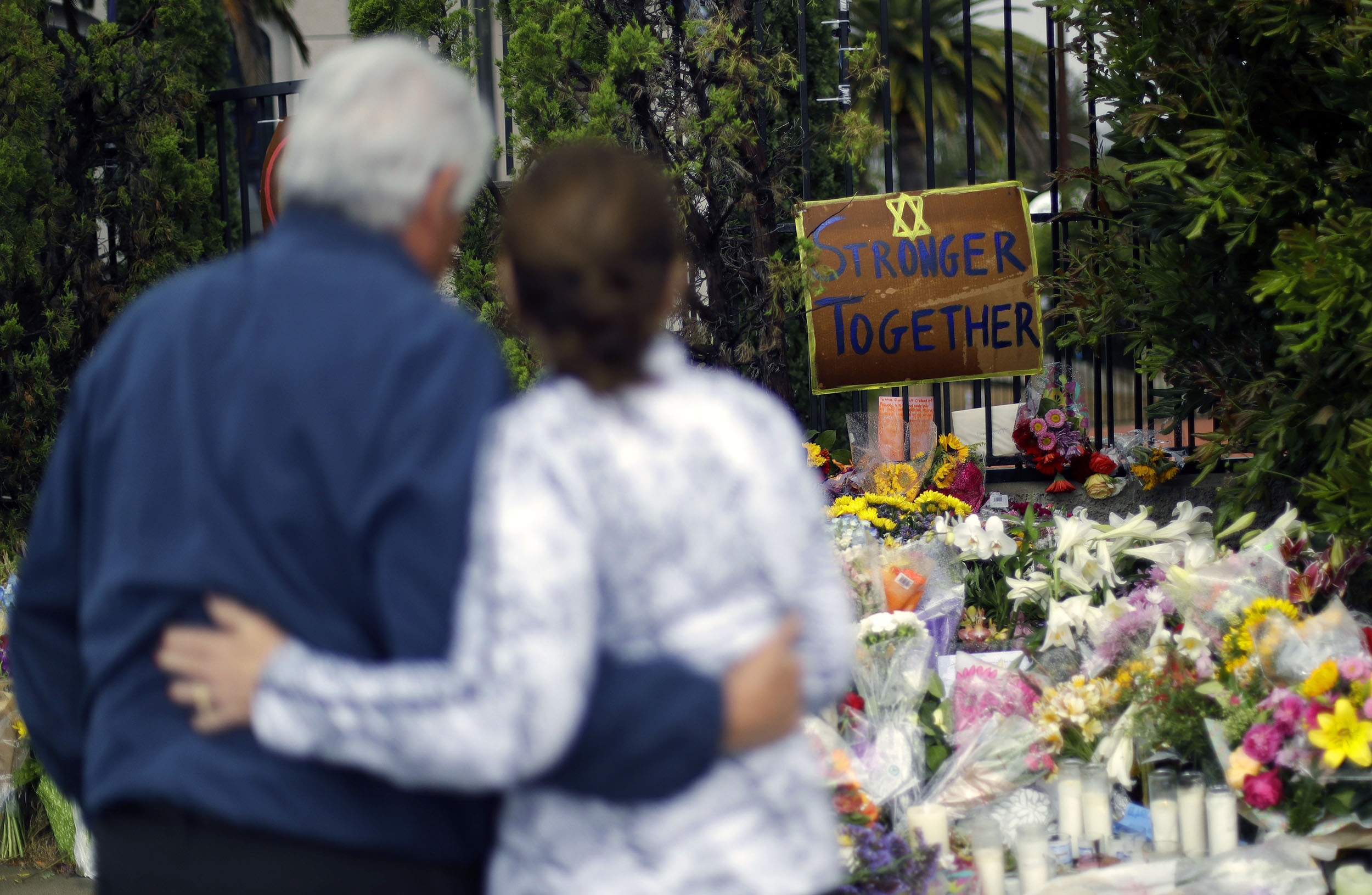 A couple embrace near a growing memorial across the street from the Chabad of Poway synagogue in Poway, California, on April 29, 2019. A 19-year-old gunman opened fire two days earlier as about 100 people worshipped exactly six months after a mass shooting in a Pittsburgh synagogue, killing one and injuring more. (AP Photo/Greg Bull)

In the Pacific Northwest and across the nation, we have reason to worry about the rhetoric and violence around our divisions.

To come up with answers that will work, we need to think carefully. For one jumping off point on the divides that have been on my mind, consider two Crosscut Festival sessions on Saturday: "Frontline & ProPublica: The Making of “Documenting Hate” and "Has the Next Civil War Already Started?" The former will chronicle investigative journalist A.C. Thompson’s journey documenting the more recent resurgence of white supremacist organizations across the U.S. The latter explores the social and political divisions in our country and potential remedies.

As with health issues, remedies for social problems depend on accurate diagnosis, something I’m particularly aware of because doctors misdiagnosed my genetic disorder for 41 years. They prescribed medications that didn’t work and berated me when treatment after treatment failed. I learned to distrust their opinions and take their recommendations with more than a grain of salt. No matter what symptoms I presented, they forced those symptoms to fit their diagnosis. Any deviation was deemed to be my misunderstanding of my own body or my failure to apply treatments correctly. In 2015, a vascular surgeon put all my symptoms together and finally came up with the right diagnosis.

The most obvious sign of medical misdiagnosis is the ineffectiveness of treatment. If acetaminophen is prescribed for a headache and the pain persists, the cause might be a tumor or aneurysm requiring deeper diagnostic tools and more appropriately tailored treatment.

The most obviously misdiagnosed social diseases are those branded as “hate crimes.” Genocide is not based on hate; it is about power. Boys and men who murder school children don’t hate children. Men who kill randomly in public places don’t hate the people they are killing. Men who murder their spouse or children aren’t acting out of hate. Police officers who kill unarmed men and women of color don’t hate the individual they kill. Young gang members are not killing because they hate. As we see from so many of their own statements, the killers are motivated by one thing: the need to gain a sense of power. They use violence as a means to that end and hate as its justification. Hate is to supremacy as an oozing pustule is to measles, an outcome, not the cause.

They project their sense of powerlessness into their violence in order to make others fear them because all across human culture what is feared has always been deemed to be powerful. They use terror as the avenue to restore their sense of power. They are not haters; they are terrorists.

If the root cause is a fear of being powerless, treatment must begin with an examination of our society’s definition of power. Is a man who resorts to physical, emotional or psychological violence powerful? Let’s explore that question.

What is more difficult: watching someone you love build a successful life without you or killing them so you don’t have to live with the pain? Killing the person seems the easy way out, the path of the coward, not the path of a person with power who knows they have to find ways to create their own life without the other person and the ability to manage and overcome the pain.

What is a greater challenge: living around people who think, act and believe just like you or around those whose history and life experience have brought them to a different perspective? Being around sameness takes no courage and no depth of character at all. It’s lazy, at best. Nature intentionally generates difference to keep an ecosystem alive. Sameness breeds disease and death. Those who would rather kill than deal with difference are short-term thinkers destined for doom.

Who is the better worker: the person who exists only in an environment filtered to eliminate potential competitors or the one who faces or collaborates with ongoing competition? A stagnant pool of water attracts only mosquitoes and disease. A fluid stream keeps its ecosystem healthy by introducing new nutrients and transforming dead and decaying objects into nutrients. Healthy competition and collaboration are the nesting grounds for innovation and creativity.

People who complain that immigrants “are taking our jobs” are simultaneously confessing their lack of confidence in their own abilities in an unfiltered environment. Maybe they should spend more time advocating for opportunities to beef up their own capabilities. Those who kill or advocate for the death of people they perceive as competitors are insecure in their own intelligence, perhaps rightly so.

These are the actions of weak, angry, fearful men who intend to humiliate and degrade their victims. Imagine seeing yourself as so powerless that you can win only if your opponent doesn’t exist. How sad and pathetic a human being does someone have to be to see the world through that lens.

I was raised to believe what differentiated a boy from a man, or girl from a woman, a child from a mature adult, was the ability to face and do the more difficult thing. White supremacists have shown an utter lack of maturity in their actions. They do the easy thing: violence. Laden with fear and a hunger they can’t satisfy, they reach for billy clubs, guns and tiki torches.

I watched two of A.C. Thompson’s episodes. It struck me that if the reporting had been about Iran, China, South Korea or even Germany, there would be no mention of hate crimes. The actions of these power-starved men would be called by a different name: terrorism. They would be labeled as proponents of genocide and their leaders akin to Stalin or Pol Pot. Their ideology would be reviled in every circle.

Imagine what would happen if African Americans murdered as many people as have been killed by these groups over the past few years. Imagine if the shooters in Miami, Las Vegas, Pittsburgh and Poway had all been Black. White supremacists label people of color as violent, yet we have perpetrated none of these mass killings. Despite generations of struggle and true exclusion from economic, educational, housing, health care and religious freedom and opportunity, Native Americans have murdered no one. Black churches have been burned down by white supremacists; how many white churches have been torched by people of color?

It’s incumbent on everyone, especially our print, online and on-air communications media, to stop using the phrase “hate crime” to describe these violent acts and begin using accurate descriptors. Call them acts of terror, murder, massacres, assault, or psychological or emotional terrorism. Be journalists; pursue and use accurate language to name the disease. Use words like “degrading,” “patronizing,” “humiliating” when describing what those wielding power were doing. Give the power back to the victims of these assaults by describing them as survivors of terrorist attacks.

At this late stage of my life, there are few effective treatments available for the disorder attacking my body, so I will live with the symptoms. Had the diagnosis come 10 years earlier, there were steps that could have ameliorated the onslaught of pain and suffering. Similarly, accurately diagnosing these acts of terror might enable our society to finally focus on effective cures.

Lilly Fowler’s recent Crosscut article describes the increase in aggressive and passive violence against Jewish people in Washington state. More workshops on how to love one another will not make those stop. Solutions must confront the power issue head on.

We need to go beyond the fallacy of hate and pursue an effective diagnosis so future generations will be spared the normalcy of violence that has become our reality.