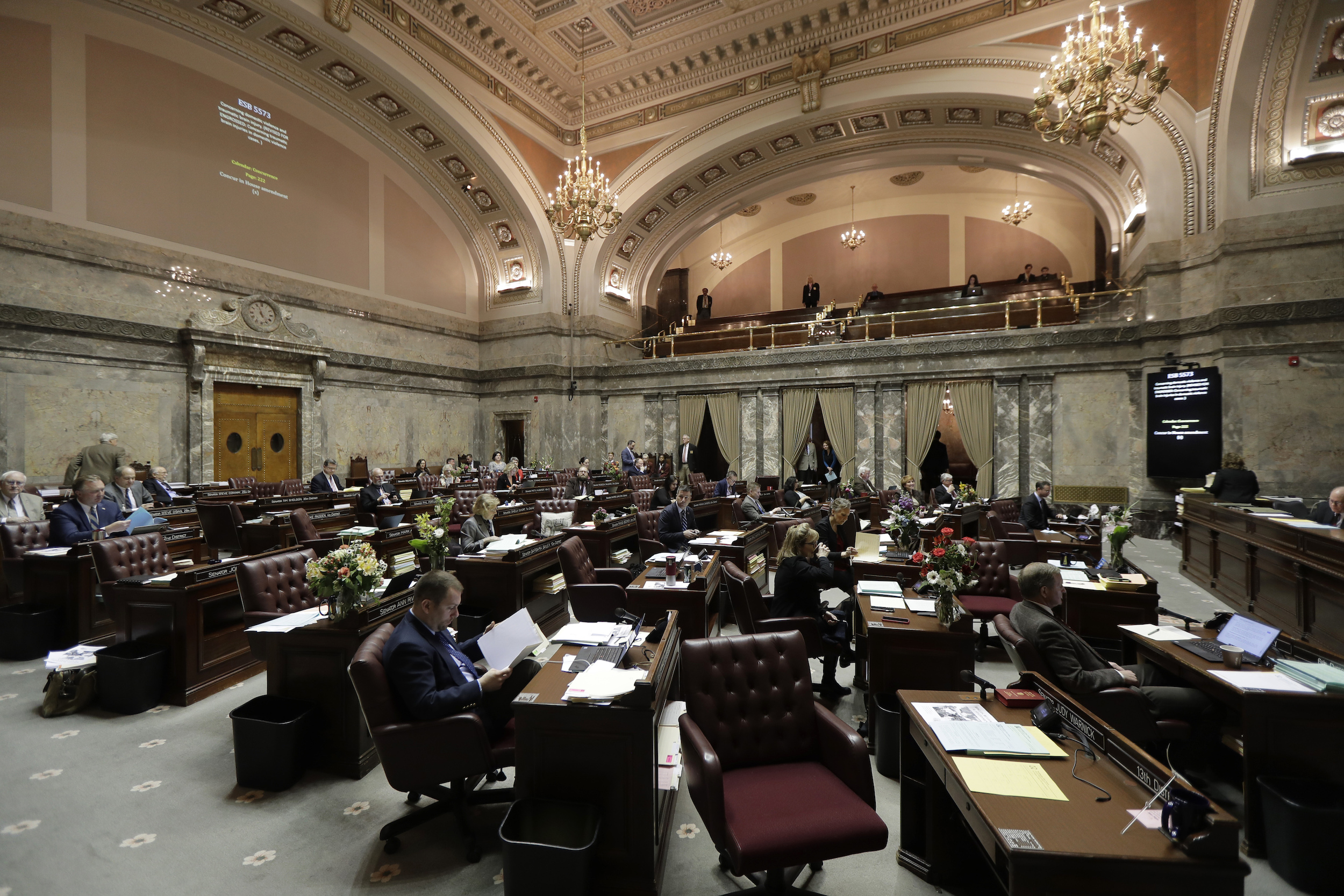 Washington state senators work at their desks, Monday, April 22, 2019, the start of the last week of the regular session of the Legislature. (Photo by Ted S. Warren/AP)

The first half of 1993 was a great time to be a Democrat.

The ’92 elections, called by some “The Year of the Woman,” swept Democrats into power up and down the ticket. Bill Clinton bested President George H.W. Bush by more than 11 points in Washington (interestingly, third-party candidate Ross Perot took nearly 24% of the vote). Patty Murray was on her way to the U.S. Senate. Most surprising was the victory of former U.S. Rep. Mike Lowry of Seattle over low-key Attorney General Ken Eikenberry in the race for governor. Christine Gregoire landed in the attorney general’s office.

The good news kept happening further down the ticket. Only one Republican, Jennifer Dunn, remained in Washington’s nine-member congressional delegation. And Democrats held handsome majorities in both houses of the state Legislature.

Though voters had turned thumbs down on Lowry in two previous bids for the U.S. Senate, they liked his pitch about better schools, more jobs and a cleaner environment. And, importantly, he pledged to pursue higher taxes only as a “last resort.” With that, Mr. Lowry went to Olympia … and almost immediately called for higher taxes.

As David Horsey, the old Seattle Post-Intelligencer’s cartoonist at the time, memorialized it, it took only a few weeks for Gov. Lowry to arrive at that “last resort.”

Republicans howled, but Lowry had the votes, with plenty to spare. Not only did taxes go up, so did spending way beyond what was sustainable (hence the tax increases). And, as a bonus, Washington went beyond its Basic Health Plan to offer an early version of Clinton Care.

But soon after the legislative session, dark clouds began looming over the liberal oasis in the State Capitol.

A business-backed measure to repeal the tax increases soon qualified for the ballot. Then came a populist measure led by Sen. Linda Smith from southwest Washington to restrict state spending to the combined total of inflation plus population increase.  A third initiative, which was unable to even garner a hearing in Olympia, qualified as well, promising to crack down on violent crime by sending felons convicted of three serious offenses to life without parole. It was called “Three strikes, you’re out.”

In November the tax increase repeal barely failed, but the far more restrictive spending control initiative passed, and “three strikes” (disclosure: I co-authored and led the drive for its passage) sailed through with 76% of the vote. Olympia’s liberal establishment was knocked back on its heels. It was a sign of things to come.

The following year, 1994, was not a great time to be a Democrat.

At the national level, Republicans won 54 seats to win back control of the U.S. House for the first time since the early ’50s. Six of those new seats were picked up in Washington. In Olympia, Republicans won back control of the state House and came within an eyelash of taking the Senate. By 1996, liberal Mike Lowry was on his way out, replaced by a more cautious and moderate Democrat, King County Executive Gary Locke.

Fast forward a generation. Democrats are enjoying the first half of 2019. Voters delivered midterm gains to the party both in the U.S. House, where the Dems gained 40 seats, and in Olympia, where a razor-thin majority in both houses became fat Democratic majorities — 28-21 in the Senate, and 57-41 in the House.

Once again came a massive increase in spending, this one $8 billion, well over 17%, or about three times the increase in population and inflation (In the past 20 years Initiative 601 to restrict spending has been whittled into irrelevance). Even though the economy has delivered a huge surplus that would have allowed a 13% increase in spending with no increase in taxes, the governor and majority Democrats forced through tax increases on small companies in the service industries, big companies operating abroad, banks, and on people selling homes for more than $500,000.

While they were at it, they lifted the cap on school levies, just a year after these caps were imposed, and possibly in defiance of the Supreme Court ruling in the McCleary case that school districts had to reduce their reliance on levies because they produce unequal funding between districts. Flexing its muscle, the teachers union (Washington Education Association) made sure none of that money would go to charter schools, even though they are public schools.

Democratic legislators in the Senate Judiciary Committee tried to kill the 25-year-old Three Strikes law by ending the penalty of life without parole for almost all violent crimes, or series of crimes.  They ended up removing the crime of second degree robbery, as a “strike” even though, especially in King County, Robbery 2 is often pleaded down from Robbery 1 (armed robbery). The Democratic majority in both houses concurred, which cripples the initiative.

Finally, on the session’s last day both houses stepped in and blocked a public vote on controversial Initiative 1000 to bring back race as a factor in college admissions and public hiring.  Instead legislators voted the initiative through almost along party lines (one Democrat joined all Republicans in each House to oppose it).

What is sharpening the hard edge of these policy changes is the cynical politics behind them. Some of these tax increases came late at night or in the wee hours of the morning on “Title Only” bills, with content suddenly provided by interest groups and harried staff members. Open government? A transparent process? According to Jason Mercier at the Washington Policy Center, bills authorizing over a billion dollars in new and higher taxes were approved in the last three days of the session, several late at night. Had this been about serving the public interest, it would have been done in daylight, with lawmakers proudly calling attention to what they were doing.  Instead this was about serving donors and special interests, the real driver of these spending and tax increases.

Will business groups step forward to file a referendum on some of these tax hikes? Perhaps. Will we see a latter-generation initiative to limit spending? If so, it will happen next year, when lawmakers are also on the ballot. Ditto for a rejuvenated “three strikes.”

But we will definitely see a fight over I-1000 this year. Eight hours after sine die — adjournment — in the Capitol, Linda Yang from Washington Asians for Equality was standing outside the Elections Office of the Secretary of State, waiting to file a referendum on I-1000.

Reaction to online news coverage suggests lots of public interest in I-1000’s passage and the anticipated battle to put it to a public vote. A Seattle Times article, for instance, drew some 725 comments — approximately 80% angry about what legislators did, how they did it, or both.  The public, at least outside its most progressive provinces, does not appear to be celebrating with Jay Inslee and legislative insiders right now.