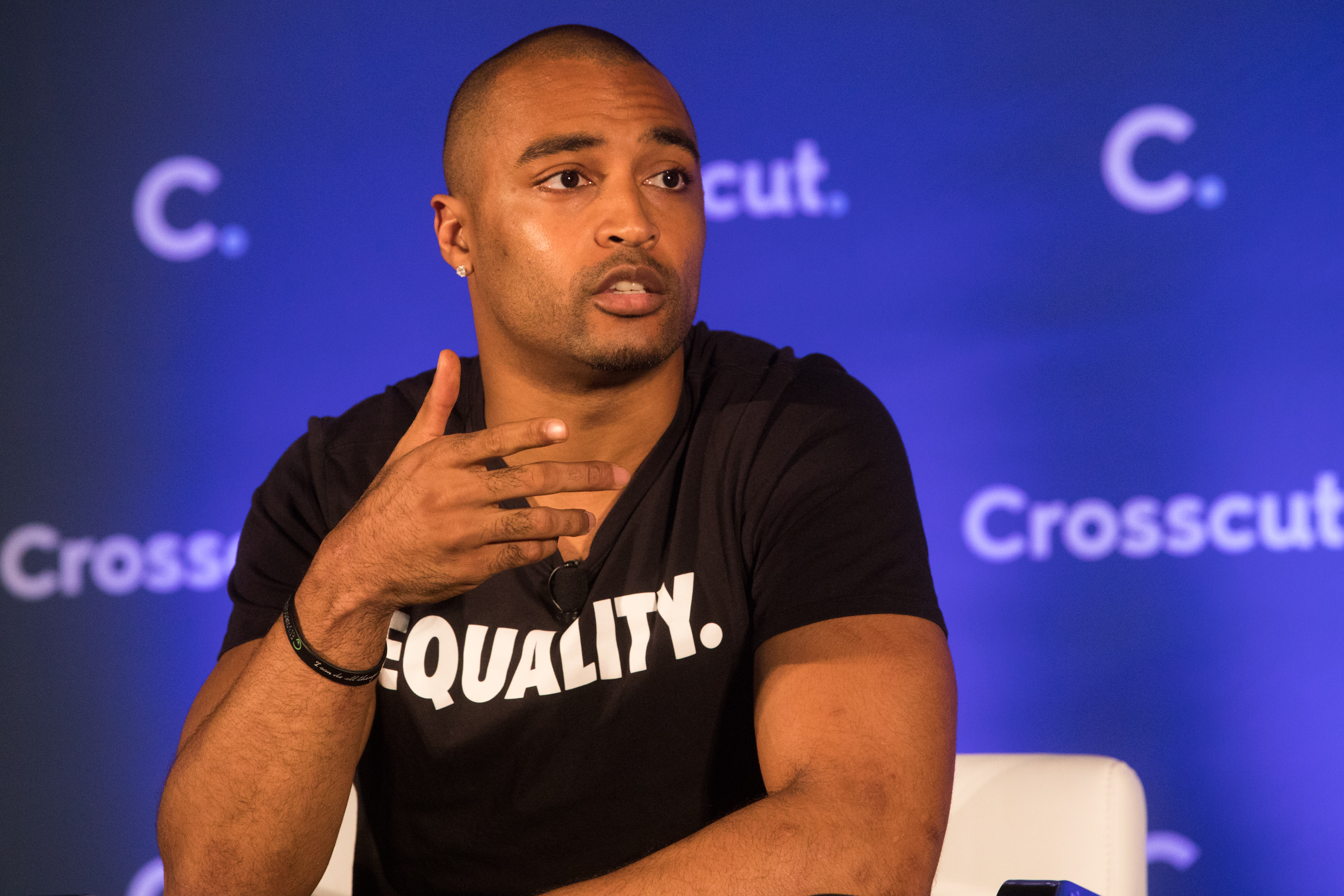 Doug Baldwin speaks during a conversation with DeRay Mckesson and Macklemore inside Seattle University's Redhawk Center at the Crosscut Festival in Seattle, May 4, 2019. (Photo by Sarah Hoffman/Crosscut)

“I hate this question,” he snorted on Saturday at Seattle University.

So began the creeping sensation of an oh-(crap) moment that sometimes accompanies the current and maybe soon-to-be former Seattle Seahawks receiver. A moment when, like the Hulk erupting out of Bruce Banner, you get the familiar, though menacing persona known as “Angry” Doug Baldwin. And he’s about to put everybody and everything on blast.

His interrogator was DeRay Mckesson, the civil rights activist who hosts the podcast Pod Save the People. They were at a Crosscut Festival panel with Seattle rapper Macklemore, discussing the use of celebrity platforms for social justice.

Mckesson’s was a fair question, given the historic reluctance of professional athletes to wade into social activism, albeit a tide that seems to be turning. And it was a timely discussion, given the questions swirling about the future of Baldwin’s tenure as an NFL player.

I’m personally hoping that Baldwin’s professional football career has ended at eight seasons, all in Seattle. It’s not that I haven’t enjoyed watching him play. I’ve been entranced by his abundant feistiness, his uncanny body control and his burst off the line of scrimmage, which have led to two Pro Bowl selections, two Super Bowl appearances and a league touchdown reception title.

But oh how I love hearing Baldwin roar. He has collected many chips – from going undrafted out of Stanford to being labeled a “pedestrian” receiver – and worn them not on his shoulder but atop his helmet, like the tip of a spear that has ripped through anyone and anything daring to attempt impeding his progress.

As an active citizen, father and person of color, I want that Doug Baldwin on my side. His is a profession in which “take off his head” isn’t just a battle cry, it’s a tactic. More than ever, we need Baldwin’s head, and everything inside.

I’ve never met Baldwin, but I know him. He is half Black and a quarter Filipinx, just like my goddaughter, Mariesa. During my sportswriting career, I covered one year of NFL football, that being the final season for Steve Largent, a receiver who ended up in the Hall of Fame, as well as Congress. I also was close to similarly misunderstood star athletes, like Gary Payton of the Sonics, who profiled as mollusks, their hard exteriors concealing gooey insides swimming with thoughtfulness and generosity.

Just as Baldwin on Saturday urged the audience to actually pay attention to the lyrics in Macklemore’s tunes, I implore people to hearken the words that pass through Baldwin’s often-pursed lips.

“All I’ve been doing the last four years is having conversations,” he said, “and with white people who look at me and say, ‘I’m not racist, I have Black friends.’

“That clearly makes you not racist,” Baldwin said sarcastically. “But the fundamental thing we as human beings can do is treat other human beings like human beings.

“If you could just take a minute and think, ‘What does this person want, what does this person value, who is this person?’ And then you start to ask yourself, ‘Well, who the hell am I?’ It doesn’t matter your skin color. It doesn’t matter where you’re from. Love’s a universal language. If you treat people with care, with dignity, sincerity and genuineness and love, you’ll get to the core of the issues. And the core of the issues is that we think in silos. We don’t look at each other as human beings, people who inhabit this earth together. So (bleep) the questions about what athletes can do, what entertainers can do. What can we do collectively?”

Maybe the rest of us can elect Baldwin to some public office, where we can put his instinct for healing to good use.

A few days ago, I asked Denis Law, the mayor of Renton, about Baldwin’s political prospects. He has worked closely with Baldwin for years, mostly on Family First, a state-of-the-art community center in the Cascade/Benson neighborhood. Baldwin in fact received the Martin Luther King Medal of Distinguished Service from the King County Council last year for that work.

Renton, where Baldwin and many of his teammates live, is one of a rising number of majority nonwhite cities in the U.S. Its struggles and metamorphosis provide an apt launching pad for Baldwin, who is from Gulf Breeze, near Florida’s border with Alabama and Mississippi. As the saying goes, the farther north you go in Florida, the more South you get. Baldwin recalled Saturday a newspaper photo showing his mother shouting over a fence at Ku Klux Klan leaders.

“I think he would be an excellent politician,” Law says. “He is very smart, genuinely personable, articulate, collaborative and tremendously passionate. I see him in Congress.”

Baldwin might have to smile a little more to get there.

“I know that I come across as abrasive,” he said in an unprompted riff on self-awareness. “I know that. My wife lets me know every day. I’m not an asshole; I’m just passionate about the things I care about.”

During his panel, Baldwin portrayed football as a fading driver of his passions. Most athletes just come with an expiration date, and his may have come at 30 years old. The success he’s helped the Seahawks achieve has resulted in extra games, during the playoffs, each exacting an extra toll on his body. Last year, he missed a few games — three — because of injuries. But he has undergone at least three surgeries this offseason, on his shoulder and knee and for a sports hernia.

And another clock is ticking for Baldwin: He and his wife, Tara, are expecting their first child, a daughter. It’s just time. Let’s point Baldwin and launch him at something closer to an actual atrocity than a blown call in a football game.

I’m rooting for Doug Baldwin Jr., the Stanford-educated son of a Black police officer and half-Pinay activist from the South. I’m rooting that he is able to walk away from the NFL, without a limp and with his brain cells unscrambled. That would be a win for all of us.