A new Washington state law will remove and replace Electoral College members who go rogue. But the courts will get the final say. 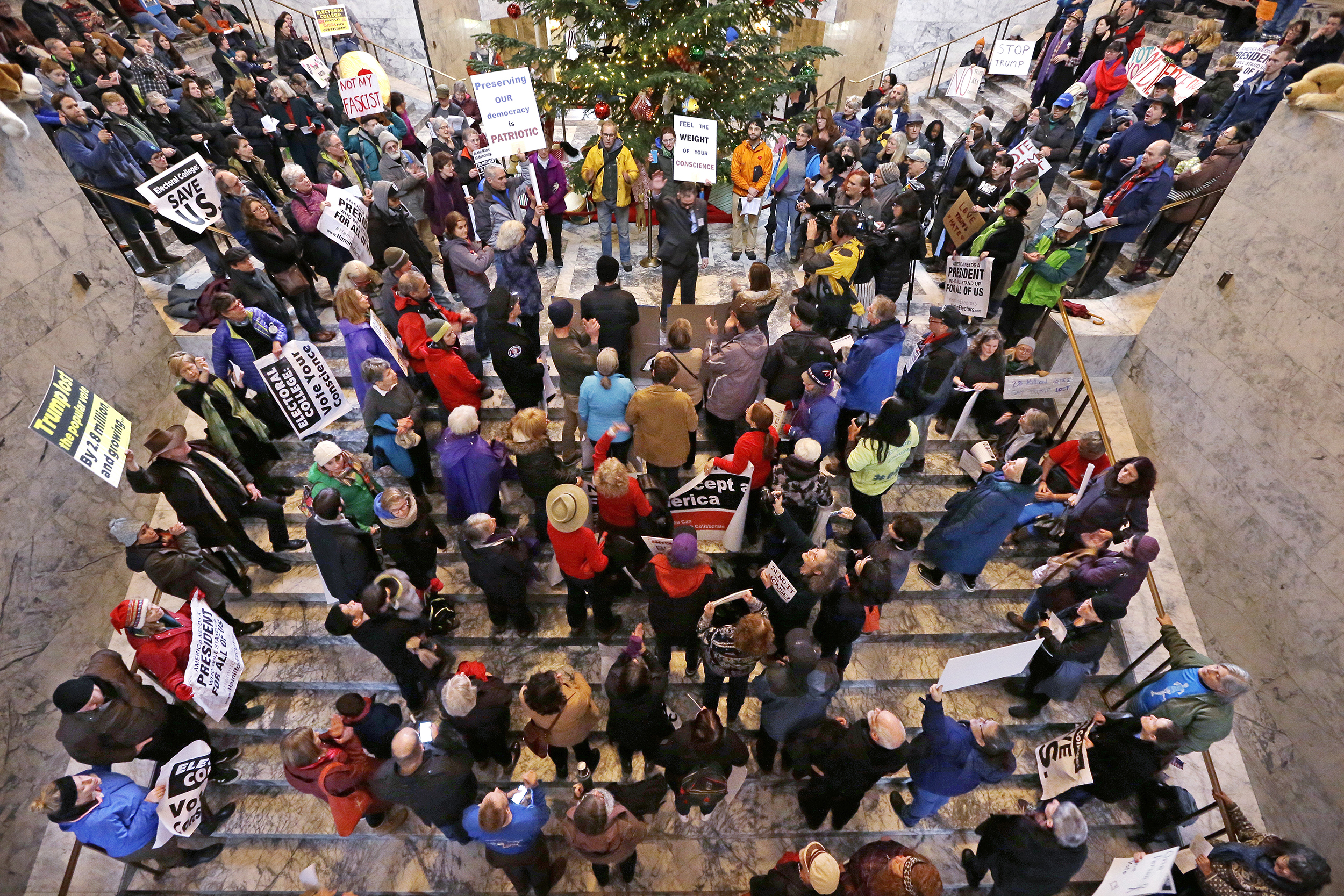 Bret Chiafalo thinks the Electoral College, which the United States uses to elect the president and vice president, is inherently undemocratic. But as long as the institution exists, says the former presidential elector, it should at least serve a purpose: as a final safeguard to prevent an unqualified person from going to the White House.

Yet that’s the kind of last-ditch effort a new law in Washington aims to prevent. Senate Bill 5074, which Gov. Jay Inslee signed into law last month, will immediately remove and replace any Washington state presidential elector who refuses to cast a ballot for the candidate who won the statewide popular vote.

In 2016, Chiafalo was one of those so-called “faithless electors.” The 40-year-old from Everett joined two other Democratic electors from Washington state, Levi Guerra and Esther John, in declining to cast their vote for Hillary Clinton in a longshot attempt to deny Donald Trump the presidency.

In the end, their plan didn’t work. Nationwide, only seven of the Electoral College's 538 members cast ballots for alternate candidates who were not their party’s presidential nominee.

Yet Chiafalo, Guerra and John are still fighting their case in court, arguing the constitution gives presidential electors the right to vote their conscience and choose another candidate instead. A similar case from Colorado is also working its way through the court system.

The ongoing legal debate means Washington lawmakers still haven’t had the last word, said Lawrence Lessig, a Harvard law professor who has represented the three Washington electors in court. The Washington electors’ case, which the Washington state Supreme Court has yet to rule on, challenged Washington’s earlier law, which fined electors $1,000 if they didn’t cast an Electoral College ballot for their party’s nominee.

In an email this week, Lessig said Washington’s new law suffers from the same legal infirmities as the old one.

"I do believe that law is unconstitutional," Lessig wrote. "But whether it is or is not will be decided by the two cases that are currently working their way to the United States Supreme Court. However the Court decides those cases will determine the rule for this law."

The Colorado case more directly addresses whether states have a right to replace Electoral College members who won’t support their state’s popular-vote winner. One of the parties in that case, Michael Baca, was removed as a presidential elector in 2016, when he said he wouldn’t vote for Clinton. That’s exactly what Washington’s new law prescribes if another round of faithless electors crops up in 2020.

State Sen. Patty Kuderer, D-Bellevue, said that, so far, the court rulings in both the Washington and Colorado cases support the state's ability to bind Electoral College members' votes to the state’s popular vote. She said doing so is important to "ensure the will of the voters of this state will be honored."

"If we allow electors to have discretion, we have effectively reduced the pool of relevant voters to 538, because they are the only ones who matter," said Kuderer, the prime sponsor of Washington's new law. "I don’t think that’s what the Constitution ever intended."

That’s precisely the disagreement that Lessig and Chiafalo say the courts need to sort out. Lessig said a previous Supreme Court case, Ray v. Blair, affirmed that states can ask electors to sign a pledge saying they’ll support their party’s nominee. Yet the case did not address whether the state could actually compel electors to follow through with that pledge. “It expressly reserved the question [of] whether the state could make the pledge enforceable,” Lessig wrote.

In the United States, of course, voters don’t elect the president and vice president directly. Instead, on Election Day, voters choose a slate of electors that will represent them in the Electoral College.

In Washington and other states, the political parties choose or nominate presidential electors in the months leading up to the presidential election. Because Hillary Clinton won 54 percent of the popular vote in Washington state in 2016, 12 Democratic electors — including Chiafalo, Guerra and John — were called up to participate in the state’s final Electoral College vote.

That Electoral College meeting in December 2016 is when Chiafalo, Guerra and John decided not to cast ballots for Clinton. They instead awarded their Electoral College votes to former Secretary of State Colin Powell, a Republican.

Chiafalo said he did so not to slight Clinton, but instead in the hope Republican electors in other states might follow suit, thereby denying Trump the number of electoral votes he needed to become president.

"When I became an elector, I did a bunch of research, and I realized there was an extra reason they created an Electoral College — to stop a demagogue or someone who is unqualified," Chiafalo said this week. He said he considered that "a constitutional responsibility" he could not shirk. While Chiafalo supported Vermont Sen. Bernie Sanders in the 2016 Democratic primary, he said he voted for Clinton in the general election.

A fourth presidential elector from Washington state, Robert Satiacum, also declined to vote for Clinton, but wasn’t part of the same movement as Chiafalo. Satiacum, a citizen of the Puyallup Tribe, said he couldn’t bear to vote for Clinton for president because she didn’t represent his values, particularly on environmental issues. He instead cast his Electoral College ballot for Faith Spotted Eagle, a Native American elder.

Satiacum is not part of the case now before the state Supreme Court. Still, in an interview this week, Satiacum objected to the idea that his action went against the will of the people, as Kuderer’s comments suggested.

A majority of Democrats who participated in Washington’s 2016 presidential caucuses supported Sanders to become the party’s presidential nominee. By sweeping the caucuses, Sanders won 72 percent of the state’s delegates to the Democratic National Convention that year. Satiacum was one of the Sanders delegates who attended the convention.

"I feel then in defining the will of the people, it’s got to be the people that go to those caucuses," Satiacum said this week. He noted delegates at Washington’s state Democratic convention also endorsed Sanders for president, though that vote was symbolic and didn’t affect the primary results.

Satiacum said he didn’t think Washington lawmakers considered the issue carefully before passing Kuderer's bill. He said he felt as if the legislation was a petulant response to the state’s four faithless electors from 2016.

"It was like, ‘We didn’t get our way last time, now we are going to make sure this doesn’t happen again,'" Satiacum said.

The measure to replace future faithless electors passed Washington’s Legislature mostly along party lines, with the majority of Democrats voting yes and most Republicans voting no.

Opposing the legislation on the Democratic side were Rep. Sharon Tomiko Santos of Seattle, Rep. Brian Blake of Aberdeen, and Sen. Bob Hasegawa of Seattle. Among conservatives, GOP Sen. Brad Hawkins of East Wenatchee voted in favor of the bill, as did Sen. Tim Sheldon of Potlatch, a conservative Democrat who caucuses with Senate Republicans.

State Sen. Mike Padden, a Spokane Valley Republican who was Washington state's first faithless elector, was among those opposing the measure. Padden, who in 1976 cast an Electoral College vote for Ronald Reagan instead of then-President Gerald Ford, did not respond to a request for comment this week. (Democratic candidate Jimmy Carter won the 1976 election.)

Kuderer acknowledged that if the U.S. Supreme Court ends up siding with the faithless electors, it could make Washington’s new law “null and void.” At the same time, Kuderer — an attorney herself — said she doesn’t think that is very likely.

More than half of states already have laws on the books that try to bind presidential electors' votes, according to the National Conference of State Legislatures. Since 2011 alone, five other states have passed laws nearly identical to the one Washington legislators just approved. They are Indiana, Nebraska, Montana, Nevada and Minnesota.

"For the citizens of the state to have their votes nullified by one person's decision, well-intentioned or not, I think really does a disservice to democracy," Kuderer said. "And that’s why you are seeing other states pass this law."

How long it will take the faithless elector cases to proceed through the court system remains unclear. Lessig said no matter how the Washington state Supreme Court rules in the case involving Chiafalo, the decision will undoubtedly be appealed.

During oral arguments in January, Washington justices did not indicate when they might issue a ruling.