Free college is coming for WA families making under $50K

A new plan approved by the Legislature will soon provide free tuition to low-income families — guaranteed. 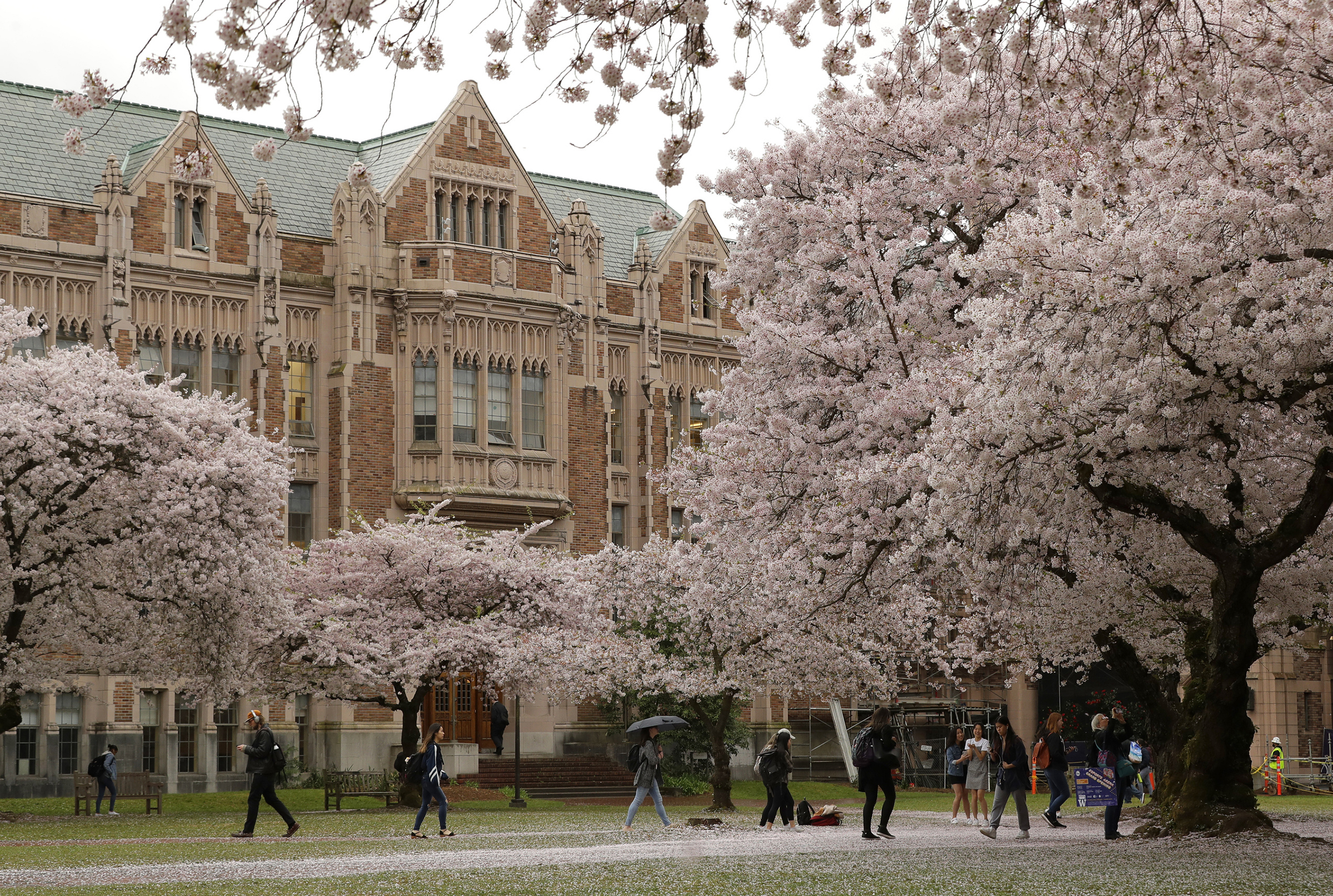 Students walk between classes near blooming cherry trees on the University of Washington campus, April 3, 2019, in Seattle. (Photo by Ted S. Warren/AP Photo)

For years, Washington state has failed to fully fund its financial-aid program for low-income college students. This school year, about 18,000 people qualified for Washington’s State Need Grant, but didn’t get an award because of the program’s limited budget.

That is now set to change. Not only did Washington lawmakers approve a plan to fully fund the college grant program, eliminating the wait list over the next two years, they’re expanding who qualifies — and making the awards guaranteed.

The expansive higher-education plan the Legislature approved last month will make college tuition free for families making up to 55 percent of the state’s median family income, or up to $50,400 for a family of four. The plan will do so by creating a dedicated account for college and workforce-education investments, paid for by an increase in taxes on certain professional service businesses, as well as on high-tech companies.

“The investments in this bill are going to transform lives and the competitiveness of this state,” said Palumbo, who chairs the Senate Higher Education & Workforce Development Committee.

More middle-income families will receive partial awards under House Bill 2158, which Gov. Jay inslee is expected to sign into law later this month. Under the legislation, families making up to the state’s median income — $91,766 for a family of four — will qualify for at least some level of award.

Both the low- and middle-income eligibility changes are set to take effect in fall of 2020.

By contrast, under past policy, State Need Grants were available only to those making up to 70 percent of the state’s median family income. Students qualified for the maximum award only if their family earned 50 percent of the median income or below.

“We just opened up opportunities for thousands of families who might have thought college and apprenticeship programs were out of reach,” said state Rep. Drew Hansen, D-Bainbridge Island, the bill's prime sponsor and the chair of the House College & Workforce Development Committee.

By comparison, only 68,205 students received State Need Grant awards of any amount in 2018.

The awards won’t be limited to recent high-school graduates or full-time students, either. Instead, the financial aid program will be open to those who may want to get a bachelor’s degree for the first time, no matter their age.

Growing the college financial aid program is expected to cost the state about $186 million over the next two years.

The plan will also spend about $17 million through 2021 to increase enrollment spots at the state’s four-year universities. That money will go toward adding capacity in high-demand programs, such as nursing and engineering. Another $21 million will go toward expanding the medical school at Washington State University.

Meanwhile, the state's community and technical colleges will receive more than $90 million over the next two years to help pay instructors in high-demand fields, as well as to provide targeted guidance counseling to help students graduate.

In recent months, Microsoft President Brad Smith and University of Washington President Ana Mari Cauce have emerged as two of the plan’s biggest champions, along with leaders of the state's community colleges.

The plan had its share of critics in the Legislature, however, primarily due to the taxes that will pay for it. The legislation will increase business-and-occupation tax rates for certain service businesses that rely on a highly educated workforce. Architectural firms, law offices, medical practices, engineering firms and software companies are among the businesses that will see their tax rate increase from 1.5 percent to 1.8 percent.

All together, the business tax increases are projected to raise about $376 million over the next two years, to be deposited in a separate account for higher education and workforce programs.

State Rep. Drew Stokesbary, R-Auburn, said part of his concern is that a large group of businesses will pay the tax increase — not just big tech companies like Microsoft, which he described as “the poster child” for the plan.

In particular, he and other Republicans expressed concerns about how the increased business tax would affect physicians, something they said could contribute to increased health care costs.

“We spend all this time trying to solve health-care affordability, and then we are going to raise the tax on physicians and health care providers,” Stokesbary said. “That’s only going to make the problem worse.”

Statewide, about 82,000 businesses are expected to pay the increased business taxes, according to House staff.

State Rep. Gael Tarleton, a Seattle Democrat who chairs the House Finance Committee, said that amounts to “a very small percentage” of businesses throughout the state.

At the same time, businesses across Washington state will benefit substantially from having a better-educated workforce in the future, she said.

“I am really proud that the vast majority of our businesses and employers said ‘yes,’ that they didn’t fight it," Tarleton said, "Because they recognize it as something that benefits all of us in the long run."

Palumbo, the Senate higher education committee chair, said it is important for the state to identify a dedicated, sustained funding stream for college and workforce investments, given the state's history of cutting those programs during economic downturns. Higher education "is always the first thing to get cut in a recession,” Palumbo said.

Joe Dacca, UW’s director of state relations, said the university is still reeling from the cutbacks it endured around the start of the decade. Right now, he said, the UW can't serve the growing number of Washington students who want to study science, technology, engineering and mathematics (STEM).

The new state investments should help address that problem, he said.

About $10 million over the next two years will be used to increase enrollment slots in STEM programs at the UW's Seattle and Bothell campuses, he said, as well as to start new civil engineering and mechanical engineering programs at UW Tacoma.

"This will mean hundreds more slots for Washington students to study in those programs," Dacca said.