How do Seattleites feel about growth? Depends when they got here, says poll

A new Crosscut/Elway Poll finds that newcomers are more likely pro-Amazon, while longtime residents are more inclined to feel left behind. 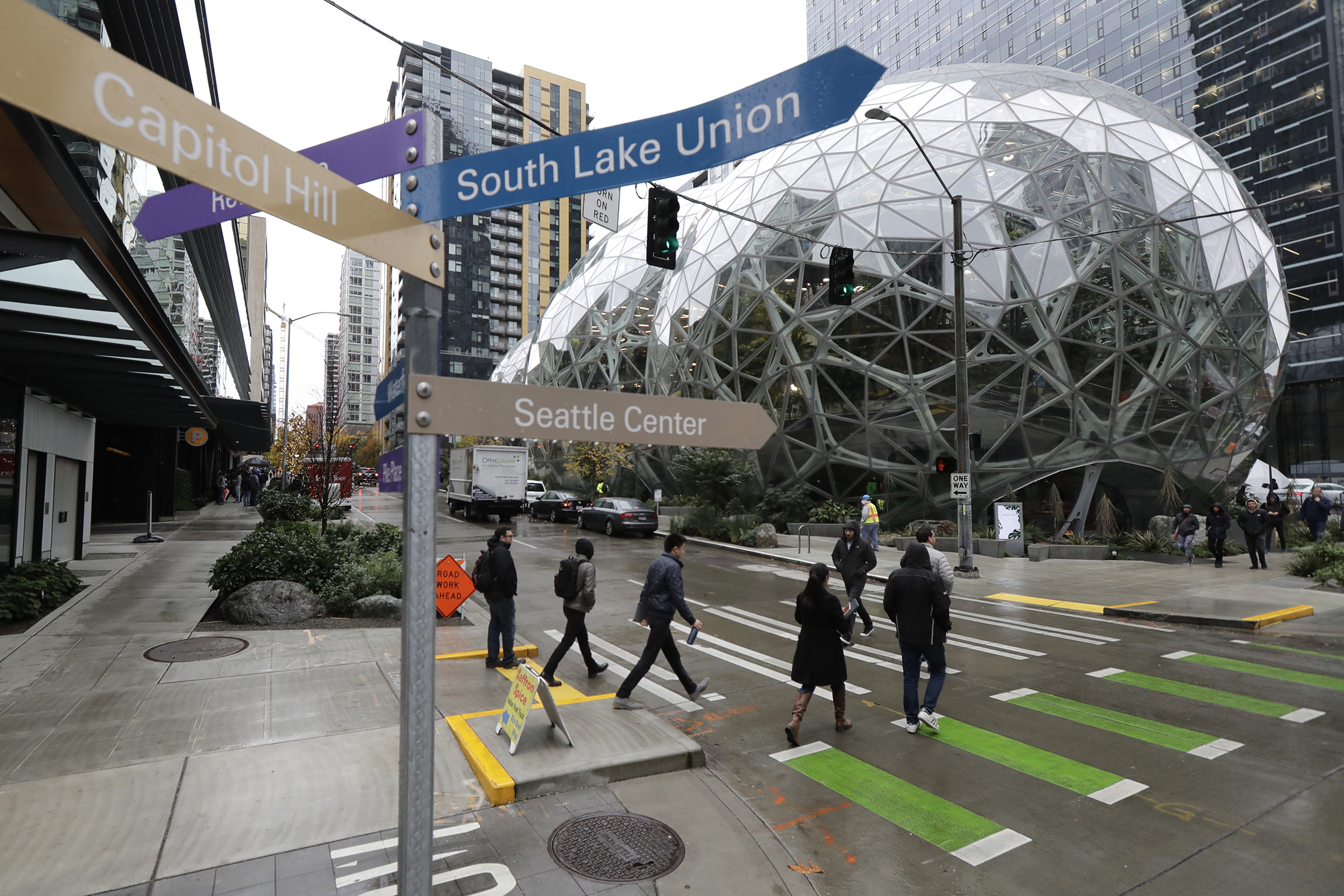 In this Nov. 9, 2018, photo, pedestrians walk near the Amazon Spheres in downtown Seattle as a sign points the way to the city's South Lake Union and other neighborhoods. (Photo by Ted S. Warren/AP)

Seattle’s explosive growth can be a sore subject. Traffic is miserable more often than not. The homelessness crisis can feel intractable. Housing costs have soared to painful new heights. And in the public conversation around the issue, the loudest voices tend to get the most airtime for their black-and-white takes — with one side painting a grim picture of a destroyed Seattle barely worth staying in, while the other makes it sound like growth can only be a good thing.

“If you just read the comments sections in the media, you would think there is a civil war going on for the soul of Seattle,” said Elway Research President Stuart Elway.

In the run-up to this fall’s Seattle City Council election — which will be, in part, a referendum on how city officials have dealt with the growth — those loudest voices are likely to keep cranking up the volume. But loud isn’t necessarily representative, and we wanted to get a better sense of how Seattleites view their changing city. So, for the latest Crosscut/Elway Poll, we asked 400 residents about the good and the bad of Seattle’s growth. The broad takeaway is that residents don’t necessarily see change as good, but still largely feel good about their home.

“There is a category of people who are pretty unhappy, but as we see in our survey it’s not as large as it might seem,” said Elway. “Most people in our survey are generally satisfied. They see some problems, but like it here, feel they belong and plan to stay.”

Has growth made the city and your neighborhood better or worse?

Rather than divide respondents by their political affiliation or geographic location or some other demographic signifier, the sample was dictated by how long people lived in Seattle. Crosscut and Elway set out to answer whether longtime residents have drastically different feelings about the changing city than the newcomers who are helping to change it. Does someone who has been here five years value something about Seattle that a resident of three decades finds frivolous? Does a longtime homeowner hate Amazon more than a new renter? Who feels that they belong in this “new” Seattle?

There was a lot more agreement in the survey than you might expect. The newcomers and longtime residents surveyed were equally likely to rate Seattle as a positive place to live, with 69 percent of residents here 10 years or fewer saying they view the city favorably and 68 percent here 11 years or more saying the same.

Both newcomers and longtime residents cited the environment and access to nature as the top reasons for living in Seattle. Across the board, people said the positives of growth include better jobs and economic diversity, better restaurants and improved transit, while new and old residents alike agree that the top problems caused by the city’s growth are homelessness, traffic, and a rising cost of living.

There was some widespread consensus about quality of life in Seattle and a sense among a majority of respondents that the quality is diminishing as the city grows. But the poll found that those who have lived here 10 years or fewer were a bit more optimistic about the direction things are headed and more likely to feel like they belong in Seattle.

Poll respondent Sarah Bland is one of those longer-term residents who has a glass-half-full view of Seattle’s growth. She moved to Seattle with her husband and daughter in 2010 because the job opportunities were much better than in the Olympia area.

“There are jobs everywhere,” said Bland, an administrative assistant at University of Washington. “At UW, for example, there are jobs from scientist to administrative staff to maintenance staff. It’s amazing. Seeing that broad range of employment opportunity makes me feel like it can only get better and people can have upward mobility if they’re taking advantage of it.”

Bland and her family currently rent an apartment in Queen Anne, a far cry from 19 years ago, when she was homeless in Olympia. That was an experience that she said helps her appreciate the economic engine driving Seattle’s growth.

Bland recognizes there are downsides to the boom as well. Buying a house is well out of her family’s reach, homelessness is a huge problem, and she thinks the city is failing to build enough housing that its lowest-income residents can afford. Still, she said, “both me and my husband are able to have good-paying jobs that even in this high-cost city means we can afford to … live comfortably.”

Kristine Hassell is one of those somewhat rare longtime residents who took the survey and think both the city and their neighborhood are getting better. Hassell, a Filipino-American and former Houston resident, said she often struggled to find ingredients that she needed to cook her favorite dishes when she moved to northwest Seattle 12 years ago. These days, Hassell said, “My neighborhood is becoming the mini-International District of the north. You want soft tofu Korean soup? No problem. You want boba tea at midnight? You got it.”

Coming from a very diverse city like Houston, Hassell was at first a bit shocked by Seattle’s whiteness when she moved here in 2006. As the years have gone by, she said, “I’m finding little pockets of diversity around town and I’ve seen better diversity on the streets of the neighborhood.”

Disparities in outlook appeared again in a question asking whether respondents feel a sense of belonging in the city. Asked if they agree with the statement “I belong in Seattle,” 78 percent of respondents who have been in Seattle 10 years or less said they agreed compared with 68 percent of those here 11-plus years. The differences are starker when you further break out how long someone has lived here. Respondents in Seattle for 6-10 years were the most likely to agree with the sentiment that they belong, with 80 percent saying so. Just 66 percent of people here for 21 or more years felt like they belong.

A similar disparity emerged when respondents were asked whether their values lined up with Seattle. Sixty-four percent of newcomers said they felt that their values aligned, compared with 53 percent who have been in Seattle for more than a decade. Amazon, often cited as a catalyst for a number of Seattle’s livability issues, is seen more favorably by respondents who have been here a decade or less, with 54 percent saying the tech giant has had a positive impact. Only 40 percent of longtime residents viewed Amazon positively.

Bruce Saari, a West Seattle resident who has lived in Seattle since 1992, feels that newcomers — many of them brought here by the “Amazon influx,” he said — aren’t the “true” Seattleites who have lived here for a long time. “There’s a quirky attitude that used to define Seattle. It’s laid back, being friendly to your neighbors, helping people without question. That kind of feeling has been lost and it’s hard to find those kinds of people anymore,” he said.

And though Saari thinks growth has been a negative for his neighborhood and that newcomers are killing Seattle’s quirky culture, he feels strongly that he belongs in the city and that its values match his. Still, Saari’s assessment is that, “We grew too fast.”

Adam Rakunas takes issue with the notion that newcomers don’t fit in here. He said he volunteers with his daughter’s school, helps out in his community, and says “Hi” to his neighbors.

“If you start going to meetings all the damn time, you can start to say you belong to your community,” Rakunas said. “You see people in the comments who say things like, ‘My family has been here for four generations and these newcomers don’t belong.’ If you’ve been here that long, what have you done to make the city better? I’ve given enough sweat equity to our school community and local community that I belong here.”

So what lessons can be drawn from all those numbers?

“If you’re outside of Seattle, people have this image of the city as a congested, socialist hellhole that they might come to for a Mariners game, but can’t get out of town fast enough afterwards,” said Elway. “If you do live here, you think things are generally pretty good.”

Stuart Elway and Josh Cohen will be leading a lunchtime discussion about this poll titled Parsing the Poll at the Crosscut Festival on Saturday, May 4, at 12:30 p.m. More information on the festival, including a full list of speakers and a schedule of session, can be found here.

The sample for this survey was selected from a combination of several panels of prescreened participants plus a random sample of registered voter household in the city of Seattle. Participants were contacted via email or text and invited to take the survey online. The data were collected April 14-20, 2019. Because of the nature of the sample, no margin of sampling error can be calculated. The survey was conducted by Elway Research, Inc.