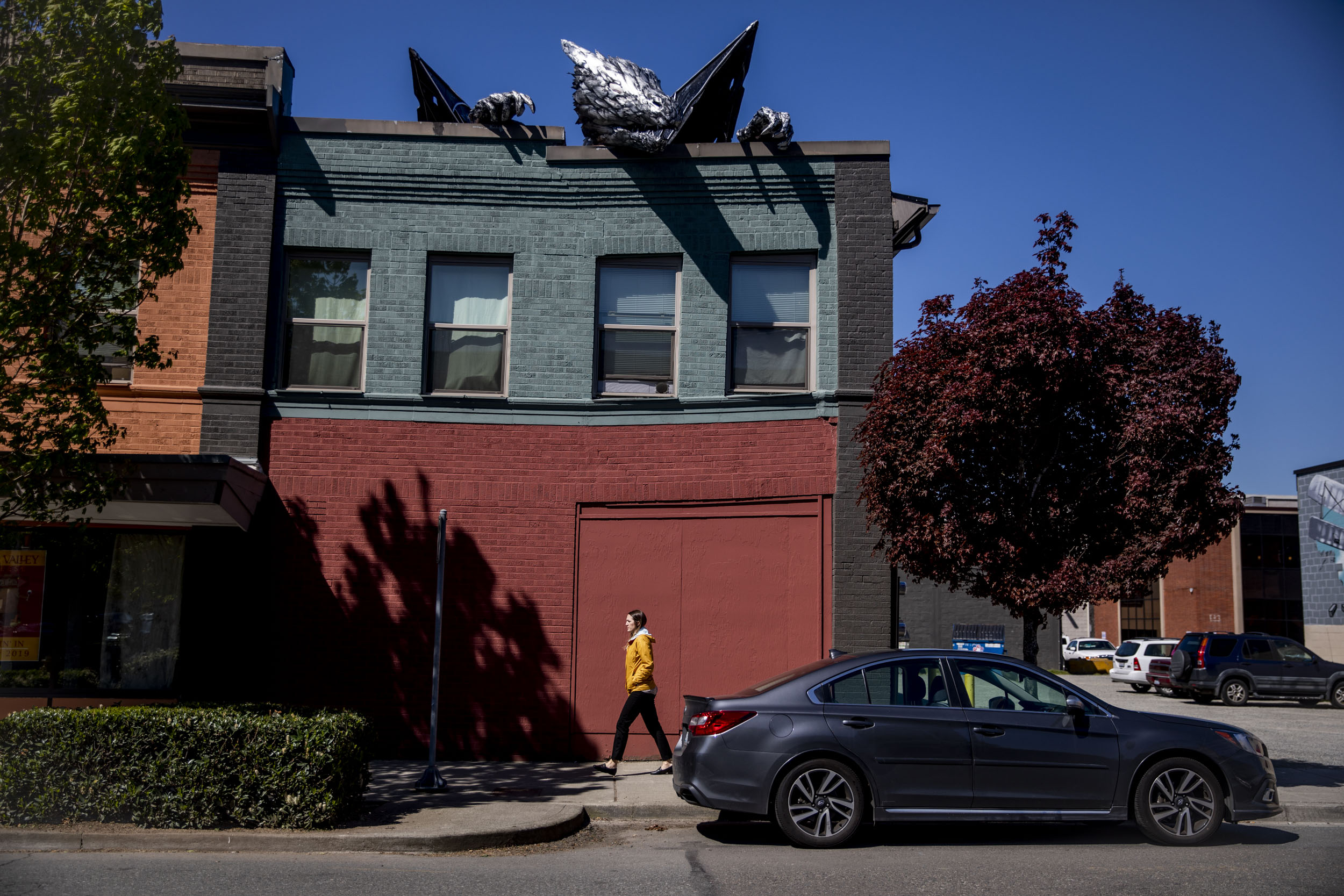 A woman walks under a dragon, designed by Marsha Rollinger, perched on top of a building in downtown Renton on April 29, 2019. (Photo by Dorothy Edwards/Crosscut)

Lurking atop a yellow, green and red brick building, a legendary beast with glowing eyes peeks its head over the edge. Its talons grip the structure, its wings in position to sprawl as if the creature is ready to soar over the city.

Of all places a silver dragon could have perched, it makes sense that it landed here in downtown Renton.

The dragon’s arrival coincides with the Dungeons & Dragons exhibit just a couple of blocks away at the Renton History Museum. While both beast and show are related to fantasy, their arrivals are by happenstance.

Allison Moore who guest curated the D&D exhibit called it a “serendipitous” turn of events.

“I think it will be a cool way to show the importance that fantasy, gaming and those kinds of topics have in Renton,” said Moore, a museology master’s candidate at the University of Washington. She pitched the exhibit a year ago to her professor, Sarah Samson, who is also the curator at the Renton History Museum.

A little research about Renton revealed to Moore that the city is home to the headquarters of Wizards of the Coast, known for the popular card game Magic the Gathering and for buying the company behind the ubiquitous D&D in 1997. D&D, a tabletop role-playing game that’s been around since 1974, is widely credited with spurring the innovation of modern role-playing games.

Originally from Atlanta, Georgia, Moore fell in love with D&D as a child while watching her older brothers play in the basement. They said she could watch as long as she didn’t talk, Moore recalled. They would later teach her how to play when she was in middle school.

To play D&D, a group of people create characters and act out their roles. Characters can be anything: from a 300-year-old witch elf to a playful halfling bard or an introverted nature-wielding orc. Players then follow a story guided by a dungeon master. Imagine playing a video game with friends, minus the technology and using only imagination.

“When you’re playing, all you really need is dice, paper and people,” Moore said. “So you kind of sit around a table and tell a story.”

The museum show, “Hero’s Feast: Finding Community Through Dungeons & Dragons,” features 50 artifacts, most of them donated by community members. The exhibit includes first and second editions of the original D&D rule book, character sheets, explainers on how to play the game, and a display of a battle scene with miniatures painted by J.D. Wiker, a former game designer at Wizards of the Coast.

“I was prepared to have to do a lot of convincing people to help me, but the moment they found out what was going to be in their local history museum I got so much support,” said Moore.

One generous D&D player even donated a character binder with 20 years’ worth of role-playing backstory.

“Fantasy always has this unique ability to be extraordinary in ways not a lot of other genres have,” Moore said. “I do remember from one of my interviews someone told me their favorite thing about D&D was that it was the only place in their life they felt they could be a hero.”

In her proposal to the Renton History Museum, Moore said she cited the huge revival D&D is having for why it would be relevant.

Critical Role, a web series where famous voice actors play D&D, has nearly 500,000 followers and the Twitch.tv channel, where people live stream themselves playing games, D&D has more than 100,000.

“These people in fantasy novels or TV shows or the ones you create in your games — they feel very real. They’re very relatable, but they can go save the world and slay the dragon and I think that level of control can be really nice for people — to have that ability to take control in such a creative way,” Moore said.

Fantasy took hold of Renton on April 13, which happened to be when the world awaited the return of the wildly popular Game of Thrones HBO show.  Hundreds showed up at South Third Street and Wells Avenue to watch a dragon rise above the Old Western Hotel.

Back in 2016, Marsha Rollinger and Mitch Shepard, members of the Renton Municipal Arts Commission, were sitting at a cafe looking at the Old Western, a 109-year-old building that had been cracked from an earthquake. Rollinger joked about putting a piece of public art on top of the building to make it seem like that had been the cause of the damage.

Rollinger, a freelance art illustrator and consultant, subsequently pitched the dragon sculpture idea. She knew Renton had a connection to Wizards of the Coast and with its aviation industry, she thought a dragon would fit in nicely. She turned to Western Neon, the Seattle sign builders to fabricate an aluminum dragon that weighs more than 700 pounds, measures 8 feet long and has wings that are 15 feet tall. The dragon could easily be mistaken for Khaleesi’s beastly dragons in Season 4 of Game Of Thrones — a much younger Drogon, Rhaegal or Viserion.

The city approved the $101,365 dragon, funded through Renton’s One Percent for Art Program fund, according to Jessie Kotarski, the city’s economic development specialist.

Last month’s event was the official “lighting of the dragon.” More than 50 teams participated in a scavenger hunt. There was an early screening of Eye of the Beholder, an independent film documenting the artwork of D&D, and plenty of cosplaying. Renton City Councilmember Ryan McIrvin and his wife showed up as Game of Thrones’ Jon Snow (aka Aegon Targaryen) and Daenerys Targaryen.

It will remain permanently atop the two-story building on South Third Street that houses The Comic Hut. The dragon is named Erasmus, in honor of Renton’s founder, Erasmus Smithers.