How psychology can help us understand — and fight — poverty

By looking at the way people in poverty make decisions, UW research psychologist Crystal C. Hall hopes to dismantle the assumptions we make about them.

This conversation has been lightly edited for clarity.

I grew up in a family that was pretty solidly middle class, and maybe lower middle class. It was a situation where there wasn't a ton of excess, but I don't remember ever needing very much. I feel like I had a very happy childhood. And going to college was something that was always on my radar.

When I went to college [at Carnegie Mellon University], my intent was to do physics. I was one of, I think, two women in a cohort of about 40 people.

It was a really challenging experience, to put it lightly. I really liked what I was studying, but I just didn't have a vision of what my path would be, what I would do, what it would even mean to be a physicist. I didn't really know. And I hadn't really thought about that when I went to college.

I took a bunch of different classes, and I took a class on emotion and decision-making that really stuck with me. Finding psychology was really exciting because I found this place where I can still do science, and I can still be a scientist, but it was in a very different context. That was where I really got a sense of how you could do scientific research in a very different place that wasn't a lab of the same type [as in physics]. When I started looking at the intersection of psychology and public policy, I was immediately drawn towards social policy in general.

As I started studying all of this I was really struck by the fact that many of the people in positions of power were not people that looked like me. There were a lot of white men, and the way that they even talked about what it meant to be somebody living in poverty, or trying to understand the racial impacts of different types of policies, really struck me very early on as not being properly aligned in the way that I would have thought about that. I think that's part of what really drew me towards looking at questions around poverty and psychology early on.

I realized that very often in the world of public policy, the people that are making decisions about other groups are not members of those groups. And they're trying to understand: "What do people want/what do people need?" Psychology can be a way for us to shift the framing of some of those questions and try to ask the right question and consider solutions that are more appropriate for particular contexts.

I have done some work on self-affirmation as a tool for helping people cope with the stigma of poverty in particular. What we found is that people, in the right situation, were interested in learning more about free tax preparation. I think often the assumption is that people aren't aware of different programs with different policies that potentially could be beneficial. What our research suggests is that the stigma of poverty can be so overwhelming that it trumps shorter-term decisions that people might make, that might give them longer-term impacts.

That's something that happens to people because they're human, not because they're experiencing poverty, or because they are a member of some group. I think that type of research really helped me think about how more broadly we can consider this framework of the assumptions that we are making about how people behave under different circumstances.

We were inspired by some research that looked at similar questions with respect to race. It was showing that allowing someone an opportunity to engage in a self-affirmation task could decrease the racial achievement gap as measured by GPA comparing blacks to whites. We were interested if that could serve a similar function in the context of poverty.

We [did the research] in a soup kitchen. We had people tell us a story of when they felt successful or proud. We just asked them, "Tell us what caused it, how you felt, what happened afterward." They did it in a room alone, we had a tape recorder and they just recounted this briefly. Typically people took two or three minutes and they talked about something that had happened at work or they talked about their kids, and it was most important that people generated it for themselves.

I couldn't affirm someone else, and I couldn't just put someone in a positive mood. It was really important that people generated this on their own. So then, in the studies, we found that the positive impact happened for the people that had done that task versus the task that we thought was more neutral.

I was a Ph.D. student at [Princeton], going to a soup kitchen. And most of my dissertation data I collected in this way. The dynamic was really interesting because I was coming from this elite institution, but also being a black woman, I was someone people could identify with a little more. I worked with some collaborators on that project, and I was the only black woman on the team, so I think that it just gave me a very unique lens with which to approach the work.

I was doing something that these folks weren't used to doing on a regular basis, which was having someone listen to their experiences, and tell them about their lives. I think that the combination of those things made it really possible to do that work. 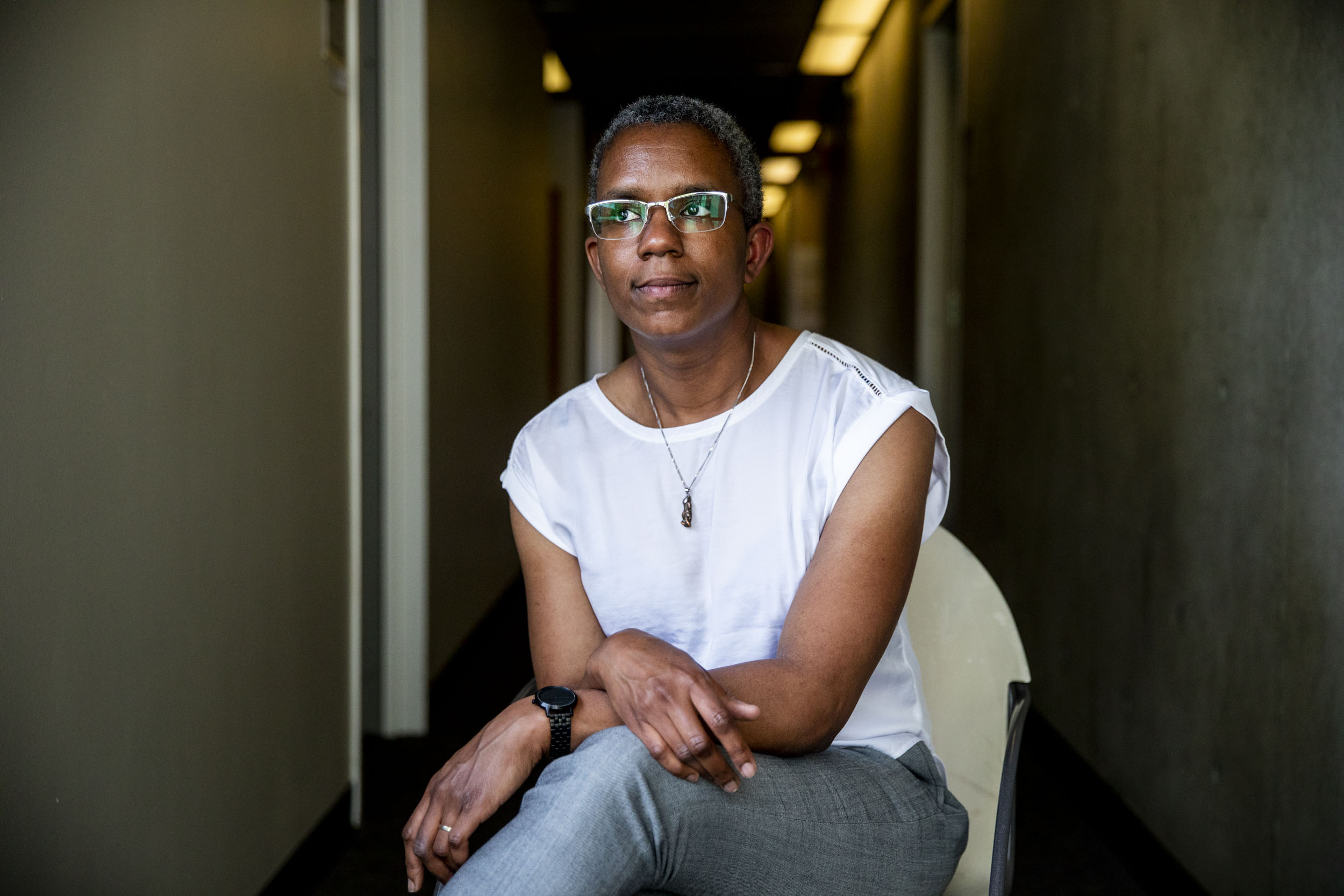 Crystal Hall at the University of Washington on May 6, 2019. Hall is an associate professor in psychology and specializes in social policy, public policy analysis, and social psychology. (Photo by Dorothy Edwards/Crosscut)

Crystal Hall at the University of Washington on May 6, 2019. Hall is an associate professor in psychology and specializes in social policy, public policy analysis, and social psychology. (Photo by Dorothy Edwards/Crosscut)

I was surprised at the extent to which we often judge the value and the impact of policies based on their outcomes without considering the implementation of those policies. For example, we can consider the impact of a housing subsidies by looking at: Where do people end up living? What outcomes do they experience? How does the way that somebody has to take up that voucher matter? How much does it cost people to move? Do people face discrimination in housing? There are a lot of other factors that might play into whether or not some policy is effective.

It is really easy for us as humans to look at the behavior of other humans and attribute that to something that is about their personality and preferences. And that's a big insight from social psychology more generally, is that we underplay the impact of the situation on other people’s behavior. When we look at the behavior of someone who is experiencing poverty or homelessness, we want to understand and attribute that to the decisions they made or misinformation they had, or problems they had.

I would argue that we need to think about "what are the conditions under which people are making those types of decisions, and how does that impact their behavior?" Because we are all driven so strongly by context in a way that we often don't even recognize. We want to own our decisions and we want to think that "I made that decision because that what I wanted and that was my preference." When we do that to other people, it's hard for us to understand the context that influences other people. It's much easier for me to think about the context that influences my behavior, but when I'm looking at someone else, especially someone who I may not be a member of their group, it can be really hard for us to take that into account.

I've done a lot of work trying to understand how psychology can inform the implementation of public policies and how different types of behavioral insights more broadly can have an impact. Most recently, I've worked with a team in Washington, D.C., formerly called the Social and Behavioral Sciences Team, which was a part of the White House during the Obama administration [and] now operates out of the General Services Administration — it’s called the Office of Evaluation Sciences. We take insights from psychology and think: How can we better understand the way that a policy or a program might operate? I've been doing that work for the last several years.

I think that one of the biggest misconceptions is that people often assume that they would be able to do better, with a similar set of constraints. I think it's really important for policy makers in particular to recognize that there are so many external factors that impact the decision-making of people living in the context of poverty.

A lot of them are very similar to the types of constraints that people that aren't as financially poor experience. So when you have to think about how you are going to eat next week, it's very hard to think about saving money for a rainy day, or saving for retirement, or even retiring in general. So all of those really short-term needs that people have to meet trump their ability to think about longer-term priorities.

I worked on the BIAS Project, which was funded by the federal Health and Human Services Agency, and it was looking at using behavioral insights for improving different types of social programs. One of the things I worked on [specifically] was a project that was being implemented in Washington state, trying to improve the rate at which incarcerated, noncustodial parents were applying to modify their child-support orders.

When someone is incarcerated, typically they have the option to decrease their child-support payment. These are typically fathers, and when you have a change in income, you can decrease your child-support payment. Most of the time, or at least very often, these folks aren't aware of the process, they don't know how to do it, and they can accrue a lot of debt. And then that debt can become problematic, not only for the child and for the custodial parent, but also when the noncustodial parent is re-entering the workforce. They often have a lot of debt that can have very long-term consequences.