‘It’s an issue of liberty’: WA will stop jailing kids who run away or skip school

Washington is an outlier when it comes to jailing kids for things that aren't crimes. A new law intends to change that. 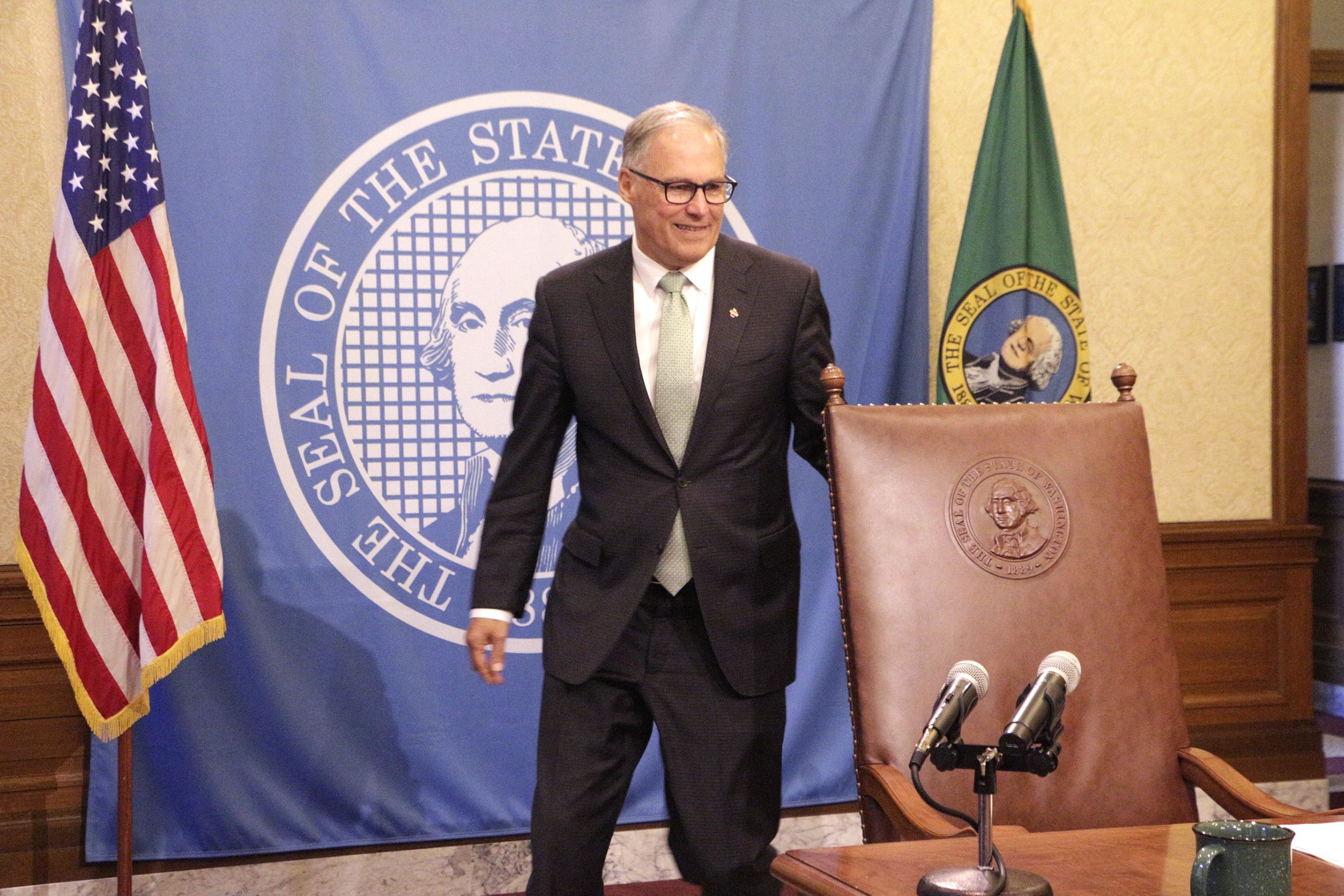 Washington Gov. Jay Inslee arrives to sign a slate of bills on Wednesday, May 8, 2019, in Olympia. (Photo by Rachel La Corte/AP)

For some time, Washington state has held a dubious distinction that defies its reputation as a progressive policy haven. According to federal statistics, Washington has been the nation’s longtime leader in jailing children for noncriminal offenses, such as running away or skipping school. Toward the start of the decade, Washington accounted for roughly a third of instances nationwide where kids were jailed for doing things that aren’t actually crimes.

But a new law Gov. Jay Inslee signed Wednesday will begin to phase out that practice, which research suggests can traumatize kids and actually worsen their behavior.

“This is consistent with research that shows incarcerating these youth is not effective, and in fact can cause more harm to these children,” Inslee said as he signed the bill into law.

Under Senate Bill 5290, Washington judges will no longer be able to put kids in a juvenile detention cell if they violate a court order to stop skipping school. That change will take effect in July 2021.

By July 2023, judges will similarly no longer be able to jail children who defy orders to stop running away from home.

A more immediate change, taking effect next July, will ban judges from sending foster kids to juvenile detention when they run away. Right now, that can happen in some cases involving foster youth, as well as with children who seek legal help to remove themselves from a bad home situation.

“First, it’s an issue of liberty,” said Annie Blackledge, executive director of the Mockingbird Society, a group that advocates for homeless children and foster kids. “We shouldn’t be putting anyone in jail for things that aren’t crimes.”

The new legislation revises a law known as the Becca Bill, which Washington’s Legislature passed in 1995. That law was named in honor of Rebecca Hedman, a 13-year-old runaway from Tacoma who was murdered in Spokane.

The idea behind the law was to help at-risk kids, with juvenile detention intended as a last resort. Over time, however, the Becca Bill became one of the main reasons why Washington judges were jailing truant kids and runaways more often than any other U.S. state.

Numbers the federal government released in 2014 show how greatly Washington’s practices departed from the norm. In 2011, for instance, Washington state jailed youth for noncriminal offenses 2,705 times, far more than any other state. The No. 2 state on that list, Kentucky, detained youth for noncriminal offenses only 1,048 times that year. More than 20 states reported that they didn't send truant kids or runaways to juvenile detention at all, according to the federal data. The U.S. Office of Juvenile Justice and Delinquency Prevention has since stopped posting that annual data online.

The state's own numbers show it has made some progress, which has coincided with a recent push to start handling more truancy cases outside of court. In 2017, statewide data shows that Washington judges jailed truants, runaways and other noncriminal offenders 1,540 times. Assuming other states' numbers haven't increased significantly, that figure still would put Washington at the top of the national list.

State Sen. Jeannie Darneille, D-Tacoma and the prime sponsor of the legislation signed Wednesday, said she began working to ban the practice years ago when she learned “what an outlier Washington was.”

“As we became aware of the fact that we are imposing trauma on children, we really needed to fix those conditions sooner rather than later,” Darneille said Wednesday.

Darneille said that because detention no longer will be an option for runaways and truants, the state can now focus on alternative programs, which she said are often much more effective at addressing children’s mental health issues, substance abuse problems or family conflicts. In many cases, effective interventions can include counseling, she said.

The move to eliminate detention of truants and runaways was not without controversy in the Legislature. Senate Minority Leader Mark Schoesler, R-Ritzville, was in office when the Becca Bill was originally passed. He said he remembers parents’ frustration back then when they learned how few legal options they had when their children ran away from home.

“There was nothing you could do about it,” Schoesler recalled Wednesday. He said he thought detention should remain available in certain cases, including for runaways that don’t have a safe place to stay.

“It’s not for every kid that runs away or is a problem, but you need that option, that tool, for certain kids,” Schoesler said.

State Rep. Noel Frame, D-Seattle, said previous progress was stymied, in part, by the fact that judges retained the option of putting noncriminal kids in detention. At some point, Frame said, detention became “not a tool, but a crutch.”

Despite having broad support among Democrats, who control both chambers of the Legislature, Senate Bill 5290 almost didn't pass this year.

Originally, the bill would have banned detention of noncriminal youth sooner. But to win support from certain key legislators, some of the deadlines were pushed back to allow more time for the state to explore and implement new alternatives to detention.

After being amended, the bill narrowly passed the state Senate 25-24 on the last day of lawmakers' 105-day session. Three moderate Senate Democrats joined Republicans in voting no.

Blackledge, of the Mockingbird Society, said now that detention for runaways, truants and foster kids is being phased out, the state can “think about reallocating some of the money we spend on jailing of young people.”

"I think there is a bit of work to be done," Blackledge said, "but we are on track to doing it."