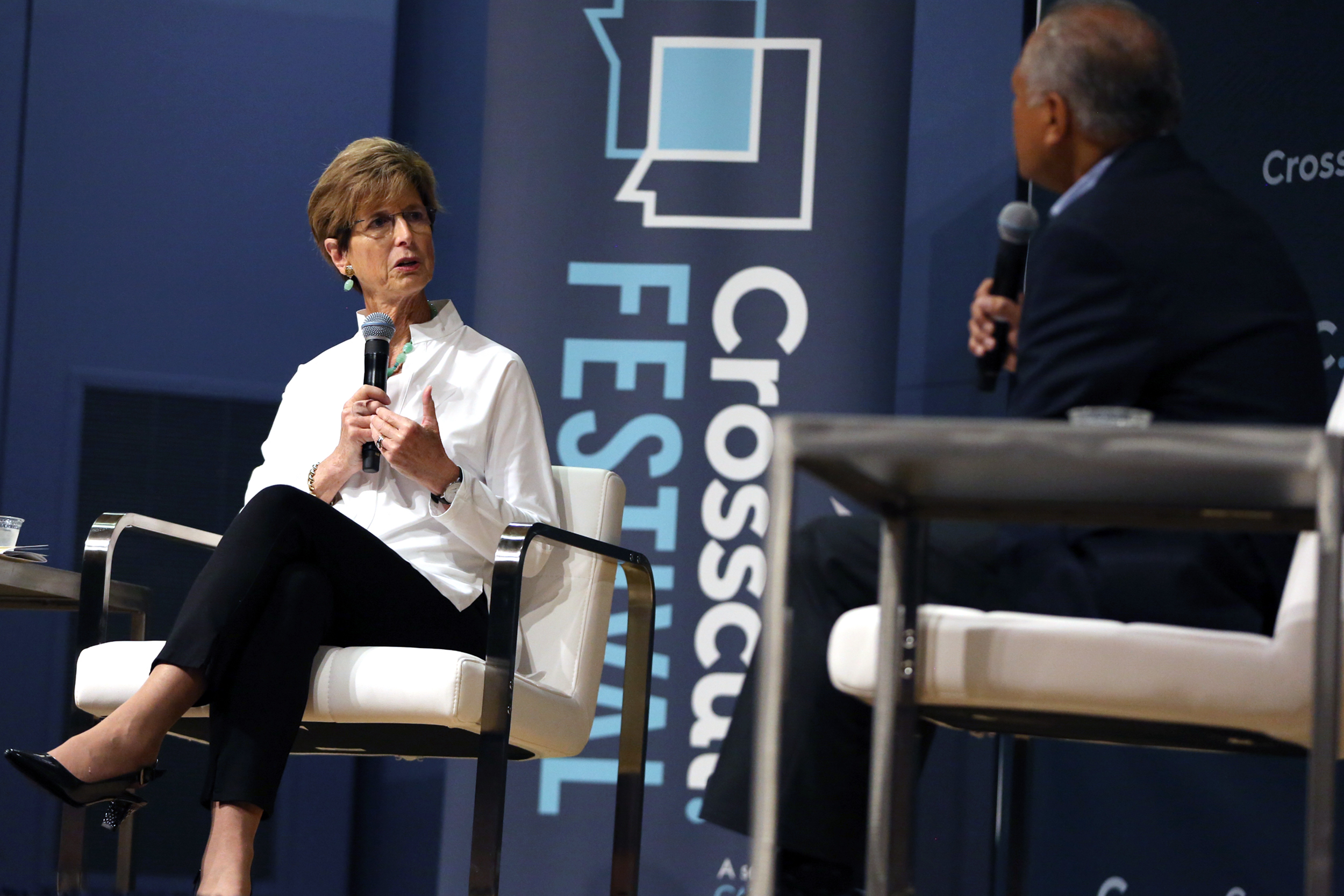 Christine Todd Whitman, left, in a discussion at Seattle University’s Pigott Auditorium at Crosscut Festival in Seattle, May 4, 2019. (Photo by Christopher Nelson for Crosscut)

At a Republican conference later this month, former Gov. Dan Evans is going to lead a wilderness hike. Evans, one of the reasons I plan to cover the conference, embodies the time when Republicans were green in Washington. He even has a wilderness area named after him. He’s 93 now, so I figure I can probably manage the trail for at least 50 yards before I lose sight of him.

I bring this up because green Republicans were in evidence at the Crosscut Festival this weekend. Given the massive amount of hot carbon dioxide produced by that man in the White House, you might think that all Republicans think science is bunk and dig coal. Not true. Christine Todd Whitman, the former head of the Environmental Protection Agency and former Republican governor of New Jersey, for example, spoke in a fireside chat (note: there was no carbon-burning fire) about the importance of addressing climate change and having an EPA that is based on science and facts, not commercial cronyism.

“I’m extremely concerned about the [Trump] administration’s view of science,” she said. She wants an administration where “science will be heard.” And she warned, “The world as we know it is melting away.”

One thing that has largely melted away is bipartisan cooperation on the environment, as climate-change deniers and resource extractors have lined up against the tree huggers. As with all things these days, sharp partisanship often trumps cooperation and compromise. Whitman recalled the days when such cooperation in Washington state was common. (See Sen. Henry M. “Scoop” Jackson, D, and Evans, R, and don’t forget former Republican EPA head and Puget Sound warrior Bill Ruckleshaus.)

“We are part of the natural environment,” she said. Whitman is also a farmer who has a CSA and is going organic. She sees connections in the world around her back home: The migrating plovers feed on horseshoe crabs in her part of the world, the eel fishermen need their eggs for bait, and pharmaceutical companies need the crab’s blood for testing drugs. If you save the crabs, you also help the birds, the fishermen and human health. Protecting the environment produces multiple wins.

Whitman brings a kind of sane, rational approach that creates nostalgia even for those who don’t remember Scoop or Evans. The fevered populism of Donald Trump’s GOP has not been caught by everyone in the party.

Inglis heads an organization called republicEn.org, which believes that conservatives should lead on climate and clean energy. He would like to see some kind of national carbon tax to nudge the free market to find solutions — he says you can’t do it state by state. The panelists talked about why it was important to find common ground on climate change. Franz says her staff is on the frontlines of climate change on a daily basis, whether dealing with floods, wildfires or dying forests. Bryant is a passionate green who wants to see Puget Sound saved — he gave it 10 to 12 years before it’s too late to save it  from storm water runoff and the pollution that brings.

But the struggle with partisanship is real. Compromise is difficult to find. The two parties are too often scoring points off each other. Bryant expressed frustration with some environmental organizations that he said won’t ever endorse a Republican, regardless of how green the candidate might be, because they are essentially arms of the Democratic Party. Democrat Franz said her work is taking her into communities like Wenatchee and Chelan, areas heavily impacted by climate issues — smoke from fires hurts tourism, there are challenges to the water supply, etc. There’s no talk of party when working with the communities to draw up plans to make them more resilient in the face of change. Firefighters, Franz said, don’t ask you how you vote before fighting a wildfire.

Asked what environmental journalists could do to raise awareness about the importance of climate change, Inglis said more stories need to reach the heart, not just the head. He told the story of going down the Snake River and how a staffer for Cathy McMorris Rogers, the conservative Republican Washington congressional representative from Spokane,  seemed stunned to learn that salmon might be gone from the Snake for good in just a few years. The water temperatures kill off the spawning salmon, but somehow that message hadn’t reached the staffer. If you remove what Inglis called “heart blockage” by telling stories that people can relate to emotionally, their heads will clear and they will see the importance of climate work more clearly, he believes.

It’s encouraging to know that, for some, such heart and head clarity have already been found in both parties.

This article was updated at 4:57 p.m. on May 6 to correct information about the timing of the conference where Dan Evans will lead a wilderness hike.