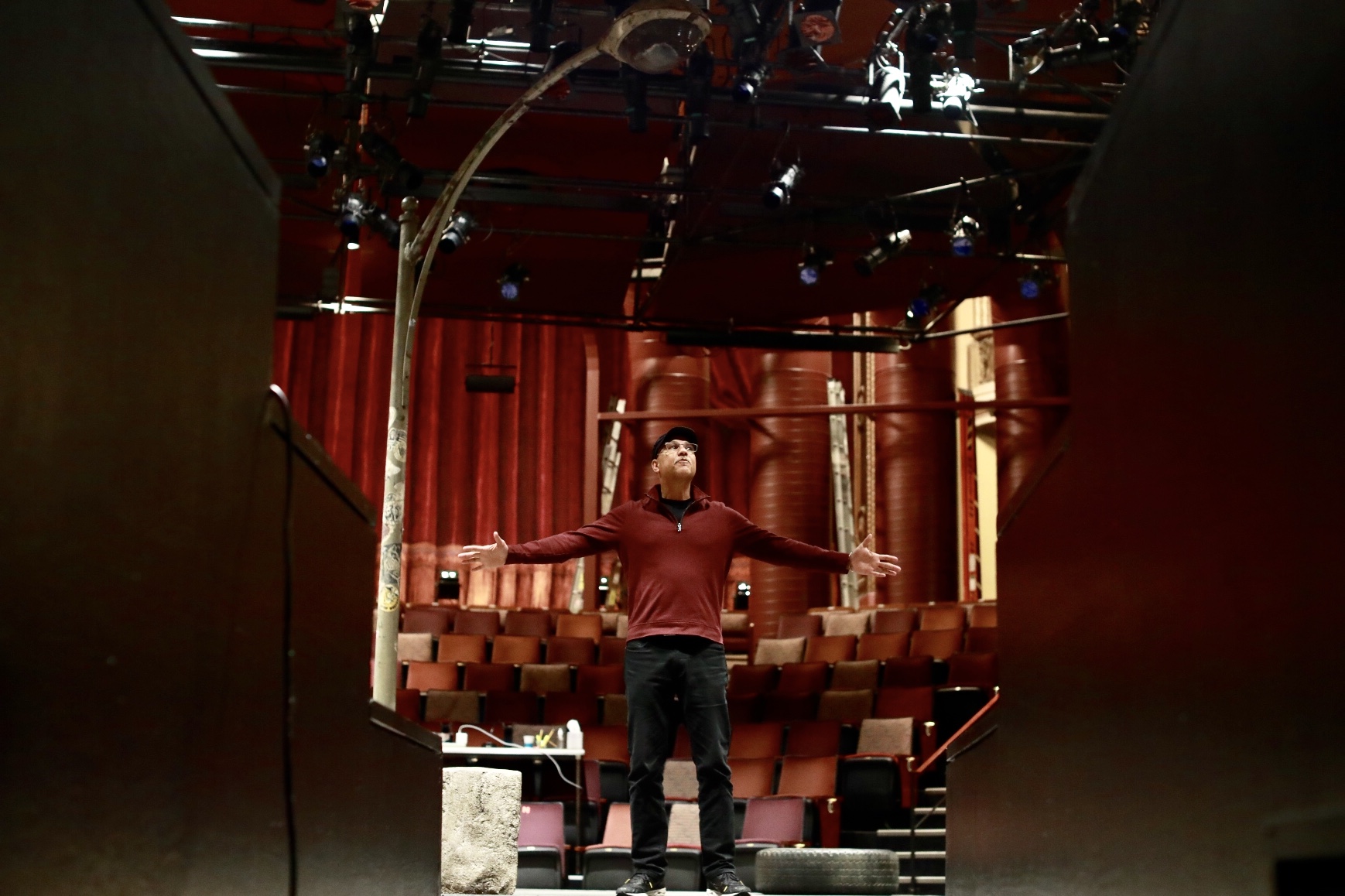 Director Tim Bond during a recent rehearsal at ACT Theatre in Seattle on May 29, 2019. (Photo by Matt McKnight/Crosscut)

You could say the Antoinette Nwandu play Pass Over is just about a couple of young Black men hanging out on a city street corner, talking trash.

Leaving it at that would be a big mistake, according to Tim Bond, a University of Washington drama professor and longtime Seattle stage artist who is directing the Seattle debut of Pass Over at ACT Theatre.

Taking a leaf from the absurdist Samuel Beckett classic Waiting for Godot, as well as the Old Testament story of Moses leading the Jewish exodus out of Egypt, Nwandu’s play is on one level a modern biblical parable conveyed in gritty poetry so striking that Spike Lee decided to capture the well-praised Steppenwolf Theatre production on film. (It came out last year.)

In Bond’s estimation, the play hits home because “we’re living under conditions that are so absurd right now. The anger and fear and frustration and the need to self-actualize are so strong.” He views the two main characters in Pass Over, homeless friends named Moses and Kitch, “as metaphors for a larger statement, very much like what Beckett was writing about. It’s the existential question of whether one finds hope or despair in the human condition."

That sense of dread is not an abstraction to Bond. “I’ve been pulled over and handcuffed and put in a police car, with an officer’s knee in my back, for absolutely nothing,” he says. “So has my son, and so has my brother.

Moses and Kitch (played at ACT by Treavor Boykin and Preston Butler III) joke around and fantasize about their own idea of Paradise. (It would include such luxuries as a girlfriend and a pair of Air Jordans.) But looming over the two is a cloud of fatality, wafting from the continual awareness of how many of their peers have died suddenly at the hands of the police — from close friends and relations to victims like Philando Castile.

“That fear, that constant trauma, keeps Moses and Kitch stuck in a stasis. And the two white men they encounter in the play perpetuate white supremacy and want to keep them in their place.”

Bond notes that “we’re told you can reach your full potential if you do x, y and z. But it isn’t true for these guys. The block in this play is a metaphor for being stuck, trapped in a certain place and way of living, way of being seen by others.”

Despite the limbo land that Kitch and Moses inhabit, Pass Over doesn’t linger in gloom, Bond emphasizes. “Moses rises up to inhabit his name,” he says, “and the question is will they get to the promised land?

“The play is funny, accessible and really physical. And the beauty of it is that these guys are constantly seeking hope under difficult conditions. Choosing hope is an act of resistance, a radical act of positivity.”

An imposingly tall man with a neat goatee and a disarming smile, Bond exudes positive energy himself. He began his theatrical career in the 1980s at the Group Theatre, a seminal Seattle company that focused on plays by writers of color. After running the Multicultural Playwright’s Festival, Bond served as the Group’s artistic director for five years. (The company ended its 20-year run in 1998.)

He moved on to Oregon Shakespeare Festival and, as an associate artistic director, became the first Black senior staffer at OSF, the nation’s largest resident theater. Directing an array of work from Shakespeare classics to modern Black dramas, Bond formed a close relationship with the late, acclaimed Seattle playwright August Wilson — whose scripts he has staged, with distinction, at theaters around the U.S., including Seattle Repertory Theatre, where he ably mounted Wilson’s Two Trains Running and The Piano Lesson.

After a New York sojourn heading the Syracuse Stage theater and teaching at Syracuse University, Bond was happy to return to Seattle in 2016 to run the Professional Actors Training Program at the UW, where he also teaches directing courses.

In addition to his local gigs, he’s in demand to direct shows at other regional theaters. Among his recent assignments was a production of a play based on the famed Sidney Poitier film, Guess Who’s Coming to Dinner? at the Guthrie Theatre in Minneapolis. Bond found the story of a white woman bringing home a Black fiancé to meet her conflicted liberal parents “still timely, and even more emotional for people now. The playwright, Todd Kreidler, gave the Black characters more backstory and it just had a totally different edge to it. It gave you more of an understanding about why the Black family might have a problem with the marriage.”

Lately, though, Bond has been embracing new works by current Black playwrights, like Nwandu, who are part of “a renaissance” of African American stage literature.  “It’s a time when these artists are taking the gloves off in regard to style and theme to tell important stories,” Bond says. “As white liberalism is hitting its limitations, there’s become more room for these voices, and they are getting more legitimacy and opportunity.”  He adds with a smile, “And Black women writers in particular are leading in the charge.”

Correction: This story originally included the name of Trayvon Martin, who was not killed by police but by a former neighborhood watch captain. It also misattributed the production filmed by Spike Lee. It was the Steppenwolf Theatre production.