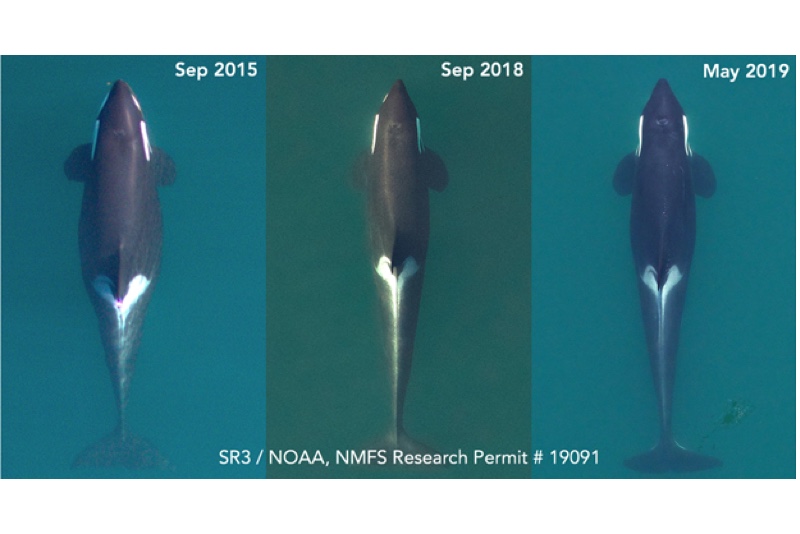 Aerial images of adult female southern resident killler whale J17, displaying very poor body condition on May 6, 2019. Note the white eye patches that trace the outline of her skull due to a reduction in fat around the head. Her condition is contrasted with September 2018, when she was also very lean, but had not yet developed such an obvious "peanut head," and with September 2015, when she was clearly pregnant (note width at midbody) and in peak recent condition. Images obtained by Holly Fearnbach (SR3) and John Durban (NOAA Fisheries’ Southwest Fisheries Science Center) using a remotely piloted drone under NMFS Research Permit #19091.

Just over a week after Gov. Jay Inslee signed off on a suite of legislation meant to protect Washington’s endangered southern resident killer whales, new drone photography is showing it may be too late for some of them.

The aerial images released Friday by NOAA Fisheries show dramatic weight loss for orca J17, one of the 75 endangered southern resident killer whales to frequent Puget Sound. The images show J17 exhibiting a serious condition with a strange name — “peanut head” — wherein facial fat deposits are so low that her head profile appears indented from above.

“In the past, once the peanut head gets to a particularly bad state, it seems to be inevitable that we’re going to lose that individual,” Dr. Deborah Giles of Wild Orca says.

Not all observers are convinced J17 can’t recover, however.

“I don't think we're willing to give up on J17 that fast,” says NOAA Fisheries’ Michael Milstein. “The point of the photogrammetry is… to understand whether the whales are prey-limited and how that affects them.”

“Of course losing weight like this is never a good sign, but we want to learn as much as possible about what the contributing factors are and how to unravel and address them,” he says. “Not all the animals that have died were emaciated, so there must be other factors at play.”

J17’s health has deteriorated since 2015, when she gave birth to daughter J53. According to a press release, researchers say J53 is also in poor condition.

The image from May 6, when compared with past aerial photos, helps outline the pattern in which J17 is declining. All images were produced by Drs. John Durban of NOAA Fisheries and Holly Fearnbach of SeaLife Response, Rehabilitation and Research. They published a study in April 2018 showing how drone photography can help scientists confirm when shortages of chinook salmon, their preferred food, put whales under nutritional stress. (Food shortage is one of the three main hazards to the southern residents, as determined by the Governor's Orca Task Force.)

When an animal is starving, it loses blubber from all over its body. But, historically, evaluating the rate of that loss is difficult for scientists.

Before drone photography, “the only indication that we would have [of their fat levels] is if they'd breach out of the water and we could see them being visibly thin, or they were documented with this condition called ‘peanut head,’” Giles says. Before aerial photography, scientists had to diagnose peanut head “conditionally” through differences in saddle patch photos, the photos traditionally used to identify animals in profile.

“From the side, [that fat loss looks like] a divot the whales end up developing behind the blowhole,” Giles says. In a healthy whale, “you want to see a really, nice, smooth or even bulbous space behind the blowhole because that’s where the whales hold a lot of fat. When they are thin, they start [burning] blubber all over their whole body but what we get to see the most of is the top of their head.”

When they see a pronounced divot, “that’s where we are able to say, ‘oh gosh that whale’s getting thin.’”

May, we would be able to tell the difference. [But aerial photos] give us an ability to measure it,” Giles says.

Scientists have been taking aerial photos of orcas since 2008. Durban and Fearnbach’s team developed a technique to analyze the animals morphometrically, or taking body measurements remotely. According to Giles, these include the width of an animal’s head from just above the base of their eye patches, or eye-patch ratio, which measures the degree of curvature around the peanut-head indentation. Essentially, it looks at how dramatically the base of an animal’s eye patches curve outward from the body: In emaciated animals, you’ll see more curvature.

Anyone can learn to observe this by looking at the three photos of J17. To see the eye-patch ratios, look at the distances between the tops and bottoms of the eye patches laterally.

“The [photo] on the far left in September 2015, the back edges of the eye patches are farther away [from each other] than the front edges,” Giles says. “And then you go to the image on the right [from May 2019], and the patch at the front is basically the same, or maybe even a little farther, whereas the back patch, where the fat would have been, that's now sunken in.”

That’s consistent with Durban and Fearbach’s findings from last year, where they were able to evaluate year-to-year changes in 44 whales. Two of those whales with severe peanut head died shortly after being photographed, “suggesting a link between body condition and mortality.”

When animals are severely emaciated, they also often also swim more slowly, and have breath that smells “very very bad, either like a garbage dumpster… or like acetone in fingernail polish,” Giles says. Giles smelled J50’s breath last year after collecting breath samples.

Smelling a whale’s breath is an important metric because it indicates how its metabolism is functioning. “The acetone smell is when they’re burning their ketones, so they’re basically burning their fat, and that’s a really bad sign,” Giles says.

Despite being able to track the progress of an animal’s emaciation, scientists can’t say whether orcas lose fat from parts of their body in a predictable pattern.

“It's actually very strange to me, [looking at these photos], I don’t really understand what’s going on,” she says. J17 seems like she’s gained weight in her belly since 2018, despite developing peanut head.

The fact that J17’s belly has changed in this way speaks to one of the difficulties of explaining a suffering whale’s prognosis to the public, she says: Sometimes a whale appears like it’s on the mend, but things happen fast.

“Information is coming out so much faster than we used to have to put it out [because of public interest] — not because we were wanting to be exclusionary and keep it to ourselves, but things can change with these individuals,” she says. Durban and Fearnbach’s team takes photos only twice a year, in May and September.

When J17 was seen in September, she was identified as being thin and therefore an animal of concern. In December, though, despite being diagnosed with peanut head, “she was actually starting to look a little bit better from the side.”

Now that drone imagery is available, they can see the extent of her peanut head condition.

But NOAA Fisheries researchers aren’t yet at the point where they’re planning to intervene, the press release states.

“They're still with the pod. The mother and calf are still together, so we're watching carefully, monitoring and collecting as much information as we can,” Milstein says.