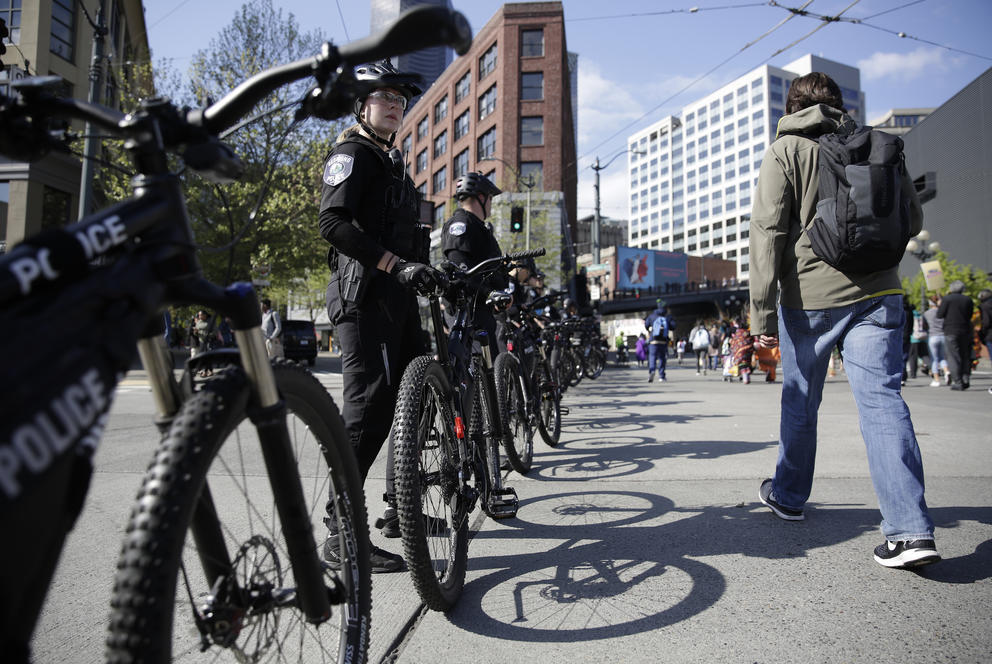 Bicycle officers from multiple departments monitior the annual May Day March for Workers and Immigrant Rights as it progresses along Fourth Avenue in Seattle, May 1, 2018. (Jason Redmond for Crosscut)

People of color are more likely to be searched by a Seattle police officer, but less likely to have a weapon. And officers pointed their guns less often at white people.

Those are some of the conclusions in the Seattle Police Department’s latest examination of the disparate impact that policing may have on the city’s communities of color. The report cites “the long-term impacts of historical inequality and institutional bias” as a possible reason for this disproportionality and it does not attempt to designate whether actions were “warranted” or “unwarranted” — a distinction without a clear mechanism for measuring.

In its conclusion, the report suggested a continued need for close monitoring and reflection.

The report, filed Tuesday in U.S. District Court for Western Washington in Seattle, is part of the department’s ongoing obligations to track potential bias within its ranks, as mandated by a 2012 agreement with the federal government to overhaul possibly unconstitutional policing practices.

The department and the city are in the final stages of that agreement. While the results of this latest report suggest the need for more examination, the department concluded, they do not amount to the department falling out of compliance with the agreement, known as a consent decree.

The results of the department’s analysis are similar to past conclusions earlier this year from an independent monitoring team, hired by the city as part of the consent decree process.

In the report — the first of two required by the consent decree — department officials pulled out four possible indicators of bias: the frequency of frisks; how often weapons were found during a frisk; the duration of stops; and instances when an officer pointed his or her weapon at a subject.

To compare each demographic with white subjects, the department used a technique called Propensity Score Matching — an imperfect method that matches situations seen as similar in an attempt to account for confounding factors.

In all but stop duration, the report “solidifies findings of disparity,” its authors wrote.

When a subject was frisked, however, the white groups were uniformly found to have a weapon more often than the "nonwhite" groups, as the report refers to them. This was starkly laid out when comparing the white control group to American Indian/Alaskan Native subjects: the likelihood that a white person had a weapon was 14 percentage points higher than with Native people. That same number is 8.6 points more than Black subjects; 4.6 points more than people of Asian descent; and 4.3 points more than Hispanic subjects.

As past studies also have shown, officers pointed their weapons at people of color disproportionately more often —  9 percentage points more at Hispanic subjects and 4 points more at Black people and those of Asian descent.

Because of the use of Propensity Score Matching (PSM) to pair subjects similar to one another, SPD concludes “that these are real and true differences in how the department interacted with these populations while providing police services,” the report reads.

However, the report’s authors also caution that their work lacks some nuance. For example, most of the stops and uses of forces were found to be proper police actions. The results “do not, however, explain what was occurring in each of these interactions, including a variety of important factors not yet available to the model — officer prior knowledge of the individual, behaviors and words expressed during the incident, and recent crime trends in the specific area.”

In a statement, members of Seattle's Community Police Commission, created as a part of the consent decree to be the community's voice in police matters, said, "While the results are mixed, our early analysis has identified some concerning disparities in frisk rates, frisk hit rates, and pointing of a firearms. We’ll be analyzing these numbers in greater depth over the next two weeks and expect to send a letter outlining our thoughts to Chief Carmen Best."

In its past analysis, the independent monitor came to similar conclusions about disparities in police actions, but nevertheless concluded the department remains in initial compliance with the consent decree. As part of that analysis, the monitor found that SPD officers rarely use force, a trend he attributed to changes in crisis intervention and de-escalation training, implemented as part of the consent decree.

This latest report comes at a time of tense waiting for the city and the police department. Both have been under the watchful eye of a federal judge since 2012, when the city and the Department of Justice avoided litigation by agreeing to overhaul use of force practices and remedy possible bias.

Last year, the judge found the city had tentatively met its obligations under the agreement. But that status was thrown into doubt after the city approved a new contract with the rank-and-file union, the Seattle Police Officers Guild, which Mayor Jenny Durkan defended but some criticized as a rollback of reform. The judge also questioned why an officer who had been fired for punching a woman was reinstated.

U.S. District Court Judge James Robart has called for a hearing on May 15, which could determine whether the city is on its way to finally emerging from under the agreement.

The teens found guilty of murder in the Jungle deserve mercy

The young lives of James and Jerome Taafulisia were beset by poverty and neglect when they committed their violent crimes. So was mine.

Seattle, be wary of defunding police without building bridges

Lasting change in policing and public safety will not flow from feel-good funding shifts. Social services must be transformed, too. 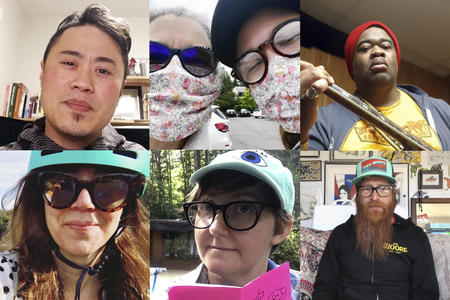 6 video diaries from your neighbors in the Pandemic Northwest

In our ongoing Isolation Diaries series, we get powerful 90-second summaries of the first months of pandemic life.