Saving Seattle's last 'exceptional' trees means getting to know them

With The Last 6,000 project, 'tree librarians' are hoping to document and save Seattle's vulnerable canopy. 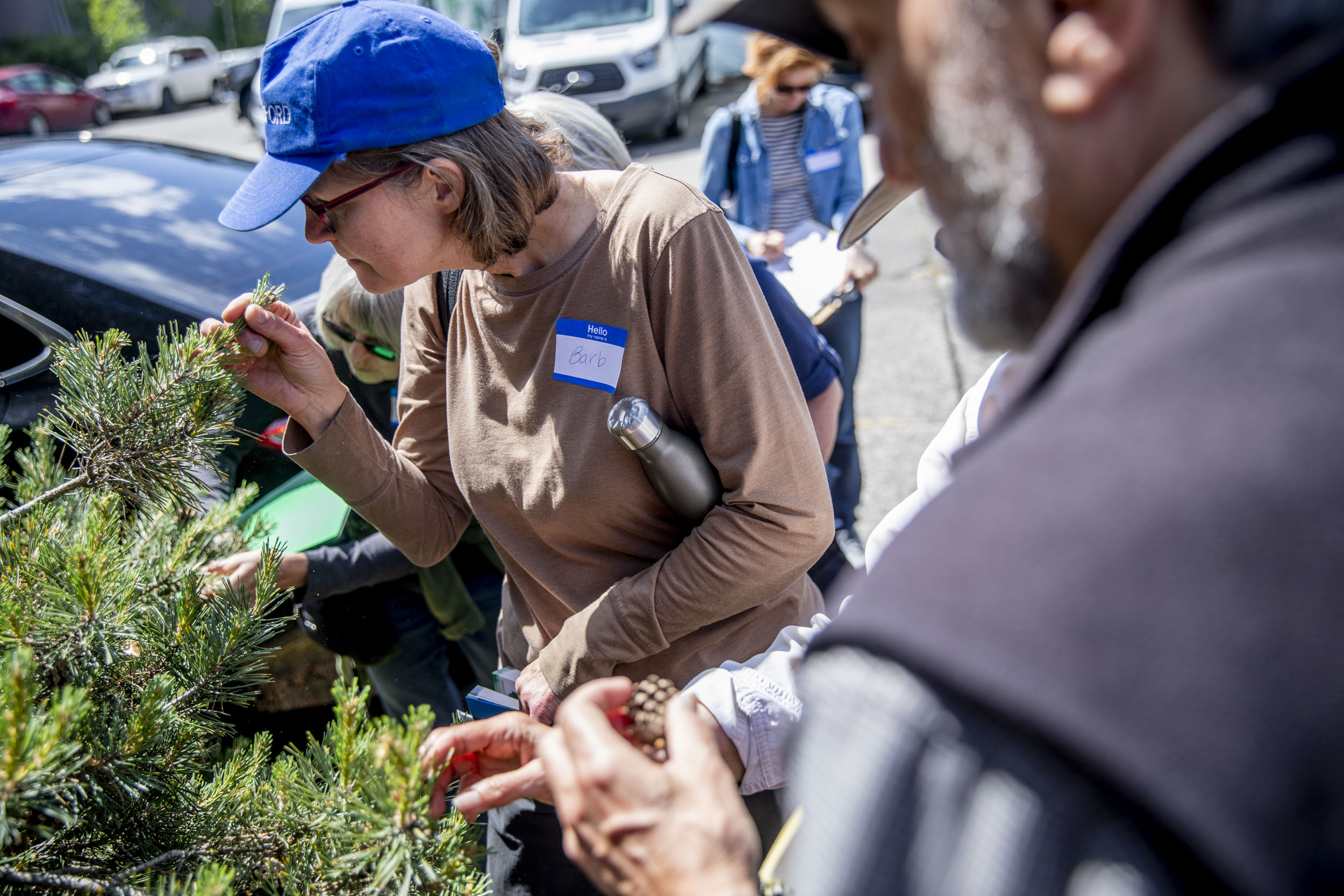 Barb Burrill of Seattle smells a branch as she learns about identifying majestic, or 'exceptional,' trees, meaning trees with a trunk diameter of 30 inches or more, Burrill is with a group of volunteers at Magnuson Park in Seattle on May 19, 2019. The training is a part of a citizen effort called The Last 6,000 that locates the remaining majestic trees in Seattle. (All photos by Dorothy Edwards/Crosscut)

It’s a warm Sunday in Magnuson Park and more than a dozen tree enthusiasts have gathered around a stray picnic bench. Diana Gardiner, a Ballard resident and “tree ambassador,” passes a leaf around the table.

The leaf is bright green, about the size of your palm, and has pointed edges and a flat top. Each person inspects it closely. Gardiner tells them that it’s the leaf of a tulip tree.

“See how it’s kind of cut off at the top?” Gardiner says. “That’s very distinctive.”

She’s teaching the group to be tree librarians — in other words, how to identify and catalog different species of trees around Seattle. There are tricks for each one: Douglas firs lean over with dangling, twisted branches. Spruce tree cones hang down and don’t stand upright like a fir’s. If a tree has a bent top, it might be a hemlock.

“We’re like doctors,” she tells the 15 or so volunteers. “We’re looking for common characteristics.”

It’s been five years since Gardiner became an organizer for the trees. She first learned their names as a tree ambassador with the city’s Trees of Seattle program, in which she was taught to identify different species and lead walking tours to introduce others to them as well. Growing up in the Puget Sound area, she was always bothered by not being able to call trees by name.

Names were always important to her in her past work as a union organizer. Without knowing the names of the people  — or trees — you’re trying to help, she wondered, how could you possibly develop empathy for them in a community?

“You’ve got to know names,” she says. “That’s one reason why [humans] can be so nonchalant about chopping trees — we don’t know them.”

Green-space advocates have long been critical of the Seattle’s tree canopy protections, as evidenced by criticism of the city’s existing tree ordinance. Seattle first started its “exceptional tree” program in response to public concerns about tree removal. “Exceptional” trees, which are classified as such if they meet certain requirements for “size, species, condition, cultural/historic importance, age” or other factors that benefit a community, are particularly vulnerable.

There isn’t an official count of how many exceptional trees the city has or how many have been cut down since 2001, when the term was first used in Seattle Municipal Code. The closest indication comes from the city’s Seattle Tree Inventory Map, which catalogs  “heritage trees” nominated by citizens. Heritage trees automatically qualify as exceptional trees.

Moon Callison, communications manager of the Seattle Department of Construction and Inspections, said it’s difficult to nail down a specific number of exceptional trees as new ones are added to the list each year. She says the city often learns about exceptional trees only during development processes or from resident complaints.

“We get comments from residents concerned about exceptional trees from all over the city,” Callison says by email. “Often, those comments are prompted by a development proposal that would potentially remove a tree, particularly if a project had a public notice.”

That’s where the tree librarians come in: Backed by PlantAmnesty, Seattleites hoping to protect the exceptional trees that remain have launched The Last 6,000, an initiative working to catalog the 6,000 or so they estimate exist throughout the city. That number came from a 2016 tree canopy measurement conducted by the University of Vermont that found that 6,338 trees with a diameter larger than 30 inches remained in the city. That diameter alone can qualify a tree as “exceptional” (or what the campaign calls “majestic”). Members hope to count 1,000 of them by the end of 2019.

“There is no street-level data from that study, and no satellite images have been assessed since then,” the campaign’s website adds. “Therefore, we don't have a good picture or current data of how many, what species, the state of health and where these majestic trees currently live in our city.”

The campaign’s website allows any visitor to add trees to PlantAmnesty’s list; over 200 submissions have been received since the website opened at the beginning of April. The tree librarians hope to help identify and verify these submissions. Interest in the project seems to be growing: The Last 6000’s Instagram account, which offers initiative updates and pictures of cataloged trees, has about 500 followers.

PlantAmnesty Executive Director Dominic Barrera says the idea came from one of their group’s members sometime last year after reading the results of the University of Vermont study.

Trees get cut in Seattle every week —  often for redevelopment — and neighborhood groups are increasingly rallying around particularly beloved specimens, such as a tulip tree in Queen Anne. It’s how Gardiner first got interested in tree activism herself: In 2015, a ginkgo tree in her own neighborhood was threatened by developers. While she couldn’t save it, the experience led her to launch Keep Ballard Trees Standing, which in turn introduced her to other tree lovers in the city, such as the late PlantAmnesty founder Cass Turnbull.

Now that she’s learned the names of the trees herself and is passing that knowledge on to others, Gardiner says she’s hoping others will work to protect them. After all, they can’t protect themselves; she says when things are tough for other species like humans, it’s easy to pack up and just leave.

“But not the trees,” she says. “The trees stay where they are. You have to admire a tree because it’s the only major living thing that has to thrive where it’s at.”