To aid in the rush for resources and shipping lanes, the U.S. has commissioned a new ice breaker. It’s likely to call Puget Sound home. 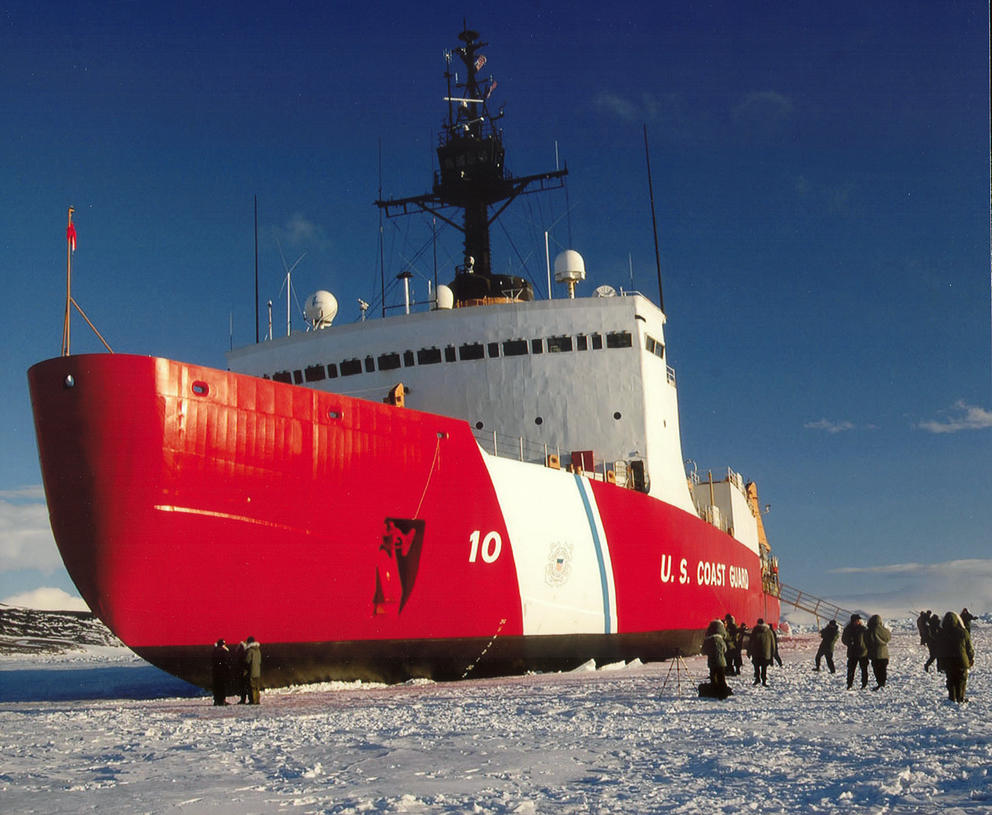 The Polar Star icebreaker sits outside McMurdo Station, Antarctica, Feb. 16, 2006. The Polar Star is one of two such ships operated by the U.S. Coast Guard that currently dock in Seattle. (Photo by Mariana O’Leary/USCG).

In the 1890s, Seattle was the gateway to the Klondike Gold Rush. As countries eye the warming Arctic in a 21st century rush to establish maritime trade routes and exploit natural resources, Puget Sound is once again poised to serve a vital support role.

That, at least, is the vision that U.S. Sen. Patty Murray of Washington, put forth as she proudly announced the commission of a new heavy icebreaker, the first commissioned in 40 years. The ship will complement the U.S. Coast Guard’s existing polar vessels, both of which are based at the Port of Seattle.

The future polar security cutter will be built in Mississippi at a cost of $746 million and is expected to set sail in 2024.

“We are an Arctic nation and Washington state, with our rich maritime industry and our proximate position to the Arctic Circle, is a strategic asset in our nation’s efforts to promote our interests in the north,” Murray said late last month at the sixth annual Arctic Encounter Symposium at Bell Harbor International Conference Center on the Seattle waterfront.

Murray, a Democrat, leveraged her seat on the Senate Appropriations Committee and a strong working relationship with Alaska Republican Sen. Lisa Murkowski, who also attended the symposium, to secure the funding. The new vessel will shore up the medium icebreaker Healy and especially the heavy icebreaker Polar Star, which is falling apart. That funding was nearly scrapped in January during Congress’ spat with President Donald Trump over a U.S.-Mexico border wall.

This budget cycle is not the first time the Pacific Northwest’s congressional delegation has come to the icebreakers’ rescue. Murray helped secure funding in 2009 to reactivate the Polar Star’s sister ship, Polar Sea, which had been taken off duty after major engine failure, and Sen. Maria Cantwell, D-Washington, and Sen. Mark Begich, D-Alaska, provided a legislative lift to fund sorely needed repairs in 2014.

The icebreaker announcement in Seattle came amidst two momentous months for Arctic power plays. In early April, Russian President Vladimir Putin unveiled a dramatic expansion of his country’s Arctic fleet. The country, one-third of which lies above the Arctic Circle, is home to four nuclear-powered icebreakers, the only such vessels in the world, with three more under construction. In 15 years, the country expects to have 13 heavy icebreakers.

Earlier this month, the U.S. nixed the final communiqué of the Arctic Council, an eight-nation forum, over language that attributed climate change to a warming Arctic as part of a two-year plan to balance environmental concerns with mining interests. The U.S. decision may signal cracks in the relatively cooperative multinational body, according to analysts.

Either way, for over a year, Adm. Karl L. Schultz, commandant of the Coast Guard, has been publicly calling for the U.S. to adopt a “6-3-1” approach: build six new icebreakers, three of them heavy, and one right now.

Scott Montgomery, a lecturer at the University of Washington’s Jackson School of International Affairs (which offers an Arctic Studies program), studies the intersection of energy, security, and geopolitics.

“I would bet the three heavy icebreakers will be built because the U.S. is so far behind the curve,” he told Crosscut. “That would put the U.S. on the map and Congress does see that as important.”

Neither Murray’s office nor a Coast Guard spokesman would confirm whether Seattle will be the home port for the new polar security cutter, or any of the up to five additional vessels that Schultz hopes for. But Montgomery thinks it is a safe bet we will see more icebreakers coming in and out of the Strait of Juan de Fuca.

“Puget Sound and Seattle are probably the best options,” he said. “We’re the furthest north major port that’s closest to the Arctic.”

If a beefed up icebreaker fleet were to make its home in Elliott Bay or across the sound at Naval Base Kitsap, the arrival of more vessels ready to charge through the polar ice of the Arctic and Antarctica would likely increase Puget Sound’s geopolitical importance, Montgomery said.

In the immediate term, Montgomery sees a need for the U.S. to police the high seas against illicit overfishing, especially by Chinese fishing boats, and the new polar security cutter, which can be equipped with deck-mounted weapons, may play beat cop.

“If there is consistent illegal fishing, it will take on a constabulary function,” he said.

For now, the far north remains peaceful, with the eight-nation Arctic Council a model of international cooperation. But that could change, too, Montgomery warned, putting Puget Sound’s port facilities front and center in a future race to control Arctic shipping lanes.

“There are geopolitical dimensions to the Arctic and I think they are going to increase,” Montgomery said. “Peace depends on cooperation to continue and there is no guarantee that it will on the Arctic Council, given increasing tension between Moscow and Washington.”

by / January 14
Inside Crosscut