How pop culture imagery and 'Can I touch your hair?' affect identity. 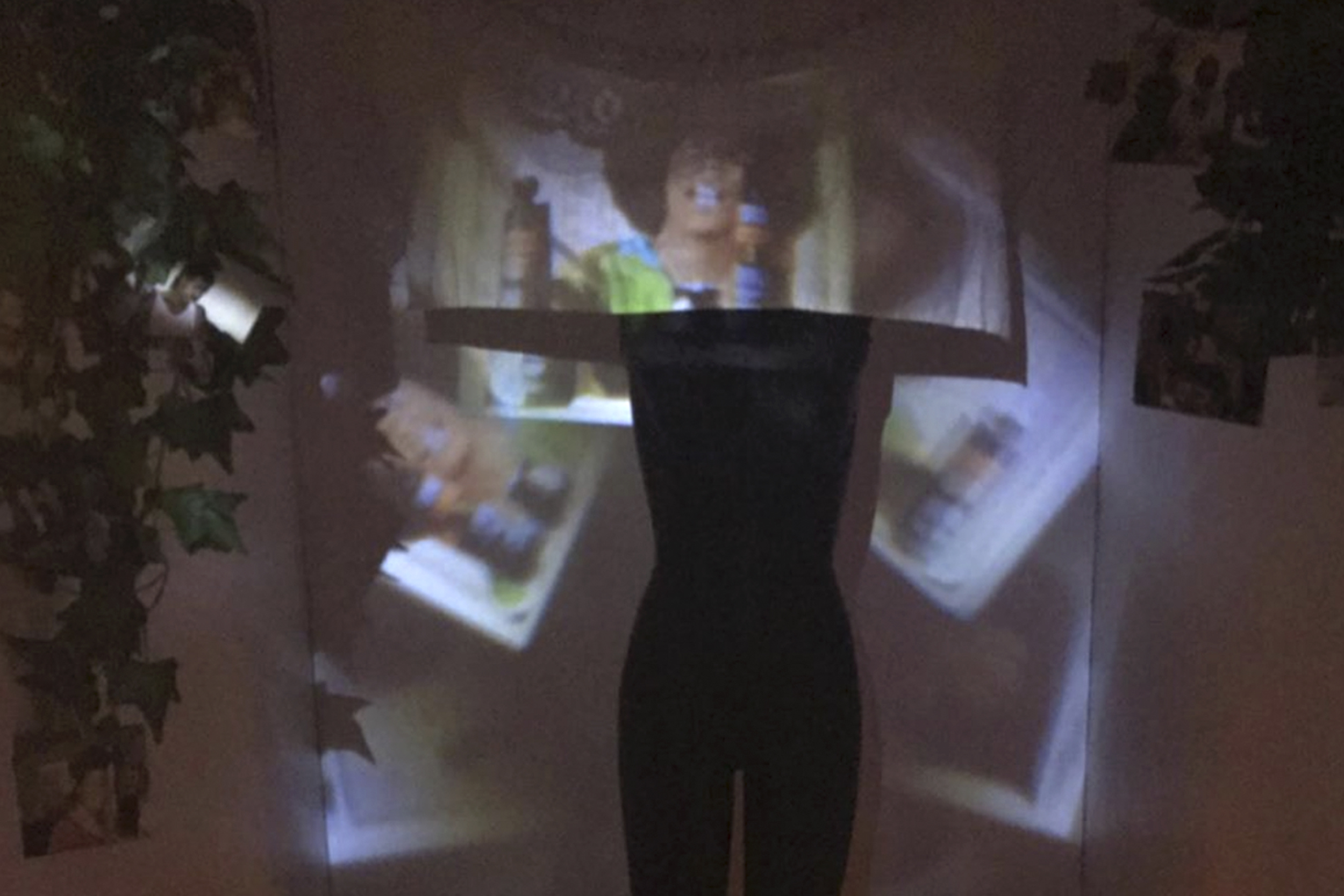 Alexis Taylor's Black Among Other Things as seen in the AURA Gallery in Seattle. (Photo from Instagram)

The art installation invites viewers into a small, dark closet that can comfortably fit three people. There’s a bench in front of a shrine that features a Black mannequin, an Afro, candles, a Hennessy bottle, a small cherub and an arch made of vines. There are photos of a Black family — the relatives of Alexis Taylor, who is the creator. And there’s an audio soundtrack of music, poetry and a culturally insensitive encounter.

Taylor, 22, created Black Among Other Things, as part of a senior project at Seattle University for an independent studies class. Taylor said the project explores her identity as a Black woman living in Seattle.

“It’s unapologetic, it’s abrasive, it’s hard to digest, it gives you goosebumps,” Taylor said. “This is my identity.”

The installation was exhibited for one day in April on campus. One of Taylor’s professors, Ruchika Tulshyan, saw it and told local curator Emily Pothast that this was something she needed to see.

“I stepped inside the room and was swallowed whole by the sonic and visual world Alexis had created inside the closet,” Pothast wrote on Facebook. “Family photographs dangled from the walls, while a video projector played snippets of Black characters edited from Hollywood movies. On the floor was a heap of objects that hovered between a humanlike entity and an altar. The soundtrack in particular was incredible. …”

Pothast, who runs the tiny AURA art gallery out of her Central District home, later offered to exhibit the installation there for one day. But she kept getting requests from people who were interested in seeing the work.

The piece generated buzz within the local arts community.

“It hit home on the issues around Black female bodies … [and] ways that the bodies are violated and personal space is violated in order to create a particular power dynamic,” said Emily Zimmerman, the director of the Jacob Lawrence Gallery at the University of Washington.

“It’s a visual and audio collage of Black existence and Black pain and a little bit of Black joy,” said Elisheba Johnson, co-founder of Wa Na Wari, a Black art space in Seattle. “I felt seen.”

Pothast has now hosted Black Among Other Things twice for the public at AURA.

“It was a rager,” Pothast said in an interview at her home, describing the first showing. She estimates 75 to 100 people came through her house over four hours.

Unlike previous times when she’s hosted shows, Pothast said people have stood in line and waited 30 minutes to experience this installation.

Last Tuesday, during the second showing, about a dozen people showed up. Among those who were there was Taylor, the creator.

Taylor said she never expected there would be so much interest in her work, assuming it would simply be a class project.

“I took samples from all of my favorite VHSes that star Black women,” Taylor said, explaining, “it also plays on this idea of the different hats that society gives us, so you see these really hyperconflated roles.”

The images are accompanied by a soundtrack: distorted gospel music, Taylor’s mom talking about life in Austin, a pep talk, slam poetry about the problems Black women face, Shirley Chisolm, Gil Scott-Heron, James Baldwin, and a woman casually asking Taylor if she could touch her hair.

“Is the green woven into your hair? Do you mind if I touch it?” says the woman, who is identified in the recording as longtime Seattle Times columnist Nicole Brodeur.

The recording is Taylor’s from an interview she had with Brodeur, who is white. Taylor, a communication and media student, was assigned to write a profile on a local journalist for a journalism class. She reached out to Brodeur more than a year ago, after the columnist apologized for writing a story about Columbia City that was called racist. Taylor said she wanted to see what Brodeur was like.

Taylor said the interview had barely started with questions about Brodeur’s career when the columnist abruptly asked about her hair while reaching out to touch her braids.

“At the time I had green braids…. I’m completely sitting there just stunned,” Taylor recalled. “All of a sudden this person is violating my space."

Taylor held on to the audio of the experience she calls “traumatic” and “cringey.”

She said her teachers implored her to make the audio public. Taylor chose to collect recordings of her day-to-day life and conversations. When she was assigned to complete an autoethnographic assignment, she decided the recording would fit because it’s such a common experience for Black women.

In an email, Brodeur said she has since written an apology to Taylor after learning this week about the installation that samples the interview, which occurred a year ago.

"I realize now I was wrong to do that," she wrote, adding, "My reaction is regret for hurting Alexis, my insensitivity to her and sadness for how this is playing out. I completely understand her being upset. I’ve learned a lot this year and I intend to keep learning."

In an email, Seattle Times incoming executive editor Michele Matassa Flores added: "We know we need to rebuild trust, and that begins by continuing to examine our own newsroom culture. We’re exploring bringing in an outside facilitator to help with that, building on the work of our internal diversity task force."

Johnson, the arts professional, saw the show on May 4. “It’s an ‘Amen’ moment,” she said about the Brodeur's excerpt. "I’ve had people ask me that all that time. ‘It’s so cool’ or ‘it looks so weird.’ People want to get up in Black culture. They want to take all these parts of Blackness but not the people.”

Zimmerman sees a lot of student work as part of her job at the UW. She said Taylor’s piece achieves a level of complexity. “It’s a very rare and beautiful thing,” she said.

Pothast said she’ll post information on Instagram if there are future showings of Black Among Other Things.

An earlier version of this story misspelled Ruchika Tulshyan's name.