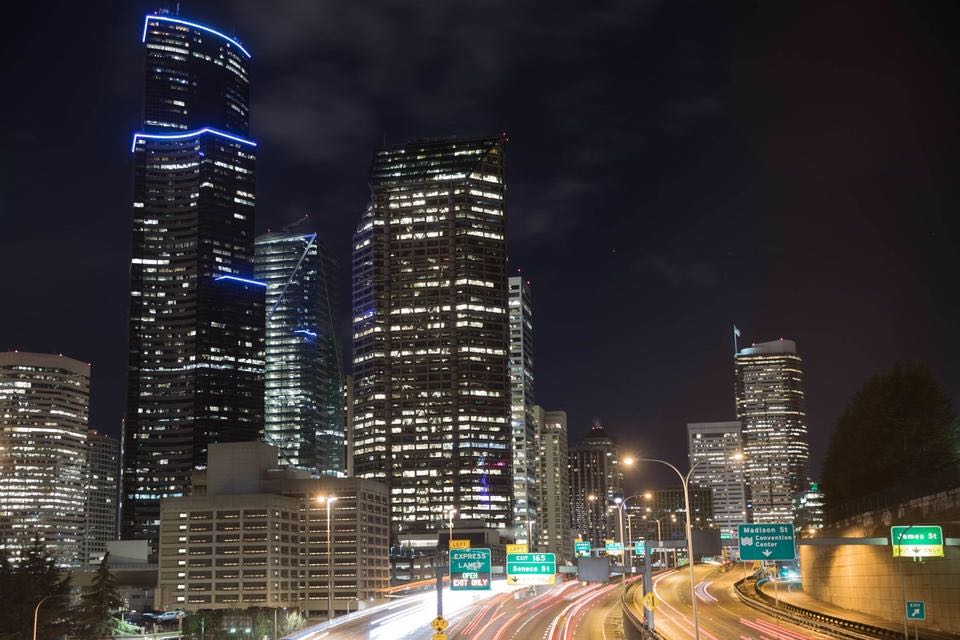 A view of the Seattle Municipal Tower and the city's skyline during the evening of Jan. 18, 2018 in Seattle. (Photo by Matt McKnight/Crosscut)

A month after being confirmed as Seattle’s chief technology officer, Saad Bashir is taking an ax to the city’s information technology leadership team.

On Monday, Bashir fired 14 upper and middle managers in the Department of Information Technology as part of a significant reorganization of the city’s centralized technology department. The department has a budget of $277 million and 680 full-time equivalent employees.

Among those let go were directors and deputy directors of operations; strategy and planning; applications; engineering and operations; client services; and more, according to a list of the names obtained by Crosscut.

The directors were notified Monday morning. None was fired for cause, according to an IT spokesperson.

A union representative with IBEW Local 77, which represents the department’s rank and file, said none of the union’s members have been affected so far.

Over the department's short existence, city employees have complained about Seattle IT’s slow processes. Bashir promised from the moment he was introduced to do what needs to be done to remove obstacles that might bog down the large department.

In a memo to employees sent Monday and obtained by Crosscut, Bashir outlined a new organizational chart, which eliminated multiple layers of middle management. The purpose of the changes, he wrote, was largely to push the department toward a speedier decision-making flow and to foster quicker innovation. He told staff some people were being let go, but not who or how many.

A spokesperson for Seattle IT confirmed that 14 positions were eliminated and said new positions would soon be created. It’s unclear if the number of new jobs will equal those cut, but those being let go may apply for the positions.

In a statement to Crosscut, Bashir said: “Like all technology, the Seattle IT department is evolving. The changes that are occurring within Seattle IT are designed to position Seattle IT into a best-in-class service delivery team. All changes reflect the feedback of IT colleagues and our client departments to pivot the department into an agile, outcome-driven, and client-centric organization. More than ever, the City of Seattle is looking towards technology to drive operational improvements and to deliver services for the residents of Seattle and we will make it our mission to be there as a true partner.”

The Department of Information Technology is still in its adolescence, created by former Mayor Ed Murray in 2015. Its  purpose was to consolidate the city’s disparate technology systems and personnel into a centralized location. As a result, hundreds of employees were moved from their respective departments, such as Seattle City Light or the Seattle Fire Department, into new offices, working under the city’s CTO.

Although it's one of the city’s lesser known departments, Seattle IT has the sixth largest budget among the city’s 40 departments and agencies — eclipsing even the Seattle Fire Department. Its 680 full-time equivalent employees touch nearly every aspect of city functions, handling technologies from traffic monitoring to body cameras.

The purpose of the consolidation was to streamline processes and bring the city’s various departments onto the same servers and platforms.

But employees and customers alike complained early on that the consolidation created new red tape and stripped departments of the on-hand expertise they needed. The Seattle Police Department, in particular, has sought to reclaim some level of technological independence.

Mayor Jenny Durkan nominated Bashir in January, more than a year after the department’s first and only permanent director, Michael Mattmiller, returned to the private sector. Bashir previously worked in Ottawa, Canada, as the city’s chief information officer. Prior to that he worked for Calgary’s economic development agency.

At his introduction in City Hall, Bashir acknowledged some of the challenges facing the department and broadcast that he would be making changes, saying the department needs to be “extremely nimble” in how it operates. “Sometimes, over time, people and processes can get in the way,” he said.

“You can expect that as the new CTO I’m going to question and simplify every internal IT process, policy, structure that we have in place just for the simple reason to make sure we are not standing in the way of business,” he added.

For Durkan, technology infrastructure has also been a source of frustration. When introducing Bashir, she specifically called out the city’s new utility meters, which came in over budget, and the rollout of a new permitting system, which did not go smoothly.

“We are revamping — almost department by department — how we interface with the public,” she said.

When asked about the consolidation effort, Durkan previously told Crosscut, “It’s one thing I want to look at with him. When does it make sense to have some resident computer or tech people within a department so they’re immediately responsive to the unique needs that department may have?"