Skip the ATM: Congress may finally let you buy weed without cash

State treasurers are the latest group asking that Congress allow marijuana businesses to use bank accounts in states where sales are legal. 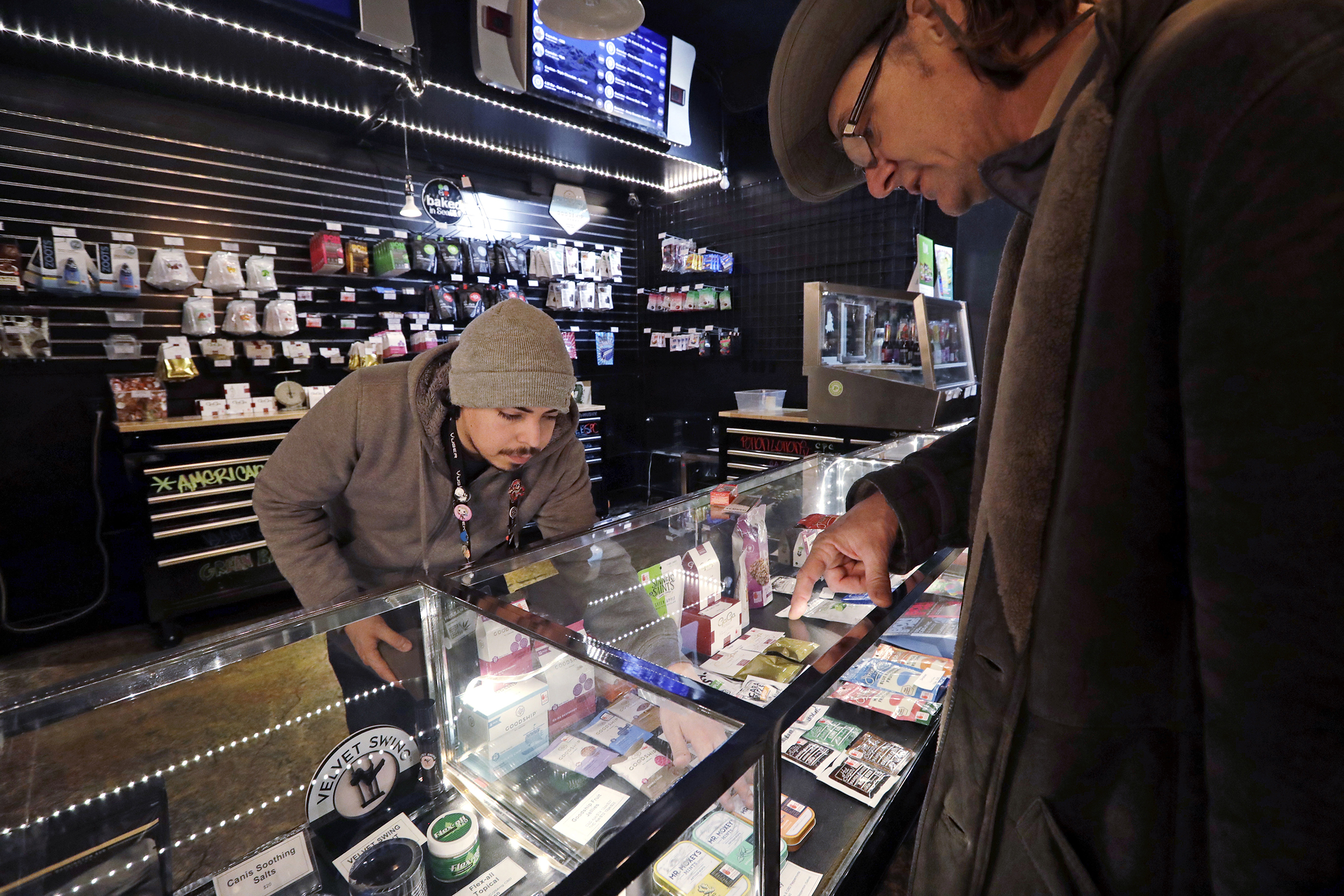 More than six years after Washington state legalized marijuana, it’s no longer accurate to call the industry a nascent experiment. Still, even now, customers buying pot from more than 400 legal retailers across the state must make their purchases in cash, not using credit or debit cards. Many banks won’t work with state-licensed cannabis businesses at all, citing conflicts between state and federal rules.

The problem is not new, but for the first time, a partial remedy is moving forward at the federal level. In March, a U.S. House committee advanced legislation that aims to get federal banking regulators off the backs of banks that work with licensed cannabis businesses. The legislation would prevent federal regulators from prosecuting financial institutions that provide services to licensed businesses in legal weed states, including Washington.

“What we believe is this is the first marijuana-related bill that has ever passed out of a House committee,” said U.S. Rep. Denny Heck, D-Olympia. The Secure and Fair Enforcement (SAFE) Banking Act is expected to pass the full House, though it faces a harder road in the U.S. Senate.

One reason for the bill’s new momentum is the Democratic majority in the House, a first since 2010. But growing pressure from state officials is playing a role as well: On Friday, an association representing every state treasurer in the nation called on Congress to pass a version of the policy, joining 38 state attorneys general who made a similar pitch earlier this month. Washington’s Democratic attorney general, Bob Ferguson, and Republican treasurer, Duane Davidson, are among the state officials urging Congress to act swiftly.

While Washington and Colorado embarked into unknown territory in 2012, today a total of 10 states have legalized marijuana for adult recreational use. Two-thirds of states have approved comprehensive medical-marijuana programs, while additional states allow the limited medical use of CBD oil.

Vicki Christophersen, the executive director of the Washington CannaBusiness Association, said the conversations members of her group are having with lawmakers this year in Washington, D.C., have been of an entirely different tone than in the past.

“People are now talking to us that wouldn’t even have meetings before,” Christophersen said.

She attributed that to the growing number of states approving marijuana legalization, as well as the bipartisan support emerging among state officials throughout the country.

The need for a solution is becoming more acute as the industry grows, state officials argue. According to industry figures cited by the 38 attorneys general, sales from the legal marijuana industry reached $8.3 billion in 2017, and are expected to exceed $25 billion by 2025.

That means more business owners across the country are clamoring for access to the banking system to help them perform basic tasks, such as processing payroll and paying for product deliveries.

While four financial institutions — three credit unions and a small bank — in Washington state have taken on some cannabis businesses as clients, “we still have folks who have trouble accessing banks,” Christophersen said.

“One of our members had her bank account canceled five times,” she said. “One time it was canceled the day before payroll — she had to send her employees home with cash, which is not very safe.”

Statewide, Washington has more than 10,000 employees working in the legal marijuana industry, according to the CannaBusiness Association. Under current banking regulations, those employees can have difficulty getting personal loans “because of the source of their income,” Christophersen said.

The safety issue is also on the minds of legislators. Heck, a co-sponsor of the SAFE Banking Act who has been working on solutions for the past six years, said he wants to ensure pot businesses aren't forced to deal in large amounts of cash, something he said can attract robbers and put employees at risk. He referenced the 2016 fatal shooting of Travis Mason, a security guard at a marijuana dispensary in Colorado, as an example of what can go wrong.

“Because someone thought he was guarding a place that was all in cash, they came in and robbed him at gunpoint, and he was shot and killed,” Heck said Friday. “This is a public safety issue.”

Those concerns were echoed in the resolution passed Friday by the National Association of State Treasurers, as well as in the May 8 letter from the state attorneys general. Both groups also mentioned the difficulty of tracking marijuana revenues for taxation and regulatory purposes when all of the industry’s business transactions happen in cash.

Heck said he was “stunned” at the bipartisan support the legislation received in March when it passed 45-15 out of the House Financial Services Committee. Almost half the Republicans on the committee supported the bill, he said, while more than 180 House members have signed on as co-sponsors.

That’s despite an earlier letter from two House Republicans, Reps. Patrick McHenry and Blaine Luetkemeyer, who asked for a delay prior to the committee vote. In their March 22 letter, the two GOP lawmakers said the interaction between state legal marijuana laws and federal law raises  “many questions and concerns.”

“Any change to these statutes, or those that impact them, has the potential to divide the Congress and the country,” McHenry and Luetkemeyer wrote.

Yet recent polling suggests that marijuana has become less divisive among members of the public. About 6 of 10 Americans polled in recent surveys say they support outright legalization of the drug, a step far beyond what the banking bill would do.

“Congress is pretty behind the public on this,” Heck said. “I actually believe that if you put the SAFE Banking Act to a vote of the people, it would pass overwhelmingly.”

Heck said the legislation is certain to pass the House; the only question, he said, was by how many votes. A full House vote could come within weeks.

The legislation's fate in the Republican-controlled U.S. Senate is far less certain, but Heck said that Idaho Sen. Mike Crapo, who chairs the Senate Committee on Banking, Housing, and Urban Affairs, will be more inclined to take up the bill if there's "a good-sized vote out of the House."

A number of Senate Republicans have signaled support for marijuana-related reforms. In particular, Sen. Cory Gardner, R-Colorado, has looked to protect the legal marijuana industry in his state, even saying he has secured a pledge from President Trump to support and sign that type of legislation.

Bob Ramstad, the owner of OZ. Recreational Cannabis in Fremont, said he wants to see Congress do far more than pass the SAFE Banking Act, which he called a "baby step." Ramstad said the bank bill would resolve only some of pot business owners’ problems that stem from the federal criminalization of marijuana.

For instance, Ramstad had about $500,000 in salary expenses last year that he could not deduct as a business expense, because “what I do is considered illegal by the federal government,” he said. The SAFE Banking Act wouldn’t address those types of tax issues. Ramstad said even if the bill were to become law, he would remain concerned about accepting credit cards from customers when marijuana use is still federally illegal.

“OZ. accepts cash precisely because it is clear to anyone and everyone that if they hand us cash over the counter in our shop in Seattle, the transaction occurs here in Washington state, and the federal government has no jurisdiction,” Ramstad wrote in an email. He would prefer that Congress pass legislation saying that, if a state has a well-regulated cannabis industry, such operations are not considered illegal in the eyes of the federal government.

A separate bill Gardner is sponsoring with Sen. Elizabeth Warren, D-Mass., would accomplish that. It is called The STATES Act.

Salal is one of the four financial institutions in Washington that provide services to pot businesses, though Rosendal said the credit union technically is doing so in violation of federal law. "Potentially, if the federal government wanted to, it could come and arrest us," he said Friday.

Rosendal said that while Salal serves about 350 cannabis businesses today, he and the three other financial institutions that have agreed to work with the industry can’t meet the growing demand. Right now, there are about 1,800 state-licensed cannabis businesses in Washington, a category that includes producers and processors, not just retail stores.

If Congress passed the SAFE Banking Act, the measure would protect not just Salal, but also the third parties the credit union needs to work with, such as insurers and armored car companies, Rosendal said.

Credit unions and banks are among those urging Congress to pass the weed banking bill.