Daytime flexibility could be an advantage in Seattle's crowded race. So who has to work — and who doesn't? 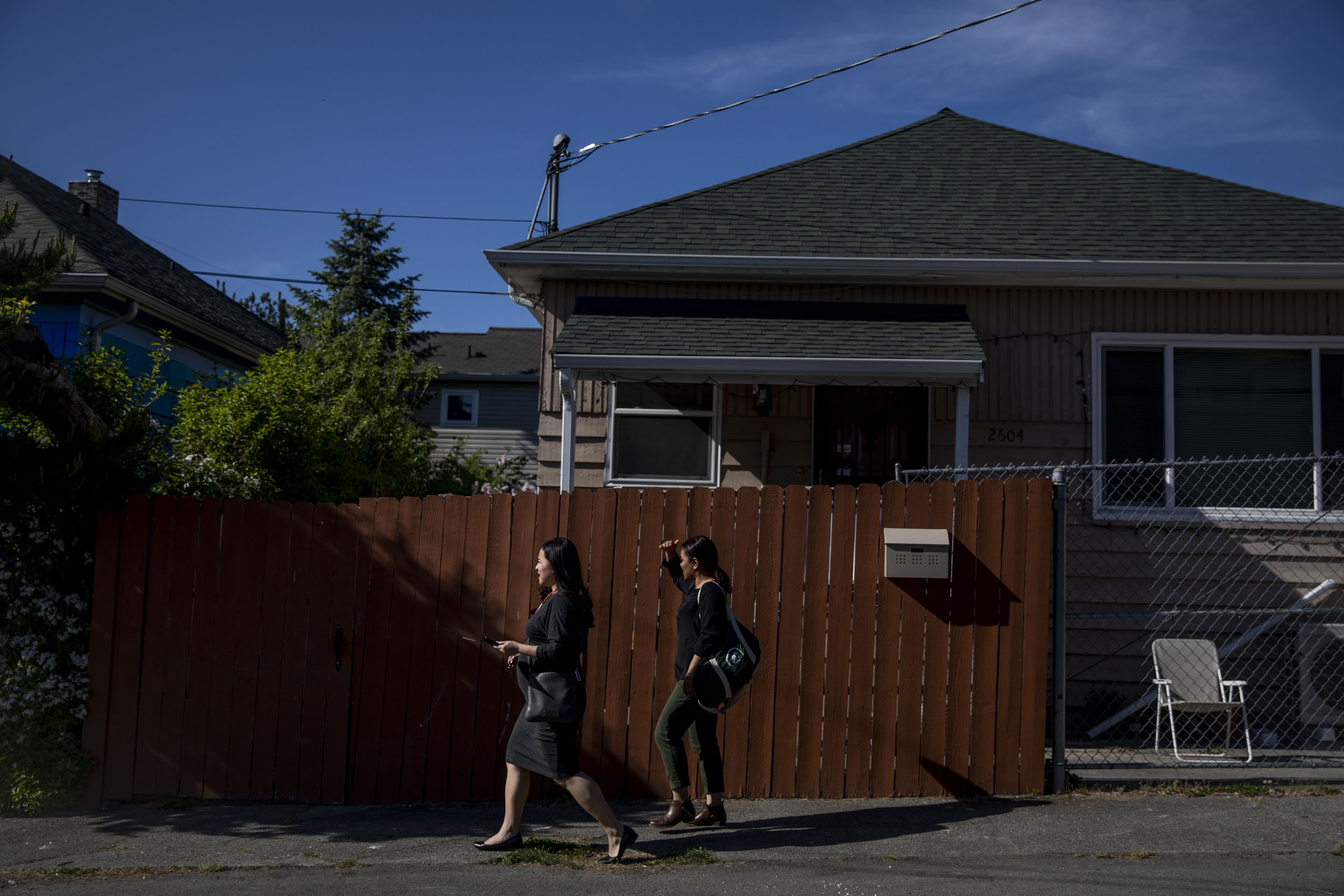 Ami Nguyen usually wouldn’t be able to meet for coffee in the middle of a Thursday, but she had taken a few vacation days to focus on her campaign.

A candidate for the District 3 seat on the Seattle City Council, Nguyen is also working full time as a public defender in King County’s Involuntary Treatment Court at Harborview Medical Center. Her campaign is skeletal now, but in her off hours and on her days off, she’s been knocking on doors. Her goal, for now, is to qualify for the city’s Democracy Voucher program, which requires getting a base number of donations and signatures.

Logan Bowers is also running for the District 3 position, currently held by Kshama Sawant. He and his wife own Hashtag, a pot store in Fremont, but since he began his campaign, he has scaled back to working fewer than 10 hours a week.

His wife, he said, “is phenomenally supportive and has taken over running our business to free me up to campaign. I wouldn’t be able to run for office without her help and the amazing team we have at Hashtag.”

In a political arena flooded by corporate money and dominated by both a billionaire president in Donald Trump and a onetime bartender from the Bronx in Alexandria Ocasio-Cortez, questions about who is able to run for office — and win — have become even more salient.

Seattle has sought to chip away at the financial barriers to office through its publicly funded Democracy Voucher program. But in races that will be decided by just thousands of votes — or, as was the case in 2015’s District 1 race, tens of votes — having a flexible job or not needing to work at all could provide the time necessary to make important personal contact with voters.

“Everything else being equal and one person has more time to campaign, then all probability is that the person not working has an advantage,” said Ron Dotzauer, a longtime political consultant who is not representing any candidates in the Seattle races.

More than 50 people are now competing for seven seats on the Seattle City Council. The cutoff to file is May 17. That total will be narrowed to 14 people after the August primary. Incumbents already have bowed out of four of those races.

To better understand the balance between campaigning, working and life, Crosscut sent questions to almost every candidate and received responses from 40. The list excludes the three incumbents seeking re-election, who will continue working in their capacity as elected officials.

The candidates were near unanimous in their sentiment that, between home life, work and campaigning, it’s impossible to be equally focused on all. If given the choice, campaigning and family are the priorities. But for those who must work — the majority — what’s lost is time for door-knocking, endorsement meetings, family and sleep.

“In Seattle the paramount pressure is to get to know voters, and that is a very time intensive activity,” said Sung Yang, principal with political consulting firm Pacific Public Affairs, who also is not representing any candidates in the city council races.

On average, candidates estimate they spend 35 hours a week campaigning, although those numbers vary dramatically — from John Peeples in District 6, who said he’s devoting five to six hours, to Brendan Kolding in District 1, who said he spends 80 hours a week on his campaign.

Of the 40 respondents, 14 said they are either not working or are working very minimally during the campaign. Some, like Bowers in District 3, said they were leaning more on their spouses. Jon Lisbin in District 6 said his wife is still working as a nurse at the University of Washington Medical Center. District 7 candidate Jim Pugel said he’s living off of his pension from his years as a police officer, as well as his wife’s salary.

Others have either saved enough or are in a comfortable enough position to not need to work.

“I am very lucky,” said District 4 candidate Cathy Tuttle. “I have enough money to allow me to devote myself full time to learning about the people and major issues in my district.”

Some candidates are still working, but reducing their roles to part-time. District 2 candidate Ari Hoffman has several businesses, including construction and property management outfits, as well as one that rents out blowup, bouncy castles. He said he’s scaling back on his construction businesses while campaigning.

District 3 candidate Pat Murakami is shifting many of the responsibilities of her small computer repair business to her husband. “The campaign is negatively impacting my income from my job as I am self-employed,” she said. “My husband is carrying a huge burden trying to keep up with all our clients.”

Of those who are working as they campaign, some have jobs that allow flexibility. District 4 candidate Emily Myers is still working full-time as a researcher at the University of Washington, but she doesn’t have set hours, so long as she stays on track toward her Ph.D. “I can often do experiments at night or on the weekends after a few hours of knocking doors,” she said.

But for those whose employers don’t allow for schedule flexibility, what’s left are vacation hours, evenings and weekends.

“My campaign has definitely suffered due to the constraints of my demanding day job,” said Andrew Lewis, a criminal prosecutor in the Seattle City Attorney’s Office and candidate in District 7. “I have had to decline numerous invitations to speak to groups during the work day, and often during the week I do not get off work early enough to get out and start hitting the doors in District 7.”

The benefit of having schedule flexibility could be amplified because of the city’s new district-based election system, said Yang with Pacific Public Affairs. The total number of votes available per candidate is one seventh what it was when council member elections were all citywide.

“I think [flexibility] is more significant because the number of votes that’s going to be needed to come out of the primary is not that many,” said Yang.

“City council is about retail politics,” said consultant Dotzauer. “It’s going to be about voter contacts by the candidate himself or herself. The smaller the races the more important the retail.”

It’s now possible for a candidate to knock on every door in the district — and some doors several times. This is especially significant during the primary.

Yet what many see as an advantage is viewed by others as a liability. There are disadvantages to not having a typical job while campaigning, said political consultant Heather Weiner. She’s not representing a candidate for the city council races, but did represent Cary Moon in her ultimately unsuccessful campaign for mayor against Jenny Durkan.

“When I worked with Cary Moon, one of the criticisms of her was that she didn’t have a job and that implied that you must be employed to be worthy,” said Weiner. But Moon, who self-funded much of her campaign, had a depth of experience that couldn’t necessarily be captured in a resume, said Weiner. And she adds that she believes a man wouldn’t have been scrutinized as much for a nontraditional resume.

Weiner supports Tammy Morales in District 2, although she's not working for the candidate. She points to Morales, a community organizer with the Rainier Beach Action Coalition, as an example of what she views as a good combination: having work that dovetails with a candidate’s campaign and allows for communication with possible constituents. “Morales is working full time … with local community organizations and in some ways that’s an advantage for her,” said Weiner.

Incumbents enjoy that same advantage, said Dotzauer — their daily work, which includes frequent communications with constituents, serves as an advertisement.

There are ways to overcome what’s lost as a result of having work obligations — namely volunteers and money, said Yang. And more than anything else is the quality of the candidate.

Being busy with work “doesn’t preclude you from being successful,” said Dotzauer. “But if I had the choice, all other things being equal, give me the time off.”