Latinx vendors and customers wonder if the area flea market will get a second life. 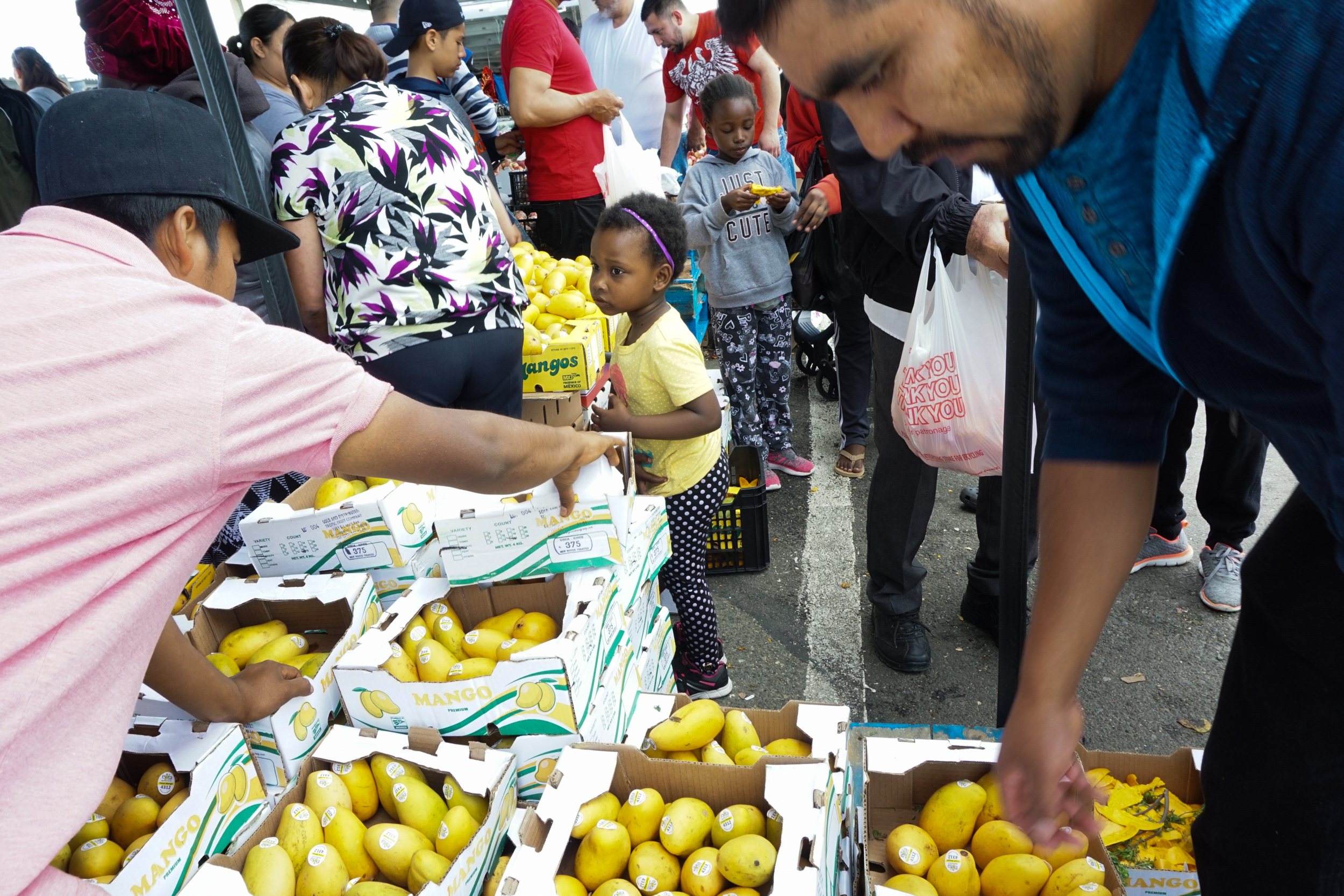 A vendor disperses juicy slices of mangoes while customers purchase other produce at the Star Lite swap meet in Lakewood on May 26, 2019. (All photos by Agueda Pacheco Flores/Crosscut)

LAKEWOOD, Pierce County — Last Sunday, at the entrance of the Star Lite Swap Meet, Franco Garcia played tunes on a harmonica and guitar, for the last time. While patrons passed by, dropping dollars into a little basket, he serenaded the flea market on the eve of its permanent closure.

“OK, gracias amigo,” he exclaims between breaths and strums

Garcia, 66, is a familiar face to many who have visited the swap meet over the years. He started playing guitar for fun in Oaxaca, Mexico. He enjoyed listening to the radio and hearing rancheras and corridos and one day he decided to pick up a guitar.

“The truth is I like music, but I never did it for work, my work is in the fields. But now that I have this issue, I can’t do that so I have to go hard on my guitar,” he says in Spanish about busking as a form of income, adding that he dedicates himself to busking because he has no other form of steady income.

Garcia arrived in Wenatchee in 2005 to work as a day laborer picking pears in an orchard. He injured his back in 2009 and since 2011 has been busking outside the swap meet to make ends meet for him and his wife.

He’s grateful for the support he’s received from the Star Lite community the past eight years.

“I don’t know everyone, but they know me,” he says.

The site of the Star Lite Swap Meet was originally a drive-in theater. It opened in 1948 and, like other decommissioned drive-ins in the area, it became a swap meet that could handle hundreds of vendors at a time. 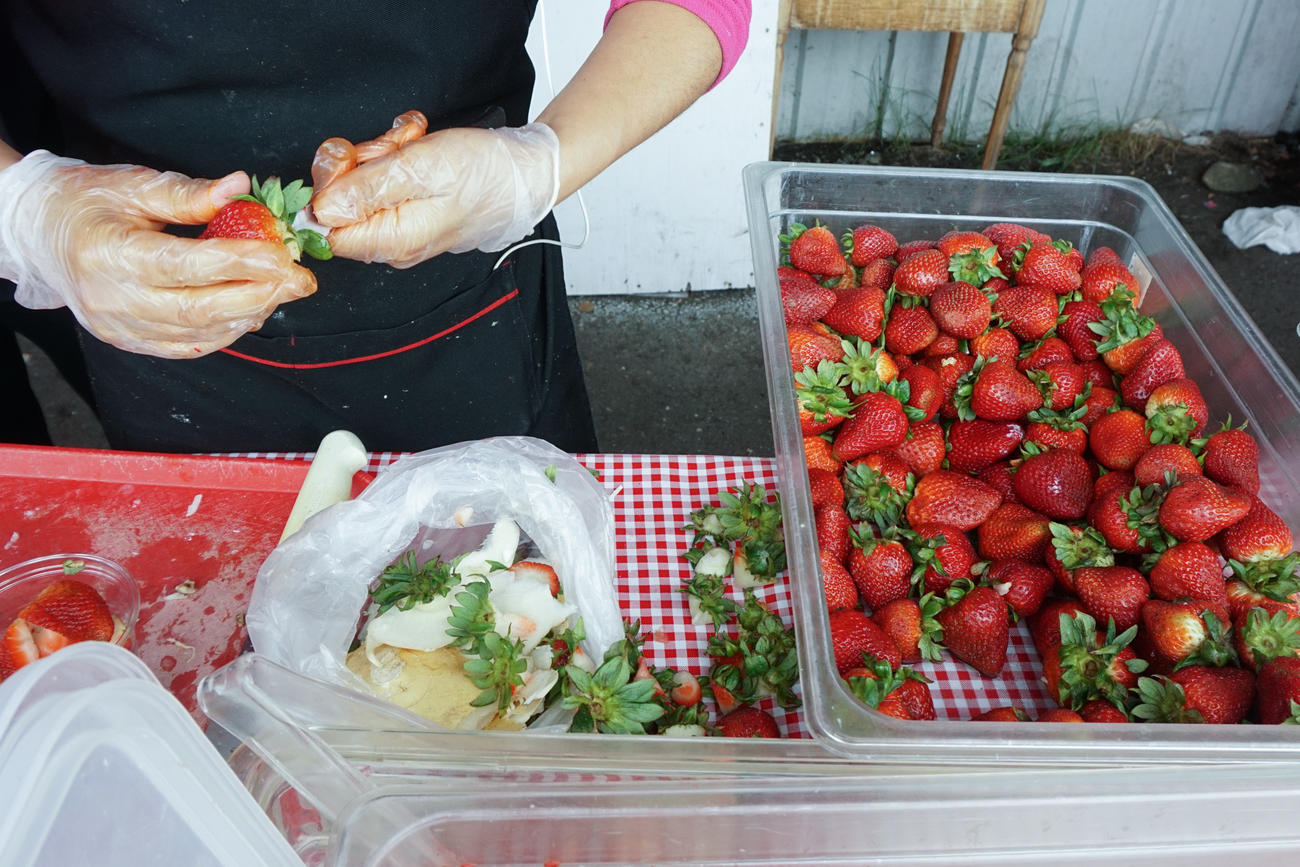 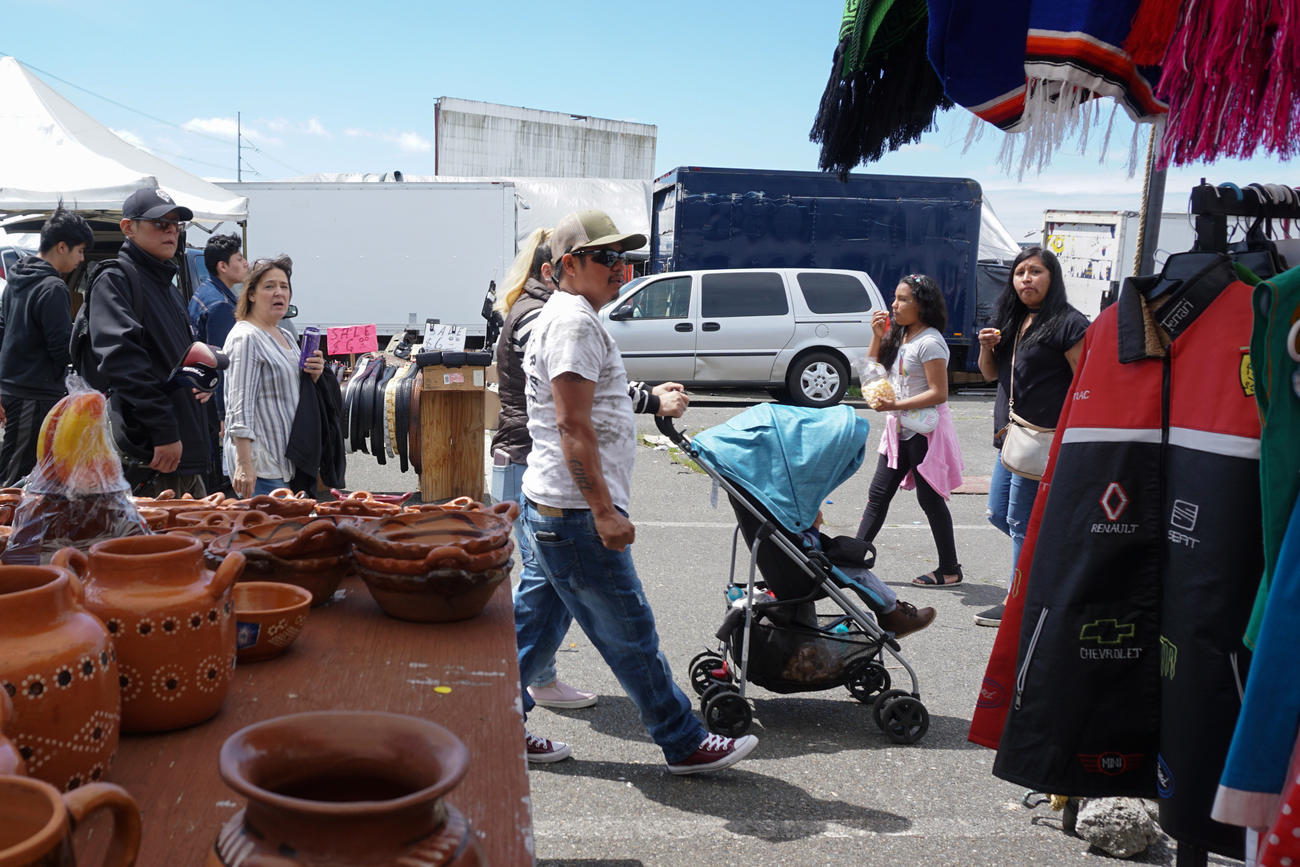 Embroidered dresses, garments, dishware, snacks and other products from Mexico could be found at the swap meet on any given day.

Embroidered dresses, garments, dishware, snacks and other products from Mexico could be found at the swap meet on any given day. 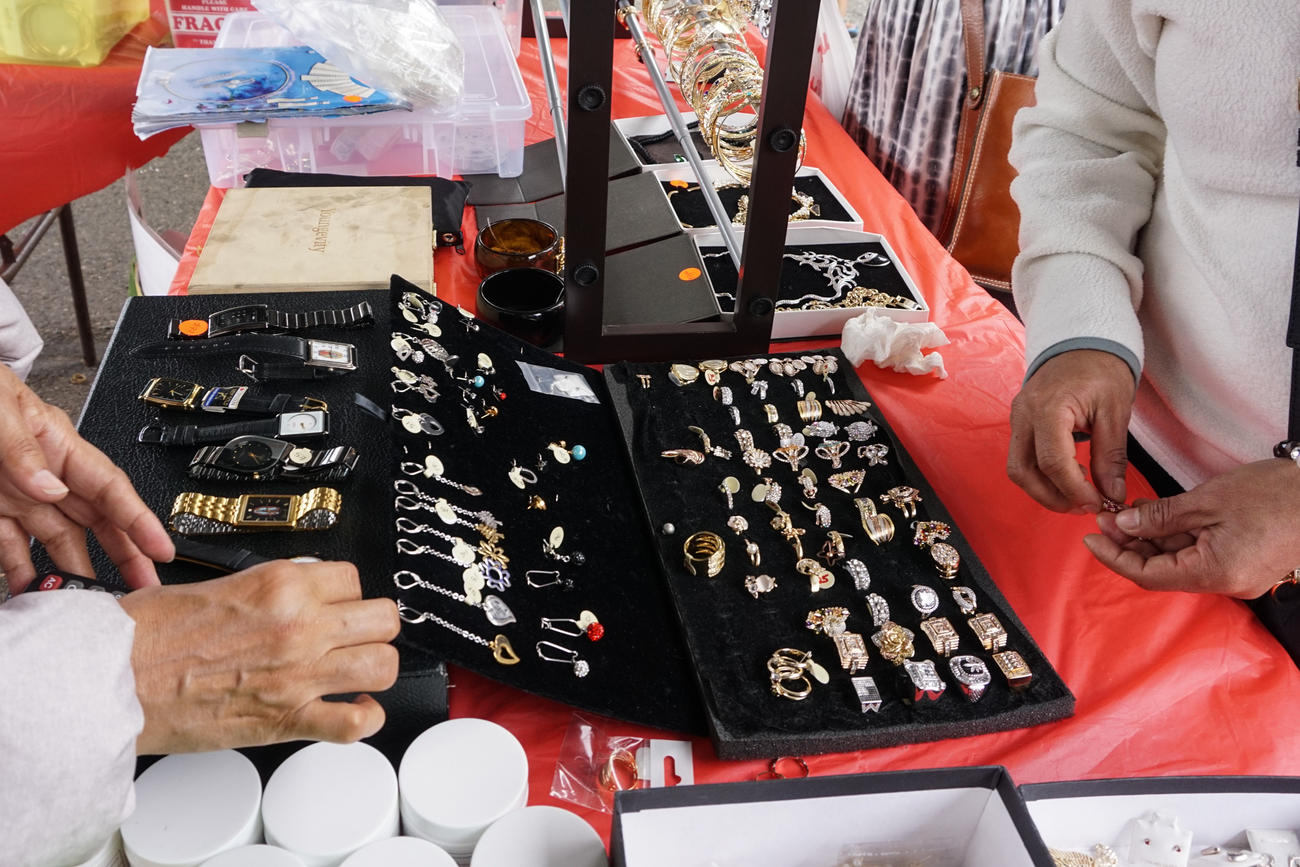 Jewelry stands where people tried on necklaces and haggled prices were a common scene at the Star Lite.

Jewelry stands where people tried on necklaces and haggled prices were a common scene at the Star Lite. 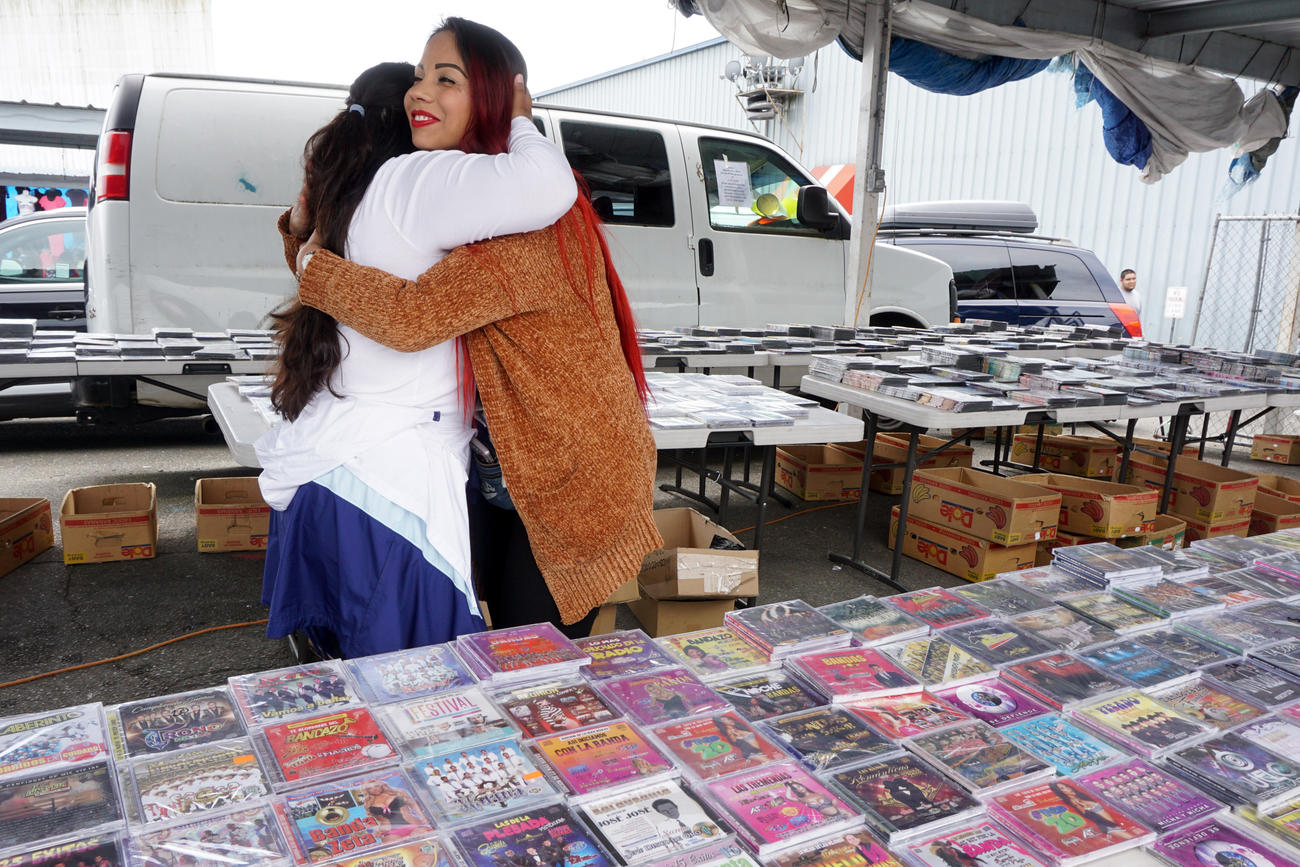 Betsy Rodriguez, who has sold Latin music CDs at the swap meet since 2011, said goodbye to friends and clients on May 26, 2019.

Betsy Rodriguez, who has sold Latin music CDs at the swap meet since 2011, said goodbye to friends and clients on May 26, 2019.

In 2004, the 13-acre plot was bought by Hank Bardon, a tall man with wispy black hair. Bardon walked into the indoor area of the swap meet during Memorial Day weekend, wearing a black buttoned-up shirt with red crosses that looked like it was bought right there and then.

“Do you have more change?” a vendor asks Bardon in Spanish.

“Yeah, whatcha got?” Bardon asks while holding a wad of cash in one hand. “Mo’ fives, mo’ bettah [sic],” he says, making change.

In early May a sign was posted at the entrance of Star Lite informing vendors they had 30 days to vacate. The News Tribune in Tacoma reported in November that Davis Development Services proposed to redevelop the site.

Brynn Grimley, Lakewood’s communications manager, said zoning certifications and other permits had been submitted for review.

“Typically developers do not submit these materials or go to this level of planning (and financial expense) unless they know they will become owner of a property,” Grimley said.

But Bardon doesn’t explain why he’s selling Star Lite, only that he is looking for a bigger plot of land in the south end — Federal Way, perhaps? — to relocate the swap meet.

“But not Seattle,” he says gruffly, before walking away.

Not everyone believes the Star Lite will have a second life.

“It’s not really known where it's going,” says vendor Hector Titla. “I think he could have done more, be more prepared, have a space ready for all of us,” he says about Bardon.

Titla was busy selling his jarritos — handmade painted clay cups and tea sets — while his daughter sold traditional Mexican clothing. A sound system played cumbias, bandas and rancheras. The weather was 70 degrees last Sunday and an aroma of aguas frescas (fruit juices), fresas con crema (strawberries and cream), sliced mangoes and elotes (juicy corn on the cob with mayo, dusted with cheese and chili powder) hung throughout the Star Lite.

Titla has been a vendor here for years. It’s where he taught his children how to “do something” for themselves: selling trinkets and Mexican products.

“This is the good month,” he explains, pointing out that closing at the unofficial beginning of summer is extra tough on his business.

Last Sunday, everything was on sale at discount prices, as vendors rushed to get rid of their products, unsure of where or if they could store things. Some vendors simply opted to pack their houses with whatever product remained.

Like Tania Lopez, who has earned most of her income the past 15 years selling paintings from Jalisco, Mexico. The works feature Frida Kahlo, Catholic saints and haciendas.

“I wanted to have something that represented Latinos and [I thought] people would like to show our country and have it here,” she says.

Lopez says rumors that Star Lite would close began in January. “They didn’t give us any updates,” she says. “They were still charging us for this month and a lot of peoples’ things are still in there. It was unjust.”

Bardon has not responded to repeated attempts to interview him.

Lopez works at a daycare in Auburn and says the swap meet was her reprieve. Moreover, the daycare won’t provide enough income for her to maintain her home, she says.

“We asked Hank if it would close, if it was true. He would just say ‘They’re just rumors,’” Lopez says.

“Did you hear? They’re closing us,” someone says in Spanish.

“We’ve been booted out,” says Pablo Montero de la Sierra, a perfume seller who sprayed both men and women walking past to entice them to purchase a bottle.

Montero de la Sierra grew up in Zacatecas, Mexico, picking cacti, kicking off the needles and eating them raw. Speaking quickly with a Northern Mexican accent he says, “Mexicans, we know how to work hard." He laments the closure of the market despite its success.

Like a true “chilango” from Mexico City, Daniel Carrada makes fun of the circumstances in a dramatic way: “We feel bad, defeated!” he says before breaking out in laughter. “I’m just kidding, but really this is a space for the community and it’s finished, our little piece of Mexican territory.”

Adrianna Torres was walking around the swap meet with her friend Celia Martinez. They started coming to the Star Lite after the Midway Drive-In Swap Meet near Des Moines closed in 2004.

“It’s picturesque. It has its good vibes. We meet with a lot of people we haven’t seen in years,” Torres says. “We could be walking and all of a sudden you see someone you know from back home.”

Surrounded by tables stuffed with CDs, vendor Betsy Rodriguez hugs friends who walk behind the makeshift counters. “Are you coming to say goodbye?” she asks.

Rodriguez says she’s heard some vendors have permission to post up in a parking lot behind the Federal Way Mall, while others are going to el chango (the monkey), a nickname for Tacoma’s B&I Market, now infamous for once showcasing Ivan, the gorilla.

But the end of Star Lite brings solace to one person, Cesar Soria, who has been running a tattoo shop, Underground Tattoo, here for 10 years.

“I’m going back to school, so it’s actually kind of a relief,” Soria says. “Nothing lasts forever,” Soria shrugs and then he offers a tattoo to a customer.