Stereotype-busting is a two-way street for police, immigrant families in this Seattle program 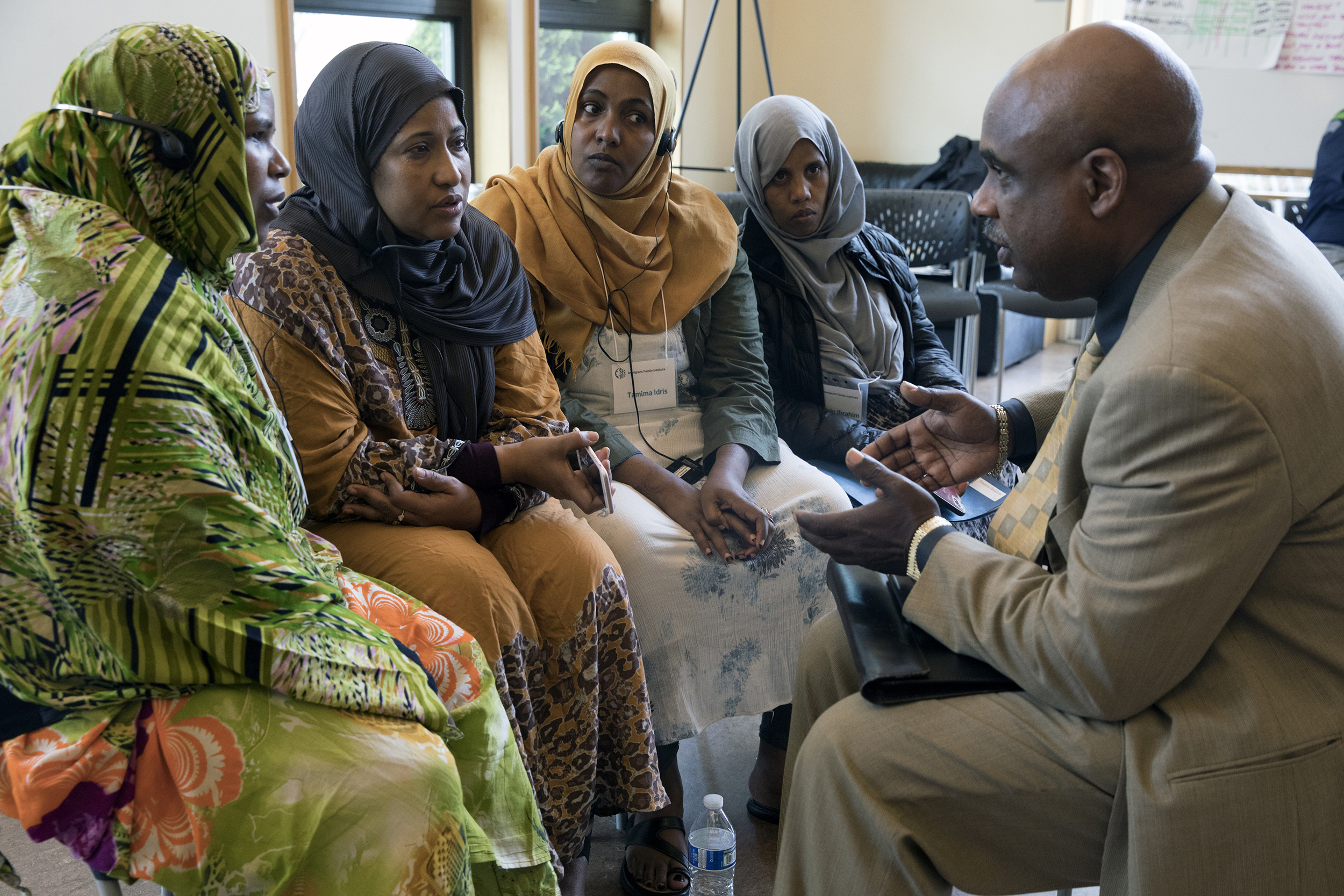 Alrick Hollingsworth of Guided Pathways Support speaks to a group of women during a meeting of the Immigrant Family Institute at the Neighborhood House in Seattle's High Point neighborhood, April 20, 2019. (Photo by Matt M. McKnight/Crosscut)

For the past eight weeks, more than a dozen families — Latino, Southeast Asian, East African — have spent their weekends at a community center learning about juvenile justice and immigrant rights, from and alongside each other and Seattle police officers.

During their attendance at Seattle’s Immigrant Family Institute — a program launched three years ago by educators who noticed a sharp increase in East African youth involved in the juvenile justice system — families spend weeks talking with police officers, especially those who are new and on patrol, about common misconceptions that each group has about the other. The program, which runs for four hours each Saturday, is voluntary for both families and Seattle police.

Amelia Derr, one of the co-founders of the program and a professor of social work at Seattle University, and José Manuel Vasquez, a specialist with the city’s Office of Immigrant and Refugee Affairs, explained that based on community feedback, they chose to focus specifically on immigrant youth 10 to 14 years old.

On a recent Saturday at Neighborhood House, a social services agency in West Seattle, for example, mothers — some of whom wore traditional head scarves — sat with children, fathers, and officers.

In the large conference hall there was constant chatter in Spanish, Vietnamese, Oromo and Somali, as translators worked with the families. A board set to the side had written guidelines: "Don’t make fun of people" — for name, accent or any reason; "respect differences"; "step out of your comfort zone."

The group listened to a former crack addict tell his story about how he became involved in the juvenile justice system.

Keith Hedgepeth, the former drug addict, had run away from home 13 times, he said. His stepfather abused him. He stole to support his drug habit.

“I’ve experienced everything that a kid can and will experience in their life,” he said.

“But now I’m on the other side,” Hedgepeth said confidently, noting that he’s been clean for five years. People in the room clapped.

“I’m pretty much an example that a kid can look at and see there are no excuses to being successful,” he said. 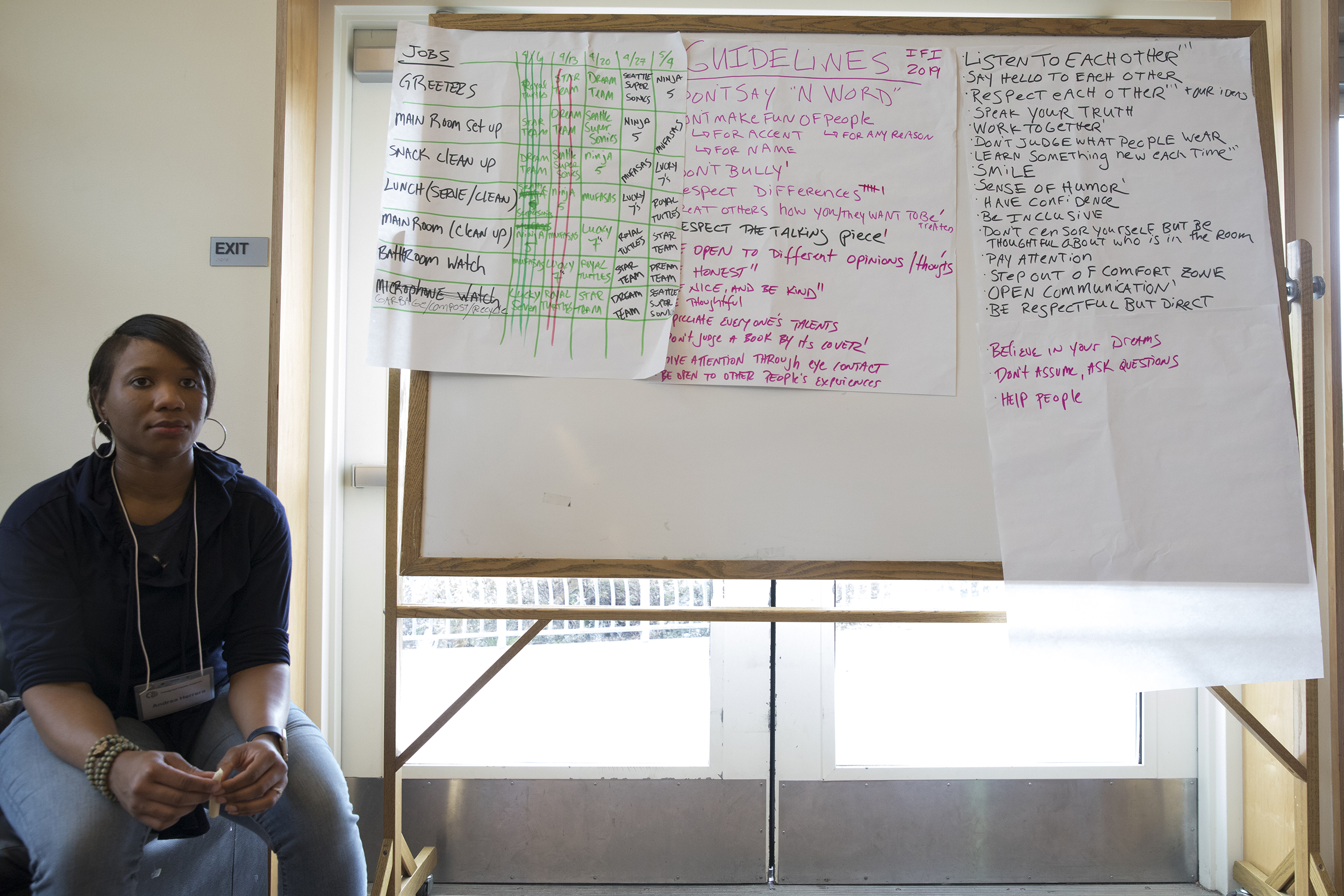 Andrea Herrera sits next to a whiteboard with objectives for the group during a meeting of the Immigrant Family Institute at the Neighborhood House in Seattle's High Point neighborhood, April 20, 2019. (Photo by Matt M. McKnight/Crosscut)

Andrea Herrera sits next to a whiteboard with objectives for the group during a meeting of the Immigrant Family Institute at the Neighborhood House in Seattle's High Point neighborhood, April 20, 2019. (Photo by Matt M. McKnight/Crosscut)

Another speaker chosen by those who run the program was Andrea Altheimer, a mother of three fresh out of prison after serving 20 years. She said that when she was locked away she noticed the population inside grow younger and younger.

“It takes a village to raise a child,” she said. “I’m seeing that village right here, and I appreciate that.”

“If I had a voice when I was a child, then maybe I wouldn’t have gone in the direction I had gone,” Altheimer said. She said she was raped when she was only 12.

Then the children began asking questions:

What is a felony?, they asked. And a misdemeanor? What does one do in juvenile detention? Can you pay bills or have a job when you’re in jail?

In addition to answering the basic questions raised, moderators Derr and Jabali Stewart, director of intercultural affairs at the Bush School, navigated points made by police. At times, the room was tense.

When Altheimer mentioned arrest quotas, officers pushed back. There is no quota, multiple officers standing in the back of the room said in unison. It’s a lot more work to arrest people than not, one officer explained. So quotas don’t make sense for the department, he suggested.

“We’re all being painted with one brush,” said another officer. One parent wondered aloud how to best discipline children, especially in the face of peer pressure. An officer emphasized that he believed sometimes time away in prison, such as for juvenile violent offenders, is necessary.

Another police officer made the contentious point that police shootings often never would have happened if the victim had simply followed orders.

Hedgepeth, the recovering addict, interjected. Despite his past, he said, his son had grown up to be a police officer in Chicago. His advice to the officers in the crowd? Get involved in the community.

“He humanizes himself,” Hedgepeth said, referring to his son’s approach to his job. “You guys are just as much part of the community as we are.” 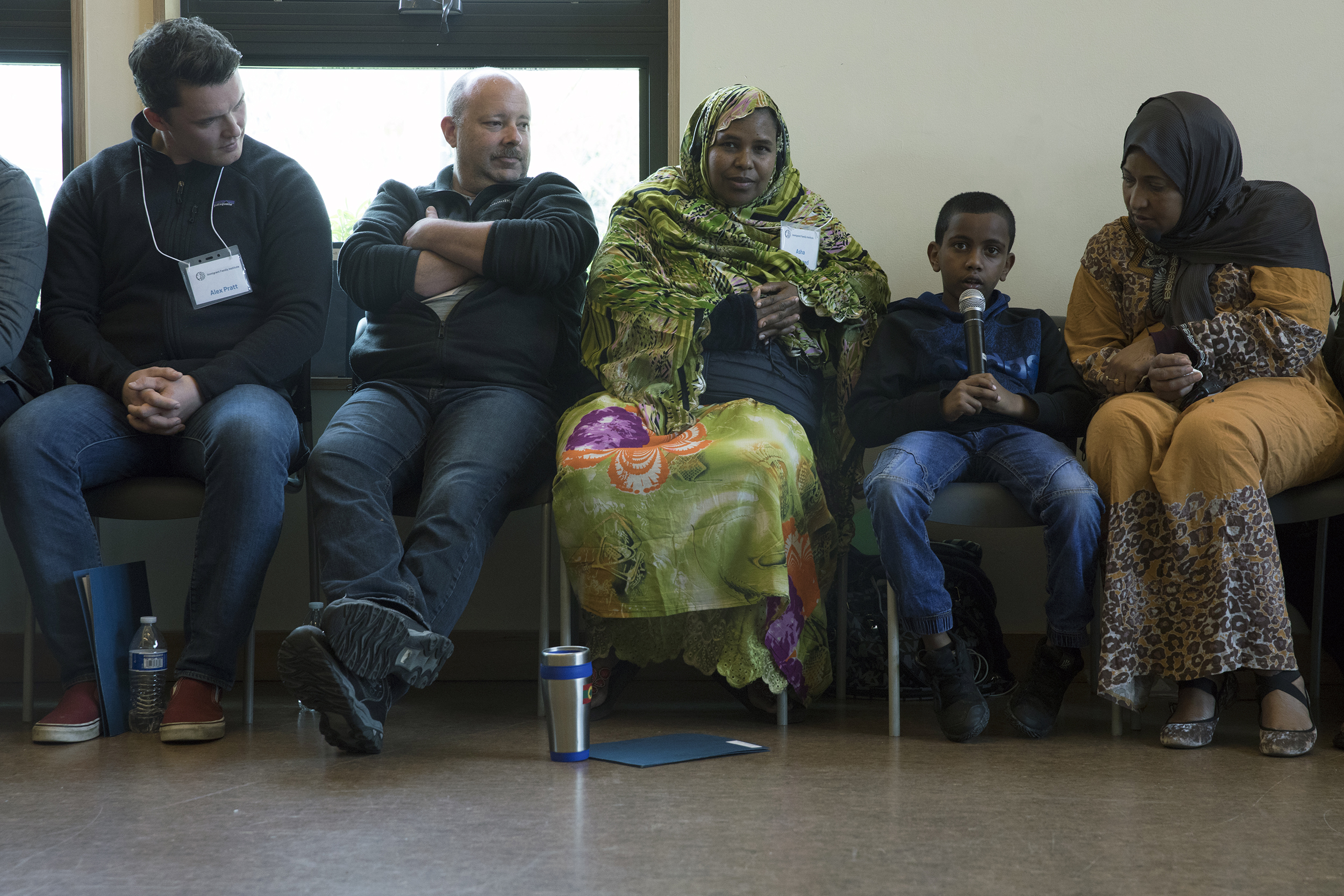 One police officer in the program, who asked not to be named, told Crosscut that he hoped that future sessions would be more interactive, allowing officers to field questions more directly from participants. He said he had, after all, enrolled in the program because he missed the immigrant population with whom he used to work.

He also said that although he thought the program was good, it had failed to answer some of the group’s basic questions about public safety and the juvenile justice system, especially given that many of the participants are so young.

Dora Martinez, a mother of three sons who participated in the program, said she had learned about the institute after she spotted a flyer posted near her South Park home. The Immigrant Family Institute, Martinez said, has helped her become more comfortable with the idea of contacting police, and asking for an officer who speaks Spanish. Before, even after experiencing a car accident, for example, Martinez had hesitated.

Now, she and 16 other families are set to graduate from the program on Saturday. The families are then invited to take part in the Strengthening Families Program, which focuses on parenting skills.