WA officials, feds have a plan to save forests and salmon 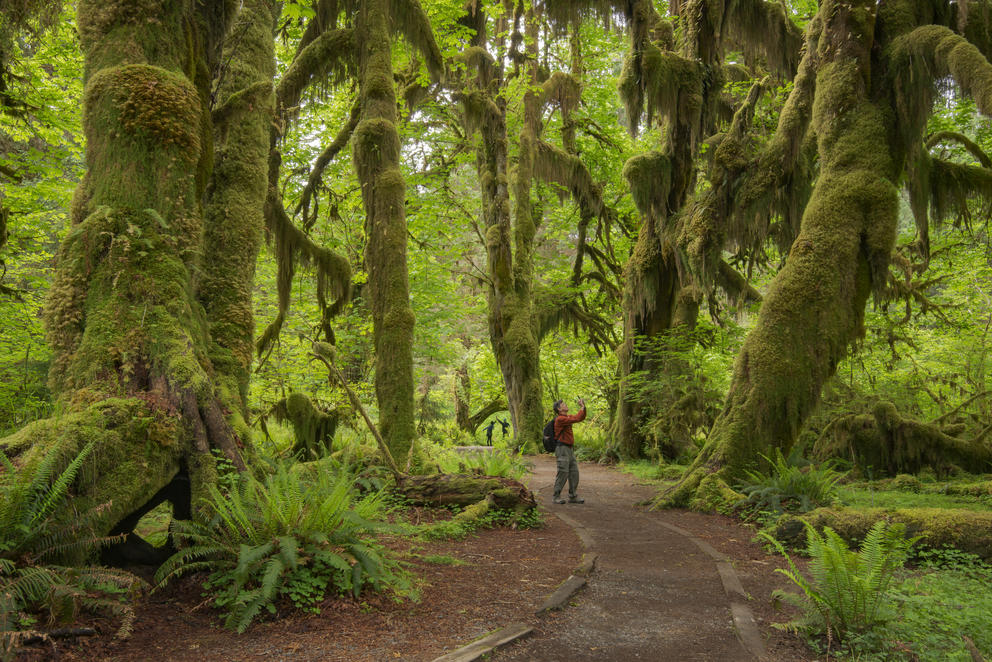 Hall of Mosses Trail in the Hoh Rainforest in Washington's Olympic National Park. (Photo via AP)

State and federal officials signed an agreement Wednesday to protect Washington’s forests and wildlife. The plan would combine resources to fight destructive wildfires, threats to forest health and challenges faced by salmon and orcas.

“If we’re going to prevent the Evergreen State from turning brown, we must begin to coordinate, collaborate and work tirelessly to change the trajectory of these forests as one team,” said Hilary Franz, Washington’s commissioner of public lands and head of the state Department of Natural Resources.

The Shared Stewardship Agreement was signed by officials from the Department of Natural Resources, the Washington Department of Fish and Wildlife, the U.S. Forest Service and the regional forester.

The plan establishes a framework to reach certain goals. It seeks to make forests less vulnerable to wildfires, insects, disease and droughts. It also would protect the waters of Puget Sound and protect fish and wildlife.

The agreement would allow the various departments to take more of a landscape-based approach to conservation, said Kelly Susewind, director of the state Department of Fish and Wildlife.

“We tend to drive at these things in our narrow little previews and do good work, but we do not connect it on the landscape-scale,” Susewind said.

Timing is also key, Susewind said, as the climate warms and more people move into the state.

The goal would be to move away from small, individual forest projects to larger, more targeted restoration efforts.

The stewardship strategies are the result of a U.S. Department of Agriculture Forest Service report last August that said the federal government would work with states to prioritize the most effective forest projects. It would “use all available tools” to manage forests, including timber harvest, noncommercial forest thinning and prescribed fires.

“We know the health of our forests are declining. The benefits of the watersheds and wildlife habitat that come off those forests are in peril. We can’t keep doing the same thing we’ve always done and expect a different outcome,” said Forest Service Chief Vicki Christiansen.

These types of large-scale partnerships are important for the amount of restoration work that needs to happen in the state, said James Schroeder, director of conservation at The Nature Conservancy in Washington.

Traditionally, one landowner would complete forest restoration projects on their land, he said. Those ownerships are patchy. You could walk through Department of Natural Resources land onto Department of Fish and Wildlife land on one hillside. Usually that meant forest projects were smaller, based on owners and not on ecology.

Schroeder said he’s optimistic this partnership will make it easier to do cross-ownership restoration.

“It positions us to do more, bigger projects in the future,” Schroeder said. “The idea is that you solve a problem that is interconnected by taking an approach that brings partners together.”

Crosscut is collecting questions from readers to help shape a conversation between Soledad O’Brien and Miles O’Brien about homelessness and coronavirus in Seattle.