WA will take care of you when you’re old. Here’s how.

The state is reportedly the first in the nation to provide a long-term care benefit, which will help pay for nursing care for the old and infirm. 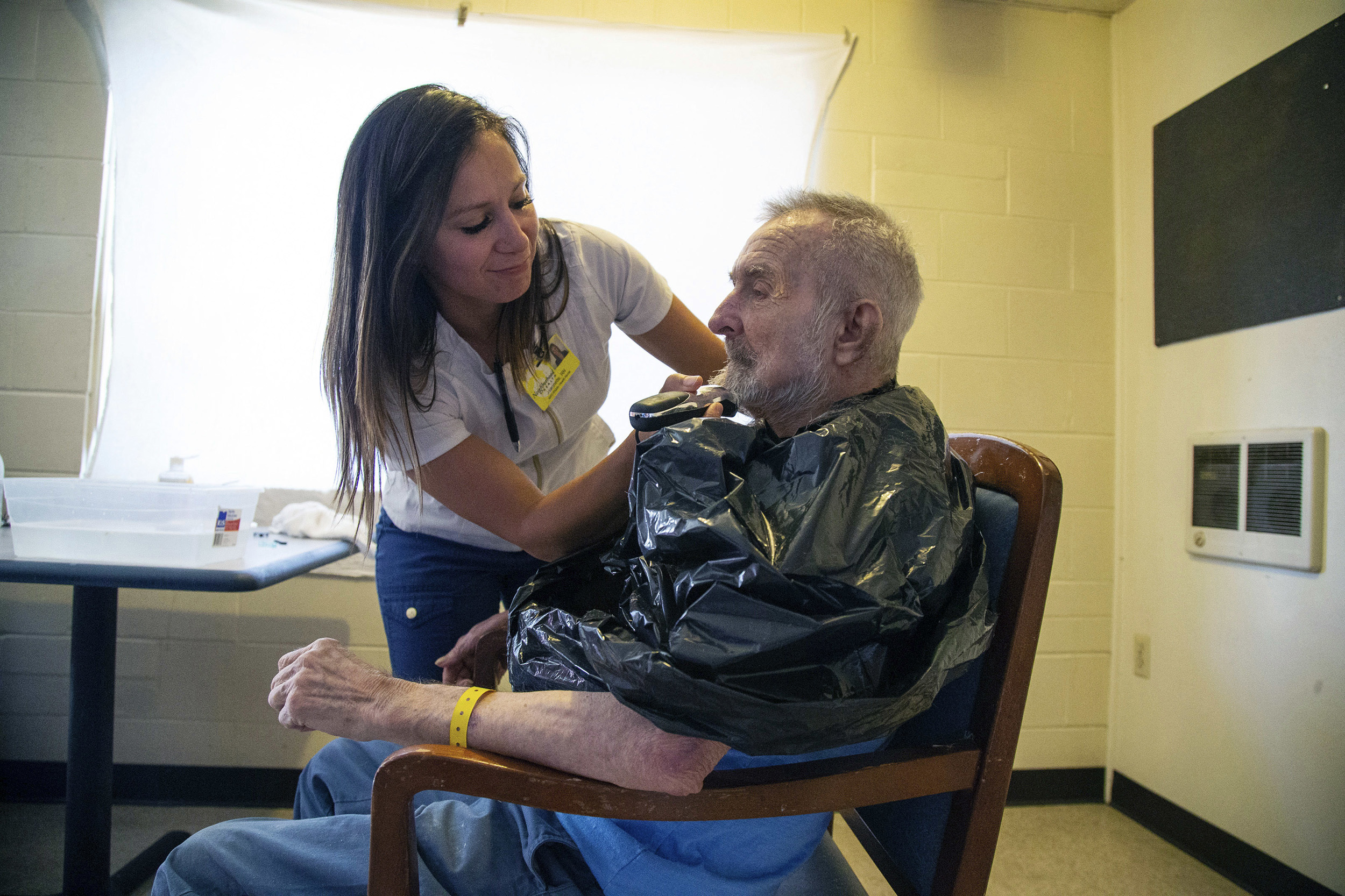 Adriana Hutchings was 33 and pregnant with her first child when her mother’s health began to deteriorate. Suddenly, Hutchings was faced with a choice: helping care for her mother in Olympia, or continuing her life and career in Seattle. Ultimately, Hutchings left her business-development and marketing job to move south and assist her mother. The move allowed her to also care for her grandmother, who lived with Hutchings' mom at the time and suffered from dementia.

That was 2003, and the beginning of 14 years Hutchings would spend as a full-time caregiver — not just for her mom and grandma, but also for her father, who fell ill later.

“I was really happy to do it, but it was a strain,” Hutchings recalled this week. “And in the meantime, I was starting to have my own family. Juggling that with taking care of my elders was really difficult.”

She said the situation would have been easier if her family members had the resources to hire part-time caregivers, as well as to install ramps and lifts at home to help them get around more easily.

A law recently passed by the Washington state Legislature aims to provide that kind of help. The Long-Term Care Trust Act will provide up to $36,500 per person to pay for nursing care or other services for people no longer able to care for themselves.

That can include not just the elderly, but also younger people who suffer a brain injury or other conditions that cause them to require assistance with daily tasks.

What benefits are included?

The new law, House Bill 1087, will allow qualified individuals up to claim $100 per day in benefits, for a lifetime maximum of 365 days. The benefits can be spread out over longer than a year if a person spends less than the maximum daily amount.

The money can be used to pay for several types of help, including a visiting caregiver that provides in-home services, care in a nursing facility, meal deliveries, or even residential improvements that can help people avoid having to move out of their home. The benefits can be applied to the cost of staying in an adult family home, transportation and other types of support for people with dementia.

For Ruth Egger, that type of benefit would have been a great relief three years ago, when her father fell and broke his hip at the age of 88. After the fall, Egger’s 88-year-old mother was taking care of her father, helping him with certain tasks he could no longer perform on his own, such as getting dressed and managing his medications. But the stress of providing round-the-clock care took a toll on her mother’s health, Egger said.

When her father was at his worst, Egger would drive about a half-hour from Seattle to Issaquah and back multiple times a week to help her mother and father with tasks around the house, as well as taking her parents to medical appointments.

Had the Long-Term Care Trust Act been in effect then, Egger said, “They could have hired someone to help him shower twice a week and come in every morning to help get him dressed.”

“That would have been very helpful for them,” she said.

The state will start paying out the long-term care benefits in 2025. Over time, the benefit amount will increase with inflation.

How far does the benefit go?

The $36,500 lifetime benefit could pay for an in-home caregiver to assist someone for 20 hours a week for more than a year, according to a state report from 2017. It would fall short in paying the full cost of a year in an assisted living facility or nursing home, however. Nursing home care can cost as much as $90,000 or $100,000 per year, the state report estimated.

Alternatively, the benefit could cover about five or six months of round-the-clock care in an adult family home, or a few months of intensive care, plus several additional months of part-time, residential visits, said Jason McGill, the governor’s health policy adviser. McGill’s 94-year-old grandmother, who broke her leg badly in January, is now recuperating in an adult family home at a cost of about $6,000 per month, he said. That type of care will be covered under the new program.

Cathy MacCaul, the advocacy director for AARP Washington, said the benefit can last even longer for people who need less intensive care. She estimated it could pay for about two years of periodic in-home visits, for instance.

The money also can go toward training and compensation for a family caregiver. That can help alleviate financial stress if a family member has to reduce the hours they work or quit working altogether to help care for a loved one, advocates said.

How is it paid for?

The state will impose a 0.58 percent payroll tax, which will be paid by employees beginning Jan. 1, 2022. That money will be used to bankroll the long-term care benefits program. Employers aren’t required to chip in any portion of the payroll tax — only workers are.

People who can demonstrate that they already have long-term care insurance are exempt from paying the payroll tax premium.

To be eligible for the new long-term care benefits, you must require help with three aspects of daily living. Those include activities such as bathing, getting dressed, eating, using the toilet, and managing medications.

Adults can qualify for benefits regardless of their age, as long as they also meet the work requirements. That means working and paying the payroll tax for three of the past six years. Alternatively, a person can qualify if they work and pay the premium for 10 years total, as long as at least five of those years of work are uninterrupted.

To claim benefits, you don’t have to work full time. Working 500 hours in a year — or an average of 10 hours a week — is enough to meet the eligibility requirement in a given year.

What about Medicare and Medicaid?

Having a home, savings or income from a pension is enough to make many people exceed Medicaid’s strict income requirements, said McGill, the governor’s policy adviser.

That has meant that many seniors have to spend down all of their assets before being able to access long-term care support through Medicaid. About 11 percent of people in Washington who apply for Medicaid’s long-term care assistance fall into this category, according to the state’s analysis.

Under the current system, “We basically expect people to spend themselves into poverty before they can get any long-term care,” said state Rep. Laurie Jinkins, D-Tacoma, the prime sponsor of the new law. That will change under the new long-term care program, she said.

“What I think it will do for people will be transformative,” she said.

Who is left out?

Current seniors who are already out of the workforce largely will not qualify for the new long-term care benefits. MacCaul, the advocacy director for AARP Washington, said there was some discussion about creating a way for current seniors to buy into the program, “but when we did the actuarial analysis, it was not financially viable.”

“It became prohibitively expensive, and the payroll tax rate would have gone up hugely,” she said.

Who else does this?

Apparently, Washington is leading the way among states. Samantha Scotti, a health program specialist at the National Conference of State Legislatures, said she’s unaware of any other state in the nation that has a long-term care insurance program like the one Washington just enacted. “It does appear unique,” Scotti said this week.

While a few other countries — notably Denmark, Japan and Sweden — offer long-term care programs, “there are no other states that have anything like this,” said MacCaul.

“It was a very bold statement by our legislators to say, ‘We’ve got to do something to address this issue, because if we don’t take action now, we are going to overburden our state Medicaid system,’” MacCaul said. Otherwise, she said, “We are going to have thousands of seniors that need assistance, and there’s really no support we can really identify.”

Who was against it?

Business groups were split on the legislation, with the National Federation of Independent Business (NFIB) expressing concerns at various points throughout the process.

Patrick Connor, the NFIB’s Washington state director, said he remains unenthusiastic about another tax that will reduce employees’ paychecks, as well as businesses having “one more administrative burden.”

Already, businesses and employees are paying increased payroll taxes to support the state’s new paid-family leave program, which will start paying out benefits next year.

Connor said he would like to see stronger protections — such as an amendment to the state constitution — that will help ensure the payroll tax money for both programs is spent as intended. While the long-term care bill includes language specifying how the money can be used, without a constitutional amendment, Connor said, lawmakers can more easily change that later.

“When it’s a special assessment on workers’ payroll, those workers deserve the certainty of knowing those dollars are being used for those intended purposes, and not diverted,” Connor said.

Why did WA lawmakers decide to act now?

Recent state reports have laid bare the elder-care crisis that could lie ahead for the state’s aging population. By 2030, the number of people in Washington over the age of 85 is expected to double, according to the state Department of Social and Health Services.

By 2040, about 22 percent of Washingtonians are expected to be over the age of 65. By contrast, in 2016, seniors in that age group made up only 15 percent of the state’s population.

“Seventy percent of people are going to need some sort of long-term care once they reach the age of 65. And 90 percent have no plan for that,” said Jinkins, the prime sponsor of the new long-term care law.

By creating a worker-funded program now, the state will not only help people afford care — state officials will also avoid hundreds of millions of dollars in future Medicaid costs. State officials forecast that, at the current pace, demand for long-term care through Medicaid will increase by 91 percent over the next 20 years.

Meanwhile, a consultant’s report found that implementing the long-term care program will save the state about $400 million per year in Medicaid costs by 2050.

Correction: An earlier version of this story misstated the vote count on the long-term care bill. Republican Sen. Judy Warnick supported the measure.