WA’s new climate laws give Inslee a boost. But will they help his White House bid?

The longshot presidential candidate is pinning his hopes on the Washington Legislature's recent actions to combat climate change. 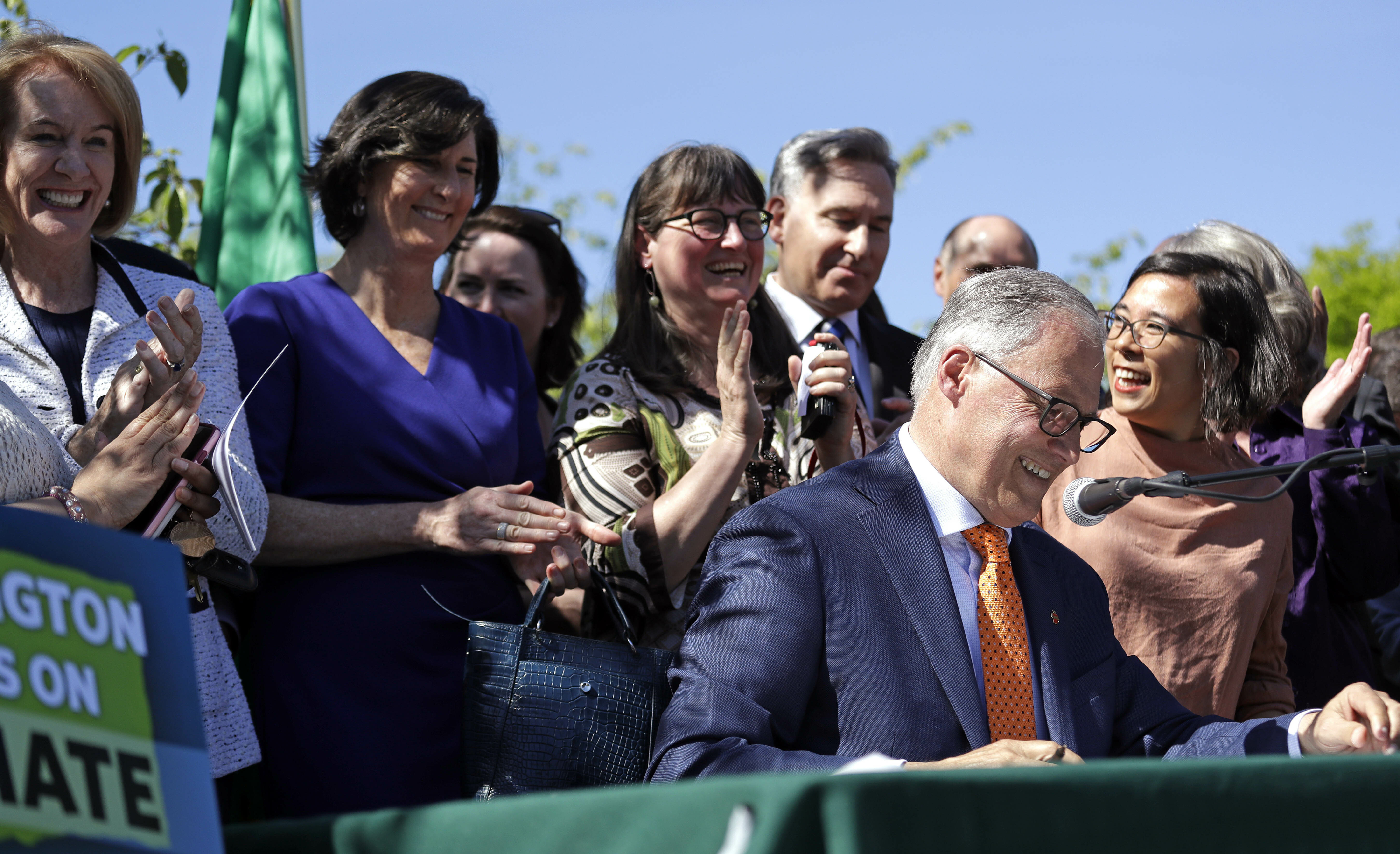 Washington Gov. Jay Inslee, seated right, is applauded as he signs a bill addressing climate change on May 7, 2019, in Seattle. Inslee, who is seeking a path to the White House on a message focused on climate change, signed a measure that makes Washington state the fourth in the nation to establish a mandate to provide carbon-free electricity by a targeted date. (Photo by Elaine Thompson/AP Photo)

In the past six years, Washington Gov. Jay Inslee has seen few of his proposals to cut greenhouse gas emissions actually come to fruition. In March, when the second-term Democrat launched his campaign for president, he vowed to make fighting climate change the nation’s top priority — but, even then, he had few legislative wins to point to in his home state.

Now, he can say that is no longer the case. On Tuesday, Inslee signed into law five proposals aimed at curbing Washington’s greenhouse gas emissions.

The largest piece of the package is a plan for the state to eliminate coal-fired power by 2025 and to move to 100 percent clean electricity by 2045.

The other bills Inslee signed on Tuesday will expand electric vehicle incentives and infrastructure; establish new energy efficiency standards for buildings and appliances; and restrict the use of hydrofluorocarbons, which are greenhouse gases used for refrigeration and air-conditioning.

Together, the measures are projected to reduce Washington's annual greenhouse gas emissions by 14 million metric tons by 2035, a 17 percent reduction from what is already expected to occur. Inslee’s office said those reductions are the equivalent of taking 3 million cars off the road.

For Inslee, however, the bills also accomplish an important political goal: burnishing his reputation as the presidential candidate who not only talks a big game about fighting climate change, but can deliver.

Until now, Inslee has had limited success on that front. His earlier proposals to tax carbon emissions or enact a cap-and-trade program failed to advance in Washington's Legislature, where the Senate was controlled by a mostly Republican coalition between 2013 and 2017.

All of that could have posed a challenge for Inslee during his quest to convince the nation he is the best candidate to reverse the pattern of pollution that is driving global warming.

With the bills Inslee signed into law on Tuesday, however, he is better able to make his case on the national stage, said Margaret O’Mara, a University of Washington history professor who has written a book on presidential elections.

“When you think about other governors who have run for president and successfully won, they have taken a record in their home state and parlayed that as kind of a proof point nationally,” O’Mara said Tuesday.

Bill Clinton, for instance, ran on a platform in 1992 that included welfare reform, “and pointed to what he did in Arkansas” as governor, O’Mara said.

With Inslee competing against 20 or so other Democrats to become the party’s presidential nominee, “He needs to be able to point to a series of legislative accomplishments,” O’Mara said.

“Simply being able to point to being a leader on climate and investing his political capital statewide in that — it gives him additional credibility,” she said.

Inslee had a little help, of course. Big Democratic wins in last fall's election gave Democrats strong majorities in both chambers of Washington's Legislature this year, helping push the governor's proposals to the finish line.

Already, Inslee's campaign has rolled out a environmental policy agenda that looks to build on components of the state’s new clean-energy plan.

His national plan borrows key elements from the legislation he signed into law on Tuesday, including requiring utilities to move to 100 carbon-neutral power by 2030. That’s the same deadline set in Washington’s new clean-energy law, Senate Bill 5116. Inslee’s presidential platform also calls for increasing the energy efficiency standards of buildings, which is the main focus of House Bill 1257, one of the other bills he just signed.

Had those bills not cleared Washington’s Democrat-controlled Legislature, Inslee would have had a tougher time talking up his achievements on the national talk show circuit, said Cornell Clayton, the director of the Thomas S. Foley Institute of Public Policy and Public Service at Washington State University.

Shortly before Inslee signed the climate-related measures into law on Tuesday, he was filming a TV segment that promoted the bills on MSNBC.

“What this allows Inslee to claim is that, as governor, he has a realistic plan for addressing climate change that has legislative specifics in it and has actually passed into law,” Clayton said.

“He doesn’t just have a vision, he’s got something actually done — so when Beto takes his lines, he can say he’s actually doing stuff," Donovan said, referring to a recent dust-up in which O’Rourke used language similar to that used by Inslee to talk about climate change.

Donovan said U.S. senators or representatives, who make up a large portion of the Democratic candidate pool, may have more difficulty pointing to the same types of “executive accomplishments" that Inslee can now claim.

Hays, who did campaign work for Inslee's opponent in the 2016 governor's race, noted that some of the greenhouse gas reductions promised under Inslee's new legislation won't be realized for many years.

“According to Beto O’Rourke, we are going to be dead before they even kick in,” Hays said Tuesday.

Even with the new laws in place, Washington state is still projected to miss its 2035 target for reducing greenhouse gas emissions, by about 1.5 million metric tons of emissions per year. Those goals, written into state law in 2008, call for reducing pollution to 25 percent below 1990 levels by 2035.

If the state were to aim for the more ambitious goals set by the international Paris climate accord, that would mean adopting even more aggressive targets.

One of Inslee's other key climate initiatives heading into this year's legislative session, a low-carbon fuel standard, also failed to advance before lawmakers adjourned April 28.

None of that detracted from the celebratory mood Tuesday, however, as Inslee signed the new measures into law amid a crowd of supporters.

It remains unclear how much of a priority national voters will place on combating climate change when it comes time to cast their ballots. Clayton, the WSU professor, said recent polls are showing that Democratic voters are starting to view the fight against climate change as a much bigger issue than they have in the past. An April CNN poll found that 82 percent of Democratic voters and left-leaning independents said it was "very important" that the Democratic nominee for president take aggressive action to address climate change.

The electorate as a whole, however, remains somewhat indifferent, said Christopher Parker, a University of Washington political science professor. He cited a recent Gallup poll that ranked climate change as voters' eighth most-important concern, outside of economic issues.

“It’s too low a priority to make any difference,” Parker wrote in an email Tuesday, when asked about Inslee. “I’m convinced he’s running for a cabinet position, perhaps Interior [secretary].”

At the same time, Donovan, the WWU professor, said the bills Inslee signed into law Tuesday appear to represent more action on climate-related issues than Washington state has seen in a while. For Inslee, that's far better than emerging from the legislative session with little to show for it, Donovan said.

“I was actually surprised they got something this comprehensive done,” he said.