WA's paid family leave is less than 9 months away. Here’s what you need to know 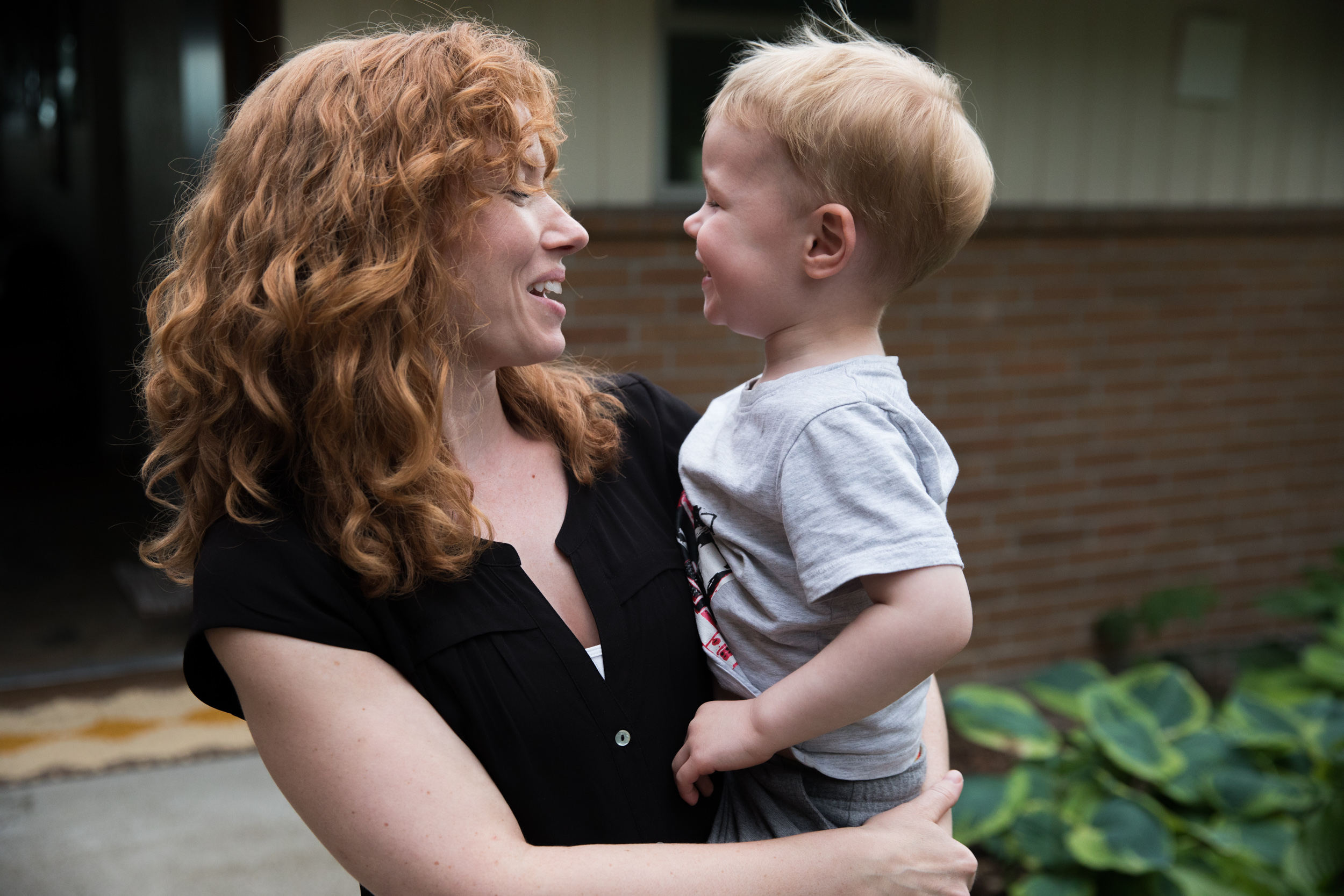 Claire Bellefleur smiles at her 3-year-old son, Lowell Brabant, at their home in Skyway, Wash., on May 22, 2019. After giving birth to Lowell, Bellefleur had to take unpaid time off to bond with her newborn. But she and her husband now are expecting a second baby, and will be eligible for paid leave through a new state program. (All photos by Matt M. McKnight/Crosscut)

Claire Bellefleur knows what it is like to have a baby without paid maternity leave. When the 36-year-old lawyer gave birth to her son, Lowell, about three years ago, she and her husband had to scrimp and save so she could take time off work to spend with their newborn. “It was incredibly, incredibly stressful,” Bellefleur recalled this week.

Now, Bellefleur is about 10 weeks pregnant with her second child. But with their new baby, she and her husband won’t have to worry about paid time off. It's guaranteed.

That’s because starting in January, Washington state’s new paid family leave program will kick into high gear. The benefits will allow Bellefleur and other parents of new arrivals to take at least 12 weeks off to stay home and bond with their children — all while receiving pay that amounts to a significant portion of their regular income.

“The worry about everything isn’t there as much this time,” said Bellefleur, who lives with her family in Skyway. “It’s not as terrifying.”

The Washington state Legislature passed the law in 2017, giving businesses and the state almost three years to prepare. Now, the time when people can actually claim the benefits is fast approaching. Any family at the very beginning of a pregnancy, or in the process of adopting a child who could possibly arrive in the new year, is likely to qualify.

Here are some of the most important things to know about Washington’s new paid-family leave program, especially if you have plans to grow your family in the coming months or years.

To take paid time off through the family or medical leave program, a person first has to have a qualifying event. Childbirth counts, as does becoming a new father. So does adopting a child.

People can also take the paid time off to help care for a family member who becomes ill or has a medical emergency. They can take time off for their own medical needs, too. A doctor will need to attest that the person or the family member has a serious medical condition (giving birth qualifies).

The other main requirement involves working a certain number of hours. To qualify, you must have worked 820 hours over the preceding year before taking benefits.  Alternatively, you could qualify if you worked 820 hours in the first four of the past five completed calendar quarters.

The level of benefits

During paid family or medical leave, workers can get up to 90 percent of their regular wages replaced. As a rule, the benefits run 12 weeks, but can be extended to 16 or 18 weeks in special circumstances, such as for a pregnancy with medical complications.

Kristin Rowe-Finkbeiner, the executive director and CEO of MomsRising, called that a “progressive wage benefit,” which she said took a lesson from what worked and didn’t work in other states.

In California’s early experience, for instance, “The wage replacement levels were not sufficient as a percentage of wages to allow lower-income workers to take time off,” Rowe-Finkbeiner said.

She said that shouldn’t be too much of a problem in Washington, where officials approved what she called “a really strong policy.”

The maximum benefit amount anyone can receive is $1,000 a week, no matter what they normally earn at their job. The minimum benefit is $100 weekly.

The benefit follows you even if you switch jobs. For nearly all employers in Washington state, as long as you have worked the number of hours required, you can take a leave no matter how long you have been in your new job. The state Employment Security Department tracks the hours employees work even when they move offices, so the benefit doesn't depend on how long you’ve been with your employer.

“We really wanted it to work for the jobs of today, where people don’t necessarily just work at one job,” said state Rep. June Robinson, D-Everett, a key negotiator on the paid family leave law. “You might work a couple of part-time jobs, or people don’t stay at jobs as long as they used to. So we really made sure it was going to be a usable benefit for people.”

Very small businesses don’t have to pay the payroll tax — yet, their employees still qualify for the benefits.

The same cannot be said of employees who work for the federal government, however. Federal employees are among the few people who aren’t eligible to participate in the state’s paid family and medical leave program.

That’s a little disappointing to April Schachtel, a doctor who works at VA Puget Sound. She isn’t eligible for the state’s paid family leave benefits, and doesn’t have the benefit through her employer, she said.

As a doctor in a two-income household, she said she could potentially afford to take some unpaid time off if she decides to have another baby. Still, Schachtel said, she would have to save up paid sick days and vacation days in preparation for the event, in addition to potentially taking some unpaid leave. Those various pressures could cause her to take less time off than the 12 weeks the state’s paid family leave benefits would provide, she said.

With her first child, Schachtel was able to scrounge together about 10 weeks of vacation days and sick days, she said. However, “I certainly would have liked to take longer if I could have,” she said.

Other workers not in the program are those employed by a federally recognized tribe, or those subject to a union contract that dates to Oct. 19, 2017 or before.

Self-employed people aren’t automatically enrolled in the program, but can opt in.

For parents, the time off allows them to bond with their children and makes it easier to breastfeed, both of which are associated with better outcomes for kids. Children’s well-being also increases when their mothers are less stressed during pregnancy, another area where research suggests paid family leave can help.

In the more obvious category, paid time off also provides more money for parents to spend on expensive child- rearing needs, such as day care.

Not to mention that women need time to actually heal from giving birth. Tina Walha, the director of innovation and performance with the city of Seattle, said with both of her children, it took her “a solid six to eight weeks” for her to recover from delivering a baby.

Walha was able to take paid parental leave following each of her pregnancies — not just with her 4-year-old daughter, Sangeeta, but also with her 4-month-old son, Vikram.

“I wouldn’t have been as productive or as valuable to the folks I work with if I had to go back earlier,” Walha said this week.

Paid family leave can also be good for businesses, researchers have found. Studies have shown that first-time mothers are more likely to return to work when they can use paid maternity leave, thereby saving companies the additional resources they would spend recruiting and training new employees.

For events that can be planned for, such as a birth or some surgeries, you are instructed to give your employer 30 days notice before taking paid family or medical leave.

People looking to claim paid family leave benefits also will  have to formally apply through the state Employment Security Department. While some aspects of the state’s program are still being worked out, including the application interface, more information can be found at paidleave.wa.gov/workers.

The site will be updated with more information in the coming months, closer to when the paid leave benefits become available in January.