The creator of the cult comic Megg & Mogg talks rabbits, mental health and branching out to TV. 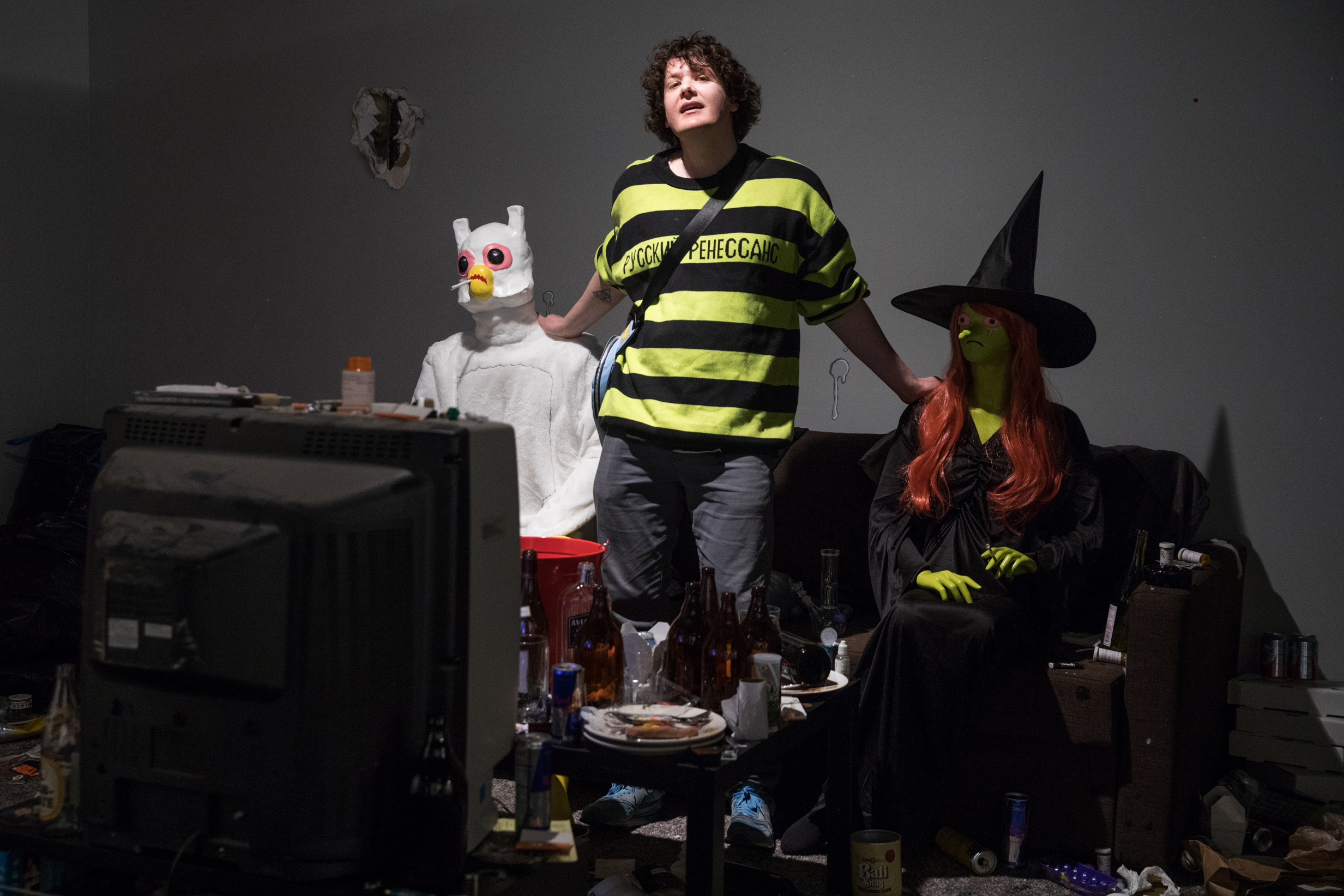 Artist Simon Hanselmann stands within one of the scenes he created for his Bad Gateway exhibition at Bellevue Arts Museum, May 1, 2019. The show runs  through Aug. 11. (Photo by Matt M. McKnight/Crosscut)

A bedroom is littered with half-eaten food, urine-filled Coke bottles and empty liquor jugs. It’s grotesquely messy. And in the center of it all, a sad looking, green-skinned redhead lies on a mattress on the floor, with a pointy witch hat beside her.

Welcome to the darkly funny and crude world of Megg, Mogg and Owl, the beloved comic book characters created by Tasmanian-born, Seattle-based Simon Hanselmann. The internationally acclaimed comic book writer and graphic novelist is currently having a moment: His sixth collection, Bad Gateway, is due out from Seattle-based comics publisher Fantagraphics in July, and he just signed a TV production deal based on his most infamous works.

Hanselmann is also in the spotlight at Bellevue Arts Museum, where his new show (also called Bad Gateway, on view through Aug. 11) includes life-sized sculptures of Megg, Mogg and Owl, the witch, cat and bird that circle each other in dysfunctional friendship. Other characters from the series are also in attendance, including Werewolf Jones and Booger the trans monster, plus staged scenes from the comics (such as the disastrous bedroom described above) and 176 original hand-drawn and watercolor pages of his new book.

“The books touch me deeply; they deserve to be better known,” said Benedict Heywood, long-time fan and BAM executive director and chief curator, on his decision to feature this exhibit.

“It’s your chance to walk into these characters' world and feel the empathy they demand.… It’s the beginning of a conversation of addiction and depression that are important conversations,” Heywood said, adding, “it’s also laugh-out-loud hilarious, and that’s another plus.” 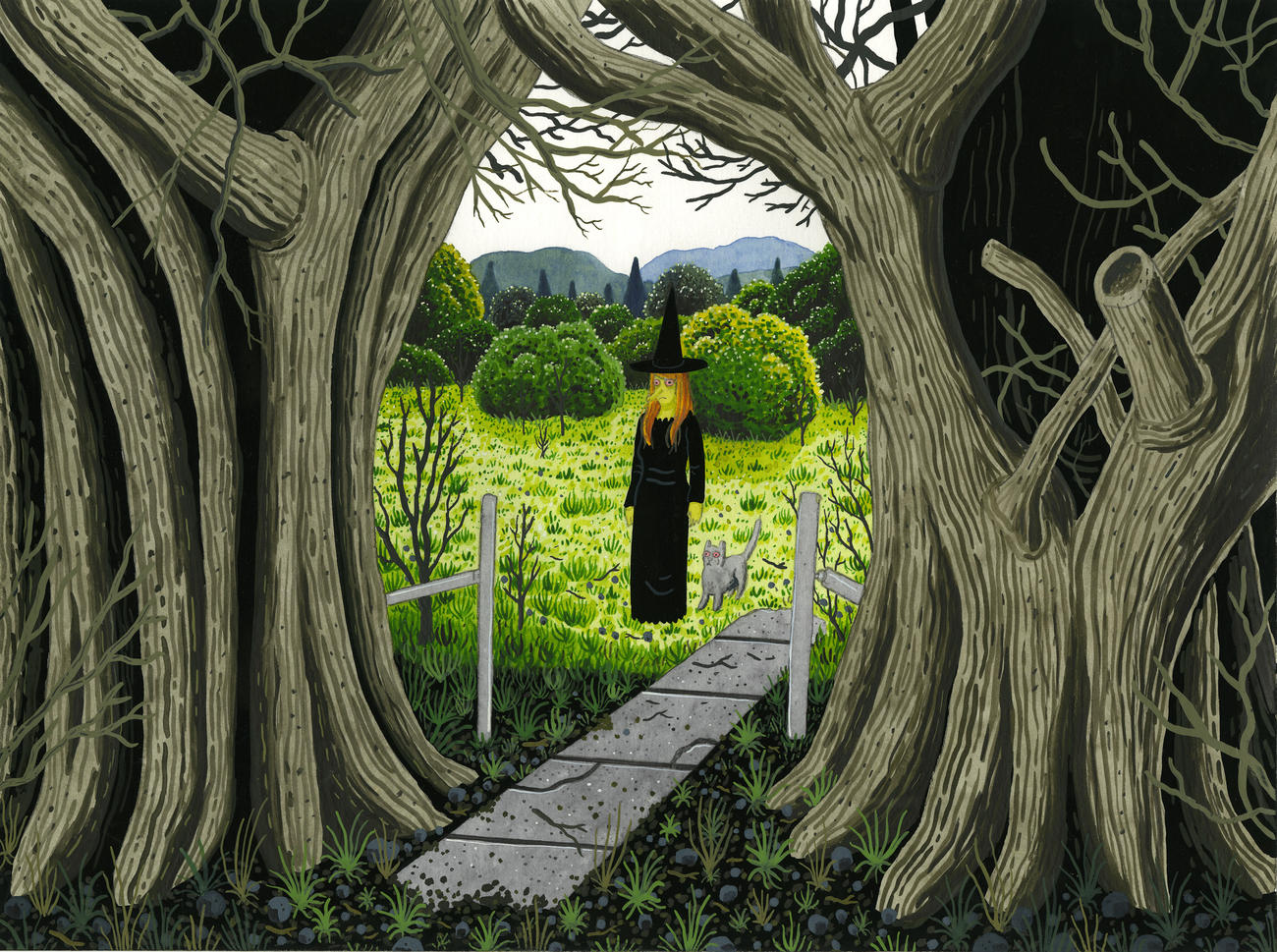 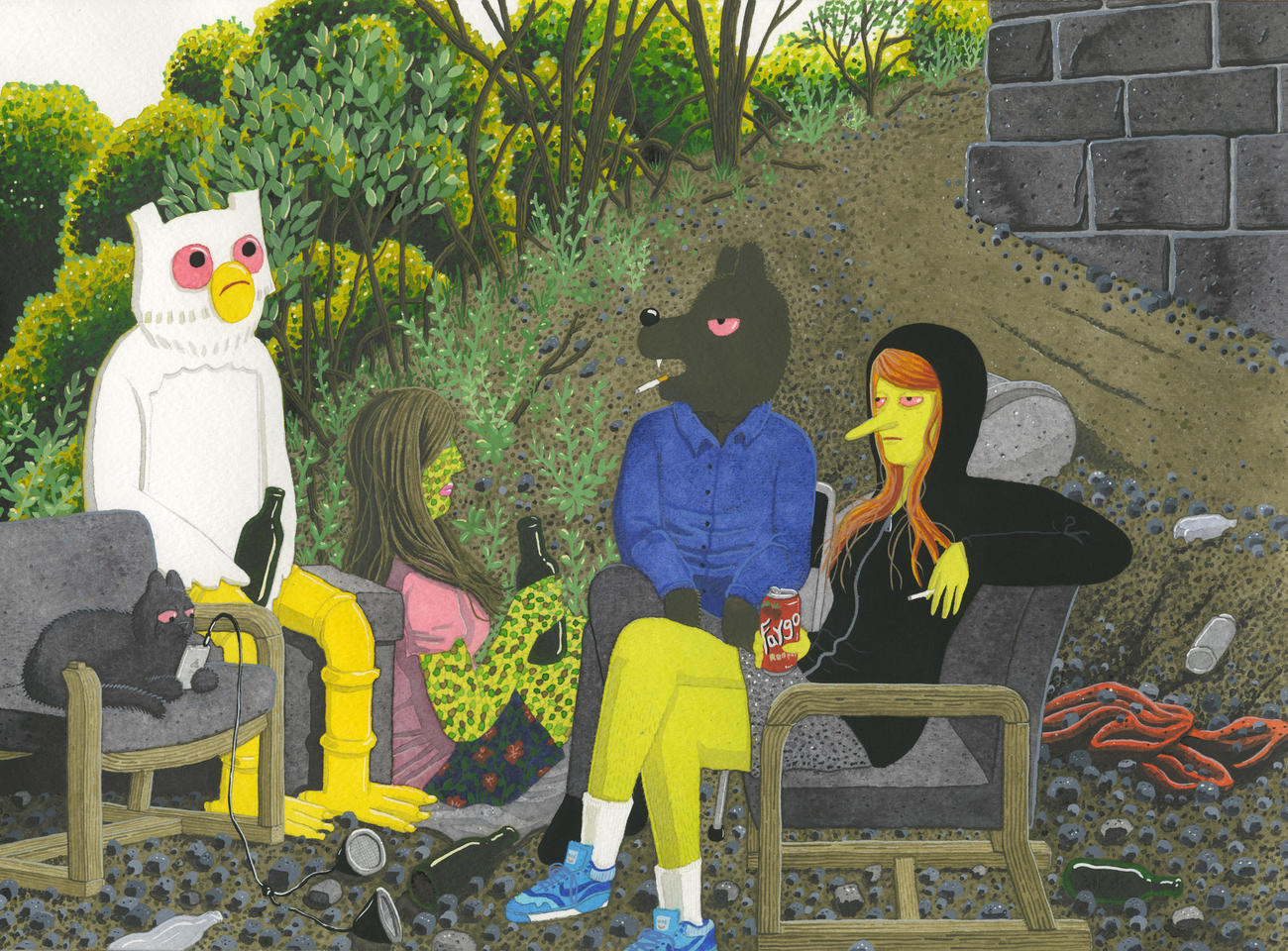 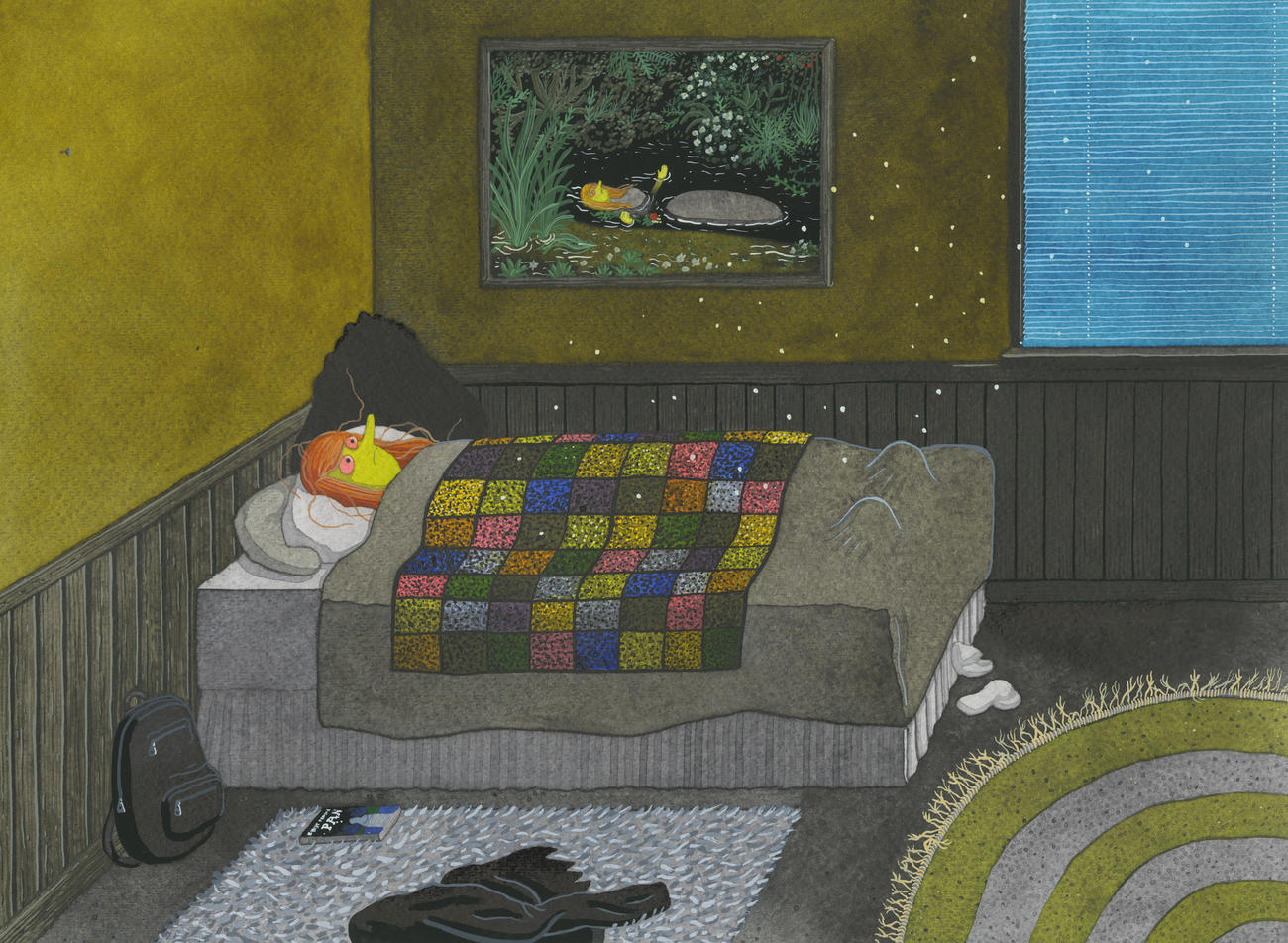 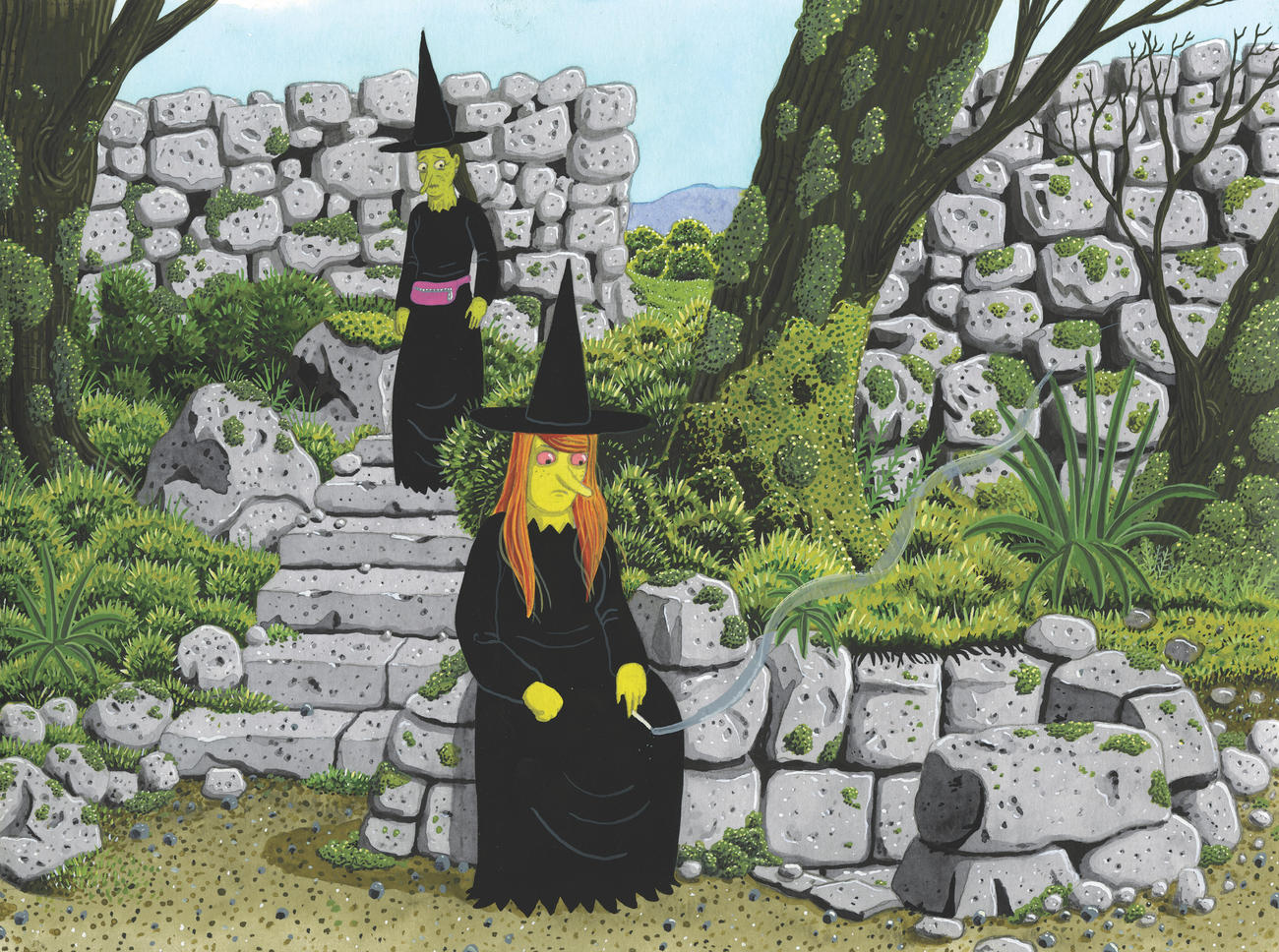 Originally from Australia, Hanselmann moved to Seattle in 2016. He began the Megg, Mogg, & Owl series in 2009 as self-published mini-comic strips known as zines  —  which also can be seen at BAM. When Hanselmann published them on Tumblr, they went viral; he now has 40,000 followers on his blog, Girl Mountain. In 2013, Hanselmann briefly published the comic on Vice. And two of Hanselmann's books became New York Times bestsellers in 2014 and 2016.

Heywood said he was excited to host the museum show because the fine-art world doesn’t always appreciate comics. “I felt like there was a gap in the exhibition market,” he said. “We have access to some really creative people, but we’re not showing them in our galleries.”

“Let the grilling commence,” he joked as he got comfortable in his living room, where one wall is covered in comic books.

I spoke with Hanselmann about the BAM show, the nuance in Megg, Mogg & Owl and branching out to TV. 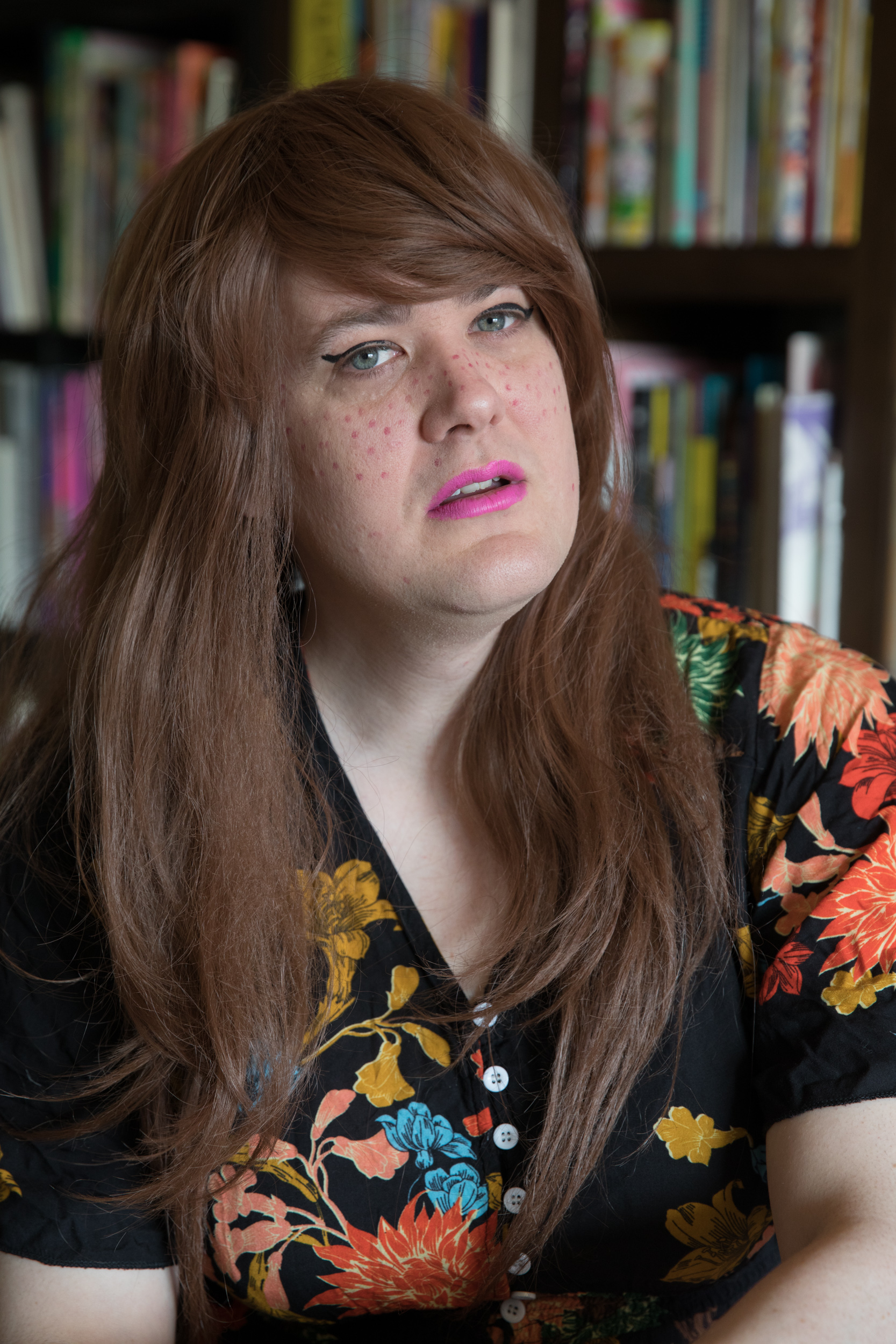 How's your day been?

I got up, checked my emails, medicated some rabbits.

That's right, I heard you had rabbits.

Yeah, my wife co-founded a rabbit shelter. We have eight personal rabbits that we've ended up with. It's like “Sigh, I can't let you go.” [I] just fall in love with them.

So tell me about your exhibit. I saw it yesterday.

How have people reacted?

I overheard a few people, a couple of businessmen, [I was] sort of spying. He was like "Oh, I could never put this on my Instagram" and a lady he was with was like “Oh, I could. I love aliens."

There's no aliens in the show; there's a witch and and an owl, but I'll take that. That's at least a compliment.

How do you explain your art to those who regard comics as something for children?

I think they need to see the craft element in it. I don't think anyone can deny the craft in the comics. There's 170 pages on the wall that have all been meticulously hand-drawn and painted in an obsessive way. I spent 3,764 hours producing this work.

I had this [experience] trying to convey what it was when I did a [recent] tour. Some of them did find it a bit repulsive. It ties in to the opioid crisis, it ties into housing crisis, homeless crisis. It's just about how people live. I think they did gain some perspective on what it's like for people.

Why are comics important?

There's a crisis of mental health right now. Suicide rates are up and depression is running rampant. It's in the public conscience. Of course, cartoons are going to tackle that. They may appear juvenile in their clothing, but they’re trying to tackle real things.

I'm actually doing a strip right now for the American Library Association for Booklist. It's basically just saying comics are like any other art form. Like poetry, music, film, think about the breadth of that. There's everything, it's not exclusionary, it’s not all superheroes and manga.

You blew up pretty quickly. What do you think it is about Megg & Mogg that resonated?

I think it's the honesty of the depression and anxiety. The squalor really. A lot of people are doing it tough and doing it quite hard and they see themselves in these characters struggling with their addiction and mental illness. It’s huge in Russia. I see Russia as kind of a scary squalor place that's quite regressive politically.

People see the horrible side in the characters as well. I try and write these honest kind of comics about these reprobates who are tragic figures. They are cruel to each other, they are horrible. Just trying to show the human condition, warts and all.

How do the characters mirror yourself?

Well there's a lot of autobiographical content in there. I say that … but not really because that makes me look like a monster. Growing up with a drug-addicted mother who was a drug dealer for a long time and seeing the different type of people coming through, trapped in the cycle of addiction.

I compartmentalize and break down different aspects of my personality. Some of it is embarrassing to admit to because it's like, damn, stuff from 25 years ago, but you modernize it and put it into a context with these older characters, which can make them look very immature.

I did a somewhat similar show in 2007 in Tasmania. This is kind of the Megg & Mogg version of that, but with a museum backing it.

I pitched it to [BAM] as a shitty Disney World. It's like a roadside attraction as well. It reminds me of a place I used to go to when I was a kid called Teddy Bear's Picnic. It was for kids and it had all these janky kind of papier-mache bears and Goldilocks and they were kind of a bit off and terrifying and as a child I found that quite magical. That's what I'm going for. I'm shocked [BAM] let me do it.

Why should comics be in galleries?

You go to Italy to one of the big comics festival and their like, “Oh my god, Fantagraphics!” Pete Bagge, back in the grunge days, did a comic called Hate. If you liked grunge, you liked those comics. Pre-internet people were so hungry for analog content. Comics were everywhere, but now less so. You don't find them at the drugstore or record stores.

Who’ve been some of your biggest inspirations?

Pete Bagge was huge for me. I started reading him when I was 13. I was pretty young for [Hate, 1990], but it taught me a lot about relationships and social circles. Charles Burns [Black Hole, 1995]. He's a master illustrator. Amazing history.

You dropped out of school because they didn't let you make comics?

I didn't go to school much anyways. My mother would drop me off, and I would kind of just leave. I got mercilessly bullied. I dropped out year 10. I just got sick of it. I went back to college, but dropped out again because my friend dropped out. We were cartoonists on the college newspaper. He ended up being a head animator on Dreamworks, so we actually escaped this horrible small town and without school. We did it on our own, which I really like.

Your comics have been printed in 13 different languages. What do you make of all that?

It's crazy. I try not to think about it because nothing's really changed in that I'm still just sitting at a $10 Ikea coffee table drawing these comics and just immersing myself in this fantasy world. It was  [mind blowing] for someone who grew up pretty poor and pretty sheltered and suddenly 300 people turning up to a signing in Madrid and signing for six hours and connecting with people.

There seems to be a popularity right now surrounding animations combined with dark themes, like Bojack Horseman (a Netflix animated series about a depressed alcoholic horse), for example.

Oh, Bojack's been ripping off me for years.

Well not ripping off, but similar themes.I feel like Bojack and similar shows have been exploring similar avenues to me for years now. Is what I'm doing old hat?

Can you say more about the TV deal?

I can't say who they are; they're so cagey about this stuff. I think it's OK for me to generally say that I signed a shopping agreement. I really trust this production company. They got Megg & Mogg. They saw it for all its intricacies and warts and empathy. 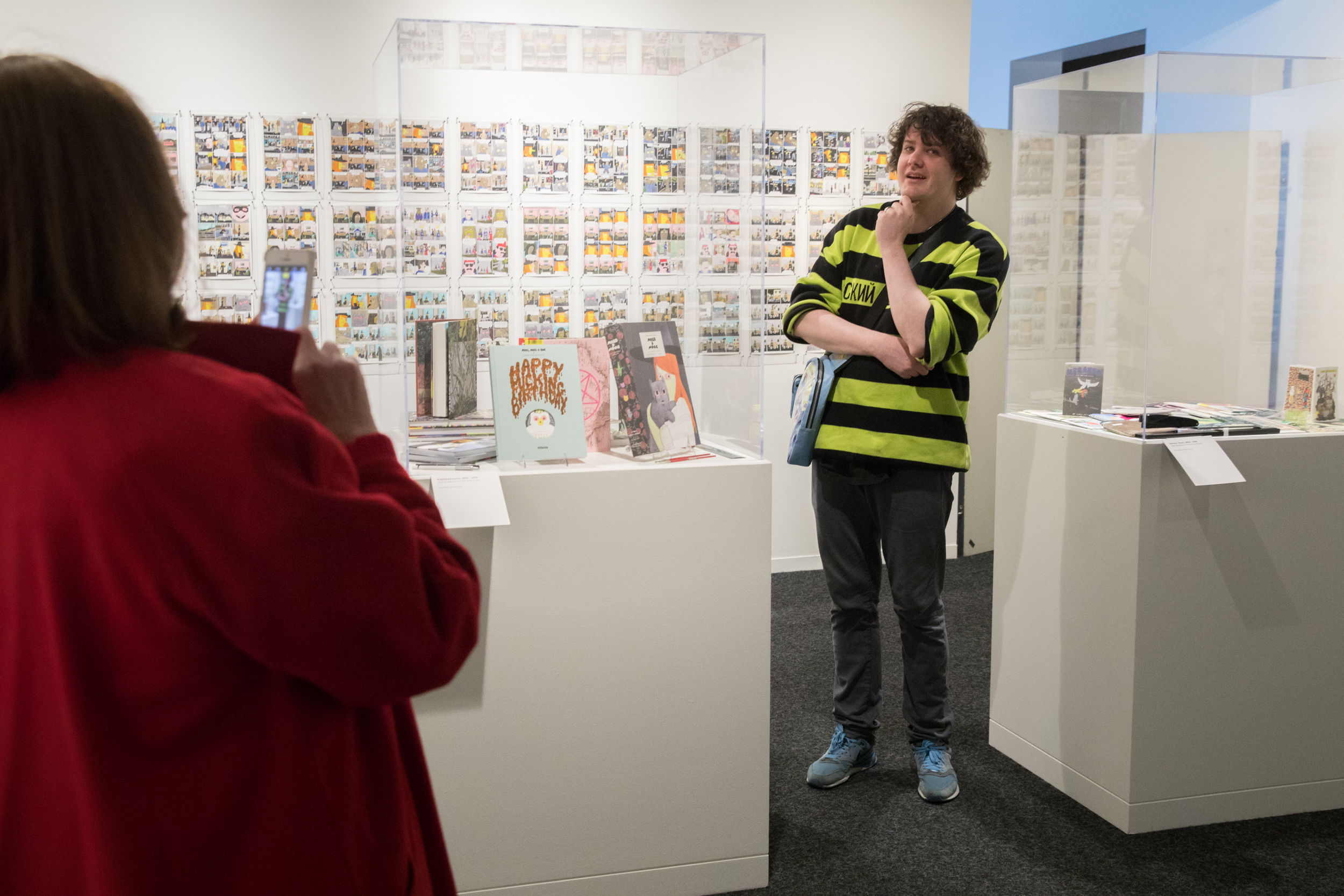 Simon Hanselmann poses for a visitor while putting some final touches on his exhibition Bad Gateway at Bellevue Arts Museum. (Photo by Matt M. McKnight/Crosscut)

Simon Hanselmann poses for a visitor while putting some final touches on his exhibition Bad Gateway at Bellevue Arts Museum. (Photo by Matt M. McKnight/Crosscut)