What does WA do with broken down wind turbines? 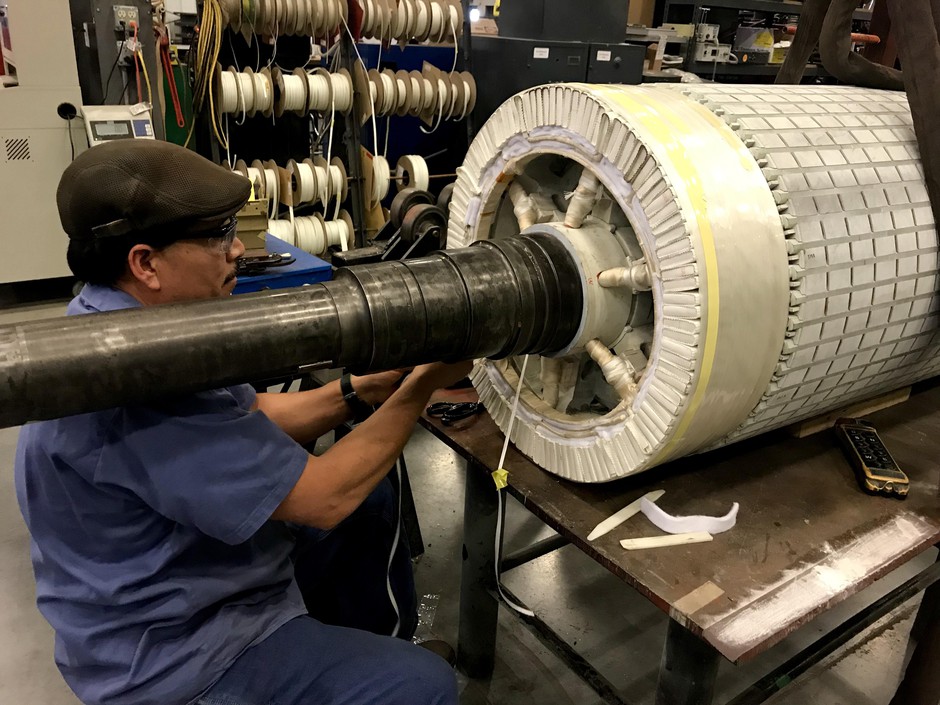 In H&N Electric's shop, Jose Gutierrez finishes up one of the last steps of repairing a part of a wind turbine generator. (Photo by Courtney Flatt/NWPB)

Taylor Hays grew up watching her father fix wind turbines. She didn’t consider herself to be very mechanical. But she knew she wanted to work with her hands.

So she decided to follow in her father’s footsteps. Hays is studying at Walla Walla Community College in southeast Washington to repair renewable energy equipment, like wind turbines.

“This is my first wind application class, so I’m kind of excited because we haven’t been able to work with actual wind turbine equipment yet,” Hays said, standing in a large room filled with mechanical equipment.

As a potential second-generation wind technician, Hays said she’s ready to be part of an industry that’s helping develop technology that will reduce fossil fuel dependence.

“It makes me wonder, ‘Will I be a big part of this whole change? Will I help develop new technologies and all of that?’ It’s exciting to think about,” she said.

The four students in this class huddle around a computer. Hays reads instructions from a large workbook. Various parts of a wind turbine hang from the wall in front of them.

They punch commands into the computer, and the equipment whirs to life, rotating this way and that.

“In this case, we’re making things go wrong on purpose so that we can practice fixing them,” Hays said.

Down the road in Pasco, Washington, H&N Electric is in the business of fixing things that go wrong inside the turbines.

Inside the company’s shop, machinist Mike Byrd has a broken piece of equipment suspended on a hook. It’s an essential part of the wind turbine generator called a slip ring.

“These are one of the pieces of the generator that are designed that they wear out. And so we’ll exchange them out for a one that’s in good shape,” Byrd said.

Several of these heavy pieces of equipment sit next to his workstation. This particular piece he’s working on is damaged beyond repair.

“This one’s junk now. So I’ll put it in our recycling bin and it’ll get recycled,” he said.

“A lot of the manufacturers had to produce a huge volume of equipment to meet the demands of the market. And the wind market has grown very rapidly. So basically lot there is a lot of design issues,” Glessner said.

In the Northwest, some of the oldest wind farms were built in the early 2000s. When the turbines get too old, wind farm owners can either upgrade to newer technology or shut down the farms. Those processes are called repowering or decommissioning, respectively.

In Oregon, the oldest wind project under state jurisdiction is requesting to repower its turbines. The Stateline Wind Project began operating in Umatilla County in 2001. The repowering would increase the turbine height so that the farm can generate more energy.

The Energy Facility Siting Council is expected to make a decision on the repower request Friday, May 17.

In the U.S., old turbine blades usually end up in the landfill. Each weighs about 22,000 pounds; there are three blades per turbine.

A new way to recycle

“They’re difficult material to handle, and there is not a clearcut path to say, ‘This is really easy. We can recycle this,’” he said.

Englund is working with Global Fiberglass Solutions, which is based in Bothell, Washington. The company has built a blade recycling plant in West Texas. It should be up and running by 2020.

To recycle the blades, the plant breaks them down into quarter-inch pieces or smaller. Eventually, those chunks are turned into plastic pellets or panels similar to particleboard. Unlike wood, the fiberglass panels are water resistant.

“So that has some very unique attributes of being able to go where wood falls short. That goes into places where there’s high humidity water where fungi and deterioration and swelling occur with wood,” Englund said.

Eventually, the company hopes to recycle other fiberglass products – like boats and airplanes.

It also plans to expand across the globe. Right now, it's in talks to build a plant in the Midwest and, one day, in China and Europe.