Who wore it better: Seattle style vs high fashion

Gore-tex meets Gucci in new shows at MOHAI and MoPOP. 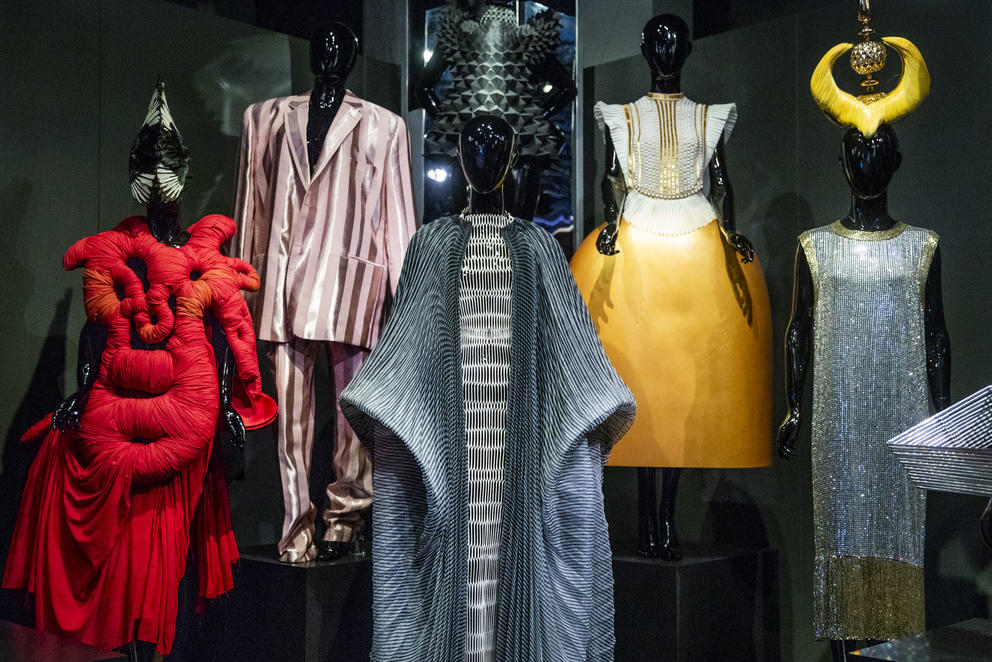 Part of the exhibit “A Queen Within: Adorned Archetypes” at the Museum of Pop Culture (MoPOP) in Seattle on May 15, 2019. (Photo by Dorothy Edwards/Crosscut)

Seattle has a reputation when it comes to fashion, and it’s not good. Common knowledge holds that “Seattle fashion” is a laughable oxymoron, a joke dressed up in a hooded rain jacket with vented armpits. For native Northwesterners, this is a point of pride. Casual is cool. Practical beats pretty.

But locals have always paid careful attention to clothes, ever since Coast Salish peoples wove garments and hats from cedar bark. While the goal might not have been a runway show, clothing makers have long been striving to address the specific climate challenges of our region (such as arriving at the office in dry pants). Conversely, high fashion is often deliberately impractical — a feast for the eyes, but a logistical nightmare for the body. So how might these distinct design approaches compare if pitted against each other?

Suddenly, we have the perfect test environment.

Two major fashion exhibits landed at Seattle cultural museums this month, mere blocks from each other. In one corner, wearing multiple layers and water-repellent shoes, we have Seattle Style: Fashion/Function. This is the hometown favorite, reveling in innovation spurred by climate, knowing far too much about wicking fabrics, appreciating the pliability of garments tailor-made for hiking and skiing, and slightly defensive about grunge fashion.

A Queen Within: Adorned Archetypes is on exhibit through Sept. 2 at the Museum of Pop Culture. ($26-$32)

In the other corner, wearing a spiky headpiece and heels that have no business in a bike lane, we have A Queen Within: Adorned Archetypes. This is the big-city interloper, a traveling exhibition curated by Sofia Hedman and Serge Martynov of MUSEEA, a Barcelona/London-based “multidisciplinary design and curatorial platform” that creates high concept haute couture shows featuring work from the likes of Alexander McQueen, Gucci, Vivienne Westwood and Comme des Garçons.

It sure seems like Seattle is about to have its fleece hat handed to it. But placed side by side, the two exhibits prove a well-matched pair — revealing Seattle to be a bit more au courant than legend has it — and offer more than a few moments of sartorial reverberation. 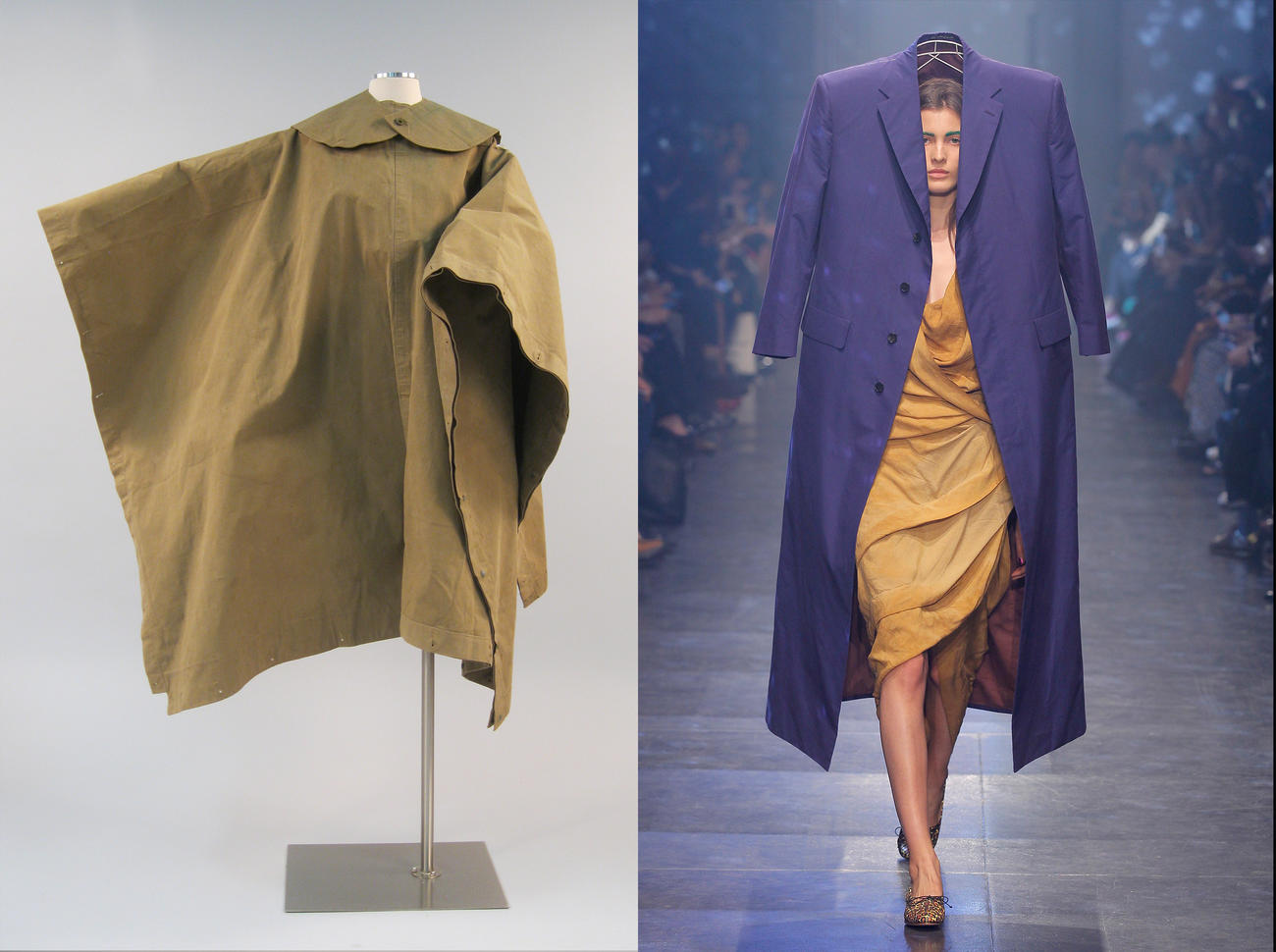 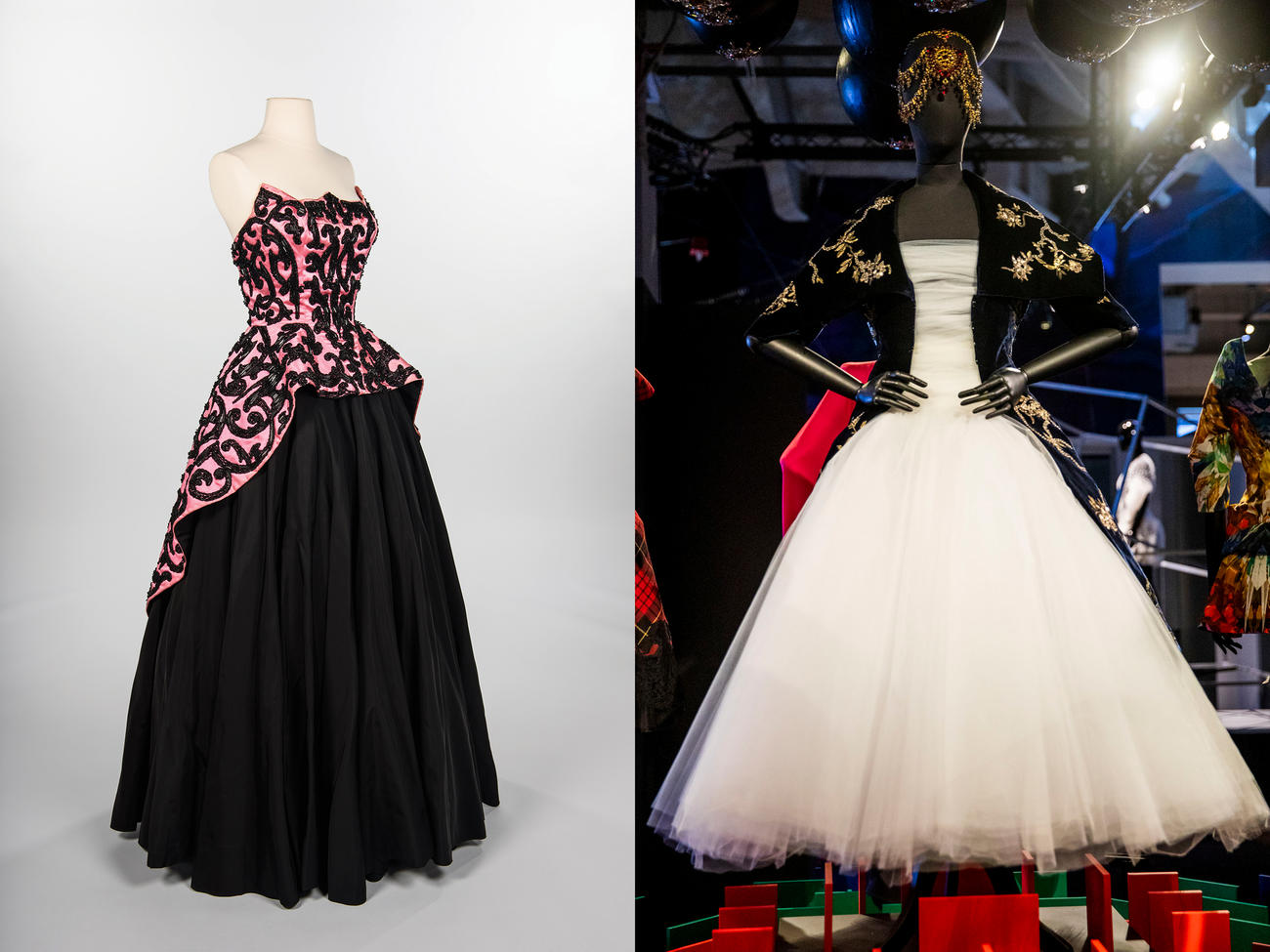 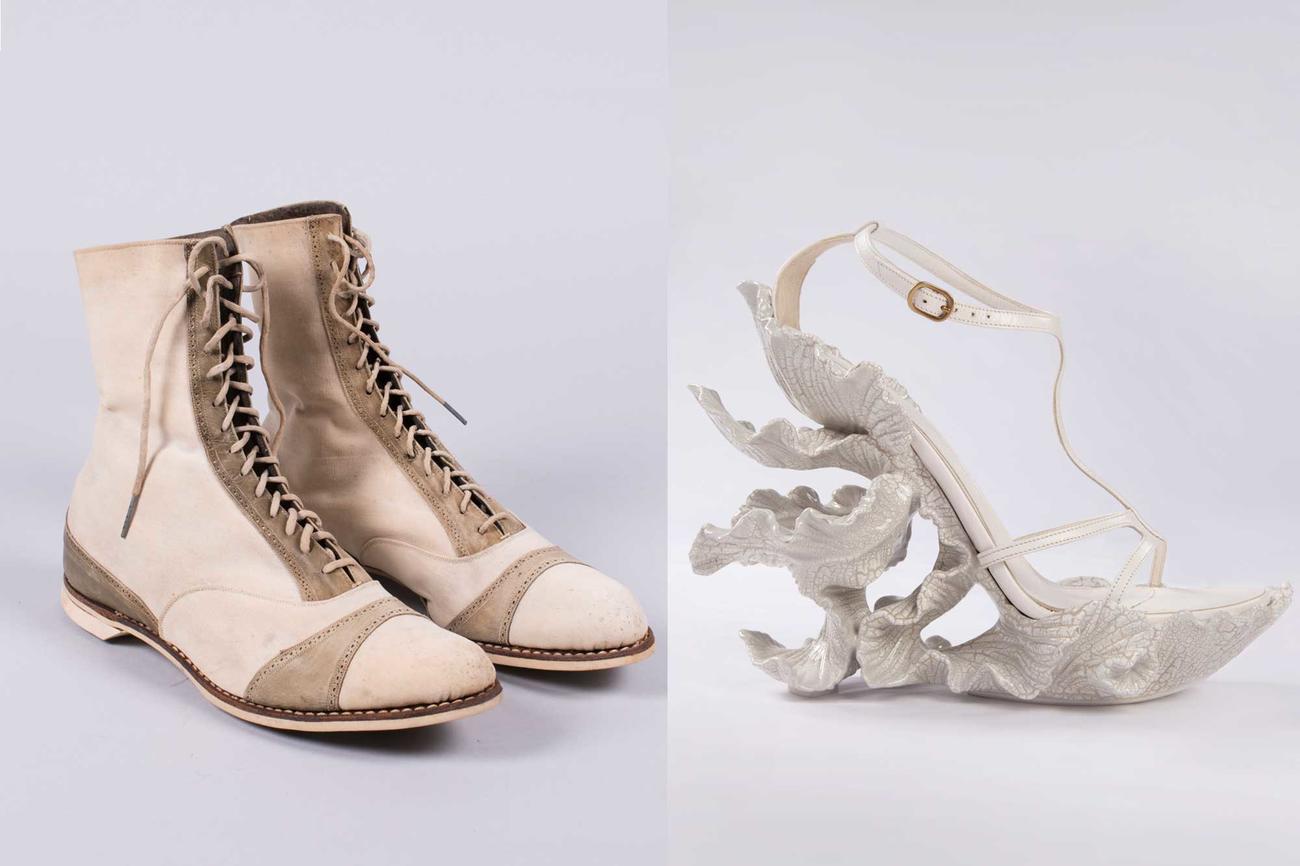 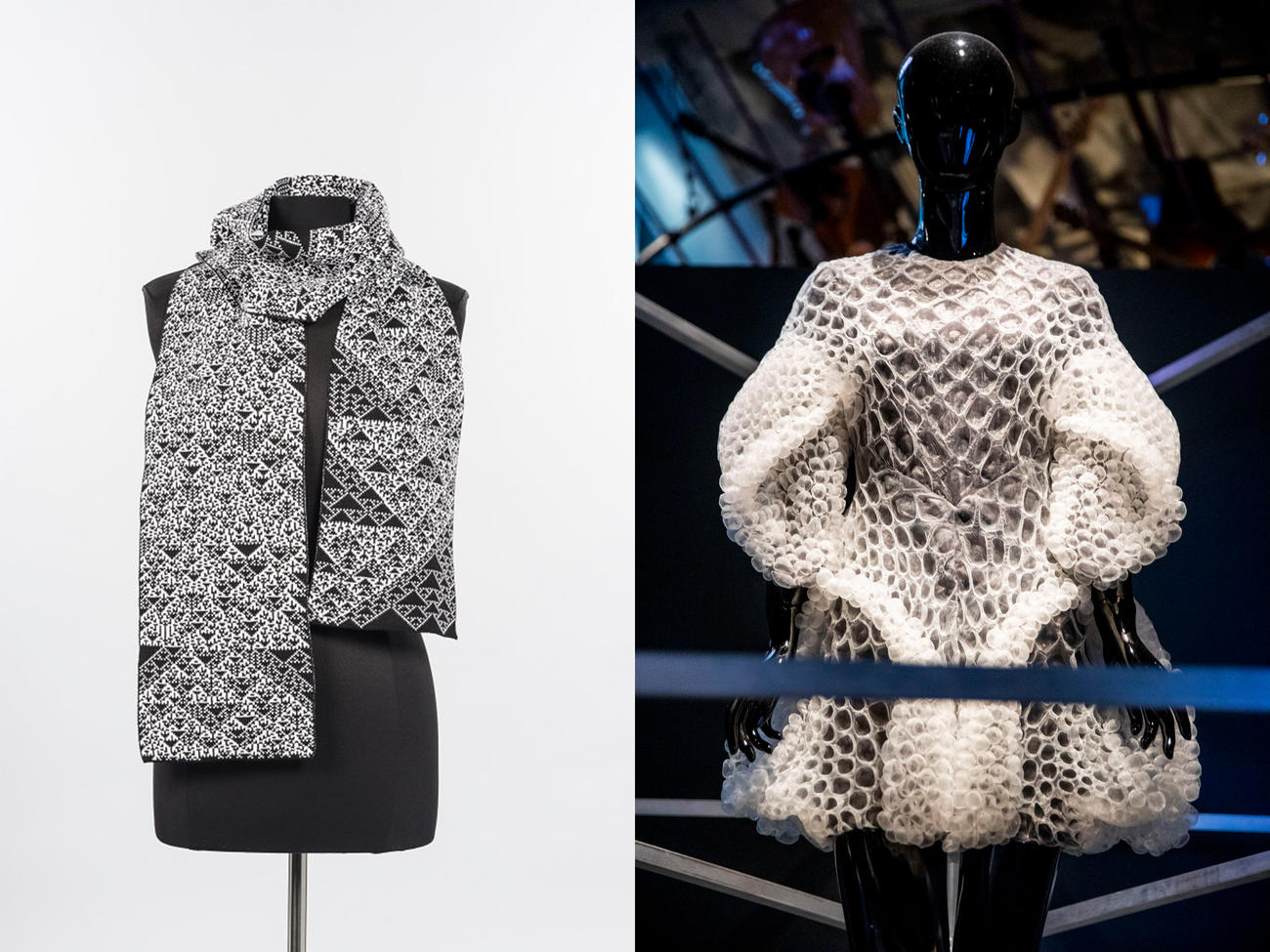 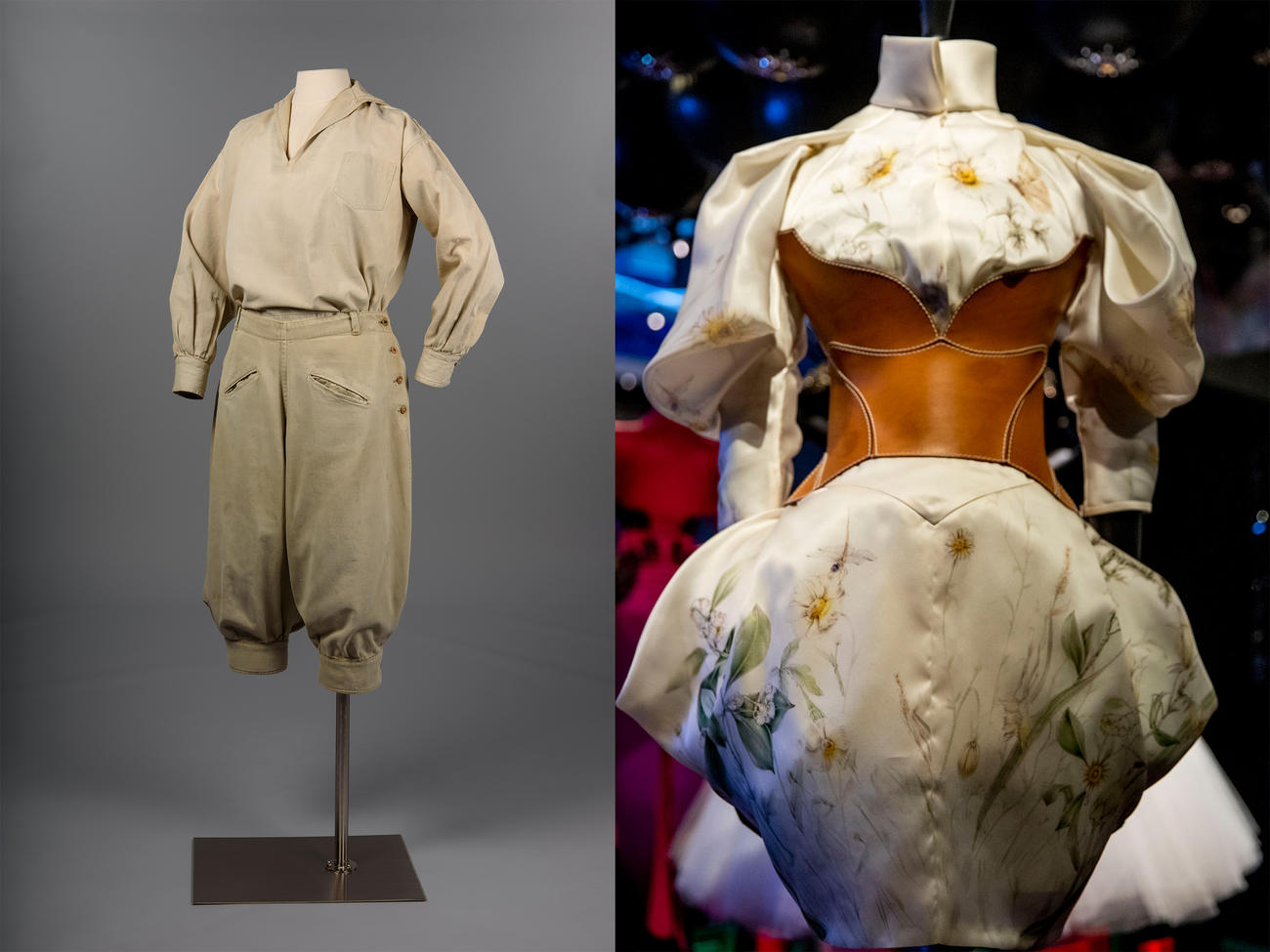 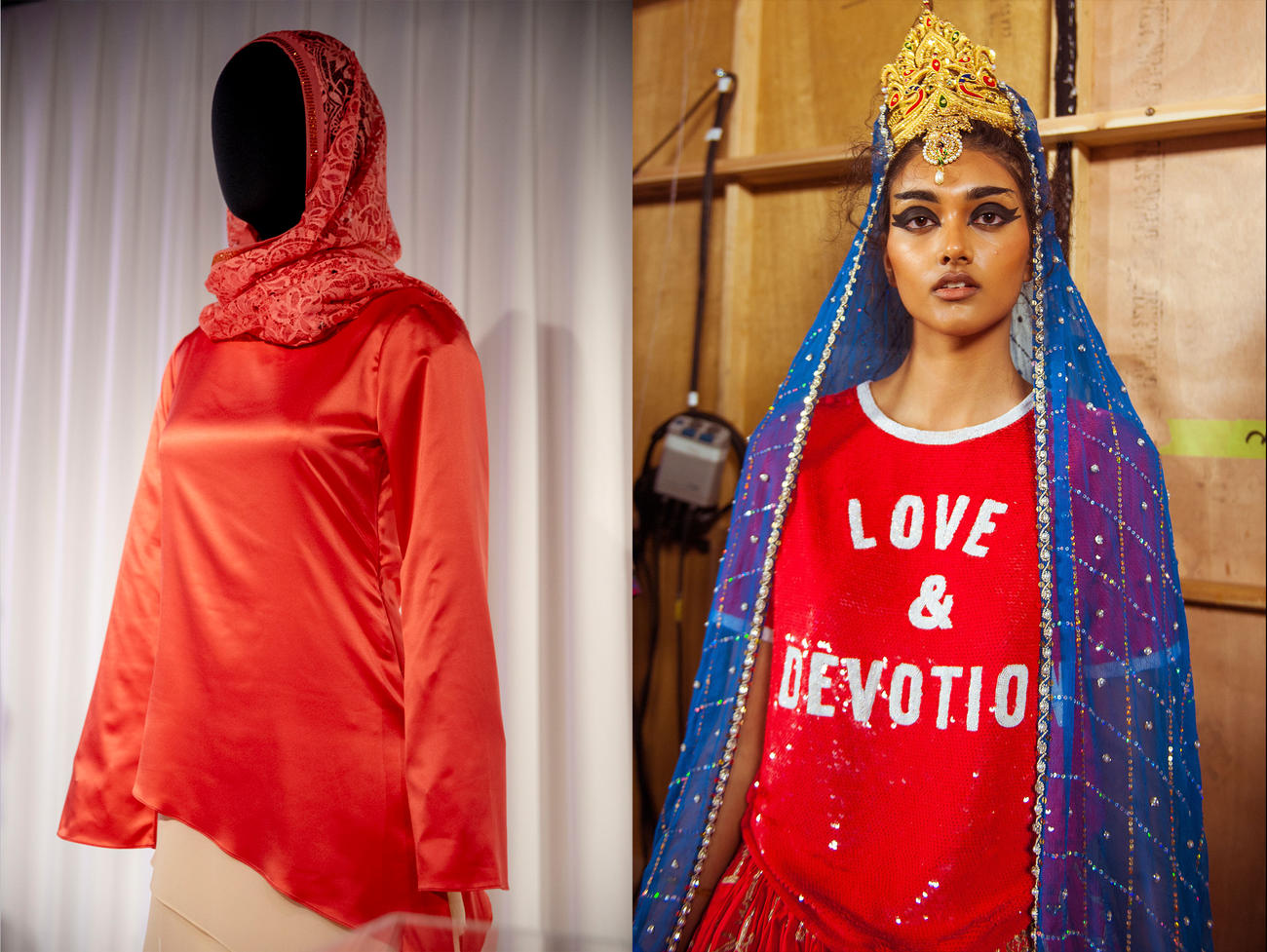 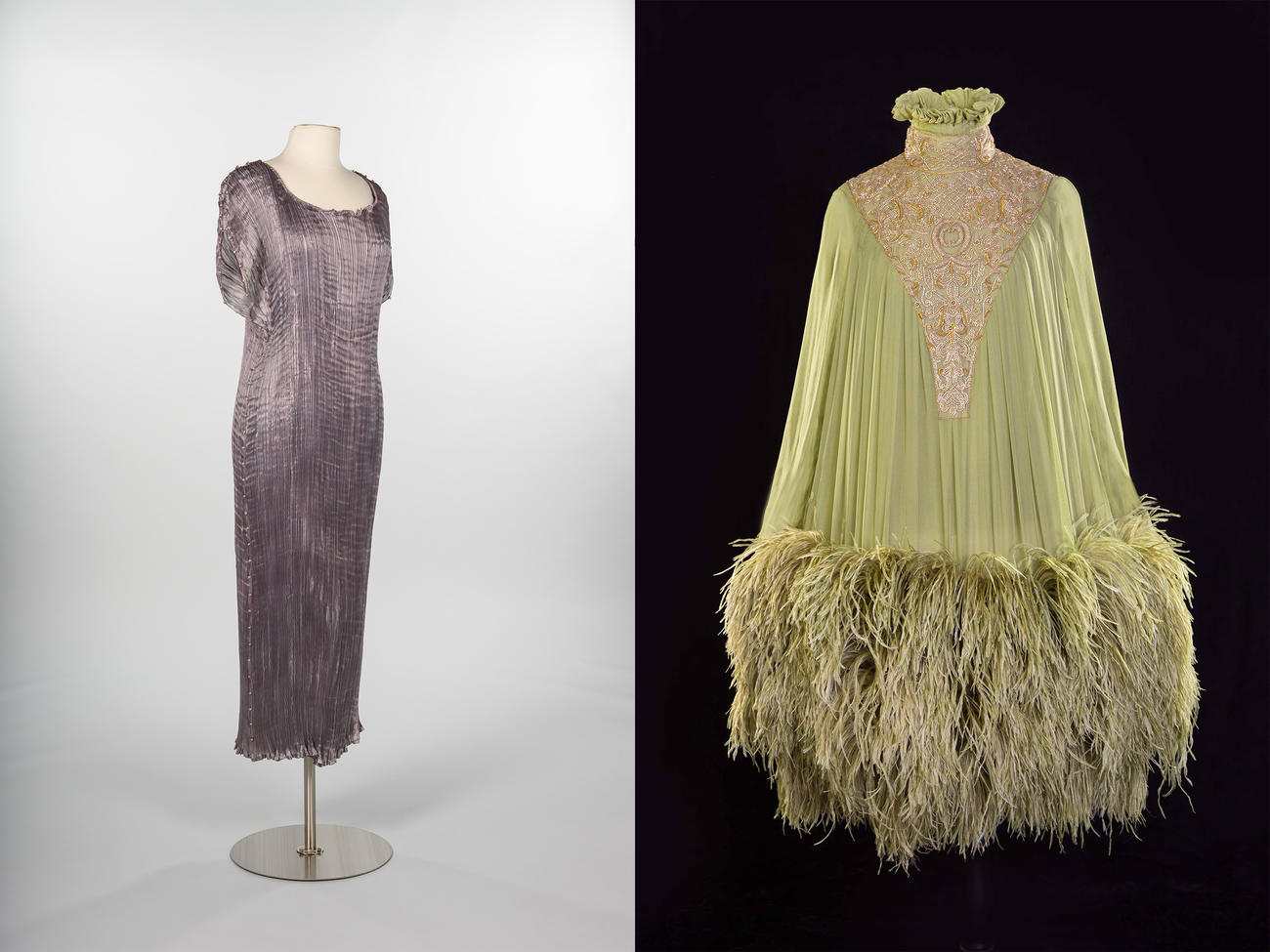 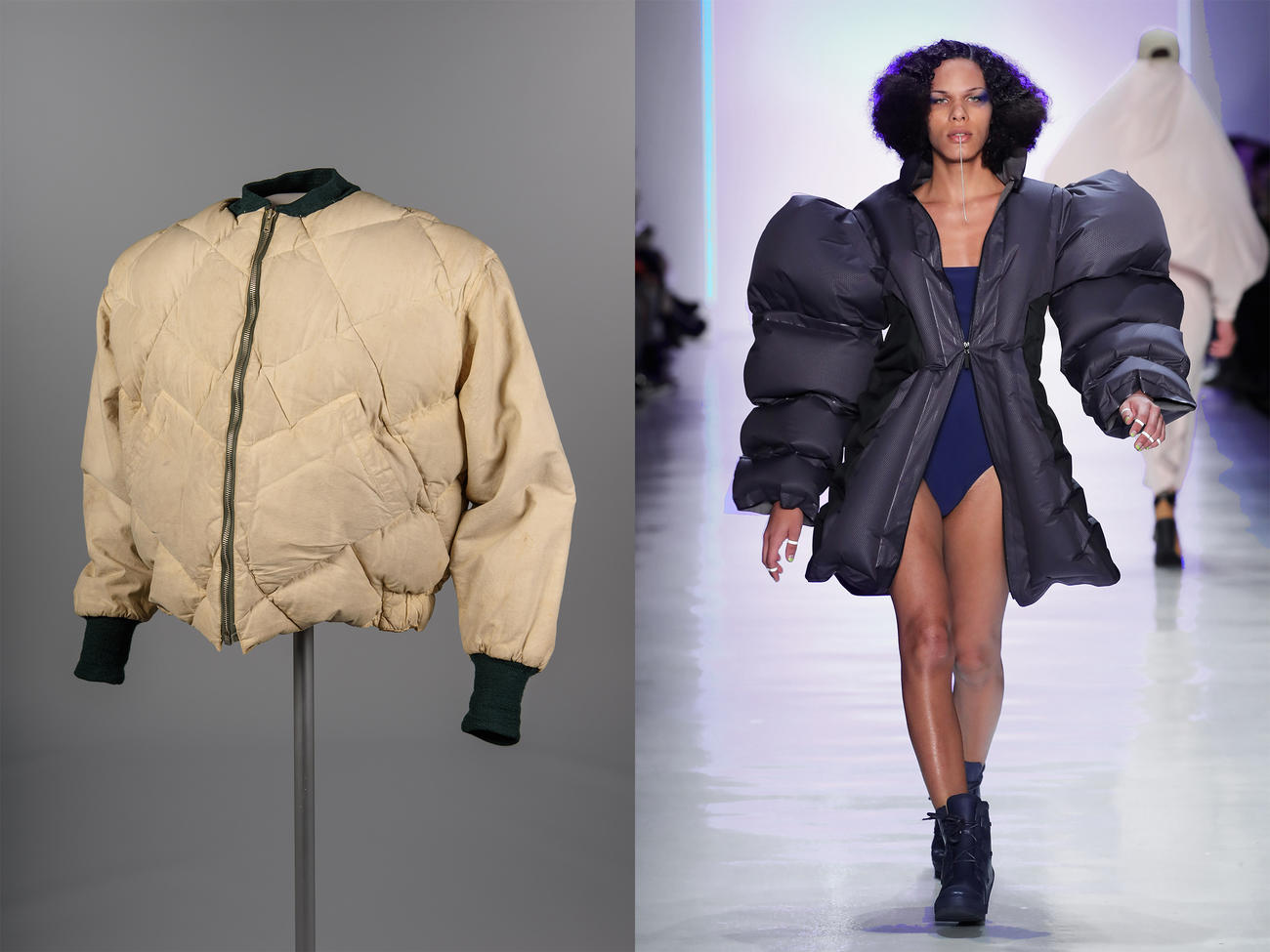 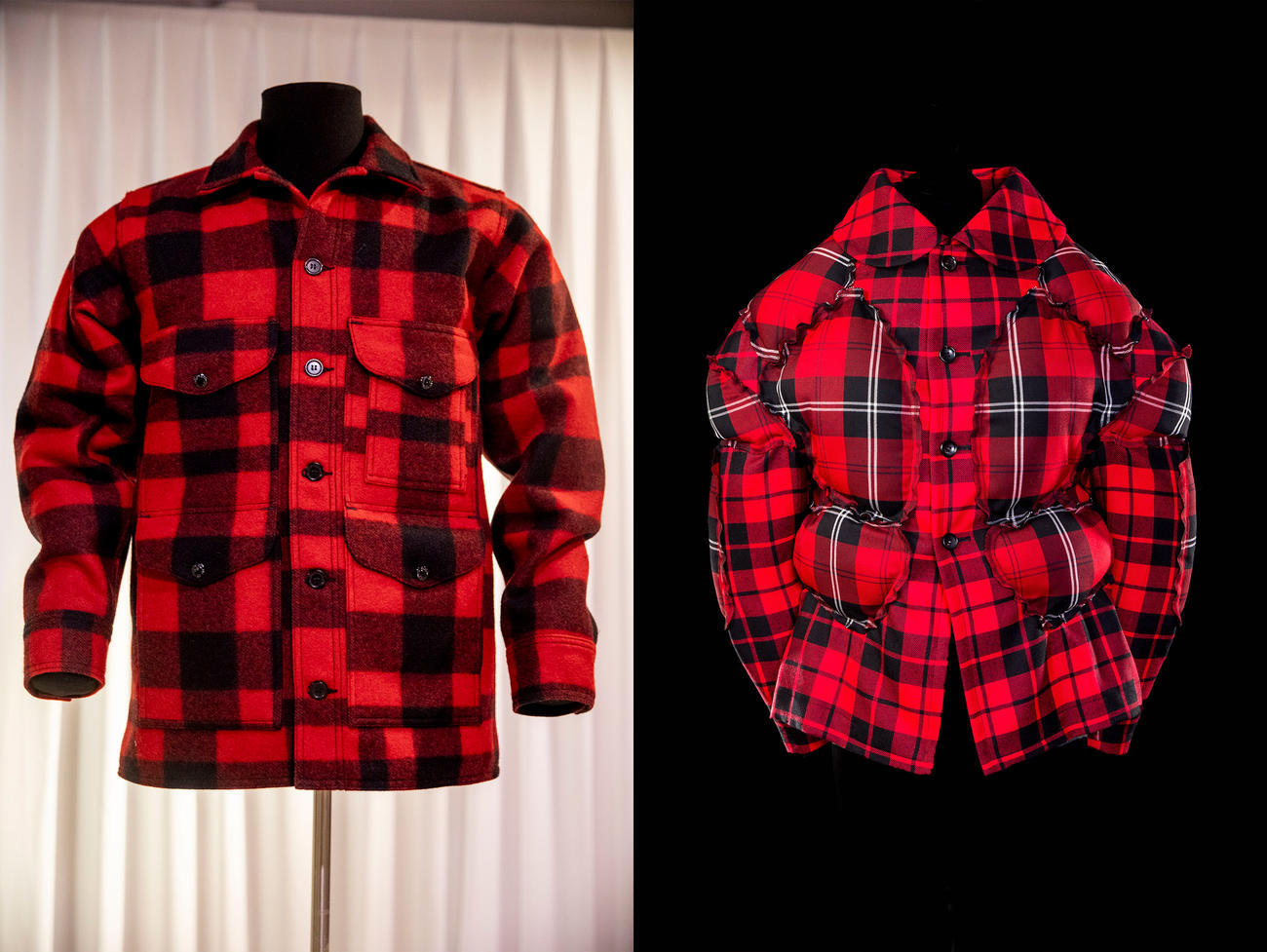 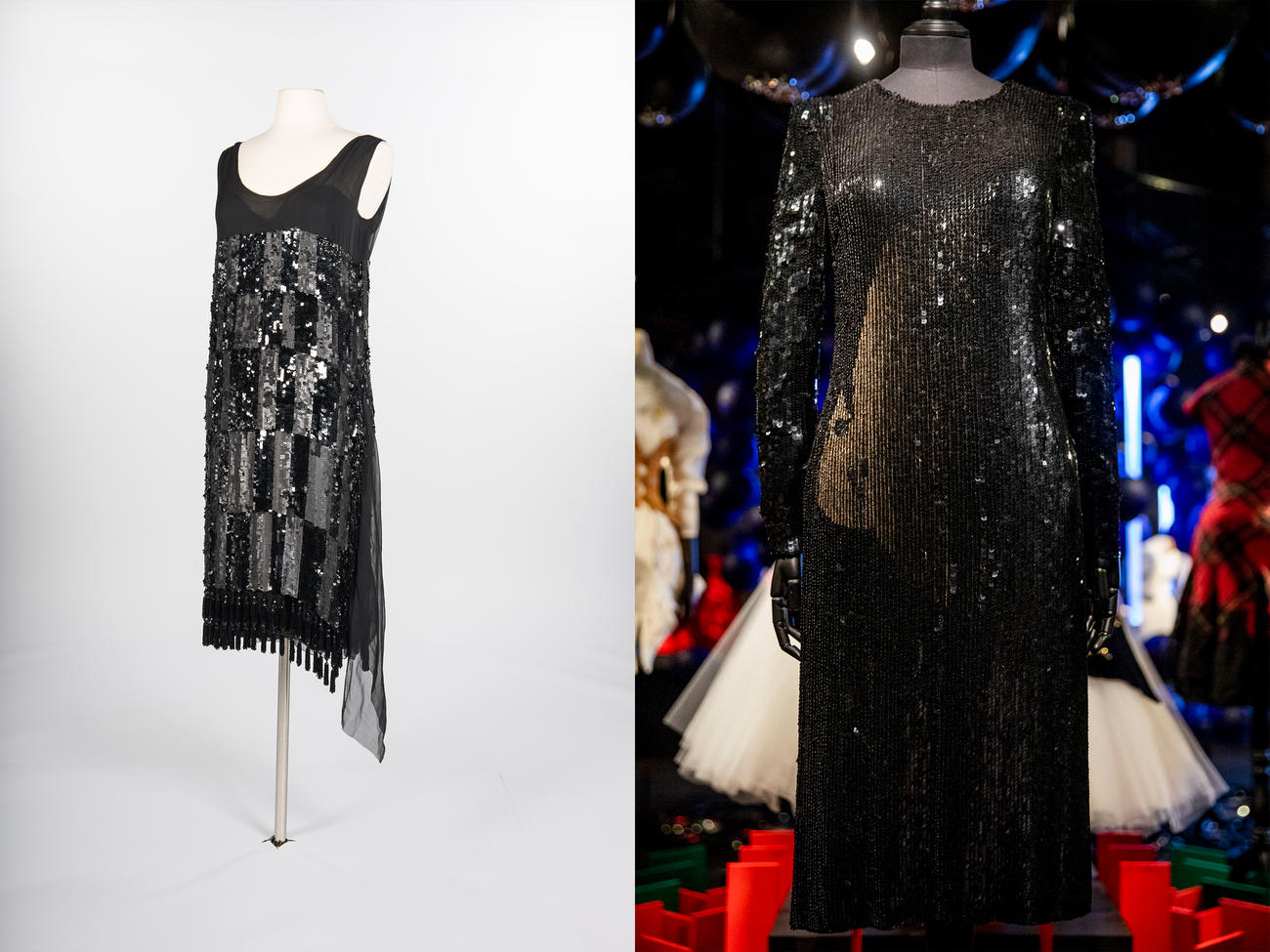 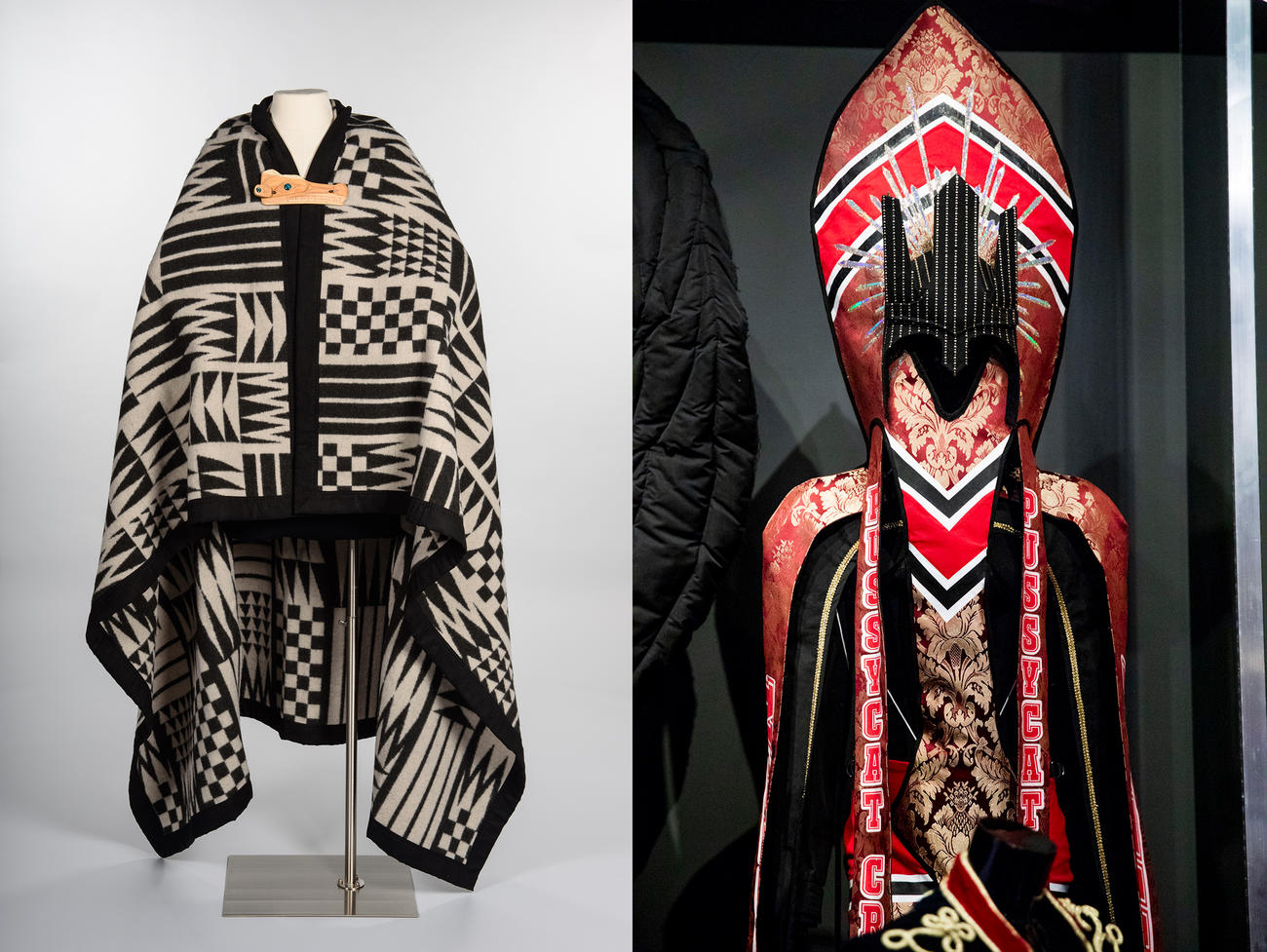 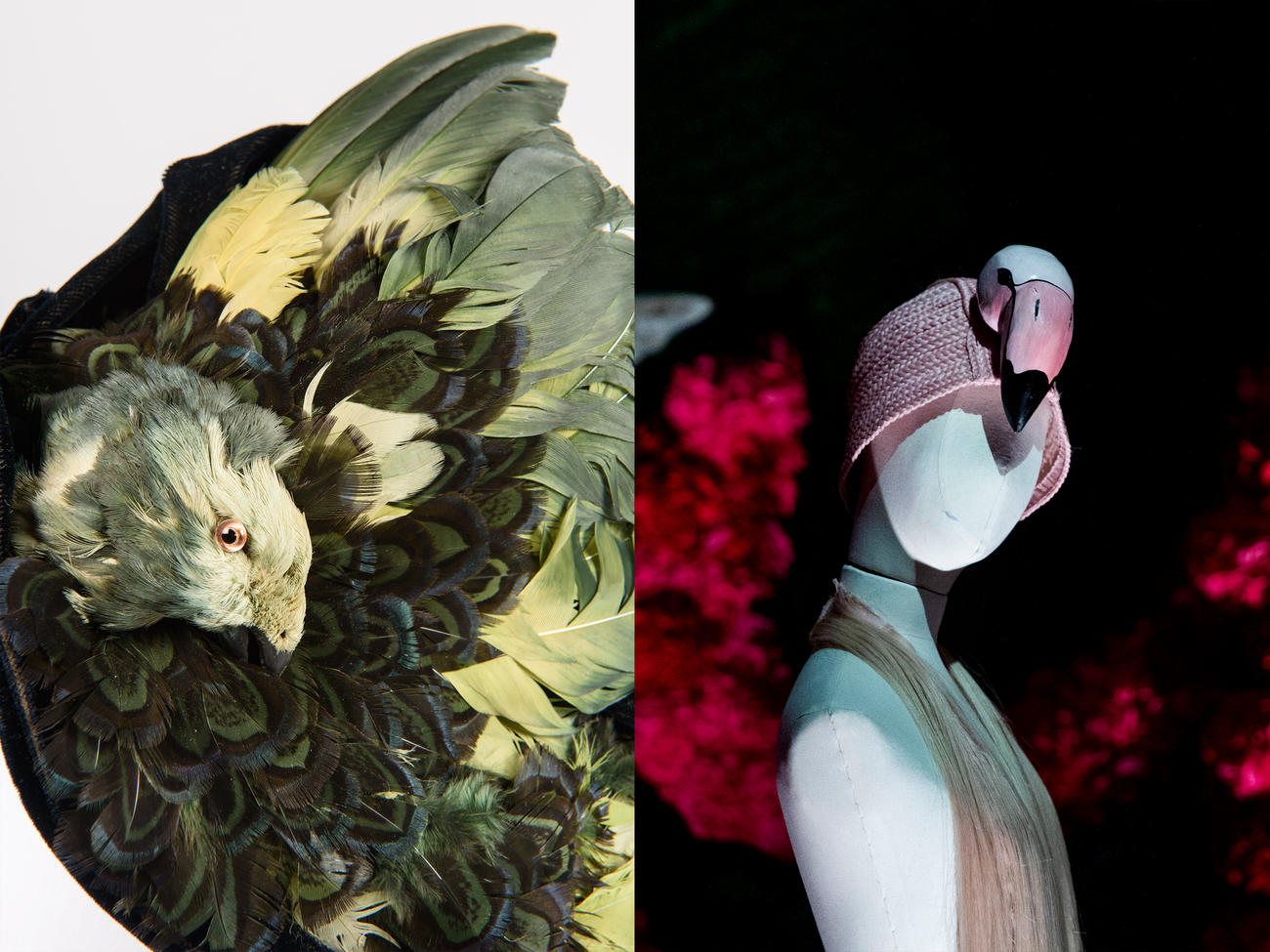 Left: Evening bonnets made from real birds (including heads) were all the rage in the late 19th century (and sparked the first federal wildlife protection law). This one (1888) was owned by Mrs. Edwin Bowden, who had it shipped from NYC by train to wear to a performance at Seattle’s Frye Opera House. (Photo courtesy of MOHAI Collection) Right: Flamingo hat by Charlie Le Mindu, 2011. (Photo at MoPOP by Dorothy Edwards/Crosscut)

Left: Evening bonnets made from real birds (including heads) were all the rage in the late 19th century (and sparked the first federal wildlife protection law). This one (1888) was owned by Mrs. Edwin Bowden, who had it shipped from NYC by train to wear to a performance at Seattle’s Frye Opera House. (Photo courtesy of MOHAI Collection) Right: Flamingo hat by Charlie Le Mindu, 2011. (Photo at MoPOP by Dorothy Edwards/Crosscut)

The MOHAI exhibit, curated by Clara Berg (the museum’s collections specialist for costumes and textiles), examines local trends from the mid-1800s through today. It’s arranged in loose groupings of garments that reflect the region: Nature and Place, Growth and Aspiration, Northwest Casual, and Innovators and Rule Breakers.

One of the earliest-dated pieces envelops all of these categories at once — within a vast expanse of heavy tan canvas. This circa 1910 poncho (see photo gallery above), defiantly drab and body-agnostic, upon close examination reveals several innovations. It appears to be nothing more than a canvas tarp folded in half, but the buttonholes running down all the edges allow for cinching any which way with rope or laces. Meant to double as an instant shelter, ground cover or bag, this nimble garment embraces the Northwest landscape with gusto (and a kicky Peter Pan collar). The owner of this one was a rule breaker herself: University of Washington grad Dr. Belle A. Stevens, a zoologist and hermit crab expert who wore it on research trips to the San Juan Islands.

In comparison, Vivienne Westwood’s oversized Chelsea coat at MoPOP looks as if it would also protect the wearer from the elements (at least as worn on the runway, where it floats above the model’s head on a wire halo). While Dr. Stevens would surely appreciate the hermit-crablike possibilities for evading enemies, the high-pitched overcoat could prove a major liability on a windy ferry deck (zoologist overboard!).

At the other end of the Seattle fashion spectrum is a spectacular gold number by 1950s Seattle designer Howard Blair. Revered for his wedding gowns and pageant dresses, Blair used 50 yards of gold silk (and less than subtly placed tassels) to create a highly structured evening gown and coat, worn by a member of the Fashion Group of Seattle at a 1959 event to promote postwar trade with Japan. As Project Runway’s Tim Gunn used to say, “That’s a lot of look.”

The piece has a solid competitor at MoPOP in emerging French designer Serena Gili’s bell-shaped gold fiberglass skirt with beaded cashmere top. Stunning, but does Gili’s dress actually ring? Blair’s did — he attached bells at the skirt so the wearer would be sure to make an entrance.

Not all the garments featured at MOHAI are Seattle-made. Some are in the collection because of the prominent local figures who wore the pieces. These garments show that even early on, the Seattle citizenry was savvy enough to have high-fashion frocks shipped in from far-flung style capitals when they knew Northwest casual wouldn’t cut it.

One such piece is a finely pleated purple “Delphos” gown from 1920, by Italian designer Mariano Fortuny. His gowns were considered radically modernist, as they could be worn without a corset. This one was owned by the also radically modernist Zoë Dusanne, Seattle’s first modern-art dealer. Dusanne (whose mother, Letitia Graves, founded and led Seattle’s first NAACP chapter) was instrumental in promoting the work of the Northwest School of painters, including Mark Tobey, Paul Horiuchi and Morris Graves.

It’s not a stretch to imagine Dusanne slipping on Alexander McQueen’s similarly silky and unfettered feathered dress for an artful evening out on the town in Seattle.

Louise Thiry was another creative fashion maven of the era (and mother of Seattle architect Paul Thiry, designer of the World’s Fair campus). Originally from Paris, Madame Thiry opened a boutique where she imported French couture and added her own label: Chez Mme Thiry. Her black sequined shift (c. 1929) looks different depending on the light — just like McQueen’s black beaded dress at MoPOP, which from the right angle reveals the face of his muse.

Of course, Seattle’s greatest contributions to fashion were spawned by our environment. The MOHAI exhibit features the earliest surviving Skyliner down jacket, created by Eddie Bauer in 1936, after the outdoorsman had a near-death hypothermia experience on the Olympic Peninsula. Without it, we might not have the current megatrend of “puffy coats,” nor the high-fashion version on view at MoPOP. Even Bauer might have approved of Chromat’s oversized ripstop parka, as it’s inflatable, which could come in handy in treacherous Northwest waters.

And speaking of Northwest water, if you live here, there is simply no escaping the rain slicker. In 1972, Seattle company Early Winters Ltd. was the first to make a consumer product using Gore-Tex, a tent called the Omnipotent. Soon after, the forward-thinking fashionistas at Mountain Safety Research had a bold thought, akin to, “That tent would look great on you.” The red-hooded MSR jacket at MOHAI, from 1976, is indistinguishable from those dripping water off coat racks all over the city today. It’s our uniform, our hair shirt, our wet badge of courage.

But for those hoping to add a few scattered showers of high fashion into their PacNW wardrobe, try this: On the next drizzly day, imagine pairing your standard-issue slicker with Charlie Le Mindu’s Cloudy Day headdress — embracing both climate and couture.

by / March 13
Article continues below