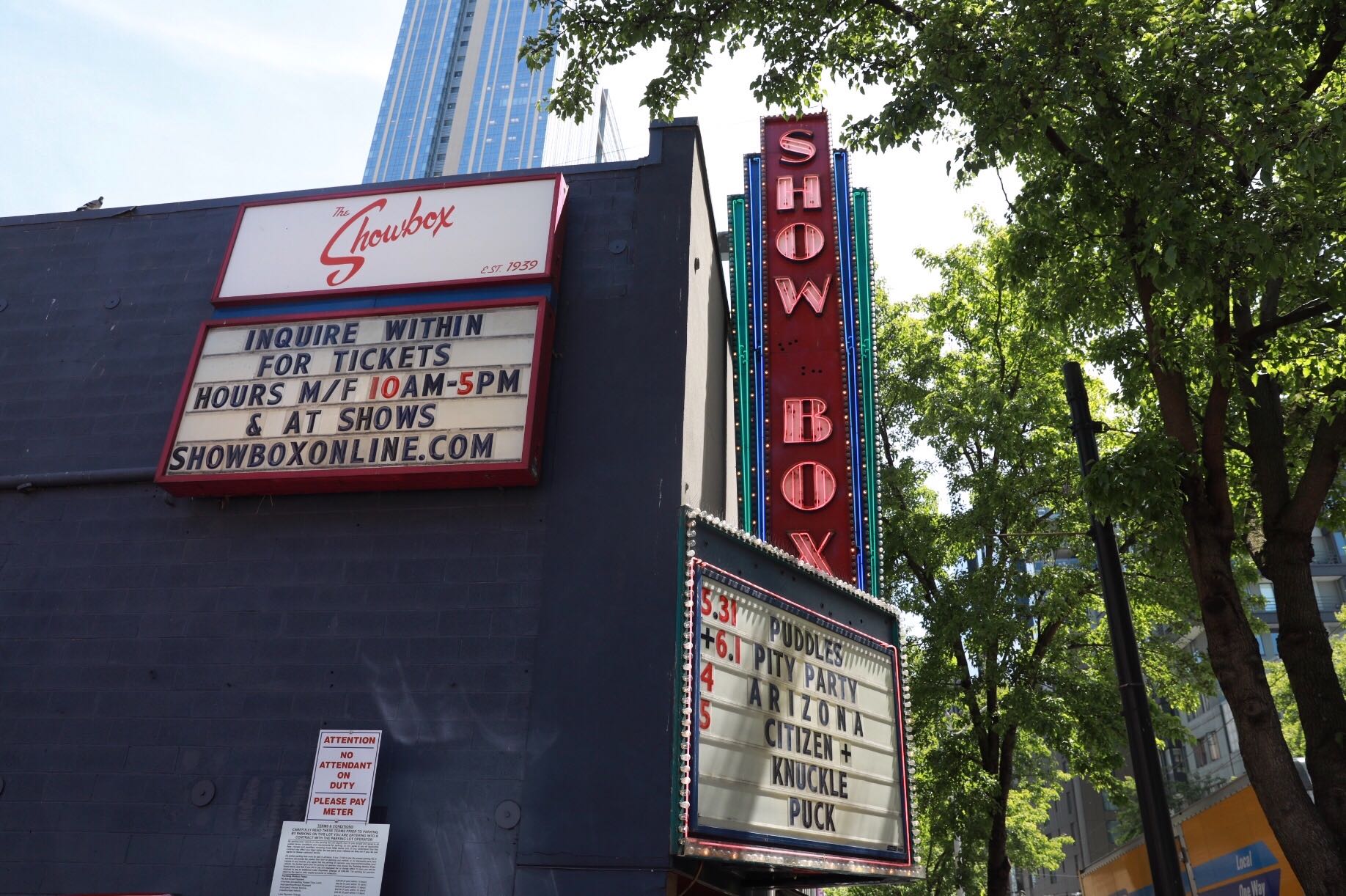 The fight to “save the Showbox” from becoming a residential high-rise tower has always had an existential quality to it, embodying a larger debate in Seattle over what it means to grow well.

And, as with anything related to growth, the tense conversation surrounding the 80-year-old venue’s future has progressed only in lurches. What had been a quiet 10 months ended this week, with a flurry of activity that, despite the noise, hardly clarified if and for how long music would continue to be played to crowds inside the First Avenue structure.

On Tuesday, a Seattle City Council committee voted 3-0, with one abstention, to extend by an additional six months the temporary preservation of the building from redevelopment — accomplished through a sort-of gerrymandering of the Pike Place Market Historical District to include the space. The council had originally approved a temporary expansion of the market’s boundaries last August, a designation scheduled to expire this month. The full city council will vote on the extension Monday.

The city’s hope is that in those six months it could do what it has not so far done: find an alternative buyer to purchase the building at 1426 First Ave. from its owner, Roger Forbes, and preserve the music venue inside. Historic Seattle has expressed interest in purchasing the building, but an initial offer has not been taken seriously.

Additionally, the extension would provide enough time for a consultant to finish a delayed examination of the effects of permanently extending the Pike Place protections to the Showbox.

In addition to the council’s Tuesday committee vote, members of the city’s Landmark Preservation Board voted Wednesday to nominate the entire venue, including the interior and exterior, for landmark consideration. They will make a final decision on July 17.

In making their case to the board, representatives of Historic Seattle argued the Showbox is associated in a “significant” way with the city’s heritage and that its exterior is important to the neighborhood. They were supported in these assertions by a long line of public commenters wearing black “Save the Showbox” T-shirts.

A team representing the building’s current ownership argued that the structure has been altered many times since its original construction and has served many different purposes other than as a music venue and should not be considered a landmark.

Ultimately, the board unanimously decided to put the nomination forward. “The purpose of a local landmark is to celebrate the importance of something in the community and that's what I'm seeing today," said board member Richard Freitas.

Even if it does eventually win landmark status, as it seems likely to do, that designation has limitations and would not guarantee that the space remains as a music venue.

“We’ve always said landmarking in and of itself will save not the Showbox,” Eugenia Woo of Historic Seattle said earlier this week. “It’s just a part of the advocacy toolbox.”

All of this occurs under a legal cloud. Forbes, the owner of the building that houses the venue — which is managed by the AEG corporation — sued the city last fall after the boundary expansion. Among other charges, he argued the move amounted to an illegal zoning change and demanded $40 million.

Despite glimmers of a legal détente, that litigation continues, with the first hearing slated in King County Superior Court on June 21.

Additionally, independent journalist Erica Barnett reported Wednesday that Forbes would not renew AEG’s lease when it expires in 2024, although the fate of the building will likely have been determined by that point, making the threat moot.

Since news first broke that a Canadian firm intended to purchase and redevelop the property, the battle over the downtown music venue has ballooned into a debate over the city’s future. Proponents have framed it as nothing less than a fight for the cultural soul of the city.

“Seattle’s history is entrenched in music,” Tiffany Jorgenson of Friends of Historic Belltown told the council Tuesday. “The Showbox is one of the last medium-sized venues left in the city. Please protect it for future generation so they, too, can be enriched by it, just as hundreds of thousands before them.”

Councilmember Kshama Sawant compared it to the effort — ultimately successful — to preserve the Pike Place Market. “The same question that came up then is coming up now, except in a much bigger way: What kind of city do we want?” she said.

Skeptics, though, question the importance of the music venue and whether the city should be getting so involved with a legal, private transaction. “The city has had many opportunities over the past several decades to apply landmark protections to 1426 First Avenue, but following extensive expert analysis has consistently decided against doing so until the sudden political action by the city council in August 2018,” said 1426 First Avenue ownership spokesperson Aaron Pickus. He added, however, that they would consider any market-value offers to purchase the building.

Attorney Jack McCullough argued Wednesday that the building should not be landmarked. “What you’re being asked to do here is to protect and preserve the use of this building,” which is not the board’s purview, he told the landmark preservation board. He added, “Resist the invitation to go beyond what your jurisdiction really is.”

For those who want to see the Showbox permanently preserved, the most legally solid option is to find the alternate buyer. Whether the other option — permanently expanding the Pike Place boundaries — is tenable likely depends on how the upcoming legal proceedings unfold.

If housing were to be built on the site of the Showbox, as was originally planned, the developers would be required to make affordable housing contributions under the city’s new mandatory housing affordability law. Responding to questions Tuesday from Councilmember Abel Pacheco, who abstained from voting to extend the protections, a central staff member guessed that that contribution would be about $5 million.