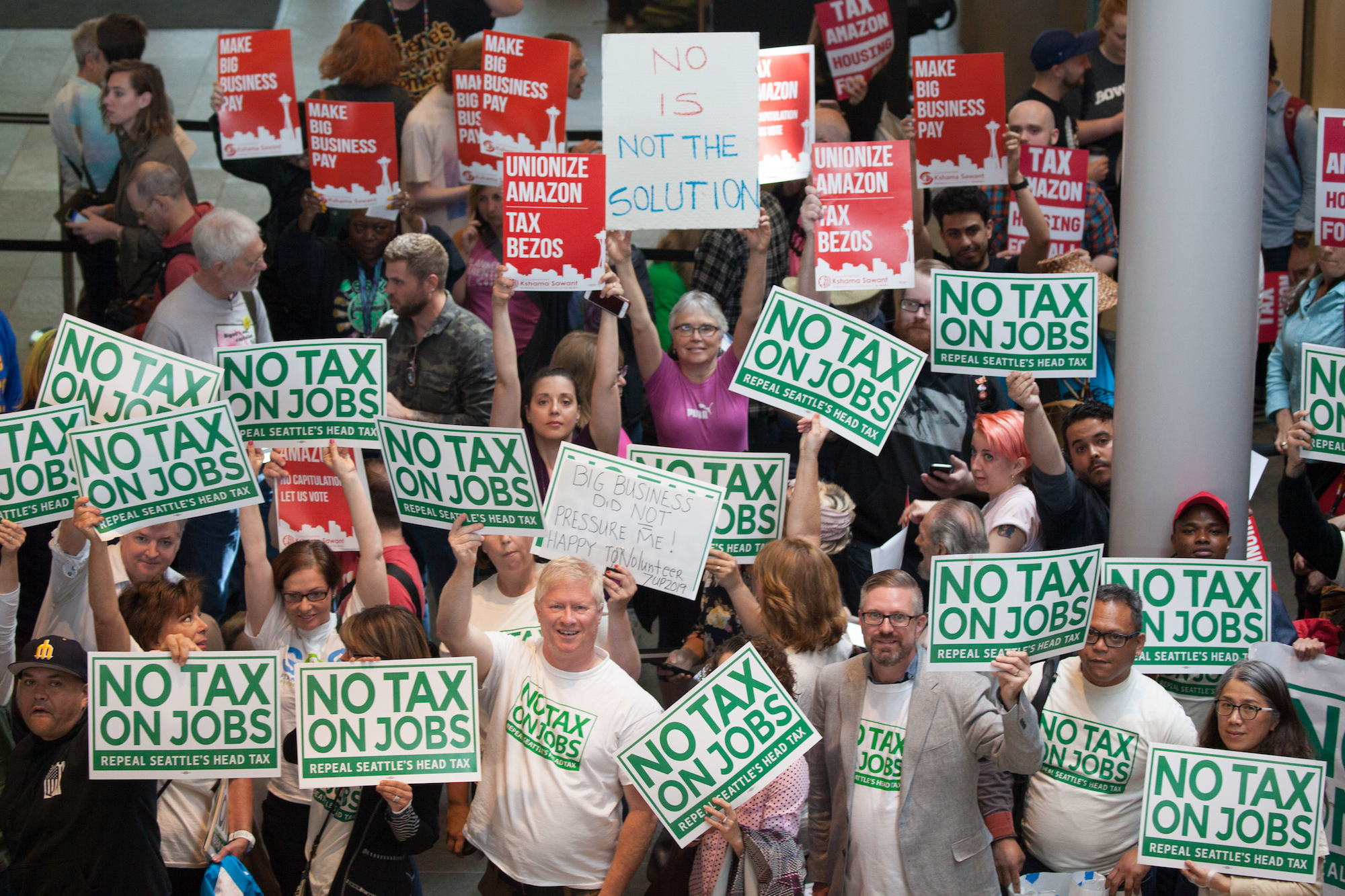 Proponents and opponents of the head tax wait in line prior to a city council vote that repealed the head tax at City Hall in Seattle, June 12, 2018. (Photo by Matt M. McKnight/Crosscut)

On June 11 the news broke that private donors, including Amazon, Microsoft and Connie and Steve Ballmer, will contribute $48.8 million to the Seattle nonprofit Plymouth Housing to build supportive housing for people exiting homelessness. Trying to fathom the sensation this news provoked in me, I recalled the spectacular sunsets of last summer’s wildfire smoke: impossible not to celebrate in their outward aspect, but with an underlying significance that is profoundly unsettling.

Plymouth’s haul is the largest windfall yet in the city of Seattle, among several recent announcements of corporate action on homelessness. Starbucks, Vulcan and Alaska Airlines helped Pearl Jam raise $11.5 million last summer. The Day One Fund that Jeff Bezos launched last fall named one Seattle-area nonprofit among its first recipients, bestowing $2.5 million. Microsoft’s $500 million commitment, of which 95% consists of loans, will focus on low- and middle-income housing on King County’s Eastside; the remaining 5% is the source of Microsoft’s $5 million pledge to Plymouth.

Plymouth hopes to build 800 new apartments by raising the private donor total to $75 million and leveraging $250 million more in government funds. One of Seattle’s largest low-income housing providers, Plymouth has demonstrated success with the “housing first” model, providing permanent housing and supportive services for people with the least income and the greatest challenges. This new initiative could make a real dent in our city’s crisis of chronic homelessness. It’s easy to applaud the generosity of the donors who stepped up to make that possible.

But let’s be honest, this donation is more than a donation. Clearly, it also constitutes an argument. Unveiled exactly one year after the repeal of Seattle’s ill-fated “head tax,” it’s hard to miss the symbolism of the gesture. It says: “That was the wrong way. This is the right way.”

But is it really the right way? There’s a big difference between showy gifts — with no apparent promises of more — and consistent revenue that governments can count on and plan with. This $48.8 million gift is around what the head tax (aka employee hours tax) would have raised per year. And even that is significantly less than the $75 million of the original legislation, which would have put Amazon alone on the hook for tens of millions per year, before Amazon negotiated it down. It’s also far, far smaller than the big business tax voters in San Francisco approved last fall to address their city’s homelessness crisis.

The scale and reliability of funds are only part of the point, however. Imperfect as they are, our governments are built around hard-won mechanisms for democracy, transparency and accountability. Philanthropy dispenses with all of that. To everyone who likes to complain about the city council, remember: Jeff Bezos won’t sit and listen to your public testimony, his company’s finances are not subject to extensive public disclosure and, if you don’t like what he does, you can’t vote him out.

We shouldn’t have to rely on corporate largesse to meet basic social needs. That’s what government is for. We’re in this sorry situation because, contrary to what you might read on NextDoor, the needs far outstrip existing revenue. Local governments across the country are grappling with the fallout of social crises decades in the making: widening inequality and cuts to federal safety net programs; fraying community and family support networks; an epidemic of depression, social isolation, mental illness and opioid overprescription; mass incarceration and systemic racism. There’s a national shortage of affordable housing, with 156,000 missing affordable homes in King County alone. Add to all that the infrastructural demands of urban growth on steroids, and the existential urgency of slashing carbon emissions and preparing our communities for climate change, and it’s no wonder we’re having trouble keeping up. #LateCapitalism and all that.

Opponents of the employee hours tax, including the big business lobby, loved pointing to growth in the city budget, ignoring the far faster growth of the challenges the city is called upon to address. With the tax’s repeal and the Legislature’s inability to make more than incremental movement on progressive revenue this year, Seattle will continue to face the question of how to meet needs without further taxing low- and middle-income residents.

Unfortunately for our prospects on this front, this $48.8 million donation is not only more than a donation, it’s also more than an argument. It is a strategy, or rather a piece of a strategy, to stymie any future efforts to tax big business.

Last year’s battle called attention to the causal role of Amazon and other drivers of our regional economy in soaring housing costs and homelessness. Having emerged victorious and monetarily unscathed, Seattle’s wealthy corporate class is still feeling the pressure to contribute to solutions. Some philanthropic fireworks are an obvious way of releasing this pressure and winning points with the public.

At the same time, Amazon and business groups are preparing to pump large sums of money into electing city council members who will not try to tax them again. Smelling blood, they are not making a big secret of their strategy. You can bet they will amplify the austerity narrative, arguing that the city needs better fiscal management, not new revenue.

In short, our corporate rulers are investing in a future that preserves our ultraregressive tax system just the way it is. If you think this is narrowly about the “head tax,” recall that Jeff Bezos and Steve Ballmer, then Microsoft’s CEO, spent $100,000 each to defeat a progressive statewide income tax in 2010. Big tech benefits from our state’s unusual lack of a personal income tax — it’s like a publicly subsidized annual bonus for each of their high-paid employees! — as they do also from our regressive way of taxing business. As far as they’re concerned, poor people can keep paying taxes at rates six times higher than rich people. That suits them just fine.

So, to Amazon and the rest: Thank you, the donation is much appreciated, but the implied argument about how to address homelessness is wrong. And the larger strategy on taxation should terrify us all. The more governments are starved of the ability to address basic needs, and the more we peons feel that our quality of life — our housing, our jobs — depends on the capricious generosity of the wealthy, the more we slide toward a society based on vertical relationships of patronage, and away from democratic ideals of equality, rights and representation. We all start making decisions based on who is getting what from whom, rather than any sense of a public interest. There’s plenty of that in our politics already. Let’s not rejoice too much at moves that erode democracy even further.