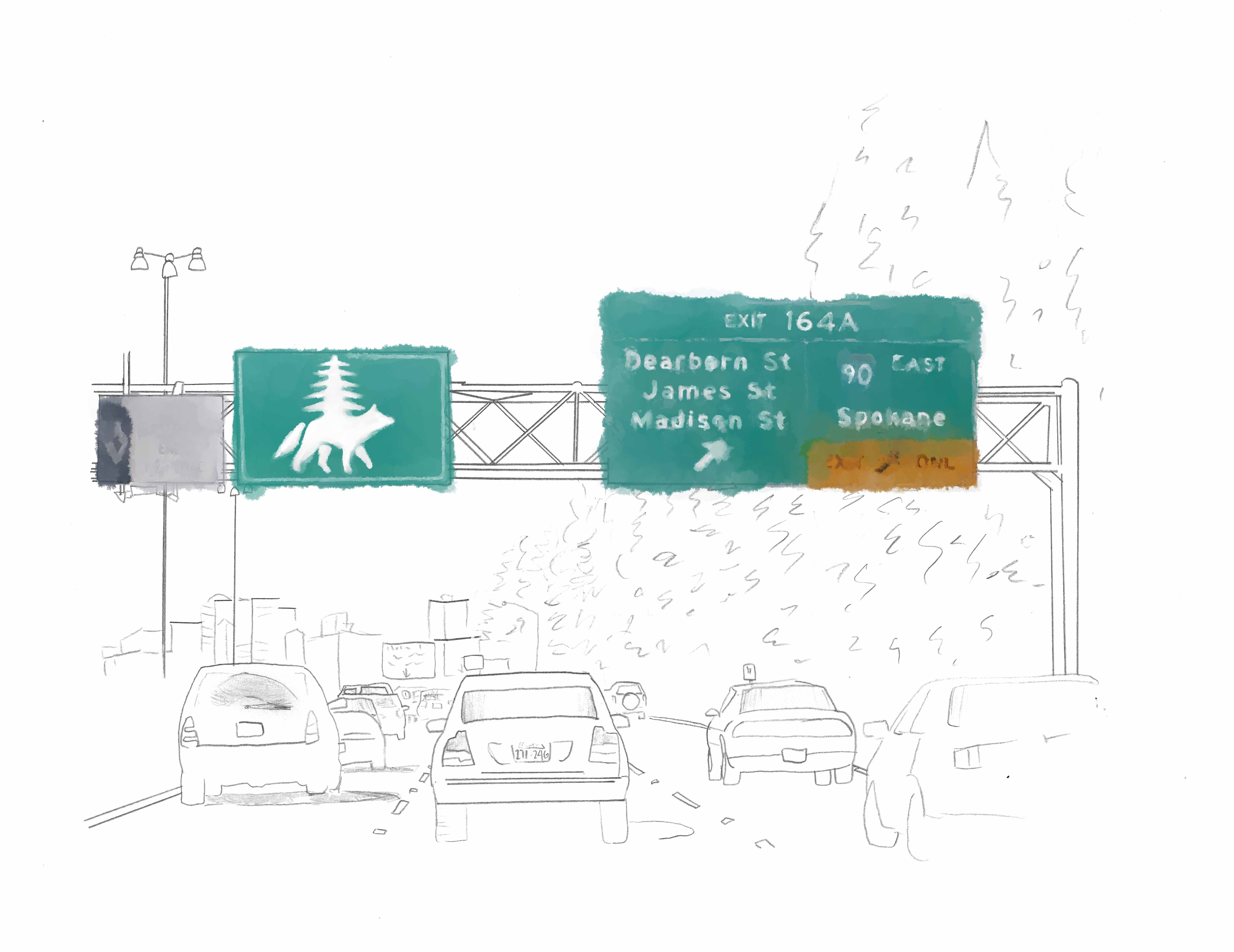 Curiously outfitted creatures — a polar bear with a space shuttle strapped to its back, a raccoon bearing a Winnebago camper topper, a wolf sprouting a pagoda from its spine — line a hall at the Center for Architecture and Design. These street-art style mashups come courtesy of Seattle art collective Electric Coffin, whose “Unio” series visually unites animals with man-made technology in the hope of sparking surprise, making unexpected connections and jolting viewers out of well-worn mental ruts.

The intriguing characters are featured in the group’s new exhibit, Discover + Disrupt, which asks, what might a more artful public cityscape look like? Using artwork and architectural schematics, the show (on view through August 31) presents several playful arguments for more visual breaks from mundane city systems. The striking symbology in the Unio series, for example, could crop up on highway signs, installed next to standard directional signs. Or perhaps it could be used as creative signposts along pedestrian and bike byways, such as the Burke-Gilman trail.

Electric Coffin is known for bringing vivid, large-scale installations to local restaurants (the bisected boat behind the bar at Westward, the 14-foot-tall howling wolf at The Dynasty Room) and corporate offices (including Facebook and Amazon). With Discover + Disrupt, the artists aren’t suggesting the elimination of necessary way-finding tools, such as stop signs and exit markers, but rather augmentation of the urban landscape with bright bursts of color, creative iconography that suggests human and animal nature, maybe even a profusion of faux flowers or polka dots.

“It can be really stressful to traverse the city,” says Stefan Hofmann, the other Electric Coffin partner and co-founder (the third co-founder, Justin Kane Elder, left the collective to go solo earlier this year). It sounds like an obvious gripe, but Hofmann and his colleagues are calling for a civic solution that relies more on imagination than infrastructure.

“All the signs we see are telling us either what to do or what not to do,” Hofmann says. “What if moving through the city also included moments of discovery — more deliberate beauty?”

Discover + Disrupt also suggests a proliferation of art in places traditionally reserved for advertising, namely billboards. “So much creative energy is focused on selling things,” says Hofmann. “That’s a drastic waste of creative talent.” By way of example, Electric Coffin presents a billboard-style collage of clashing cultural imagery — strawberries, flowers, skulls, coral, McDonald’s fries and smashed Budweiser cans. The vibrant hodgepodge is a backdrop for the phrase “Space Dust” (writ large in black velvet), a nod to astronomer Carl Sagan’s assertion that we are all made from cosmic dust, as well as the idea that since we’re only on the planet for a short time, we might as well enjoy the ride.

“The whole concept is to challenge the status quo of where art fits into city planning,” says De Armas. “Cities are designed for productivity and consumerism,” he says. “There are well-engineered systems based on efficiencies. But the whole human experience isn’t based in productivity. Encouraging people to have fun has a lot of merit.” The group’s premise is simple: creativity and levity encourages connection.

In one corner of the exhibit, a wall panel is covered with an eruption of colorful crocheted forms, twisting and bubbling against each other like creatures on a coral reef. Next to it, an architectural schematic depicts a similar rash of color crawling up the golf-tee stem of the Rainier Tower. The idea is to unify city blocks — which contain wildly varied storefronts, apartment buildings and offices — with one notable design (flowers, polka dots, stripes) that appears on all and stimulates “visual camaraderie.”

“As we’re growing as a city, there’s a diversity of old and new buildings,” De Armas says. “It feels disjointed, and people feel disoriented. This [common design element] could help communities feel cohesive. Things will continue to change and evolve, but this is a way to tie it together and build community.”

A room decked out floor to ceiling in pale blue diagonal stripes suggests another way to build community: immersive murals that revivify an alley via eye-grabbing blocks of color that extend up the surrounding walls and across the ground. De Armas points to the “pink alley” in Vancouver, B.C. (part of the city’s More Awesome Now alley activation program) — a previously underutilized space that since being splashed with color and basketball courts has become a hot spot for fashion shoots, public events and of course, Instagram shots. “When a space becomes recognizable, with social currency, you can really change a neighborhood,” he says. 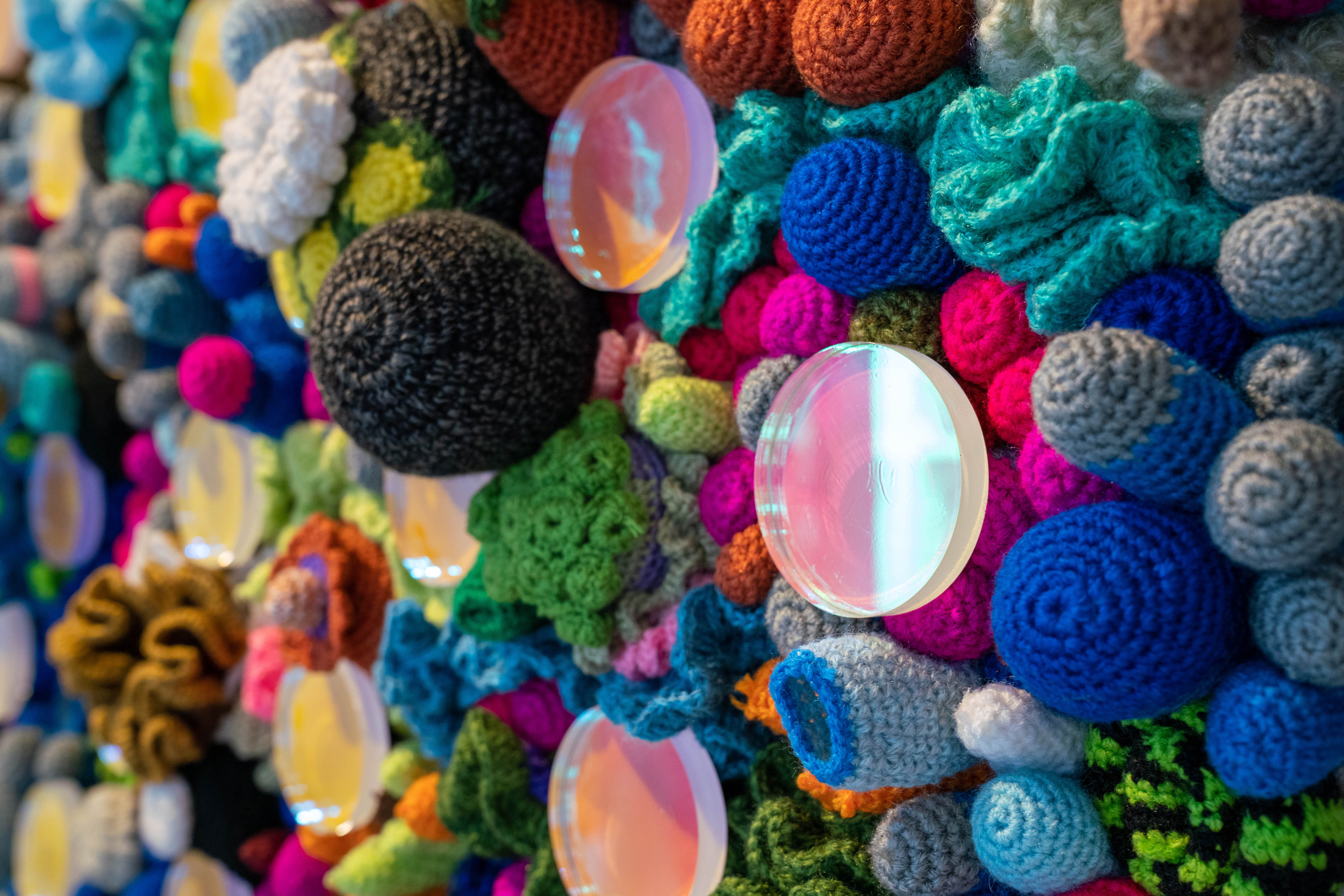 A detail of the crocheted installation by Electric Coffin at the Center for Architecture & Design. (Photo by Trevor Dykstra)

A detail of the crocheted installation by Electric Coffin at the Center for Architecture & Design. (Photo by Trevor Dykstra)

Hofmann says ideas like these awaken people to art — especially those folks who might otherwise think art isn’t for them. “Art has been relegated to the museum and gallery world. It often feels cordoned off,” he says. “We want to integrate it with daily life in a natural way.”

Seattle has had success with similar artful endeavors. The renovations of Nord Alley in Pioneer Square and Canton Alley in the Chinatown-International District have activated those spaces with wedding shoots, outdoor movies and parties. In addition to murals, Urban Artworks paints animated scenes on signal boxes, bringing surprise and delight to countless crosswalks. And the recently completed SODO Track offers art to anyone using public transit in the mural corridor.

“We’re not reinventing the wheel,” De Armas says. “People have been doing things like this in other places.” But Electric Coffin wants to sneak even more art into the city — on light poles, trash cans, traffic cones, mailboxes — to balance the baseline of municipal functionality with art-forward opportunities for transcendence.

It’s a lovely image, but are these proposals more dream than reality? “If you ask my opinion, it’s 100 percent possible,” De Armas says. “We’d love to do all of it.” He acknowledges the large number of people, businesses and organizations that would have to sign on to make such a landscape shift. “There are a lot of factors,” he admits. That’s why Electric Coffin and the Center for Architecture and Design are organizing a panel of relevant parties, inviting architects, developers, SDOT and the Office of Arts and Culture to discuss the real-world possibilities for these artful ideas (July 16 at 5 p.m. Free and open to the public).

The group hopes Discover + Disrupt will ignite creative thinking among people who have the power to affect our daily experience of the city. How might our perspective change, if the markers dotting our everyday commute contained not just directions and advertisements, but instances of art? “We’re always trying to get people to think about what makes us human,” De Armas says. “We’re trying to push the best parts of humanity forward: exploration, freedom and love.” 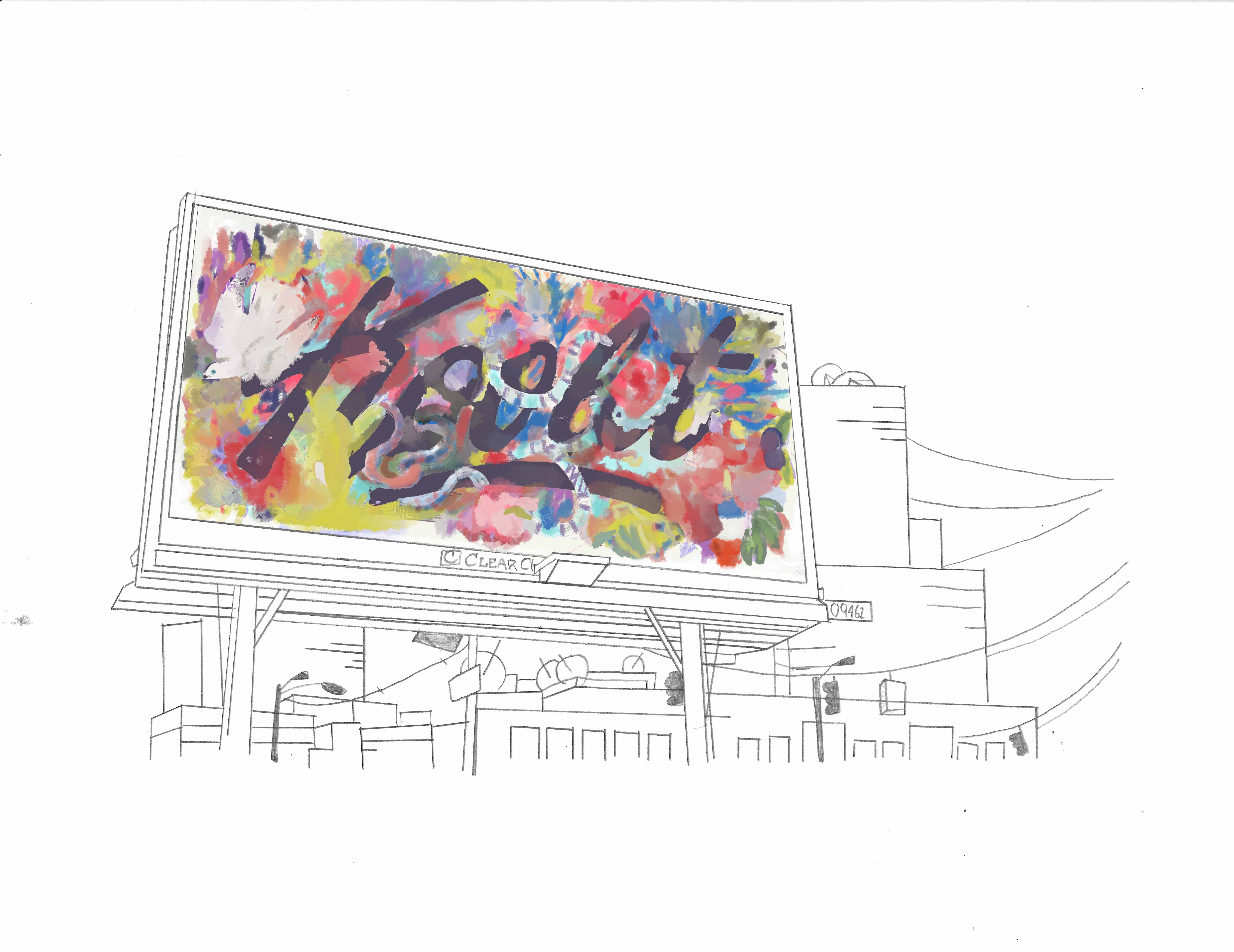