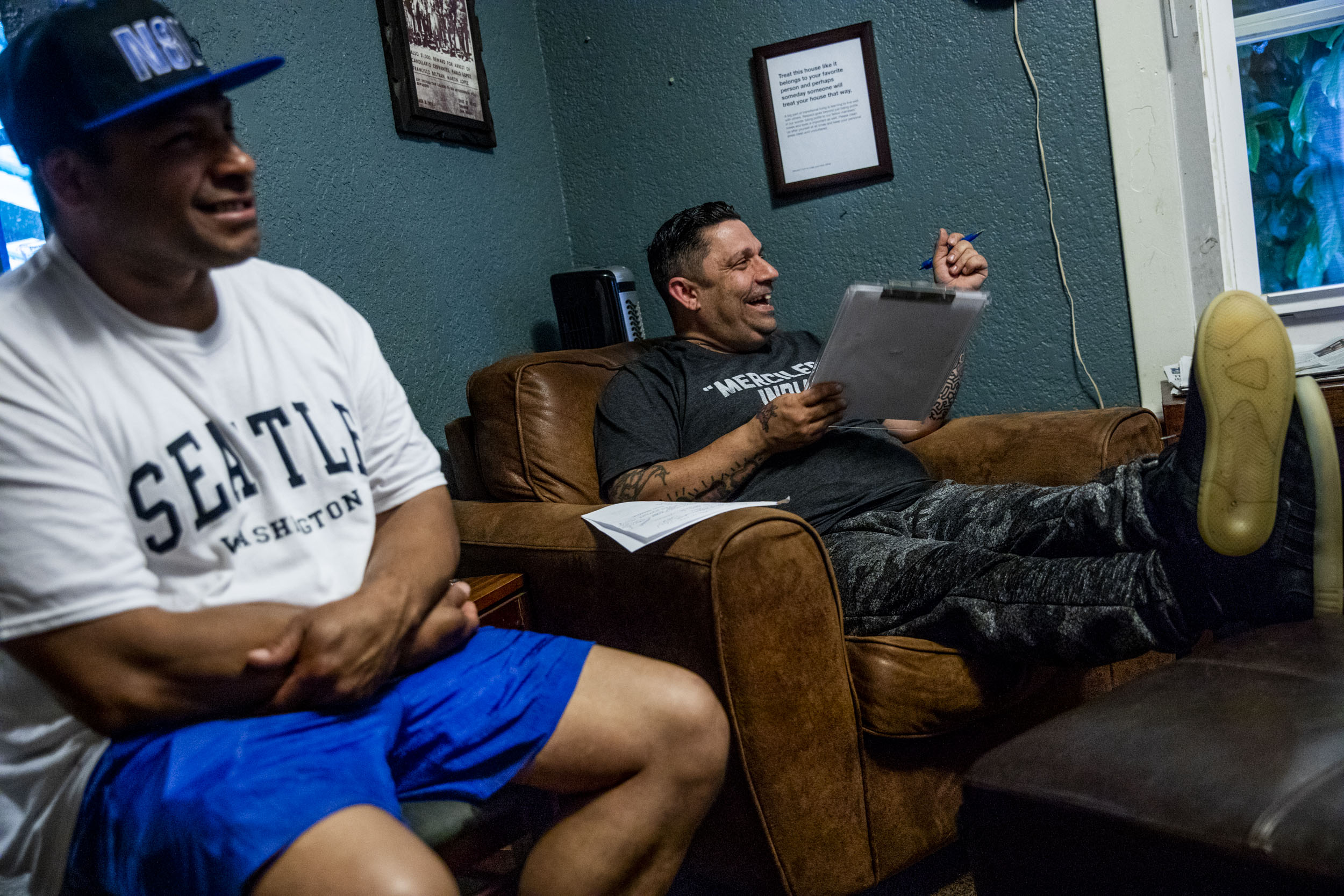 For Rick H., seeing the cruise ship last week was a sign. He had just left work in the kitchen of the Marriott on Seattle’s Waterfront. He was tired from the long shift that had him there until 4 a.m. As he was crossing the street to head home, he looked up and spotted the ship docked a stone’s throw away.

“My dream has always been to be on a cruise ship,” he explained, showing a picture of the ship on his phone to other men in the room. “When I was a kid I used to watch The Love Boat with my grandpa and say, ‘I want to be on there.’ Seeing that ship made me think I’m almost there. I figure, a couple years if I work at Marriott, I’ll tell my executive chef that’s my dream [to work on the ship]. I think he’ll say go for it. I feel it coming. As long as I stay sober, one day at a time.”

Rick was sharing his experience with his roommates Jason V. and Solon Young on a recent Monday evening at their weekly check-in meeting. Another member of the program, David Lewis, joined them for the meeting that night. Two of the men requested Crosscut not use their full last names.

The men gathered around the living room of the aging three-bedroom bungalow where they live, near the Mount Baker light rail station. Framed house rules, inspirational quotes and art hung on the walls. The air was thick with the scent of sage smoke. Jason, who serves as house manager, burned some to start the meeting. He, Rick and Solon are all Native American, and, he explained, “We burn sage to clear away the hustle and bustle of the day and focus ourselves in the moment so we can share with each other. It's a Native tradition to 'wash with the smokes.’”

The check-ins are a time for the men to reflect on how the past week went, revisit their goals and set three new ones for the week to come. Those goals can be about self-care — Jason and Solon both want to work out more; Rick wants to lay off the sweets. They can be “reinstatement” goals, such as paying legal restitution or applying for social services. And the goals can deal directly with aspects of their recovery, such as making counseling appointments or finding a new Alcoholics Anonymous meeting to attend.

Jason, for example, once lived in Seattle’s notorious homeless encampment, the Jungle, committing crimes to support his drug addiction before he finally surrendered himself to the police and got sober in prison. Now, in addition to living at the Mount Baker house and serving as house manager, he works for a nonprofit called Weld, which oversees the management of his household and helps house and support other men and women like him, as they re-enter society after prison terms or extended homelessness.

The men’s time in Mount Baker is limited. Like many of Seattle’s worn-down bungalows, their current home is slated for redevelopment — in this case, several of the houses on the block were bought up by a developer who has applied for permits to build a seven-story apartment building.

But this is not your typical Seattle story of low-income residents displaced by development. Jason didn’t move into the house until after it had been bought by the developer, and he knew from the beginning that the place eventually would be torn down. He and his housemates would not, in fact, be living there if it wasn’t going to be torn down.

All of the 12 homes that Weld currently manages are slated to be demolished for redevelopment. The developers allow Weld to temporarily house their clients in the homes until construction of the new buildings begins in earnest.

“There’s a number of benefits for the property owner, with the obvious one being not having your house be vacant,” said Jody Bardacke, Weld’s program manager. “My basic pitch is you don’t have to worry about the house burning down because of meth users squatting in there or have the city and county telling you to board up the house or fining you.” 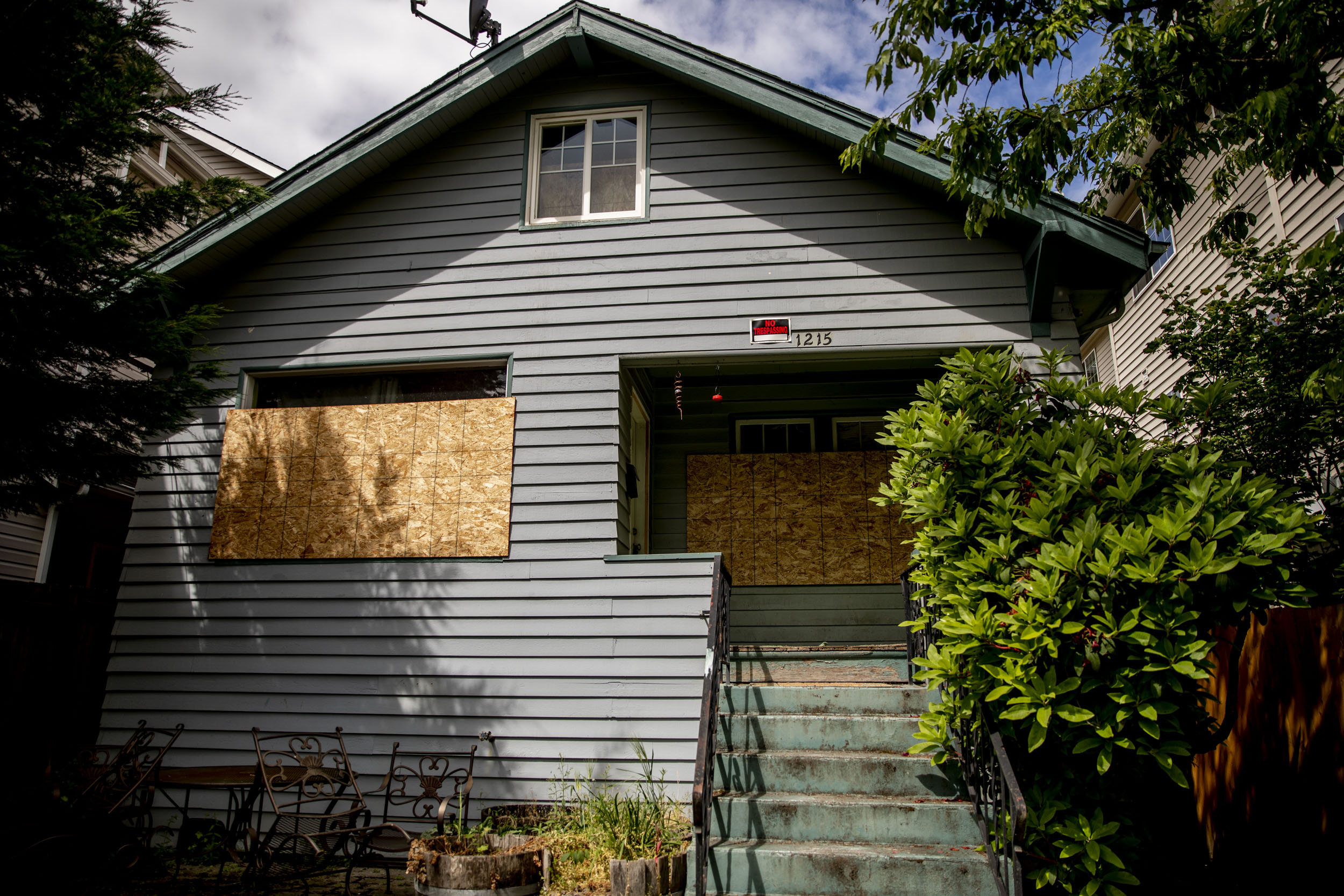 A vacant house in Queen Anne on June 7, 2019. (Photo by Dorothy Edwards/Crosscut)

A vacant house in Queen Anne on June 7, 2019. (Photo by Dorothy Edwards/Crosscut)

The booming economy actually has resulted in an increase in vacant buildings and complaints in Seattle in recent years. And city officials would like to see more people living in would-be vacant buildings, whether it’s the clients of nonprofits serving homeless residents or market-rate renters.

From 2013 to 2018, the number of complaints about vacant properties registered with the Seattle Department of Construction and Inspections (SDCI) jumped to 568 from 265 annually. In 2015, SDCI investigated just 62 vacant building cases. The following year the number jumped to 215.

Some of the vacant properties are owned by people who live out of state, are too poor to fix them up, or just don’t care. But, SDCI spokesperson Bryan Stevens explained, redevelopment is a major factor in the rise in vacancies.

Development does not begin when a developer buys a property. Instead the teardown and rebuilding are put on hold while the company files for permits. The process is slow, taking nine to 12 months for new single-family home construction and often several years for a new apartment building. In many cases, developers just let the property sit empty.

“If you’re not keeping up with maintenance, a vacant house can fall apart within weeks or a month,” said Stevens. That can lead to trespassing, squatters moving in and other problems the property’s neighbors want to avoid.

SDCI has taken steps in the past year few years to address vacant buildings. In 2017, it set new standards for boarding up vacant buildings with beefier materials to keep people out. Last fall, it reduced from 12 to six months the amount of time a building must be vacant before a developer can tear it down. The standards apply to single-family homes, apartment buildings and commercial spaces alike.

Now, the city is taking things further with a more proactive policy that kicked in June 1. In the past, the vacant building program was complaint-based. Someone had to call in to report problems. An SDCI inspector would visit the site to substantiate the problem, then do quarterly follow-up inspections until the problem was resolved.

Under the new policy, developers applying to demolish a building for a new project will have to automatically register their vacant buildings to the program. Inspections will take place monthly. If a building passes three inspections, meaning the property is in good shape and not open to trespassing, it will be removed from the list. SDCI expects that proactive approach will increase the number of vacant buildings in their caseload from about 100 a year to more than 1,000.

Stevens said SDCI is hoping developers avoid the issue entirely by keeping inhabitable homes occupied until it’s time to demolish the building. “It’s not necessary to keep the property vacant while undergoing redevelopment,” he said. “There are opportunities to continue tenancy or find short-term caretakers to help keep the property in good shape.”

SDCI sees programs like Weld’s as part of the solution, along with Mary’s Place, a nonprofit homeless shelter and service provider. Mary's Place uses 10 would-be vacant properties with 580 beds in the Seattle area to serve as temporary shelter for homeless families. They have a few single-family homes in their portfolio, but mostly use larger buildings, such as businesses and motels.

Weld has used 25 houses around Seattle since the nonprofit was founded in 2017. It has served 110 people, 39 of whom have since moved into permanent housing. The minimum amount of time they occupy a house is six months, and the home must meet certain living standards set by Weld. For instance, the company does basic maintenance work before clients move in, and occupancy is limited to two people to a room. “We house people, we don’t warehouse them,” said Bardacke.

The program began somewhat organically. Its founder, Amy King, co-owns Square Peg Development, a residential construction company. The company had hired several formerly incarcerated individuals on its construction crew and later learned they were homeless, sleeping in their cars and elsewhere, in part because it’s often hard for ex-felons to find housing. The Kings started housing people in vacant homes on sites they owned and planned to develop. Word got around among other developers who offered up their vacant properties to temporarily house people as a way to deal with the problems of leaving the spaces empty. The idea snowballed into its current form as Weld. King also founded another business called Pallet Shelter that builds pre-fabricated tiny homes that are used as homeless shelters.

The Mount Baker house is one of Weld’s longest-occupied properties. The program has had it for a year and a half now and, because multifamily construction permits take so long to line up, Weld expects to have it well into 2020. The property is owned by notorious Seattle landlord Carl Haglund, after whom a 2016 law dictating new, more stringent building standards was named.

Haglund told Crosscut that he lets Weld use the property because “I like the mission and I support worthwhile charities. … I’ve never met any people more motivated to live straight and sober lives. It’s so cheap to help these people. It’s tragic there’s not more groups like Weld doing this work.”

Though he supports Weld, Haglund criticized SDCI’s new policy. He said in the case of uninhabitable buildings, the new approach just doesn’t work: “We’d love to demolish these properties, but can’t until we get permits. Instead they insist we board up the building and collect a fee.”

At the house meeting, nobody talked policy or demolitions or would-be vacant buildings. They talked about what it means to them to have a home and a sense of community. Rick had just moved into the Mount Baker house two weeks prior. Before that, he had spent a year living in an apartment on Capitol Hill paid for by the state’s Housing and Essential Needs program.

An apartment all to yourself might seem like a dream after time in prison and time on the streets, but for Rick, “it wasn’t all that. I was living in isolation. Go to work, come home, go to meetings, fall asleep with the TV on.” When he met Jason and learned about Weld, Rick decided, “I needed to get back in the fellowship. I needed some accountability, some chores. And I’m really liking it.”

Correction: This article has been updated to reflect that Weld houses women as well as men and that Amy King was the sole founder of Weld.