How solar could make tribes in WA energy independent

After a 2016 fire left the Spokane Tribe without water or power, the community turned to solar for back up. Will other tribes follow suit? 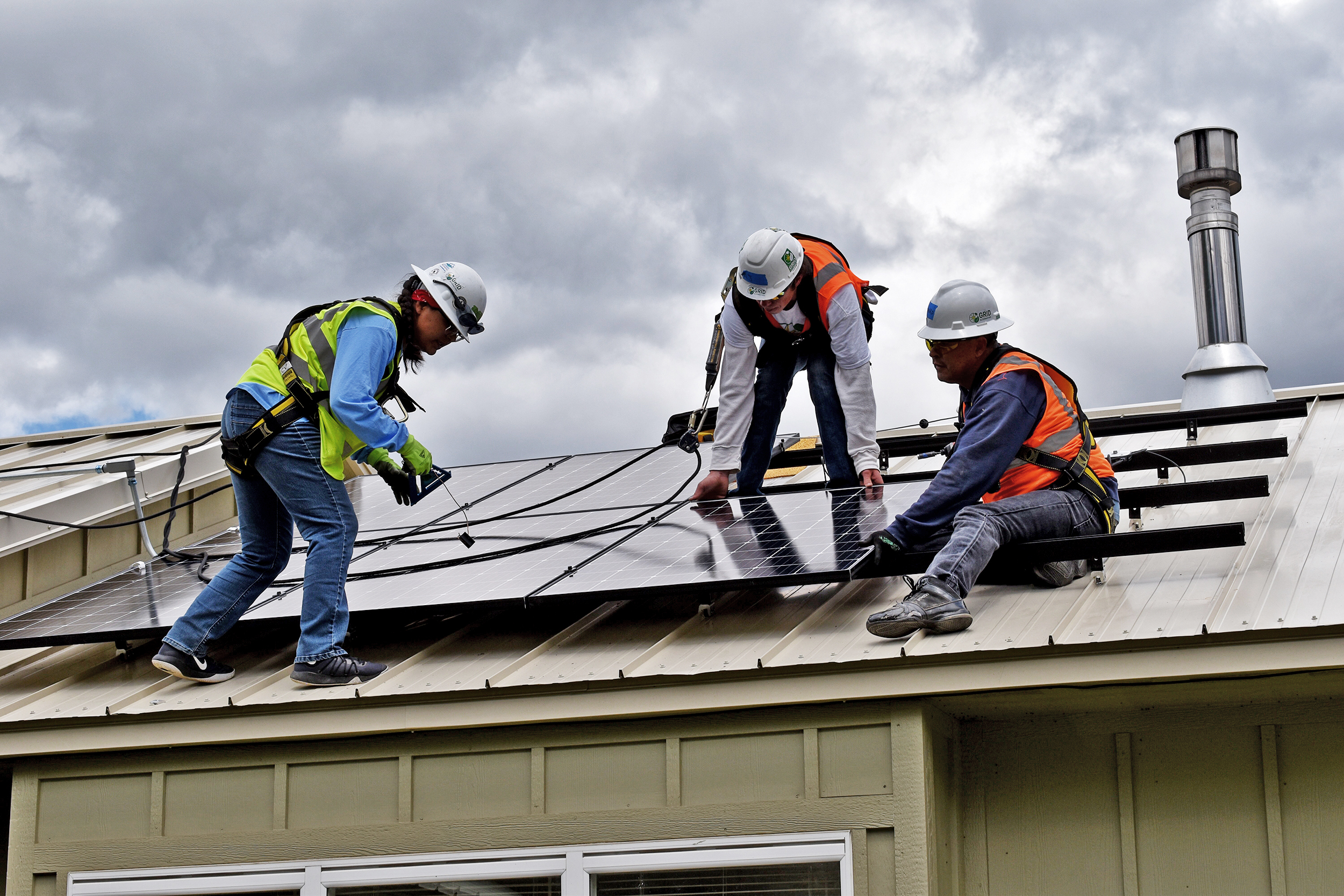 When solar installations at the Spokane Tribe reservation began four years ago, Jesse Ramos says he'd never seen anything like it. To Ramos, solar energy wasn't a possibility for the tribe. It seemed financially inaccessible, he says.

“I’d never even heard of affordable tech before that,” Ramos says. He definitely didn't expect to become a solar installer himself: “I just thought there was no way that I’d even be able to go into that field or be around anyone that’s in that field.”

After solar panels were added to a few buildings in 2015, Ramos received job training to become a solar installer himself. He’s one of a handful of tribal members who have been trained to install panels by solar installation company GRID Alternatives. Now, with the help of funding in part from the Department of Energy and the Tribal Solar Accelerator Fund (a partnership between GRID and the Wells Fargo Foundation), the Spokane Tribe Housing Authority is now overseeing the installation of solar panels on 23 homes and nine community buildings the tribe owns. Those include the reservation’s fishing hatchery, administrative building and the housing authority’s facility, where Ramos usually works as a building analyst when he isn’t doubling up as an installer.

The tribe, which has its offices in Wellpinit, about 50 miles northwest of the city of Spokane, has been working on introducing and expanding solar for several years. Earlier solar installations on houses reportedly cut electrical bills dramatically for residences, which, as the Spokane Spokesman-Review noted, have no access to natural gas service. Once completed, the current solar project is expected to provide enough electricity to save the tribe $2.8 million over 30 years. The tribe already sells some solar-produced electricity to Avista Utilities.

Tim Horan, executive director of the Spokane Indian Housing Authority, hopes that the new solar infrastructure, beyond being beneficial economically, will also bring something else: energy sovereignty. That means that issues involving energy, like the inability to easily access it on tribal land, can be solved by creating an independent, reliable and ecofriendly infrastructure. It’s an idea that's attractive to tribes across the country, especially those lacking access to energy or interested in combating climate change.

For Horan, energy sovereignty through solar could also mean protecting the tribe’s resources after a wildfire. He worried about the tribe’s dependence on outside sources of energy in the aftermath of the Cayuse Mountain Fire in 2016, when a blaze destroyed 14 homes, burned through 18,000 acres and came within a mile of the tribe’s administrative offices. The damage was Horan’s wake-up call. Without the U.S. Forest Service and tribal firefighters, Horan says, “We would have lost our entire administrative capacity for the tribe.”

As if that weren't enough, Horan adds that the tribe also lost power and water for five days following the fire. He says “it shut the tribe down,” leaving the tribe’s offices for health care, housing, natural resources and others in the dark.

“I had been doing some exploration into solar and after the fire happened, then we just moved right into looking into how to apply … for funding,” Horan says. He’d already seen from the tribe's smaller projects what solar could do; now he was interested in what it could it do if it was everywhere.

GRID Alternatives National Tribal Solar Program director Tim Willink, who is Navajo and once worked for the Navajo Nation’s D.C. office, says he has noticed that tribes’ interest in solar, while linked to economic benefit, are also often about being greener, too.

“I think that indigenous nations have experienced and witnessed firsthand the effects of extractive industries, and some have perhaps along with that [seen] some of the negative effects,” he says. “And tribes have always expressed a holistic approach to energy development. From a cultural aspect, tribes are more in line with renewable energy.”

While Willink says GRID’s only current project in the Pacific Northwest is with the Spokane Tribe — which also happens to be one of the larger projects GRID has done since the program began — he’s seen growing interest in solar among tribes in the region and beyond. The Spokane Tribe hosted other interested tribal leaders at a celebration for the tribe's solar project last month.

Among those in attendance was the Cowlitz Indian Tribe housing director Sheryl Bertucci. She says that her tribe’s needs are different from the Spokane’s; the Cowlitz Tribe was federally recognized recently, in 2002, so it doesn't have a reservation where a concentration of tribal members live. But the tribe does have a facility in Lewis County for elders that could use an upgrade.

“This facility is huge and our light bill for the common areas [is] over $3,500 a month,” she says. And besides that, she says: “The environment is very important to us and being green is our No. 1 concern. No. 2 is if we can cut back on costs.”

While work on the Spokane Tribe reservation project has been underway for the past two months, Horan foresees another month until the solar installations are finished. While the project covers a good chunk of the tribe’s administrative facilities, Horan is already seeking more funding through the Department of Energy with the goal of one day powering the whole tribe through solar.

This round of solar installations doesn’t include a battery backup to store energy, which would be key to staying operational during a fire like the one in 2016, so Horan says that’s next on his list of projects.

Even so, Willink says that “when you drive in [to the reservation], you see solar.”