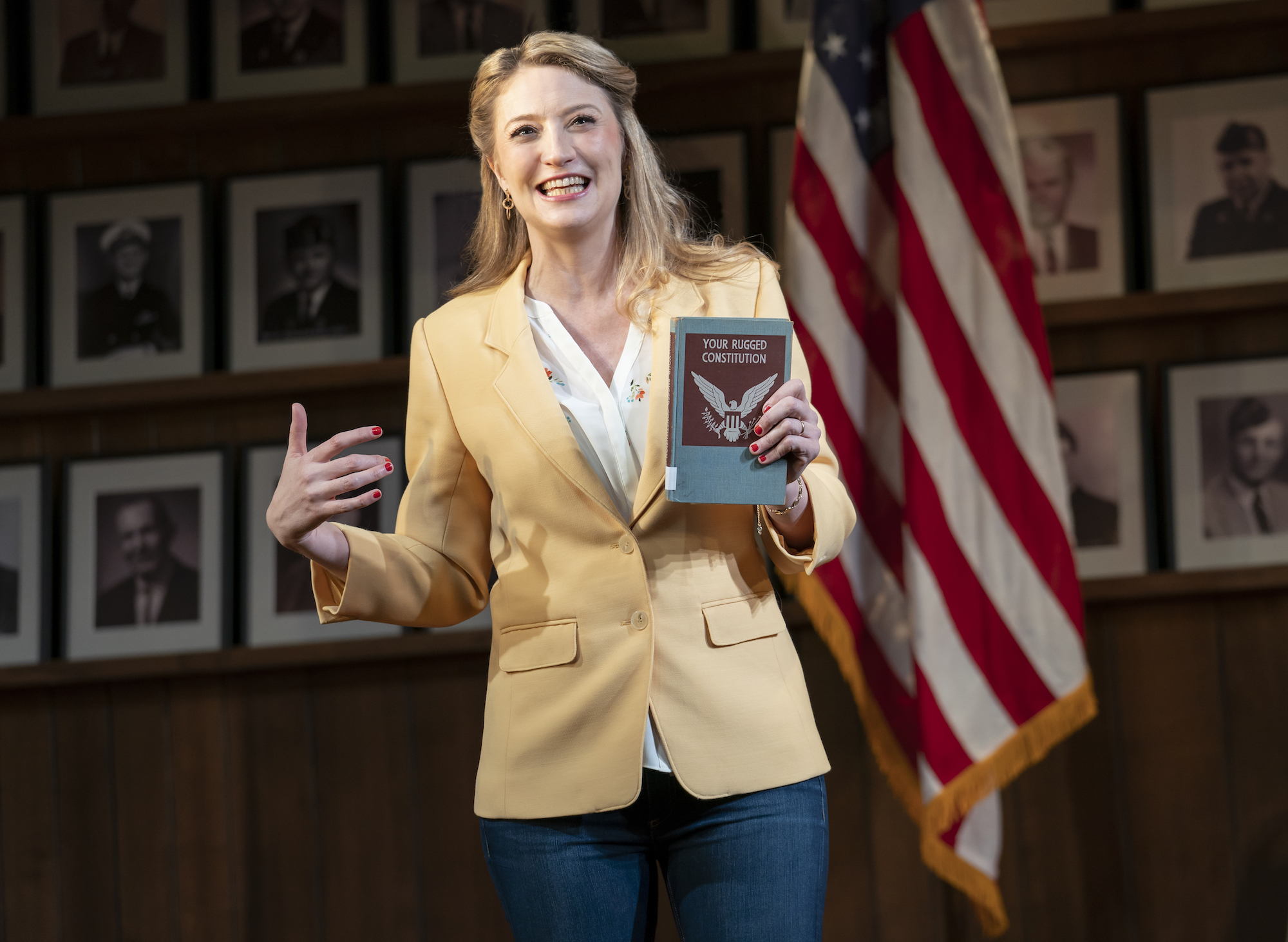 Heidi Schreck in ‘What the Constitution Means to Me’ at Broadway's Helen Hayes Theatre in New York. (Photo by Joan Marcus)

At 15, Wenatchee native Heidi Schreck was making the rounds of local American Legion halls to talk about the U.S. Constitution in oratorical contests. Her goal: to win prize money for her college fund.

Now in her 40s, Schreck (who began her career in Seattle as the co-founder of the experimental fringe troupe Printer’s Devil) is selling out an extended Broadway run of her inventive play, What the Constitution Means to Me, at the Helen Hayes Theatre. She’s nominated for two 2019 Tony Awards (for best actress in a play and best play) and counts esteemed legal scholar Laurence Tribe among her fans.

In a way, she’s circled back to her Wenatchee girlhood. In What the Constitution Means to Me, Schreck explicates, celebrates and critiques a fundamental document of our Republic — pointing out what “negative rights” it bars (things the government will not allow, such as depriving a citizen of free speech) and what “positive rights” are missing (for instance, a woman’s reproductive rights).

Moreover, with charm, wit and brave candor she personalizes it as a “living, warm-blooded, steamy” document that has had a direct impact on the lives of Americans — particularly women with little legal recourse. She shares some searing stories of inequality experienced by some of her female relations: a great-great-grandmother who was a mail-order bride “purchased” for $75; an abused grandmother whose children suffered rape and near-kidnapping at the hands of a violent stepfather. And she deputizes the audience to consider whether the Constitution is cast in stone or needs revision to become more truly democratic.

Several of Schreck’s plays have been produced off-Broadway. She has written for such top-shelf cable series as Billions and Nurse Jackie and has worked as an actor. Her stage director husband, Kip Fagan, also has worked steadily since the couple left Seattle for New York in the early 2000s.

But while unfailingly gracious, Schreck seems a bit stunned by the flood of rave Constitution reviews (from everyone except the scoffing critic for the ultraconservative National Review) and honors (an Obie, a Pulitzer Prize finalist, a Susan Smith Blackburn Prize finalist) coming her way.  “I’m shocked that so many people are responding to the play, that so many people want to see it,” she says. “I’m quite moved by that.”

As the Tony ceremony loomed (it will be telecast on June 9), Schreck took time out to chat by phone. Here are some edited excerpts from that conversation:

How did you start developing the script for What the Constitution Means to Me?

I actually had the idea while I was living in Seattle. Lisa Kron came to town and performed her solo show, 2.5 Minute Ride. I saw that and thought, I’d like to write something about family trauma and about those speech contests I did. At first, I wanted to write a piece where I attached a personal story to every amendment in the constitution. The audience could choose an amendment for me to talk about, and the play would unfold randomly. But that was such a big ambitious idea I let it go.

I revisited the script about 10 years ago, and worked on it off and on. It was very research-heavy, and it took me years to understand and parse and explain the Constitution correctly.

Now there are major questions about the Constitution in relation to Donald Trump’s presidency, the role of Congress, abortion rights. Did you know the show would be so timely today?

I first performed a version of it in the spring of 2016, when Obama was still president. But I didn’t predict we’d be in a constitutional crisis when I wrote it. I knew women’s rights were being chipped away, but then came the full-on crises of reproductive freedom and the #MeToo movement.

You speak very candidly about how the Constitution relates to the lives of women in your family. Was that difficult? How did your relations feel about sharing those painful stories?

We had many very painful conversations about the exact details. She, thank God, was very open and encouraging of me to write about this honestly. I was grateful for that. She’s a lifelong feminist, and she taught me how to be a feminist.

But how does it feel to reflect on those family traumas in public?

Intellectually, I didn’t think it was taboo…. Inherited trauma is a real thing. I also found it difficult to talk about my own abortion at 21. I also realized I had shame and fear about that.

When I first started performing it, I had a visceral reaction. I felt pain, I had knots in my stomach, I cried. It’s much easier now. And I found out that so many people could relate to these things from their own experiences.

What do legal scholars think about the show?  Have many seen it?

Yes! So many! Constitutional scholars are so happy that there’s a play about what they do. I did my due diligence, but I still felt worried that I would be criticized; the holes in my understanding would be exposed. But Laurence Tribe, who was Obama’s mentor and teacher at Harvard, was invited by his granddaughter to see the show and he loved it. He came back twice! We became friends and we’re going to do an appearance together to talk about the Constitution.

At the end of the play, an actual student debater joins you on stage. You flip a coin to choose sides and the two of you debate whether the Constitution should be tossed out or retained and revised. Then you ask the audience to vote on the question. What do they usually choose?

It’s fascinating. The last few weeks, when the anti-abortion laws started getting passed in Alabama and Georgia, people every night were for abolishing [it]. That happened during the hearings for [Supreme Court Justice] Brett Kavanaugh, too. Our theory is that when people feel things aren’t working and the Constitution is not protecting some of us enough, they vote more to abolish, to burn it down. Which, by the way, I don’t think we should do!

Another actor, not yet named, will be doing a national tour of the show. How will that work, given how autobiographical the piece is?

We’re in the process now of figuring out how to do it with another actor, and I’m working with my director, Oliver Butler, on the approach. I think the actor will at some point have to step out and share a personal story in relation to the Constitution. So the play will be tailored to who does it next. For right now, we get to decide where the play goes and who gets to do it.

Hopefully, it will come to Seattle. In retrospect, how do you feel about your time doing theater in Seattle?

I love that question. I loved my life in Seattle. I feel like being part of Printer’s Devil for seven years gave me the best education in theater. We were very lucky to work with an incredibly talented group of people when there were so many extraordinary companies in town  — the Empty Space, the Bathhouse, Annex, Greek Active…. I feel like that time in Seattle taught me how to be an artist.