Plymouth Housing is looking to raise $75M in private donations to put toward the construction of eight new buildings. 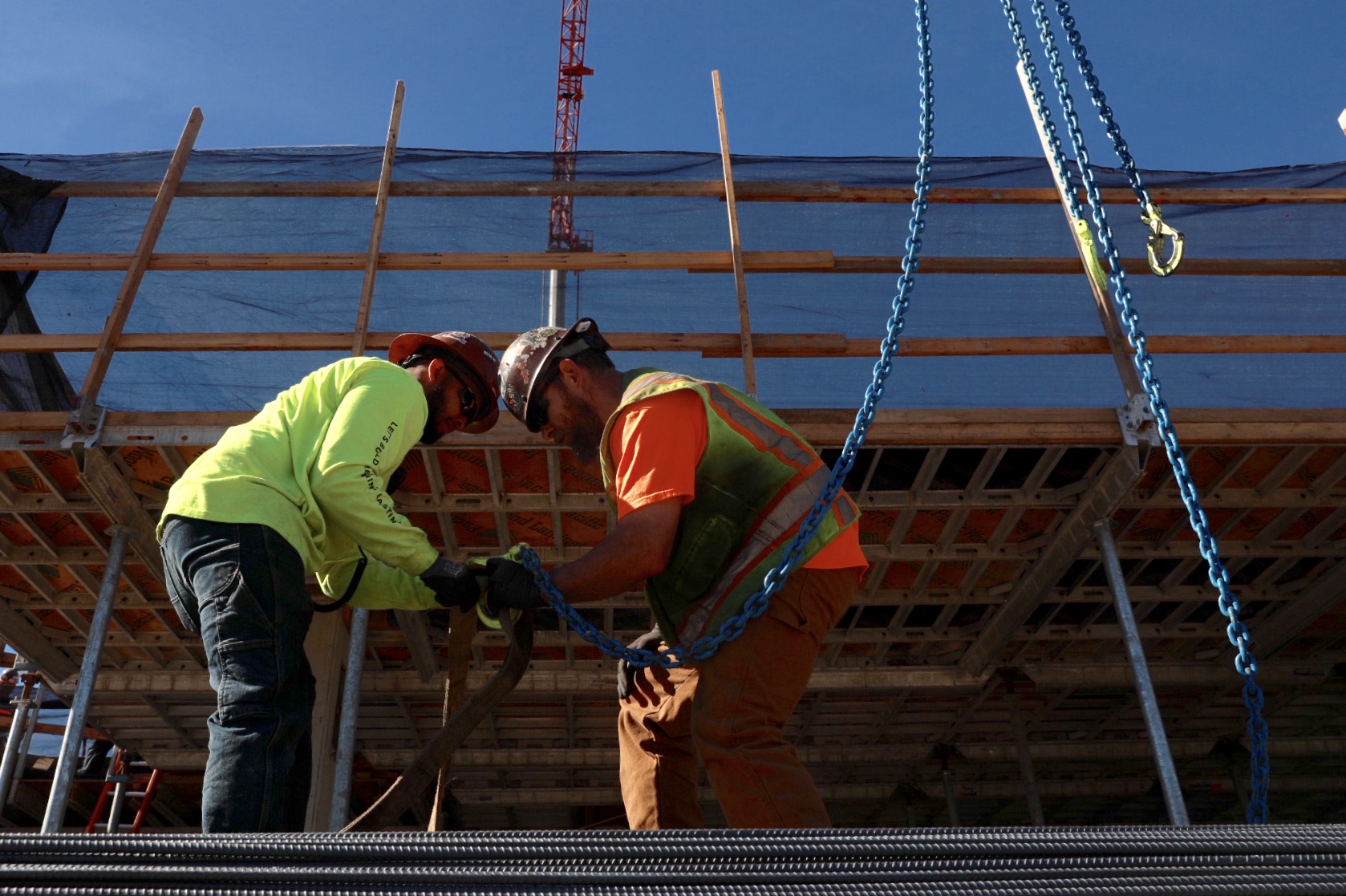 Workers from Farwest Steel prepare to hoist materials at the site of Plymouth Housing’s new development at the intersection of Rainer Ave South and South King Street in Seattle, June 11, 2019. (Photo by Matt M. McKnight/Crosscut)

Plymouth Housing, a Seattle nonprofit that has created and operated supportive housing for homeless adults for nearly 40 years, has raised close to $50 million to expand its portfolio of homes for extremely low-income people. The significant early success of the campaign puts the longtime housing provider within striking distance of an ambitious goal, announced Tuesday, of raising $75 million for new construction through private donations.

Combined with money from the city, county, state and federal governments, the donations will help fund an aggressive timeline to build more housing. Plymouth representatives say they hope to spend $325 million on the construction of eight new buildings in and around Seattle. Five of those are scheduled to open within the next four years, a breakneck pace by housing standards.

The projects will contain about 800 homes among them, mostly for people with extremely low incomes who have struggled to find or maintain other forms of housing.

“The gold standard is to get everybody off the streets,” said Plymouth CEO Paul Lambros. “I mean, it's a lofty goal … and we're just trying to do our part here to make a difference in the lives of the people that we see who have been long-term homeless and are in need.”

Seattle and King County remain under a state of emergency, declared in 2015 in response to the growing homeless population. This year’s annual count showed a dip in the total homeless population for the first time since 2012. But officials were quick to downplay that drop’s significance, pointing to the more than 11,000 people still found to be struggling with homelessness — a number that’s assumed to be a significant undercount.

Locations in Lower Queen Anne, the Chinatown-International District and First Hill have been designated for Plymouth’s first five buildings. One of those, off Rainier Avenue, has already broken ground. Lambros said he and the donors to the campaign are confident Plymouth will find locations for the remaining three, bringing the total to eight new buildings.

One of the buildings will be dedicated to housing homeless veterans. Another, built on a site donated by Sound Transit, will focus on homeless seniors.

But that was just the beginning of the campaign. Early in the process, Plymouth had hoped to raise about $25 million, Lambros said. But those expectations shifted in the wake of the medical providers’ contributions, which Lambros said spurred widespread interest from donors. The committee running the campaign raised the bar to $60 million and then, just in the past several weeks, moved the goal out to $75 million.

“The stars aligned” and the scope of the campaign grew to meet the interest, Lambros said. “This has really gone a lot better in the quiet phase than we ever could have imagined,” he said.

In addition to the three medical institutions, Wyncote Foundation Northwest, Connie and Steve Ballmer, Amazon and Microsoft each contributed an additional $5 million. The Norcliffe Foundation contributed $4 million. Lambros said there’s a sizable list of people who have donated $1 million each. Combined, Plymouth says it has raised $48.8 million.

The contributions come a year after Seattle repealed a tax on high-grossing businesses to fund more housing, which Amazon fought. The tax, which was passed then repealed a month later, would have raised around $45 million a year.

Mayor Jenny Durkan celebrated Plymouth’s effort. “This announcement is yet another example of the big things we can do when everyone comes together to tackle this challenge: philanthropy, employers, and government. To all of those who have stepped up, we have to continue to work together to address this crisis,” Durkan said in a statement.

Plymouth was founded in 1980, in a downtown Seattle church. The organization has evolved over the years, from helping people find homes, to providing services, to renovation, to new construction. Along with the Downtown Emergency Service Center, it’s become one of the largest housing providers in Seattle, currently operating 14 buildings with about 1,100 homes.

Plymouth housing has never raised this much private funding.

In a statement, campaign co-chair Paula Reynolds called it “the largest-scale effort ever undertaken to expand the provision of permanent supportive housing in our region.”

When completed, the new construction will come close to doubling the number of supportive housing units Plymouth already provides — from the 1,100 it owns and operates to 1,900.

Like nearly all of the buildings in Plymouth’s portfolio now, the new homes will serve people earning a maximum of 30 percent of the area’s median income — or as little as nothing. The clients largely fall into the “chronic” category, meaning they’ve been homeless for more than a year and have struggled with a disabling condition, including mental or physical impairments or substance-use disorder. Some have criminal records or other barriers that keep them from maintaining housing elsewhere.

Plymouth subscribes to the “housing first” model, which embraces the idea that issues like mental or behavioral health and substance use can be addressed more effectively when that person is housed first, rather than requiring treatment as a precondition to gaining a place to live.

Unlike emergency shelter or transitional housing, supportive housing does not exist to move people somewhere else. “Success means they're living there permanently. They're not falling back into homelessness,” said Lambros. By this standard, Plymouth claims a success rate of 94 percent.

“We believe that serving the most vulnerable individuals that are experiencing homelessness is what we are here for,” said Kelli Larson, Plymouth’s chief program officer. “They are the folks who are suffering the most. They are the folks who are utilizing the most expensive mainstream systems that are also not always very humane. We’ve proven with multiple studies and years and years of experience that the model of supportive housing that we provide is extremely effective for these individuals.”

Lambros is confident Plymouth can pair the private donations with tax credits from the federal government, as well as funds from the city’s housing levy, the state’s housing trust fund and the county’s veterans, seniors and human services levy.

Plymouth Housing’s efforts to give homes to the most difficult to house align with the city’s aspirations when it comes to homelessness. In her 2016 report to the city, consultant Barbara Poppe recommended that Seattle give priority to those who have been homeless the longest. Not only are they often the most vulnerable, she said, but they also disproportionately occupy shelter space.

People experiencing chronic homelessness also may interact with the criminal justice system often and spend a disproportionate amount of time in hospitals, neither of which are seen as helpful and both of which are expensive.

In the most recent annual count of people struggling with homelessness, All Home King County estimated 2,213 people were experiencing chronic homelessness. That’s a drop from the year before, but providers are skeptical of the reported decrease.

By focusing on that subset, Lambros said, “I think we make a real dent in this issue and hopefully the community will see a noticeable difference.”