The Onion likes Jay Inslee. After the debates, will voters?

The Washington governor and aspiring presidential nominee has a lot of work to do in Wednesday's debate to make his mark in the crowded 2020 race. 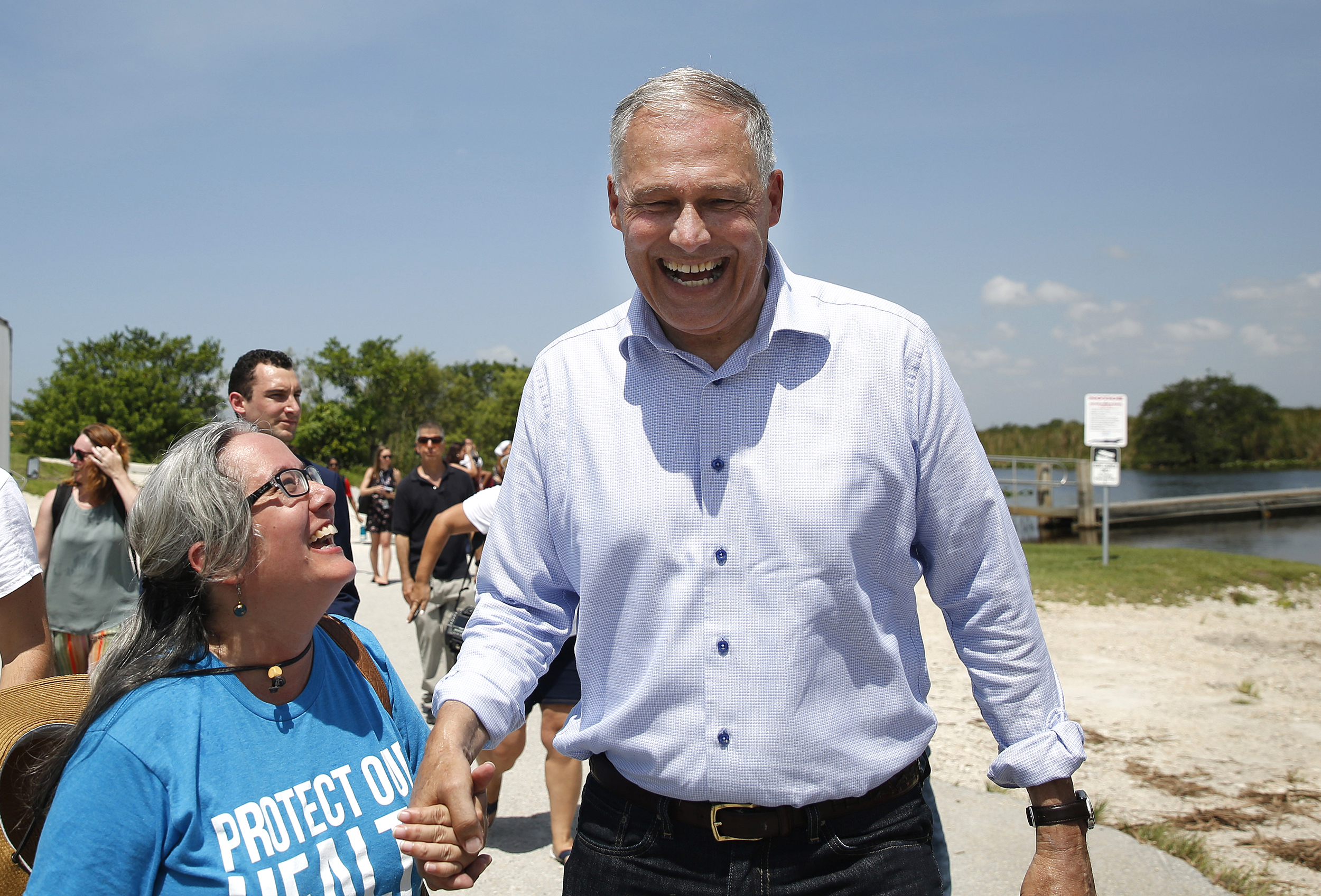 Democratic presidential candidate Washington Gov. Jay Inslee speaks to a supporter after a news conference at the Everglades Holiday Park on June 24, 2019, in Fort Lauderdale, Fla. (Photo by Brynn Anderson/AP)

In the eyes of the nation’s leading satirical news website, Washington Gov. Jay Inslee is an easy — and relatively frequent — target for parody. A self-fashioned one-issue candidate, the Democratic governor has promised to make combating climate change his number-one priority if he becomes president.

On the campaign trail since March, Inslee has pursued this goal with singular focus, releasing wave after wave of detailed plans to transition the United States to a clean-energy economy.

That’s exactly the kind of image Inslee’s campaign wants to project: someone fiercely devoted to saving the planet, who will defy the political establishment to solve what is arguably civilization’s most pressing problem.

Yet despite gaining some national attention and adulation for his climate plans, Inslee has been unable to smash through the wall of public perception to make a serious dent in the polls. He has registered consistently between 0% and 1% in recent surveys of Democratic voters.

He’ll take the debate stage Wednesday night looking to change all of that.

In the first of two back-to-back nights of presidential debates, Inslee is seeking to introduce himself to a national audience in a way he has so far been unable to do through cable news appearances, fundraisers and trips to early primary states.

He’ll be jostling for recognition alongside nine other Democratic candidates also hoping for their own breakout moment.

Twenty candidates qualified for this week’s debates, either by registering at 1% or more in three qualifying polls or by accruing 65,000 individual donations. Inslee met both standards.

Thursday night’s debate will feature a broader range of closely watched candidates, including former Vice President Joe Biden, who is ahead in the polls, as well as Vermont Sen. Bernie Sanders, California Sen. Kamala Harris and South Bend Mayor Pete Buttigieg. Both nights’ debates will air live from 6 to 8 p.m. Pacific time on NBC, MSNBC and Telemundo, and stream free online at NBCNews.com and MSNBC.com.

Aisling Kerins, Inslee’s campaign manager, said Inslee will use his time on the debate stage to plug his record in Washington state, as well as his wide-ranging policy proposals for defeating climate change.

“We know from both polling and just from being out in the field that people like what he has to say, and that his focus on defeating climate change really resonates with the base,” Kerins said during a press phone call last week. “But we also know that not nearly enough people have heard from him yet.”

Among other things, Inslee has proposed moving the nation to carbon-neutral electricity by 2030, while banning sales of new gas-powered cars by the same deadline. A new plan he unveiled Monday proposes to also phase out fracking and end fossil-fuel leases on public lands.

Yet Inslee’s multipart climate plans, as extensive as they are, may not be enough to distinguish him in a field of candidates who say they, too, are committed to halting global warming, said Aseem Prakash, a political science professor and founding director of the University of Washington’s Center for Environmental Politics.

Among Democrats in 2019, taking a stance against climate change “has become normalized,” Prakash said. “Everybody is rushing out their climate plans.”

“Everybody has a sense that climate change cannot be ignored,” he said. “They may have other things — Medicare for All, forgiving student debt — but all of them realize they have to take a position on climate change.”

“If you want the Democratic nomination, you have to do this," he said.

Working in Inslee’s favor: Poll numbers at this point in the game can easily shift — and often do. For instance, polls from June 2015 showed former Florida Gov. Jeb Bush and former Wisconsin Gov. Scott Walker leading the pack of Republican candidates for president. Neither became the Republican nominee in 2016. Instead, Donald Trump overtook them and eventually laid claim to the White House.

In the 2008 campaign, Hillary Clinton was similarly leading Barack Obama in the polls throughout 2007, but ultimately didn’t win the Democratic nomination.

In another example Inslee’s campaign likes to cite, former President Jimmy Carter was polling at about 1% in the first half of 1975, but went on to win the presidential election in 1976.

“The polls at this point probably reflect mostly name recognition or familiarity with the candidates,” said pollster Stuart Elway, whose polling firm conduct's Crosscut's quarterly survey of voters in Washington. “Most Democrats aren’t paying much attention yet.”

With 10 candidates on stage Wednesday night, Inslee won’t get much time to make his pitch. Elway estimated each candidate might get about nine minutes total to speak over the course of the two-hour debate.

“Debates are really just delivery mechanisms for one-liners,” said Margaret O’Mara, a University of Washington history professor who has written a book on presidential elections.

Candidates on such a crowded stage will be competing to get in the biggest zingers that will get them the most attention, she said.

“We may end up with a cacophony of one-liners and people talking past each other,” O’Mara said.

Inslee’s campaign has continually noted that in recent polls, combating climate change has been a top issue for Democratic voters. They believe Inslee can use that to his advantage to make an impression at the debates.

But Mark Alan Smith, a UW political science professor, doesn’t put too much stock in those polls for a key reason: Once candidates start proposing specific policies to tackle the problem, support tends to drop off, he said.

He said for many liberals, climate change serves as an “identity marker” that distinguishes them from conservatives, who may place less emphasis on the issue. Yet it still doesn't necessarily drive the decisions Democratic voters make at the polls, he said.

“People will say, ‘We need to do something,’” Smith said, “but as soon as you start offering specific policy solutions — especially if they come with any pain — that’s a different matter entirely.”

Because of that, Inslee’s success will depend on whether he can turn climate change into “a voting issue,” not just an “identity issue,” Smith said.

David Domke, the chair of the UW Department of Communication, said Inslee doesn’t need to trounce the upper-tier candidates — such as Biden, Sanders, Warren or Harris — in this early stage of debates. For now, he just needs to get ahead of a handful of the other contenders, so he isn’t stuck amid a pack near the bottom of the list — something Domke said he thinks is doable.

“Where I think he is going to continue to struggle is he is fairly vanilla, and I think 'vanilla' works in multiple ways here,” Domke said. “He’s vanilla as a personality, and he’s white. And in this primary, there are an awful lot of white guys.”

By comparison, Domke said, other candidates have a signature issue, but also other characteristics that may make them more distinctive in voters' minds. Cory Booker, for instance, has made his signature issue criminal justice reform, but in addition to that, he also is one of only a few Black men to ever serve in the U.S. Senate, Domke said.

For his part, Inslee is trying to use humor to his advantage. When The Onion wrote its latest piece about him, skewering his recent conflict with the Democratic National Committee over its refusal to hold a debate focused solely on climate change, his campaign swiftly responded. The Onion’s headline was, “DNC Committee Throws Bound Jay Inslee Onto Melting Iceberg Before Pushing Him Out To Sea.”

His team is hoping that, with a little bit of luck on Wednesday, the governor’s campaign will finally start to do the same.

Why The Onion is into Inslee

In recent weeks, The Onion, the nation’s best-known satirical news website, has keyed in on the longshot presidential campaign of Washington Gov. Jay Inslee.

Since early May, The Onion has run three parody news pieces dedicated to Inslee — more than it has produced lately to poke fun at Elizabeth Warren, Beto O'Rourke, Kamala Harris or Joe Biden, all of whom are doing better than Inslee in the polls. And, unlike some of The Onion’s satirical pieces about other candidates, the ones about Inslee portray him in a rather flattering light, as some kind of superhuman defender of the planet.

“Jay Inslee Smashes Through Wall Of Town Hall In Solar-Powered Mech Suit To Announce Climate Change Plan,” one headline from May 8 reads.

“Jay Inslee Recalls Decision To Run For President After 5 Teens From Across Globe Pressed Enchanted Rings Together To Call Him Into Existence,” trumpets another from May 23.

Most recently, The Onion characterized Inslee locked in a life-or-death battle with a villainous caricature of Democratic National Committee Chairman Tom Perez. Inslee has recently clashed with Perez over the DNC’s refusal to hold a debate dedicated solely to discussing climate change.

So what is it about this 68-year-old politician that has so captured the The Onion's attention? We asked Mike Gillis, The Onion’s head writer, to give us a clue — and he kindly obliged. This interview has been condensed for space.

What gives with the Jay Inslee jokes? You’re like, the only person who has noticed him, pretty sure.

I guess that’s one thing — it’s just fun when the stakes are lower to play with the character more. The other thing about Inslee is he is clearly doing a good thing. This is an issue everyone should care about, but he is in this funny position where he is polling at less than 1% percent, despite that emphasis on this important issue.

Is he an easy target?

A single-issue campaign is fun to skewer. … When you have somebody that has made their platform so explicit and so dedicated to a single issue, it’s much easier to peg them down than one of the frontrunners in the primary. It’s almost like they’ve done the work for you in creating a satirical target. …

This idea that he alone can fix things, when there are a lot of other candidates who have very serious propositions for climate change — and incredibly ambitious propositions — makes that idea fun to poke holes in and satirize. … I think there is something funny about the reader feeling the contrast of this relatively milquetoast, benign guy in these crusading poses.

If he was one of the top candidates, would your approach change?

We wouldn’t be alone in doing that — I think the way a lot of news outlets cover him or don’t cover him would probably change pretty significantly if he surged.

I think we definitely would have to more seriously consider the consequences of a Jay Inslee presidency. As great as the idea of being ultrafocused on climate change is and bringing it into this race, that’s not really a consideration right now.