PAC seeks to restore city council to its past...glory? Really?

Today's council may not always do what I want, but at least it listens to people beyond the business community. 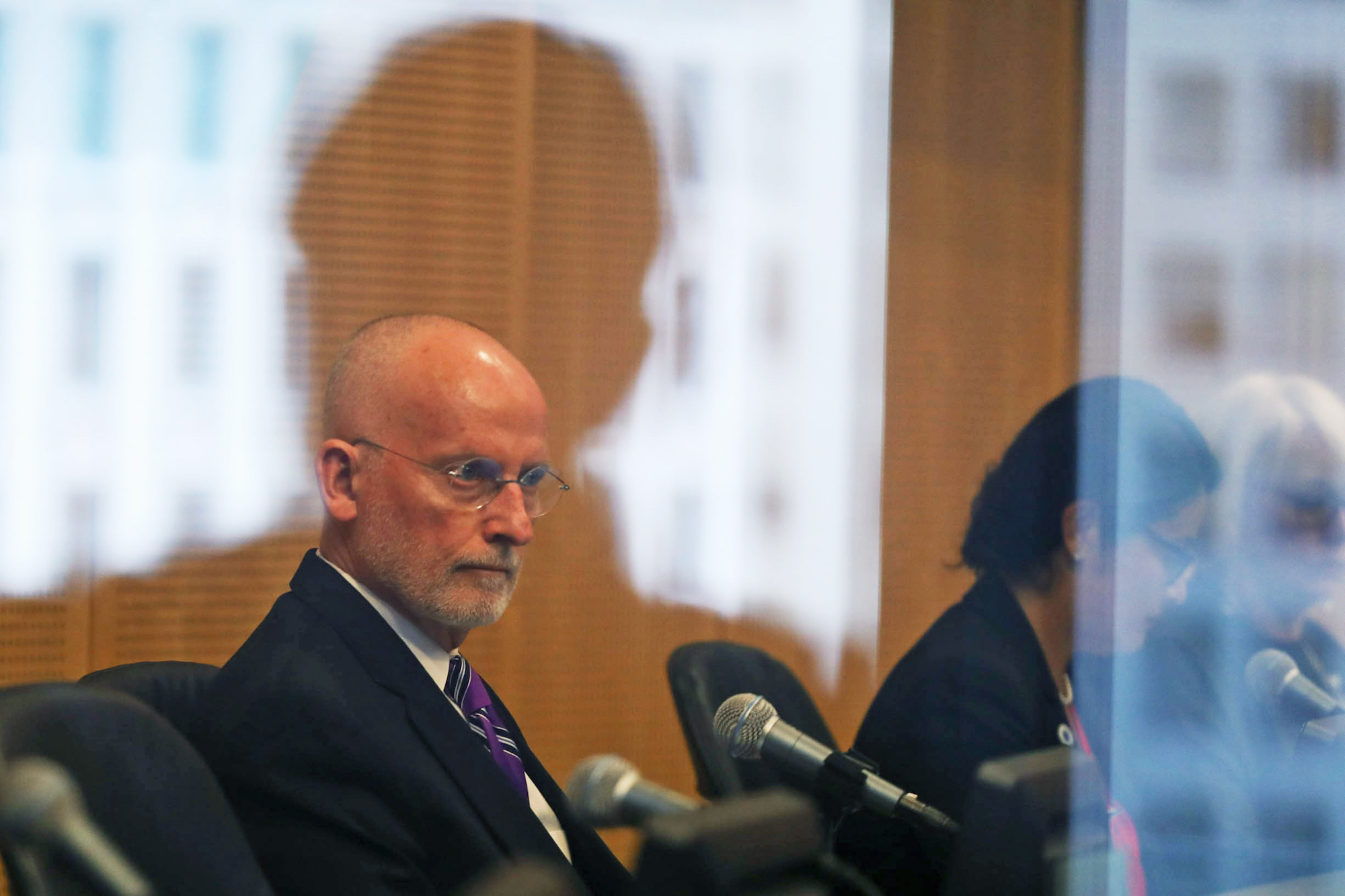 Then-Seattle City Councilmember Tim Burgess during a meeting in the council chambers at City Hall on Sept. 18, 2017. (Photo by Matt M. McKnight/Crosscut)

Former Seattle City Councilmember Tim Burgess has founded a political action committee (PAC) to support more moderate candidates. This raises some immediate questions: What does “moderate” mean, and who gets to define it; more moderate than whom/what; what’s the history of “moderate” politics and when has it proven successful?

In a recent Crosscut article, PAC member Taylor Hoang is quoted as saying the committee’s purpose is “to help support city council candidates that will restore good governance, accountability and transparency to the city council.” There’s no clarification in the article about what those terms mean to Hoang.

What, exactly, is the good governance they want to restore? Governance, in and of itself, is a neutral term, simply describing the processes by which a governing body does its work. What makes it good, bad or indifferent lies in the eye of the beholder. A Google search of the term “good governance” produces 256 million results. Many point back to a set of eight principles articulated by the United Nations: rule of law, transparency, responsiveness, consensus oriented, equity and inclusiveness, effectiveness and efficiency, accountability and participation.

After reading the U.N.’s standards, it’s difficult to imagine a time before the present when the Seattle City Council has consistently exhibited those attributes.

Ask residents in Lake City, Rainier Valley and other neighborhoods whether they feel prior councils have been responsive to their decades of pleading for sidewalks. Was anyone on the council listening when the residents of the Cascade neighborhood were begging for intervention as their rents were spiraling upward and surrounding small cottages were being replaced by medical research facilities and Amazonia? Where was the responsive council when Seattle-based Washington Mutual (WaMu) went under and tens of thousands of homeowners were undercut by the surge in their adjustable rate mortgages? Where was the accountable council’s commitment to the rule of law when taxpaying homeowners were forced from their houses through questionable foreclosure proceedings?

Where was the transparent council during negotiations to rebuild Highway 99 through downtown? Where was the equitable and inclusive council when police were using disproportionate force on communities of color? In fact, the council’s oversight and accountability over the police department was so lacking that the federal courts had to step in with a consent decree. Where was the effective and efficient council as the City Attorney’s Office wasted tens of thousands of dollars on a series of lawsuits against longtime, dedicated, effective employees?

Which Seattle City Council told Amazon, Google, Expedia, Adobe, and other tech companies, “Sure, we’ll make development and a massive building boom easy, provided you hire only from the local pool of professionals for the first X number of years and, after that, pledge X% of your gross income to our schools”? Oh, right —  that never happened.

In 2015, however, the council demanded that employers in our town compensate employees a respectable wage. This required a pivot in their collective stance. Rather than giving in to the fearmongering about a $15 per hour minimum wage spurred by, among others, one of the most successful restaurateurs in our region, maybe our country, they listened to the everyday residents who were asking for intervention, and their constituents, who were willing to pay a bit more to ensure the economic security of our neighbors. And guess what? Tom Douglas still has enough money to operate 16 restaurants.

There are complaints that Kshama Sawant is inaccessible. Perhaps she is simply too busy listening to those who have been left out of decades of prior council conversations and decisions, people whose nuanced priorities have been ignored and were, in the past, “allowed” to have one designated “spokesperson” who merely echoed the entitlement and privilege of the dominant business culture.

There are complaints that Mike O’Brien doesn’t listen to his constituents. Maybe he has simply broadened the scope of his hearing beyond the threatening, loud whisperers who have dominated the past century of Seattle’s history.

Or maybe O’Brien looked at the history of outcomes produced by prior councils and decided to go for something different: policies that don’t increase homelessness and force longtime residents out of the city, policies that preserve for the long term rather than satisfy for the short.

I don’t agree with all of the current council’s decisions, but I know the $15 minimum wage stabilized many people’s lives. If someone needs employees to make their business work, they need to ensure those employees make enough money to survive, at the least, before adding vacation homes, yachts, spaceships and mistresses/gigolos to their expense list.

For generations, it seems, Seattle’s city council acted from the belief that growth is good and business is the sole driver of a robust economy. There comes a point when all growth stops being good growth. The steep rise in the number of people without homes, the wage and income disparities, the deficiency in public education outcomes, the reduction in housing affordability for tens of thousands of people are outcomes of business-centered policies. They have made some people very financially successful, but the rest of us live here, too, and have the right to active voices advocating for “good governance” on our behalf.

Where are the examples of moderation in the midst of blatant, often violent, oppression bringing about a more just society? I know of none.

All significant change requires the courage to pursue a new vision and let go of the old. If moderate means more of the policies of the past, no thank you. If it means supporting one segment of society while the rest suffer, no thanks. If it means putting the future into the hands of those who created the present, I’ll pass. If moderation means only moving forward when the comfortable give their approval, I follow Dr. Martin Luther King Jr.’s lead in his Letter from Birmingham Jail in saying, “’Wait’ has almost always meant, ‘Never.’”

My support goes to candidates seeing beyond what’s probable and actively creating what’s possible: a society where everyone has ready access to the tools to develop into their best selves. Everyone.