Amada Cruz of the Phoenix Art Museum will take the reins in September. 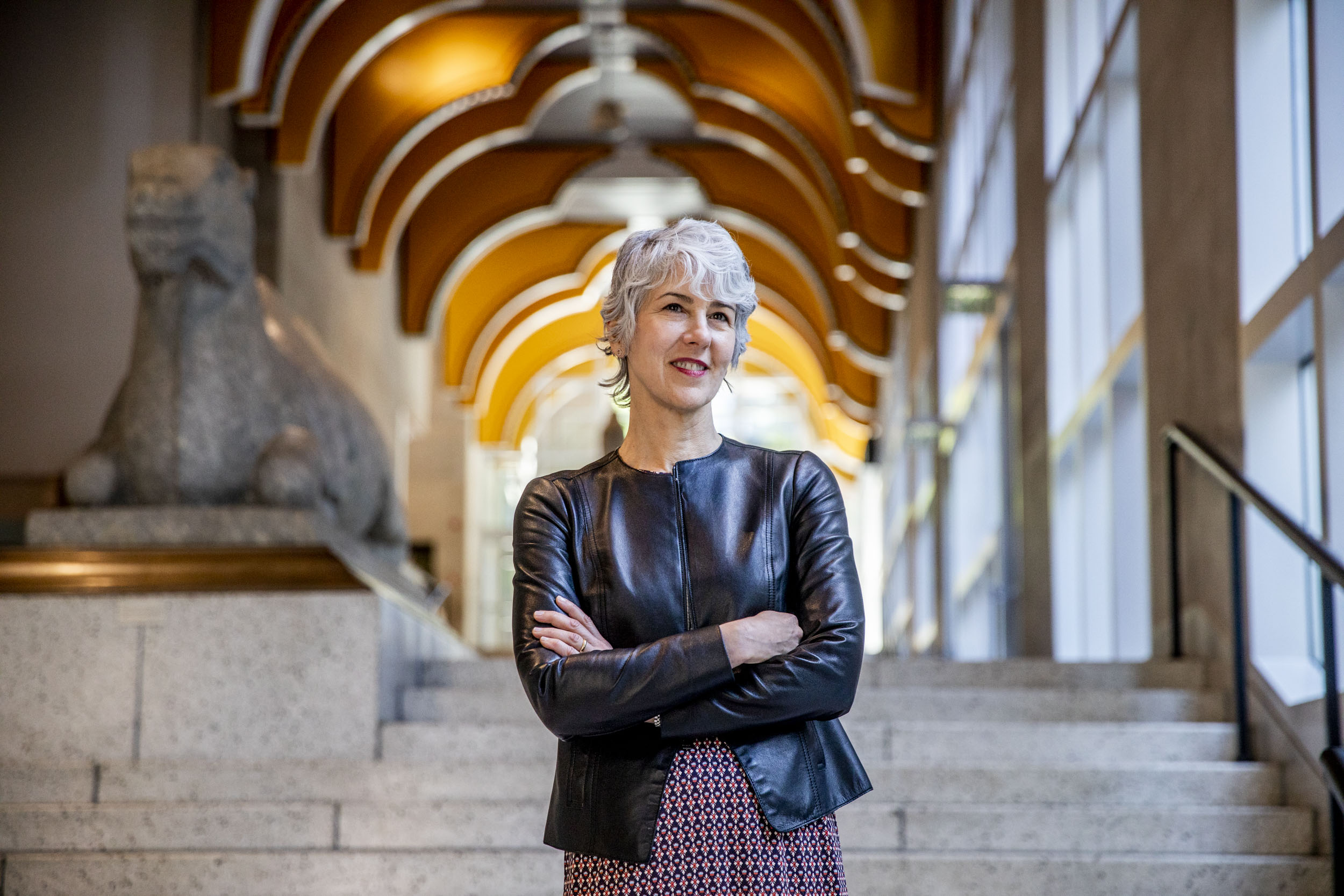 Amada Cruz first visited Seattle in 2007, as part of what she calls the “art world congregation” that descended upon the city to celebrate the opening of Seattle Art Museum’s grand new building. Today, the petite, leather-jacketed Cruz sits in that same building — this time as the newly announced executive director and CEO of the organization.

Cruz, who has been director and CEO of the Phoenix Art Museum (PAM) in Arizona since 2015, succeeds Kimerly Rorschach, who has led SAM and its 300 staffers since 2012 and will retire in the fall. The leap from PAM to SAM means Cruz will move into an organization with more than twice the revenue of her previous nonprofit (SAM clocked $27.8 million last year), and three times the number of venues, with the Olympic Sculpture Park, Seattle Asian Art Museum and the downtown museum.

That first visit to SAM, Cruz says, is when she first got to know the museum’s collections, “which are amazing.” Her next visit to Seattle gave her a sense of the rich depth of art making in the city. She came to commemorate the unveiling of a new graphic novel by celebrated Vashon-based comics artist Jim Woodring (whom her organization at the time, United States Artists, had awarded a prestigious grant). “I got to see Fantagraphics — that was so much fun,” she recalls.

Born in Havana, Cuba, Cruz attended New York University, where she earned her degree in art history and political science. Previous to heading PAM, she held director positions at Artpace in San Antonio; Artadia: The Fund for Art and Dialogue in New York City; and at United States Artists in Los Angeles. In 2015, she was named one of 11 “most powerful female museum directors” in America by W magazine.

But her term at PAM has not been without controversy. Though Cruz led the museum to retire a $4 million line of credit, while increasing its endowment, membership and attendance, she was also beset with personnel issues, including the departure of a dozen staff members and some 100 volunteer docents. Nonetheless, Charles Wright, SAM trustee and chair of the search committee, said in a press release, “Amada’s strong vision, extensive experience as both a curator and a fundraiser, and keen understanding of the power of the visual arts will undoubtedly help her take SAM to the next level.”

While Cruz is just getting to know her new city, she spoke with Crosscut about her plans for SAM, a favorite current exhibit at SAM, and her feeling about moving from Phoenix’s “dry heat” to Seattle’s “wet rain.”

One of the questions Seattle museums and other art institutions are struggling with is how to get the burgeoning tech population into art spaces. Any ideas?

It’s a conversation a lot of museums are having. I don’t have the answer, but we all hope that because that sector is so much about innovation — which means they’re about creativity — that museums and art will matter to them, and eventually we’ll get that crowd in here.

Are “blockbuster shows” a way to get people in the door at SAM?

I think we’re post-blockbuster era. Blockbusters are extremely expensive, and if you are not confident that you can make back that money, it can really be a drain on your budget. And I just don’t know if people want to come into packed galleries, where you can barely see the work. If you look at famous photographs of the Louvre, with everybody going to see the Mona Lisa — I don’t think that’s what people want these days. ….  I mean, I’m not against really popular shows! Seeing those long lines of people waiting to get in, I’m all for it. But I don’t think it necessitates an exhibition that costs so much money.

At PAM, you were known for diversifying the exhibitions to better match the demographics of Phoenix, instigating bilingual programming and descriptors, and offering museum tours in Spanish. Any sense of how that might work at SAM?

In Phoenix, it was a no-brainer, with 41% Latino population and also the fact that Mexico is the country from which we had the most tourists. We diversified the curatorial staff, too — the chief curator is now Mexican American. And that made all the difference. But that was a very specific scenario. Will we need some multilingual signage at the Asian Art Museum? That’s something we’ll explore.

You’ll be taking the reins just before the grand reopening of the Seattle Asian Art Museum, in the fall of 2019. Thoughts about how the newly remodeled building will reflect a fresh approach?

Well, it depends on what makes sense for Seattle. What do people here want to see? What are the opportunities? I’m told a lot of the contemporary Asian art exhibits have been very popular here, and that makes sense, so that’s obviously an area to explore. You have to find a way to make historical collections relevant — find a way to update these older forms — and sometimes a contemporary artist is the way to do that, especially for younger audiences.

You’ve said art museums need to balance local and global interests. What do you mean by that?

My question is what does it mean to be the Seattle Art Museum. The city is in the name. What is the culture of Seattle? I don't think museums have to be the same across the country. You need to look at your city in context, and have local relevance. So what have the popular exhibitions been, what’s popular in the permanent collection? But you also have to balance that with national visibility because you certainly want to have some impact. Exhibitions and catalogs can help raise the visibility of the institution as a whole, help highlight the scholarship of your curators, and also frankly it helps you get national grants. So it’s a balance.

Is there an exhibit at SAM you think hits both of those marks?

I love the piece in the lobby by John Grade [the suspended tree replica, Middle Fork]. I think of Seattle and timber and trees, and it makes perfect sense here. But it’s also such a strong piece, you could send it anywhere around the country and it would really resonate with people.

What else is on view at SAM that you really love?

Lessons from the Institute of Empathy [by Saya Woolfalk, who created three “empathic” figures and imagines them curating an exhibit using elements from SAM’s African Art collection as instances of empathy]. It’s fascinating because there’s a lot of mystery to that show. It confounds all these traditions of museum exhibition. You don’t really know what the authorship really is. You don’t know if the objects on view are authentic or inventions, plus this crazy digital projection, which is completely hypnotic. Yesterday the gallery was full of young tech dudes who just plopped themselves down on the floor, mesmerized by these projections. It was so interesting to observe — the multimedia thing really speaks to a certain generation. And it’s really hard to do an exhibition that combines, in one space, digital technology, projections, a woman lecturing on video, and sculptural elements — that’s a lot of information to take in, but somehow it works. You could spend so much time there. You’re watching it, you're questioning it, you’re enjoying it all at once.

Any concerns about the change in climate from Phoenix to Seattle?

I’m not worried. I got here on Saturday and my husband and I spent the entire day outdoors, and I just thought, “Oh, my God, they did this to seal the deal.” It was so extraordinary. I used to live in Chicago, and it was the same thing. When the weather finally breaks, everybody goes outside, goes to the lake — it’s just a wonderful celebration. We were at the Olympic Sculpture Park, which is such a generous gift to the city. Most sculpture parks are more protected. I don’t think there’s any other park like it in the country that is so publicly accessible, and the level of the work is so good, and people were just out there enjoying themselves. And it smelled like the sea! I’ve spent most of my life living near bodies of water, so I’m looking forward to being back by the sea.