To save students from opioid overdoses, WA schools will soon carry Narcan

Naloxone, known commercially as Narcan, will be required in many high schools. The goal: To save students' lives if they overdose on heroin or other opioids. 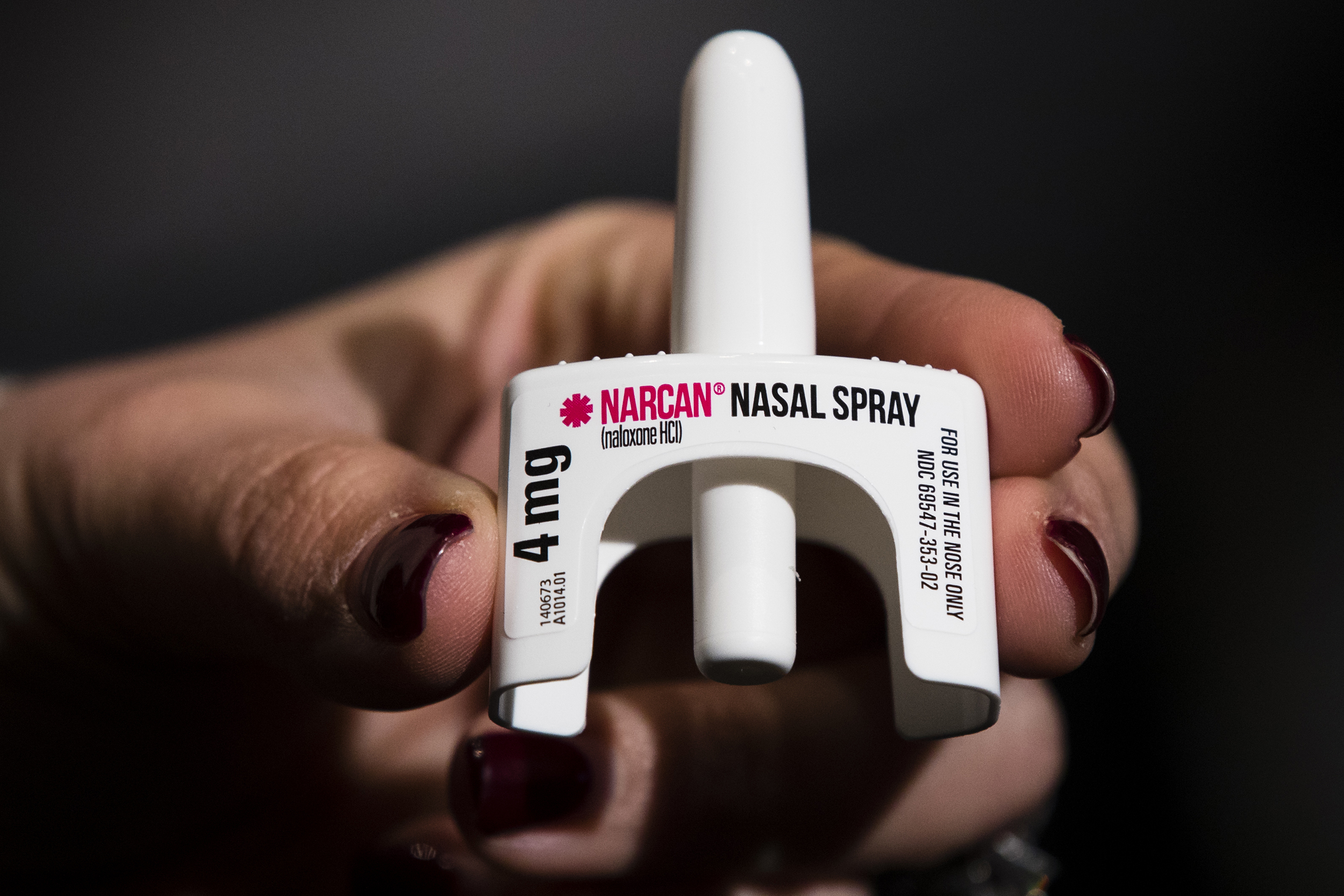 The overdose-reversal drug Narcan is displayed during training for employees of the Public Health Management Corp., Dec. 4, 2018, in Philadelphia. (Photo by Matt Rourke/AP)

The new requirement was approved this year as part of a larger opioid treatment bill signed into law by Gov. Jay Inslee. Based on current enrollment figures, slightly more than one-third of the state’s 295 school districts will be subject to the new rule, which will take effect in the 2020-21 school year.

State Rep. Gerry Pollet, D-Seattle, said Washington state doesn’t specifically track opioid overdoses that occur at public schools. But state officials know students are abusing prescription drugs, as well as heroin, and the officials want to be prepared for the worst, he said.

A recent Yale study found that fatal opioid overdoses among children and adolescents increased nearly threefold in the United States between 1999 and 2016, killing about 9,000 children and teens over that time span. Last year in Washington state, 7% of 10th and 12th graders reported misusing prescription drugs, while 3% reported having used heroin, according to the state’s Healthy Youth Survey.

Under Senate Bill 5380, schools in districts with fewer than 2,000 students also will be able to keep the overdose-reversal medication on hand to use in emergency situations. That’s a change from in the past, when the law governing the use of the drug in schools was more restrictive. Previously, most school personnel would have needed written permission from a parent, as well as a doctor’s prescription, to give a student a dose of the potentially life-saving drug.

The company that produces Narcan, Adapt Pharma, already has offered up free doses of the opioid-reversal medication to Washington high schools, according to a copy of an email provided to Crosscut. The company offers free doses of its Narcan nasal spray to schools and colleges nationwide, a spokesperson said.

Yet in past years, when local parent Corina Pfeil had looked into getting free supplies of Narcan in Washington schools, she hit a roadblock because of limitations of the state’s law, she said.

Pfeil, who lives in Kenmore, said she realized while touring her son’s high school in 2016 that if a student overdosed on campus, school officials may not be ready to respond. For Narcan to be effective in the event of an overdose, it must be administered quickly, increasing the importance of having doses available on site.

“It’s a larger issue than you think it would be,” said Pfeil, who originally suggested the idea for the bill to Pollet. “It’s really easy for student youth to be prescribed opioid medication for injuries and for surgeries … then share things in school, or get things from each other’s friends.”

Thurston County Sheriff John Snaza was one of the people who testified in support of the measure this year in Olympia. At a public hearing in March, he said that in the three years since his deputies began carrying naloxone, they have used the medication to save the lives of 10 people.

Snaza said having naloxone handy has become increasingly important in light of how often drugs are now being laced with fentanyl, a powerful synthetic opioid linked to increased risk of fatal overdoses. Meanwhile, training people how to properly administer the drug takes only about an hour and a half, Snaza said. A two-dose package of Narcan nasal spray costs $75.

“The sheriff spoke in support of the bill because having it in schools increases the chances of saving lives, just as we have experienced in the community,” said Lt. Tim Rudloff of the Thurston County Sheriff’s Office. “The cost vs. benefit is worth it because of the lives saved.”

Also under the new law, public colleges and universities must develop a plan to keep naloxone in residence halls, if they have dorms that house more than 100 students.

Additionally, the state Office of the Superintendent of Public Instruction, which testified in support of the bill, is directed to develop guidelines and training requirements for responding to opioid overdoses at schools. The agency also is supposed to help create a grant program to help schools afford the medication, if for some reason they can’t get it from the manufacturer.

During the legislative session, some lawmakers expressed concern about creating a new burden on school districts. Those concerns were compounded by the lack of reliable data on the number of overdoses that have occurred on school grounds, said state Rep. Brandon Vick, R-Vancouver.

“We have heard from schools we keep putting unfunded mandates on them — and this is another one, but a small one,” said Vick, who voted against the original version of the bill when it came through the House.

The final language states that school districts that attempt to obtain naloxone for free from the manufacturer and fail to do so won't be held at fault, as long as they can show they made a good-faith effort to get the medication. Once schools submit the necessary paperwork to enroll in the free program, they typically receive supplies of Narcan in two days, a spokesperson for Adapt Pharma said.

Other parts of the new law deal with improving opioid treatment around the state. At one point, the measure appeared as if it might not pass, mainly because of a controversial amendment aimed at blocking a safe injection site in Seattle.

Ultimately, lawmakers reached a compromise that stripped the safe-injection site language from the bill, sending it to Inslee's desk to become law.