Parts of the new legislation face opposition from the ACLU of Washington and hotel industry groups. 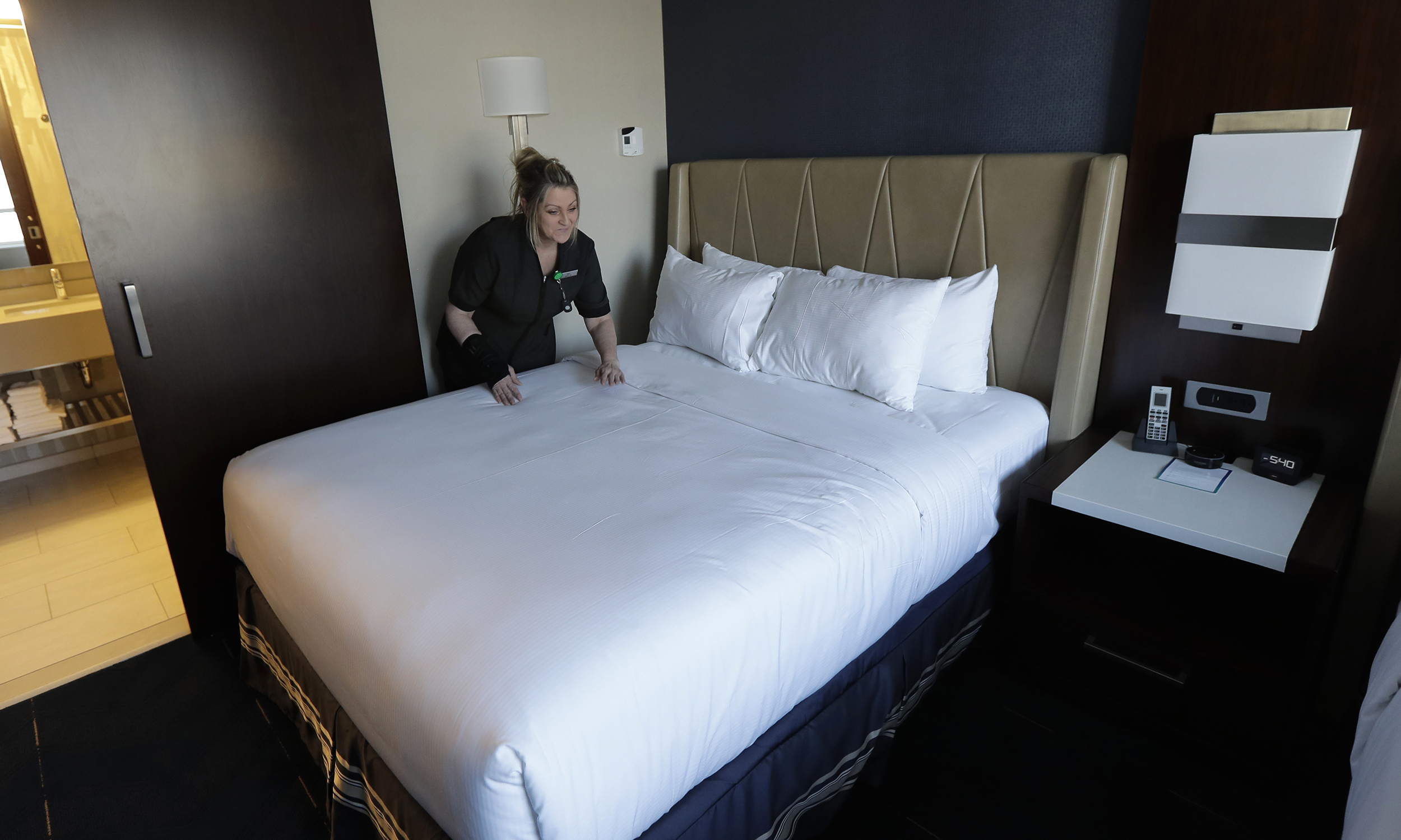 In this Sept. 5, 2018, photo, Rani Accettola, a housekeeper at the Embassy Suites by Hilton hotel in Seattle's Pioneer Square neighborhood, demonstrates how she smoothes the sheets on a bed. Accettola is wearing a device that lets her push a button and summon help if she is in a threatening situation while working. (Ted S. Warren/AP)

Since Seattle voters overwhelmingly approved it in 2016, an initiative intended to provide protections to employees in large hotels has been hung up in the courts.

Loath to wait any longer for the suite of changes to kick in, the Seattle City Council introduced legislation this week to replicate the goals of Initiative 124, but with some tweaks intended to make its provisions more legally tenable and to avoid the quagmire of the ongoing court proceedings.

The legislation is not in the clear, however. Despite widespread public support for the protections, the hotel operators and associations have raised concerns about certain aspects of the proposed law. And the ACLU of Washington, which supports most of it, has come out strongly against the requirement that hotels track guests accused of serious sexual assault or harassment.

Still, co-sponsors of the legislation, Councilmembers Lorena González and Teresa Mosqueda, said they were optimistic any concerns could be addressed in the weeks before the measure’s final approval.

“What we’re doing is we’re saying, in the meantime, we’re not going to delay; we’re going to implement policies to protect workers,” said Mosqueda.

The original initiative was largely defined by the requirement that large hotels provide employees with so-called panic buttons. Housekeepers, in particular, often work alone in rooms with doors that lock, and the buttons were intended as a way to call for help in the case of emergency.

But the initiative went much further. It placed limits on the amount of space housekeepers were required to clean on a given shift; it required hotels to provide health care or in-lieu cash; it required new hotel ownership to give hiring priority to staff under previous management; and, perhaps most controversial, it said hotels must keep a list of guests accused of assault or harassment.

The fact that the initiative contained so many pieces is what landed it in court. Last December, the Court of Appeals of Washington ruled the initiative violated the single-subject rule governing initiatives by “logrolling” all the measures together. The Washington State Supreme Court agreed to hear the case this September.

The initiative was also challenged by the ERISA Industry Committee, a Washington, D.C., group that advocates on behalf of large companies’ health benefits, which said it illegally regulated private employers’ health care plans. That case also is still outstanding.

Rather than wait on the courts, the council elected to take the legislative route. In an attempt to avoid the single-subject violation, González and Mosqueda introduced four separate bills, each addressing a different piece of the larger initiative package.

There are several differences from the original initiative. On health care, the new legislation requires the hotels to make either direct payments to the employees or to a third party for the purpose of purchasing health care, rather than buying a plan — an effort to avoid regulating company health care plans and, therefore, sidestepping one of the ongoing legal challenges.

The legislation also provides more opportunities for guests who are flagged for accusations of sexual harassment or assault to appeal.

Yan Deng, a housekeeper for the downtown Hilton, said the collective impact of the legislation will be a safer place to work. The work is hard, she said. Her time spent cleaning rooms left her with back and wrist issues that still persist, even after she moved to the lobby. “Mostly people have shoulder pain and back pain,” she said. “That’s a lot of pain in the body.”

Deng became emotional in an interview, thinking about a housekeeper she knew who collapsed and died while cleaning a bathroom. Had she had a button, Deng said, maybe she could have been saved.

“Many of these workers only speak one language and it’s not English,” said Councilmember González. “They don’t have a clear understanding of what their rights are in a workplace, in a workplace where they’re asked to go into a room where the door locks behind them.”

However, Jacques Coe, with the Washington Hospitality Association, said, “We’re concerned that they’re overreaching and pushing legislation through.”

Coe said WHA has supported requiring panic buttons, pointing to legislation signed by Gov. Jay Inslee last legislative session requiring them statewide. But the organization’s members are concerned about the cost of the cash payments for health care. They’re also concerned that the regulations extend to “ancillary” businesses doing work for the hotel.

“We think the council should slow down and we’d like to continue working with the council on solutions,” she said.

Additionally, the ACLU of Washington — which supports the protections generally — sent council members a strongly worded letter this week, expressing concern about hotels keeping lists of accused guests. In its letter, the organization warned the lists could be legally dubious. More generally, the chapter compared them to McCarthyism and 9/11 no-fly lists. It also argued that they could lead to disproportionate enforcement.

“Anyone who’s read the newspaper lately knows that people of color are disproportionately targeted for law enforcement activities,” Emily Chiang, ACLU of Washington legal director, said in an interview. “And the idea that we should just try it out and see what happens and maybe it’ll be overblown is a scary one.”

Councilmember González said she nevertheless felt the flagging of accused guests was key. “I obviously don’t agree with the characterization by the ACLU at this point, but I think there’s obviously an opportunity for us to continue to have conversations with them,” she said.

The council’s goal is to vote on the new measures this summer.