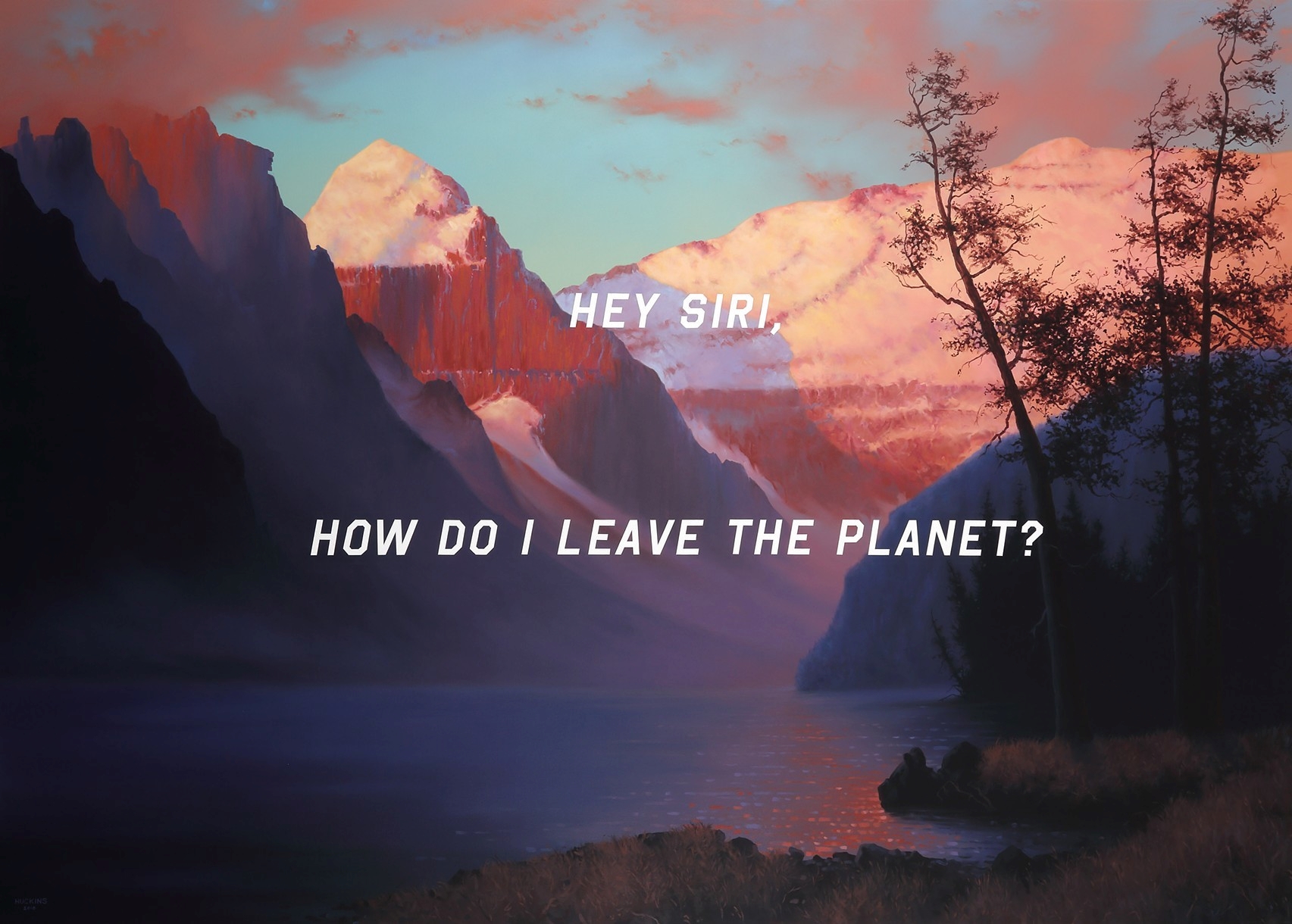 “Evening Glow at Lake Louise: Hey Siri, How Do I Leave the Planet” by Shawn Huckins. (Courtesy of Foster White Gallery)

Shawn Huckins: Staring at the Sun

At first glance, Shawn Huckins’ work looks like a clever meme: classical oil paintings of landscapes and historical figures either overlaid with flippant social media text, or partially “erased” as if by a photo-editing software. In his new show Staring at the Sun, a portrait of George Washington is inscribed with “u tried.” A golden-hour vista of Lake Louise is marked with block letters reading, “HEY SIRI, HOW DO I LEAVE THE PLANET?” But when you step closer it becomes immediately clear that Huckins has painstakingly — and with stunning accuracy  — copied each of the masterpieces before adding his contemporary riffs. Since the 2016 election, Huckins says, his work has turned more political. In a recent interview with Juxtapose, he notes, “Staring at the Sun is a metaphor for how people can follow someone so blindly, on both sides of the political spectrum, that they fail to see common ground.” Touché. But judging by the many people taking delighted selfies in front of his work at last week’s art walk, he may have earned himself a devoted following as well. –B.D.

If you go: Foster White Gallery, through June 22. (Free)

The time has come to bid a fond farewell to Seattle Symphony Orchestra music director Ludovic “Ludo” Morlot. After eight years of innovative programming, five Grammy Awards and a commission that won a Pulitzer Prize, the esteemed maestro is hoisting his baton over his shoulder and setting off for musical scores unknown. Well, maybe not exactly, but in an unusual move for a conductor of his caliber, Morlot isn’t heading directly to another orchestra. Instead he’ll take on a series of guest appearances and special projects. And he promises to drop back in on SSO — guaranteed, as he just has been named Judith Fong Conductor Emeritus, a newly created lifetime title, awarded for his many accomplishments. Say goodbye by way of applause at his last two concerts, for which he has chosen programs featuring Wagner, Strauss, Debussy and Janáček (June 20, 22-23). Bon voyage, Ludo! –B.D.

Fishes of the Salish Sea

One fish, two fish, red fish, blue fish — oh, what Dr. Seuss might’ve done with the encyclopedic new book Fishes of the Salish Sea, a three-volume, illustrated guide and history of the 260 species swimming in the waters off Washington and B.C. (One fish is a jawless hagfish, one fish is a bit-of-a-nag fish …). This definitive compendium from University of Washington Press took decades of scholarship by UW-affiliated biologists Theodore W. Pietsch and James Wilder Orr. But it’s not all strictly ichthyology. The book is a work of art, thanks to gorgeous full-color illustrations by “America’s leading fish artist” Joe Tomelleri (whose skill confirms that fishy superlative). Celebrate the publication — and the 260 fishes surviving our ever-warming waters — at Arundel Books in Pioneer Square, where you can meet the authors and see an exhibit of prints from the book. In the face of dire oceanic news, here’s something auspicious for the fishes. –B.D.

They say writing about music is like dancing about architecture, which means dancing about the environment is … worth a shot? Seattle choreographer Karin Stevens has been researching the countless water concerns related to climate change (diminishing salmon, pollution, diminishing orcas, ice caps melting), and thinking about how deeply our bodies of water are connected to our watery bodies. As part of her ongoing exploration, she’s leading the Seattle contingent of a worldwide project called Global Water Dances — an effort to keep earthlings connected and engaged in our shared need to save the planet. On the same day, in 170 locations (Hawaii, Guatemala, Nova Scotia, South Africa, Philippines ...), dance groups will lead the public through the same simple movement phrase (which you can learn quickly here). In Seattle, anyone can join in at South Lake Union Park. Or just watch, and imagine the many other humans joined in thought and movement all over the world. –B.D

The AIDS Memorial Pathway, in development for the Capitol Hill Light Rail Station, won’t be completed until 2020, but several temporary installations and performances will soon appear at the construction site — just in time for the Capitol Hill Queer Art Walk (June 13, starting at 6 p.m). Three new works will enliven the fences surrounding the project: Gabriel Stromberg’s geometric piece, which transforms a pink triangle into a circle of connection; Timothy White Eagle’s homage to loved ones lost to AIDS, featuring faces painted in soluble charcoal that will slowly fade away; and Pete Rush’s patchwork quilt made of condom wrappers. Also on deck are a series of dance performances curated by David Rue, including students from Spectrum Dance Theatre (June 21, 5:30 p.m. in the Capitol Hill Light Rail Station), and a live performance of new music by Clyde Petersen (June 22, 6 p.m. on the lawn at Cal Anderson Park), including songs about hustlers, forbidden love and the lasting impact of AIDS. –B.D

​The Seattle Jazz Repertory Orchestra pays homage to a musical giant who cut his first record during a two-year stint living in Seattle: singer, songwriter and piano man Ray Charles. With special guests Joe Doria (on Hammond B-3 organ) and Reggie Goings (on vocals), SJRO will wander through the catalog of R&B, blues, country and pop tunes that “Brother Ray” put his own inimitable stamp on in a chart-topping career that spanned more than 50 years. Expect the orchestra to dive into Charles hits like “One Mint Julep” and “I Can’t Stop Loving You.” –M.B.

Local rapper Jacob Gabriel Allen, who goes by JAGA (which he says has nothing to do with MAGA), gives off a vibe that's something like a relaxed Post Malone. After a stint with Seattle hip-hop/electronic/jazz band Cosmos, he went solo, releasing .Wavpool last year. His lyrics are nimble, sometimes laced with nostalgia: I just make the waves, I don’t ride them/ I can hear the lyrics in my spirit as I write them/ Why you wanna walk and talk just like them?/ I can’t get caught up in all the hype and the excitement. This melodic flow, over a sample of the iconic intro music from David Lynch’s Twin Peaks, makes you feel like you're gliding on a wave (but hopefully not the way Laura Palmer did). “It's a crowd favorite and personal favorite,” Allen said of the album’s title track, the music video for which dropped this week and showcases the Twin Peaks diner. The evening's lineup (a birthday showcase celebrating local producer Rasheed Smiley) also features the Bellingham duo that performs as Lonely Together, playing laid back space vibes with angelic vocals and heavy bass, plus Seattle's DJ Bogi.  –Agueda Pacheco Flores

The supper-theater troupe Café Nordo knows booze. They’ve presented original musical dinner shows about hard liquor (Sauced) and absinthe (Bohemia). So it was only a matter of time until they got around to champagne. This odyssey through the history of the bubbly was created by talented women, among them Billie Wildrick (director) and Opal Peachey (writer and star), and focuses on the glam French widows who invented and bottled champagne. With the bubbly comes a four-course dinner, of course, including such French delicacies as coq au vin and carrot soufflé. So ooh-la-la. And “À votre santé!”  –M.B.