Allen Ginsberg in the trees, James Baldwin on film, a new sundial at King Street Station and more cultural happenings. 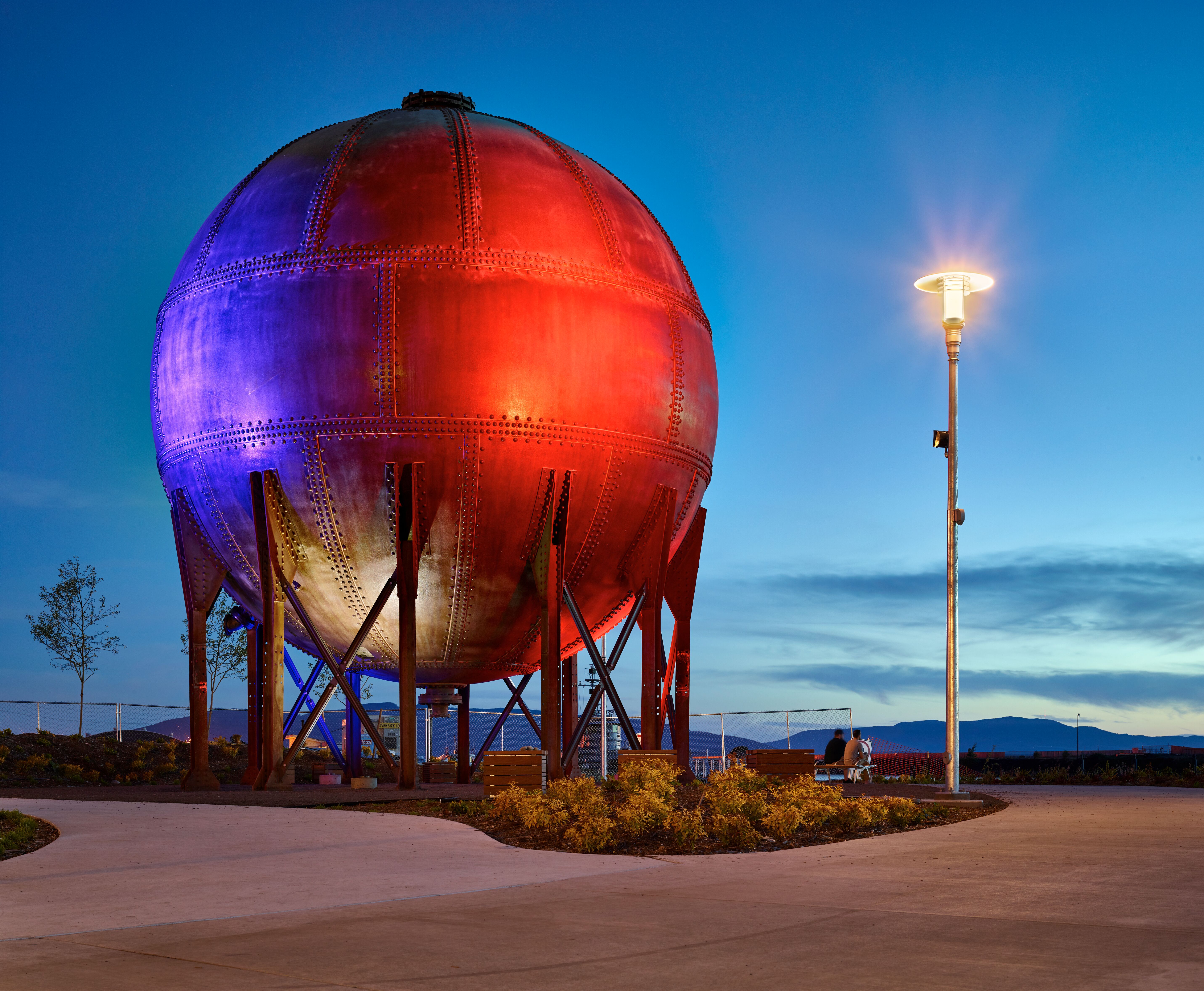 You’ve seen the famed glass spheres downtown, full of rare botanicals (and less rare: Amazon employees). But have you experienced Bellingham’s giant acid ball? The 400,000-pound metal sphere is a 1938 remnant from the defunct Georgia Pacific paper mill, where it served as an “acid accumulator” in the wood-pulping process. Reimagined by Seattle-based design firm Mutuus, the historic sphere — now called Waypoint — has been repositioned at the water’s edge in the city’s new Waypoint Park. To add a reflective sheen to the sphere, Mutuus coated it in tiny, glistening glass beads, like those used in highways. As it captures different qualities of light, depending on time of day, season and artificial lighting, the sphere seems to shift from its industrial roots to something floating and planetary. Now ready for its first full summer on view, Waypoint serves as a beacon linking the area’s past with new possibilities. –B.D.

If you go: Waypoint Park in Bellingham. (Free)

You could call Montana-based artist John Buck a master carver, but that would be missing the part of his work that seems hewn with some dark magic. His giant, impossibly intricate kinetic sculptures made entirely of wood whirr and squeak a bit, but it’s the goings-on they depict that shout for your attention. In one newly constructed piece, March of Folly, a line of figures marches inevitably forward: a tuba player, President Trump, a Trojan horse, a nuclear rocket. The timely tableau is cartoony and alarming all at once. In another new piece, Mother of All Wars,” wheels turn, waves flow and helmeted soldiers march in jointed lockstep behind a fork-tongued Trump, while behind them the whole world circles around. These remarkable artworks illustrate Buck’s take on the American political climate — where today’s absurdities might well become tomorrow’s apocalypse. Also on view are Buck’s large-scale, full-color woodcut prints, which are comparatively still but run deep. –B.D.

If you go: Greg Kucera Gallery, through July 13. (Free)

In 1855, the Treaty of Point Elliott made it illegal to construct Indigenous structures within Seattle city limits. That mandate will be joyously flouted on Friday, with a new temporary installation at King Street Station Plaza. Brings the Medicine Sundial consists of six 28-foot tall fir poles, sustainably harvested by Skokomish foresters, set in two tripod formations that align with the path of the sun on the summer and winter solstices. Created by artist and architectural designer Kimberly Corinne Deriana (Mandan/Hidatsa) in collaboration with Coast Salish carvers, the free-standing structure forms a circular gathering space within. It also serves as a visual representation of the Coast Salish story about people from many tribes joining together to lift up the fallen sky with poles — the story around which the Seattle Office of Arts and Culture built its current yəhaw̓ exhibit of Indigenous art, on view inside King Street Station through Aug. 4. Solstice celebration of the artwork will include Native American blessings and storytelling. –B.D.

Community screening of James Baldwin’s I Am Not Your Negro

Yesterday was Juneteenth, marking June 19, 1865, the day when slavery was abolished in Texas, one of the last Southern states to abide Abraham Lincoln’s Emancipation Proclamation of 1863. There’s perhaps no better way to celebrate this momentous historical event than by attending a screening of I Am Not Your Negro (2016), the stunningly powerful documentary about the aftermath of slavery and American race relations. The Academy Award-winning film is based on an unfinished manuscript by novelist and activist James Baldwin, who before his death had embarked on a book about the assassinations of Medgar Evers, Malcolm X and Martin Luther King Jr. Filmmaker Raoul Peck brings Baldwin’s words to vivid life with archival footage (and narration by Samuel L. Jackson). The film is being screened at the Northwest African American Museum as part of the Meaningful Movies series, and will include a panel discussion afterward — a very good thing, since, as the film makes clear, the race conversation in America is far from over. —B.D.

“Summer of ’69” may have been a chart-topping song by Canadian rocker Bryan Adams, but it was also an incredibly fraught time in American history. Watershed events included the moon landing, President Nixon pulling troops out of Vietnam, the Chappaquiddick scandal, the Woodstock music festival, the Charles Manson murders and the Stonewall riots in New York City — the last of which happened 50 years ago this month, and essentially kicked off the gay rights movement. Seattle Men’s Chorus may not have time to cover all these topics in its new concert, but it will be able to evoke the turbulent era by singing iconic hits from the period, including songs by Marvin Gaye, Sly and the Family Stone, Three Dog Night and the 5th Dimension. No word on whether Bryan Adams will get a nod too, even though “Summer of ’69” came out in ’84. —B.D.

Allen Ginsberg: If you want to see something, look at something else

Allen Ginsberg changed poetry forever when he released his barreling epic poem “Howl” in 1956. He became an icon of the Beat Generation and the LGBTQ community, revered as much for his striking oratory style (conversational, vernacular and vulgar) as for his political activism (he created the “flower power” movement and the “Human Be-In” counterculture festival). Now Seattle art initiative Western Bridge and local literary center Hugo House have teamed up to present a poetic ode to Ginsberg, which appropriately involves a meander through Volunteer Park. If you want to see something, look at something else is an installation originally created by Canadian artist George Farmer, consisting of 50 snapshots of Ginsberg across his lifespan, all affixed to trees near the park’s amphitheater. In addition to the tree-based photography exhibit, poets — including Dorothea Lasky, Rae Armantrout and Ron Silliman — will celebrate and perform Ginsberg’s work on the amphitheater stage. –B.D.

If you combined the bebop creativity of Betty Carter, the vocal range of Sarah Vaughan and a whimsical fashion and musical sense that’s very right-now, you’d get this splendid young jazz chanteuse. Cecile McLorin Salvant (a winner of the prestigious Thelonious Monk International Jazz Vocals Competition) is outstandingly versatile, and her voice is capacious.  She can sing blues, country, rock and show tunes. She can deconstruct a song with aplomb, bending and twisting, cooing and belting notes in surprising ways. And she can perform a standard like “Somewhere” straight through, with warmth and shimmer. Salvant comes to Dimitriou’s Jazz Alley for one night only, with the admirable Sullivan Fortner on keyboards. Their 2017 duo album, The Window, earned a 2017 Grammy Award. –M.B.

Chronicles of the Pike Place Market and Prohibition-era Seattle

Imagine the city of Seattle in an era when booze meant hooch from illegal stills and bootlegged spirits from Canada, and when Pike Place Market wasn’t a tourist mecca but a neighborhood farmer’s market. “Urban archaeologist” Brad Holden spins true tales of that colorful era in his new book, Seattle Prohibition: Bootleggers, Rumrunners & Graft in the Queen City with tales of moonshine and mavericks, icons and kooks in the early 1900s gleaned from recently unearthed historical documents and photographs. Holden will share some of his discoveries in a conversation at Folio: The Seattle Athenaeum, a literary center and library in Pike Place Market, in conversation with Jerry Antush and Bob Trombley of the Pike Place Podcast. –M.B.

“Cooking is not a chore,” proclaimed Julia Child with her typical ebullience. “It is a joy!” The joy of cooking, singing and eating merge in this mini-operetta by Lee Hoiby, performed in the cozy confines of the Jewel Box Theater at the Belltown nightclub The Rendezvous. The show features Broadway and Seattle actress-singer Anne Allgood as TV’s legendary chef. The show calls for the delightful Allgood both to sing arias (with piano man extraordinaire Mark Anders accompanying her) and to whip up Child’s recipe for a sumptuous chocolate cake right before your eyes. Meanwhile, the celebrated chef and author’s real-life grandniece Julia Prud’homme acts as host, sharing reminiscences of her remarkable Great Aunt Julia. Child (who died in 2004 at 91) gleefully spread French cuisine to the American masses, and audience members will get a taste of her gastronomy when that cake pops out of the oven. –M.B. 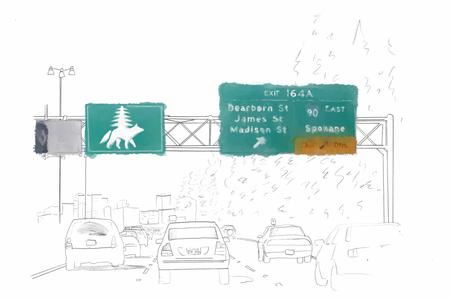 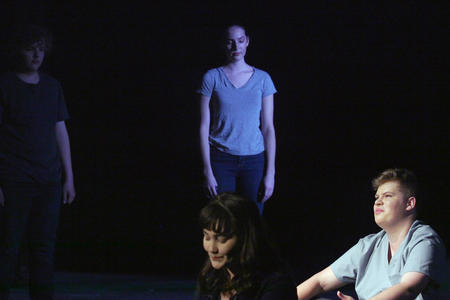 Two different plays depicting the all too common reality challenge cast and crew.

Two different plays depicting the all too common reality challenge cast and crew.