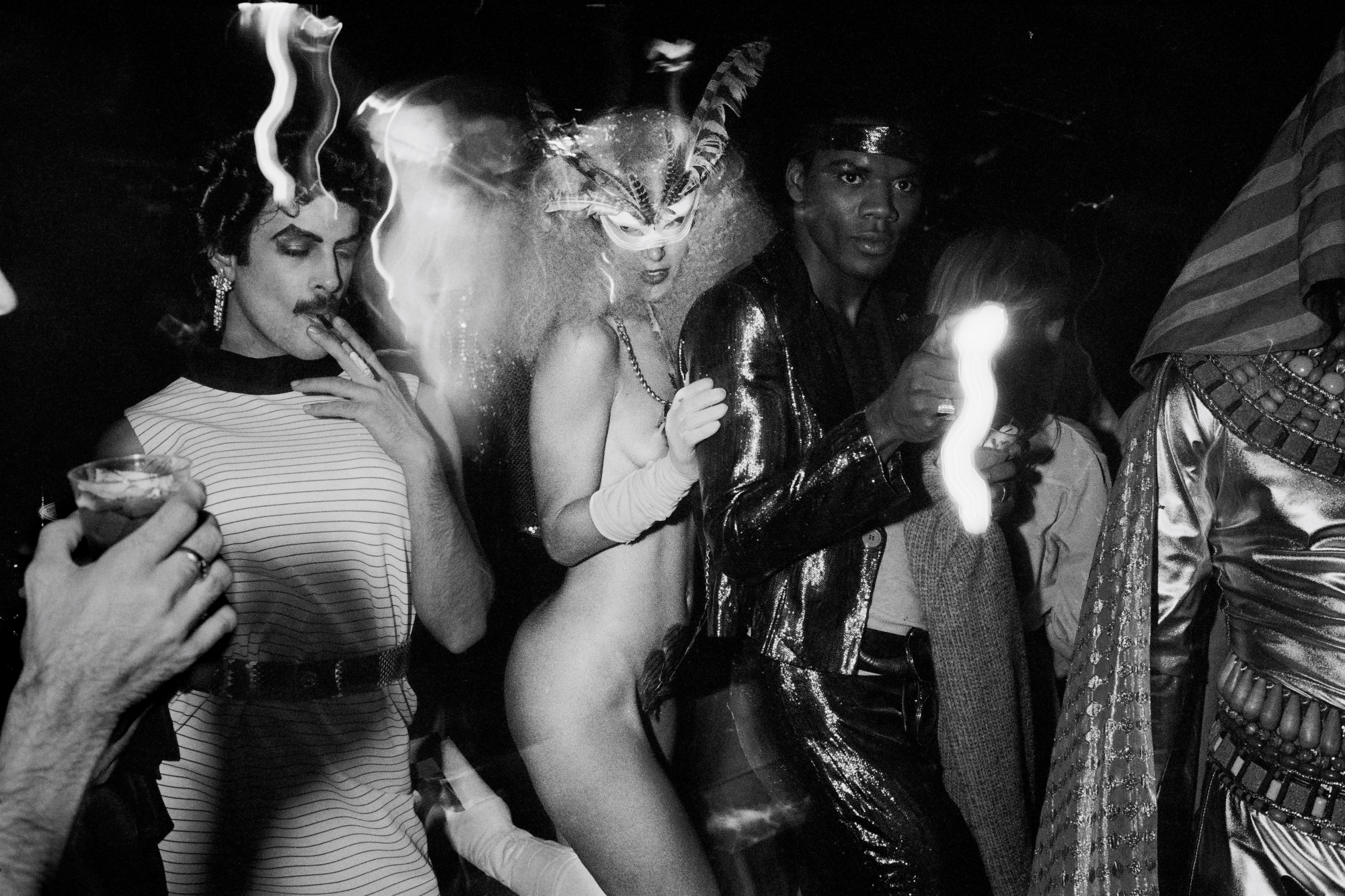 And you thought the Pride Parade was lit.... Swedish photographer Hasse Persson beautifully captured the reckless abandon (and righteous get-ups) of NYC's Studio 54 nightclub during its 1970s heyday. Seattle’s National Nordic Museum is currently showing a collection of his work. (Courtesy of National Nordic Museum)

From the Ridiculous to the Sublime

Ask old-school Seattleites if they remember performance duo Mandy and Bebe, and they get a dreamy look on their face ... “Oh they were so funny,” they’ll say. The brainchild of longtime Seattle choreographer Wade Madsen and dancer Nancy Cranbourne, the pair return to the stage together after some 12 years, performing the same enchanted comedy that earned them fans way back when. The new installment is called “This is It,” and features Mandy (Cranbourne) doing her Hollywood starlet schtick, peppered with deep thoughts about life and death. Her sidekick, Bebe (Madsen), plays along, speaking in French-inflected nonsense that only Mandy truly understands. Together the two engage in a strange and wondrous dance that leads to some pretty big existential insights. And that’s just the “ridiculous” part of the evening. The “sublime” comes in the second half, when a group of dancers presents Madsen’s contemporary piece, “Looking Back at Itself.” The work is a little spooky — during a recent rehearsal Madsen explained it’s as if these white-faced characters have been gathering dust in an attic for a long time. They stumble and stomp, getting reacquainted with their limbs, and seem to be in search of something they used to hold close. They cringe at unexplained noises above, find solace in each other and eventually break free. Like you do. –B.D.

For those looking to celebrate LGBTQ rights but who just aren’t into parades or street parties, Seattle offers several options for quieter commemorations (not to mention: brunch!). At Town Hall, author and psychologist Walt Odets talks about his new book, Out of the Shadows: Reimagining Gay Men’s Lives, which considers the spectrum of experiences — from older generations who needed to stay in the closet to young people coming out at an early age — to reframe the perspective on the gay male experience . At Pottery Northwest, the exhibit Queer Clay reveals a broad range of styles by Northwest artists whose identity is embedded in their work . And Northwest Film Forum is screening the remastered documentary Before Stonewall, which uses archival footage and interviews to explore the gay and lesbian communities that existed before the movement began its “out and proud” journey. –B.D.

We’re in for another weekend of lovely weather — good news for the 20th annual Arts in Nature Festival at Camp Long. Hosted by the Delridge Neighborhoods Development Association, the event takes place among the trees and inside eight rustic cabins on the 68-acre site. What started as a small collection of interactive installations and performances in the woods has blossomed into a thriving outdoor festival, this year featuring more than 60 visual artists, musicians and dancers, including Hollis Wong-Wear, Thaddillac, Cherdonna, Tiffany Wilson, Au Collective, Northwest Tap Connection, and The Half Brothers, plus a video poetry film festival, workshops on painting, break dancing and capoeira, and the chance to help create a giant nest of dreams. –B.D.

Far ahead of her time and remarkably heralded — given that she was a woman at the turn of the century — American composer Amy Beach (1867-1944) wrote large-scale symphonies, choral works and concerti. She also wrote a remarkable string quartet, Opus 89, that went unpublished until 1994, and has never been heard in Seattle — until now. Described as “lean and lyrical,” the quartet will be performed here July 17 as part of this summer’s monthlong Seattle Chamber Music Festival. Beach's piece quotes Inuit songs as thematic material, and one wonders where she could have ever heard them. That’s the fun of the festival — there’s always a fresh set of music, even for chamber music groupies. First-timers might try Dvorak’s “American” Quintet (July 5), or a rhapsodic evening of English song (July 12) with tenor Nicholas Phan and violinist James Ehnes (artistic director of the festival). The whole point of chamber music is to be as close as possible to virtuosic musicians (such as returning violinist wonder Augustin Haderlich) and achieve the goose-bump experience that composers intend (and the Nordstrom Recital Hall delivers). Pro-tip: Get the most out of the music by reading up a little beforehand on the human stories behind each work on the program. –Stephen Hegg

“Cooking is not a chore,” proclaimed Julia Child with her typical ebullience. “It is a joy!” The joy of cooking, singing and eating merge in this mini-operetta by Lee Hoiby, performed in the cozy confines of the Jewel Box Theater at the Belltown nightclub The Rendezvous. The show features Broadway and Seattle actress-singer Anne Allgood as TV’s legendary chef. The show calls for the delightful Allgood both to sing arias (with piano man extraordinaire Mark Anders accompanying her) and to whip up Child’s recipe for a sumptuous chocolate cake right before your eyes. Meanwhile, the celebrated chef and author’s real-life grandniece Julia Prud’homme acts as host, sharing reminiscences of her remarkable Great Aunt Julia. Child (who died in 2004 at 91) gleefully spread French cuisine to the American masses, and audience members will get a taste of her gastronomy when that cake pops out of the oven. –Misha Berson

Glitter! Wild dancing! Outrageous fashion! Partial nudity! What sounds like a raucous Pride Parade is also an accurate description of a new show of vintage photographs at Ballard’s National Nordic Museum. Studio 54 and Beyond is a departure from the museum’s Viking boats and Danish furniture, but the connection is clear. Swedish photographer Hasse Persson traveled to the U.S. during the 1960s and ’70s to document the turbulent era through a Nordic lens. In addition to shots of the rural American South and political figures (including Nixon and Jesse Jackson), Persson took hundreds of photos in the storied New York City nightclub during its disco heyday. While the Studio 54 shots include some celebrities (Andy Warhol, Liza Minnelli, Truman Capote, Brooke Shields), what’s most captivating are the anonymous crowd shots, which reveal the club’s anything-goes ethos, and its embrace of all genders and sexualities. If you can’t make the Pride Parade this year (or if you’re still looking for outfit ideas), the show is worth a stop. –B.D.

If you go: National Nordic Museum, through Aug. 25. ($5 plus general admission) 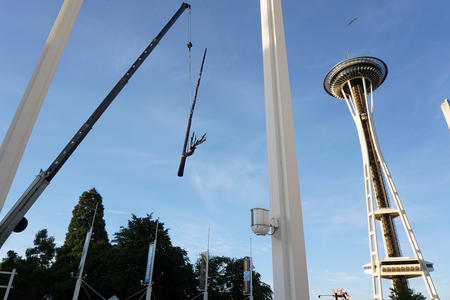 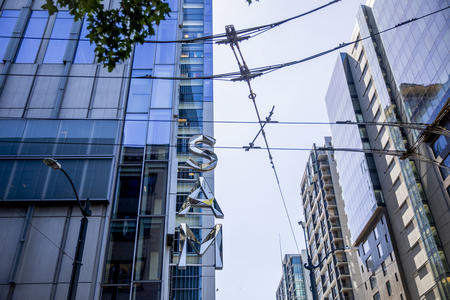