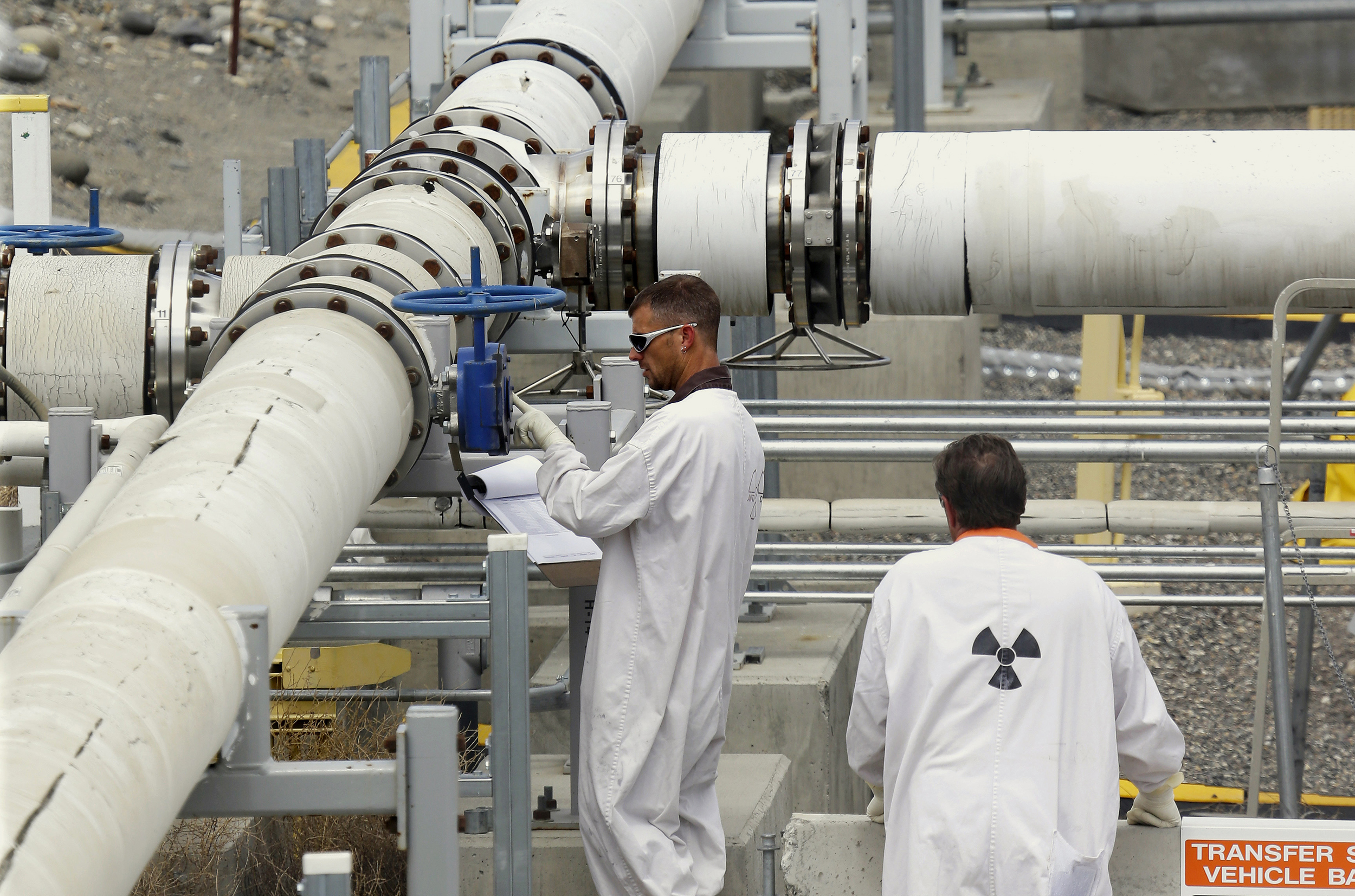 In this July 9, 2014, file photo, workers wearing protective clothing and footwear inspect a valve at the "C" tank farm on the Hanford Nuclear Reservation near Richland, Washington. (Photo by Ted S. Warren/AP)

For more than 30 years, the Defense Nuclear Facilities Safety Board has been entrusted with monitoring some of the most radioactive locations in the United States. That work is now being trimmed by the Trump administration, which has limited the board’s access to the Hanford site in Washington state and other federal nuclear cleanup sites.

These limitations worry some Hanford watchdogs. They argue this could potentially lead to engineering and safety problems being ignored because those troubles could be inconvenient for a federal government stuck in a decadeslong, and very expensive, slog to clean up Hanford and other sites throughout the United States.

At Hanford in Richland, the defense board and its on-site inspectors have had significant roles in making sure a huge and troubled radioactive waste vitrification plant is meeting technical and safety standards. At stake is the prevention of future safety disasters and crippling equipment breakdowns in highly radioactive areas that can hamper cleanup at Hanford and elsewhere.

The change in defense board access accompanies other recent efforts by the Trump administration to adjust its approach to the cleanup of harmful wastes. In one case, the administration, through paperwork, is seeking to reclassify some highly radioactive wastes at Hanford with a less dangerous designation, a move that would cut costs and shorten timetables. Also, the Trump administration has attempted to lower cleanup appropriations for Hanford and other Department of Energy sites, though Congress has had some success in fighting the proposed cutbacks.

These DOE sites — which number in the dozens, the largest being Hanford, the Idaho National Laboratory and Savannah River, S.C — made plutonium, processed uranium and created other materials for atomic bombs. Now, the nation is dealing with vast amounts of radioactive wastes from those efforts.

An independent federal agency, the Defense Nuclear Facilities Safety board actively pokes through the technical nooks and crannies of Hanford and other federal nuclear sites to hunt for potential safety problems. Congress created the board in 1988 as a response to safety problems haunting several DOE facilities, as well as to the 1986 Chernobyl reactor disaster in the Soviet Union. The board’s job is to make recommendations on safety matters to the U.S. secretary of energy. DOE does not have to follow those recommendations, but it is required to provide the public with reasons for skipping those suggestions.

In May 2018, DOE — which is in charge of cleaning up contaminated federal nuclear sites — issued Order 140.1 with the official purpose of clarifying responsibilities and lines of communication between the defense board and DOE on the Energy Department’s cleanup sites.

For the past 30 years at Hanford, defense board staffers have routinely sat in on internal engineering, budgetary and project meetings, as well as conducting on-site inspections. From these observations, the staffers have drafted weekly memos sent to the defense board and later made public. For example, a weekly memo from last month showed that several workers walked into a contaminated area without their safety equipment because proper warnings were not posted.

Under Order 140.1, the defense board staff has less access to meetings and on-site locations to learn what is going right or wrong, and what new problems are beginning to surge.

Hanford observers both working inside the government and operating independently say that Order 140.1 undermines that process in three major ways.

The second involves the information the defense board’s staff is allowed to look at. Order 140.1 puts draft documents and internal meetings off limits to the board’s staff.

The third area of concern is related to DOE employees and contractor workers, who under the new order are not allowed to speak with the defense board’s staff without permission from DOE.

“We’re worried about this. The DNFSB conducts the only independent oversight for nuclear safety. … To me, this is a pretty blatant move to get them out of the picture,” said Tom Carpenter, executive director of Hanford Challenge, a Seattle-based Hanford watchdog organization that specializes in whistleblower issues.

“It’s definitely not fair for DOE to roll back access,” said Ken Niles, assistant director for nuclear safety at the Oregon Department of Energy.

Sen. Patty Murray, D-Wash.,  is keeping close tabs on the defense board issue. “Sen. Murray is committed to full transparency and oversight of DOE operations — particularly those that impact worker safety, our environment, or public health. Additionally, Senator Murray is actively engaging on this topic to ensure the Board’s oversight role is reinstated, and is exploring legislative options,” said Murray spokesman Michael Brewer.

Washington’s Department of Ecology said it is keeping tabs on the issue as well, but has not settled on what it wants to do.

Hanford Advisory Board Chairwoman Susan Leckband of Benton City said Order 140.1 is on her group's radar, but it has not yet seriously discussed making any formal recommendations. The advisory board is a Northwest panel created by DOE, the state and the Environmental Protection Agency to provide advice on Hanford’s cleanup. Its 32 members cover the entire Hanford political spectrum, from tribes to local governments to business interests to unions to environmental organizations.

When Crosscut approached the defense board and DOE, both referred to publicly available letters and testimony transcripts made in the past year. The board held public hearings on the topic in Washington, D.C., and Albuquerque, New Mexico in August 2018 and February 2019.

In the August 2018 hearing, Dan Broullette, deputy secretary of energy, said the new limits merely make clearer the respective responsibilities of DOE and the defense board. Cooperation between the two entities will not be hindered, he argued.

Broullette’s testimony focused on the defense board’s staff being denied access before final decisions were made on budgets, engineering designs and plans for specific projects.

“We reserve the right to control information in the predecisional phase,” Broullette testified. “It is an ineffective use of our resources and yours to pursue interim staff positions that ultimately are not relevant, interesting though they may be.  …. This will ensure our subject-matter experts can freely offer ideas and conceptual solutions, as well as ensuring our accountability and ownership of the resulting decisions. We will consider and share this information on a case-by-case basis if we believe the information is mature enough to make the interaction valuable.”

At the August 2018 hearing, other DOE officials acknowledged that the defense board, the public and unions were not consulted before Order 140.1 was unveiled.

On Sept. 17, 2018, acting defense board Chairman Bruce Hamilton wrote a letter to Energy Secretary Rick Perry to say that DOE officials at the August hearing did not adequately cover the board’s concerns.

Citing existing federal laws on nuclear cleanup, Hamilton argued that DOE is legally required to cooperate with the defense board staff members, allowing them “ready access to facilities, personnel and information.”

In the letter, Hamilton also contested DOE’s move to deny the board’s staff access to “deliberative documents, predecisional documents or deliberative meetings. There are no limitations on the Board’s access to this type information contained in the Atomic Energy Act. … This restriction has potential impacts to the Board’s safety mission, because the Board’s expert advice is often dependent upon information, meetings and discussions with individuals that may be construed as deliberative or predecisional.”

Hanford’s largest current project is building a complex that would take 56 million gallons of radioactive waste in 177 leak-prone underground tanks and melt it with glass to create glass logs from which the radioactivity cannot escape, a process known as vitrification.

In 2010 and 2011, project contractor Bechtel National Corp. and chief subcontractor URS Corp. were accused by whistleblowers of not tackling design flaws in one segment of the project. These flaws increased the potential for hydrogen gas explosions, radioactive sludges clogging pipes and corrosion causing leaks in those same pipes. All of these problems would occur in highly radioactive chambers where information-gathering and repairs could be handled only through remote control.

Bechtel and URS tried to ignore those flaws — and retaliated against engineers and managers who brought up these issues — in order to make a 2010 deadline, which would result in a $5 million bonus for the companies.

The Defense Nuclear Facilities Safety Board got involved in 2011. In a report issued that year, the board noted that its observers had found widespread fear within the ranks of lower and middle managers, who felt they could not voice technical observations and opinions to upper management.

“The Board finds that expressions of technical dissent affecting safety at (the waste treatment plant), especially those affecting schedule or budget, were discouraged, if not opposed or rejected without review. Project management subtly, consistently, and effectively communicated to employees that differing professional opinions counter to decisions reached by management were not welcome and would not be dealt with on their merits,” the report said.

This scenario has been a Hanford tradition for decades. In the late 1980s and 1990s, workers and middle managers raised concerns about leaking tanks, the spread of underground contamination and lapses in radiation safety — and were mostly removed from their posts. Eventually, those problems were confirmed as real.

Ironically, DOE and Bechtel told the state of Washington in 2015 that Hanford could not meet a 2022 deadline to have the entire vitrification complex running because of problems with hydrogen gas, leaking and clogging from sludge, all of which they tried to suppress in 2010.

Today, there is a revised schedule for Hanford to get the facility that will handle low-activity radioactive wastes online by 2023 and to get the entire complex running by 2030. The $17 billion project had an original budget of $4 billion with a target of 2009 to begin vitrification. Two senior DOE managers at Hanford were ousted around the turn of the century when they argued the $4 billon budget was unrealistically low.

But also now, DOE wants to reclassify some highly radioactive tank wastes into less-dangerous, low-activity wastes. Such a change would allow some wastes destined to begin vitrification in 2030 to be switched to the less-complicated 2023 facility.

The defense board has not yet weighed in on that proposal, which is hotly contested by the state of Washington.

Meanwhile, the Trump administration also wants to trim the overall staff of the Defense Nuclear Facilities Safety Board.

In the Trump administration’s budget request for fiscal 2020 — which begins in October — the defense board faces a budget reduction from $31 million in fiscal 2019 to $29.45 million. The proposed fiscal 2020 budget calls for the defense board to have 100 full-time employees, compared with 117 in fiscal 2019, DNFS board chairman Bruce Halliman told the U.S. House Subcommittee on Strategic Forces on April 9.

This article has been updated to correct the year of the Chernobyl disaster.