WA's endangered pygmy rabbits bounce back from the brink

As climate change continues to endanger species and habitats, this grapefruit-sized rabbit stands a chance to reclaim its place in the landscape. 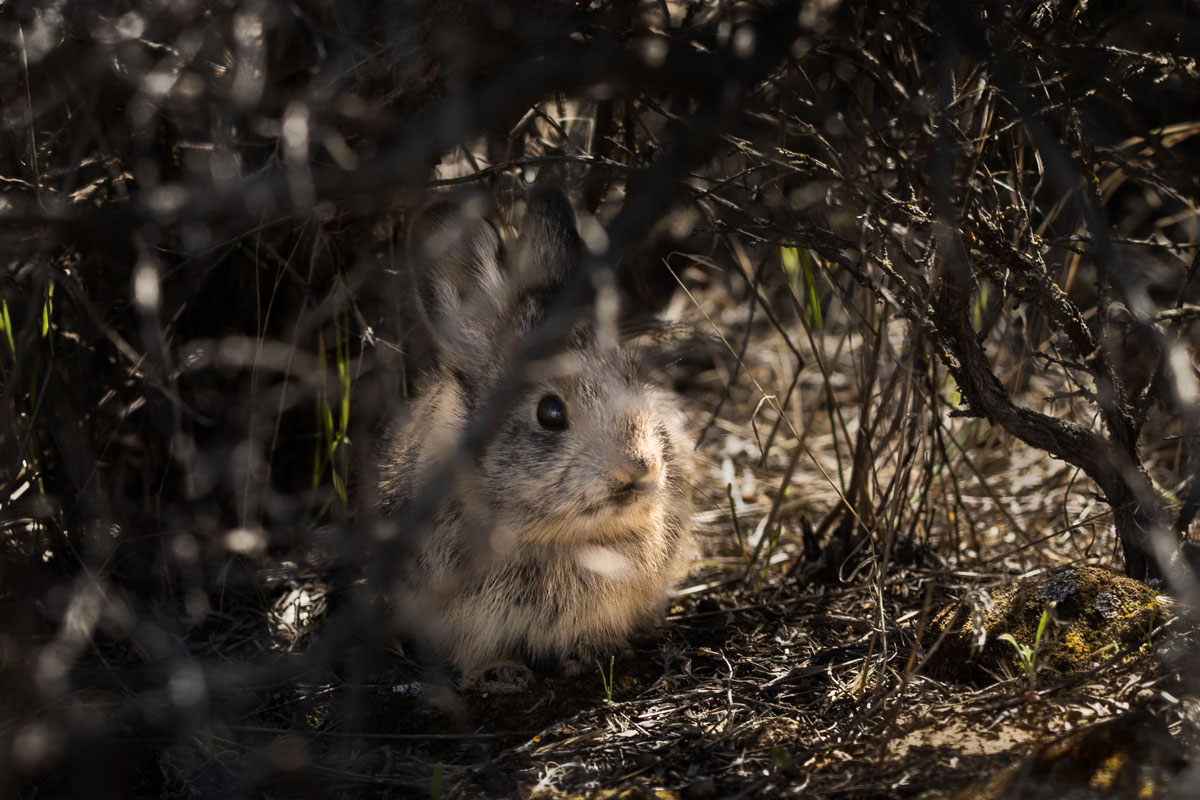 In the rolling hills of the Columbia Basin in Central Washington, a tractor kicked dust from a wheat field as an early May breeze filtered down from the Cascades rising in the west. In a patchwork of sagebrush and bunchgrass, Jon Gallie searched for the newest generation of North America’s smallest rabbit, the state and federally endangered Columbia Basin pygmy rabbit.

When not moving by memory through this reclaimed farmland, Gallie, an endangered species project leader with the Washington Department of Fish and Wildlife, traced his footsteps to dots on his phone marking den sites. In a city, he could easily pass for a Pokémon Go player, chasing fictional creatures in an imaginary digital realm. But the grapefruit-sized animals he was seeking are real, though elusive; after more than two hours of searching, all we found were empty burrows and an abundance of scat.

Still, the droppings the size of salmon eggs were an encouraging sign. That’s because a century of farming, development and increasingly frequent and intense wildfires has fractured the habitat of the Columbia Basin pygmy rabbit; by the late 1990s, just a handful were left. In 2001, biologists captured 16 of the last few dozen rabbits. Nearly two decades of direct human intervention followed, a multipronged effort that saved the animals from being banished to stories, screens and natural history textbooks. Pygmy rabbits now number in the hundreds in the Columbia Basin — but they remain far from a resilient and healthy population.

The rabbits have shown that they can rebound, however, as long as they have enough habitat to call home. The efforts to save these diminutive mammals illustrate a hard lesson: Even when scientists can breed an endangered species back to healthy numbers, protecting land and building bridges between dispersed populations remains a continuing challenge for recovery. For Central Washington’s pygmy rabbits, humans have been the agents of both destruction and salvation. Now, the challenge is to also play the role of nurturer, giving the rabbits — and other endangered species — the space they need to reclaim a place on the landscape.

WE LIVE IN AN AGE OF EXTINCTION, driven by human contributions to climate change and habitat destruction. Facing these crises has meant making compromises that save some species, but also change them. Hundreds of vertebrates have blinked out in just the past century. When biologists captured the last known wild Columbia Basin pygmy rabbits in 2001 to start a captive breeding program, they hoped to keep the species from joining their ranks. And in a sense, they’ve succeeded, as the burrows and scat in the sagebrush show.

But early on, inbreeding produced sickly offspring and low reproductive rates. In 2004, the scientists — part of a collaborative effort between universities, zoos and state and federal agencies — had to breed them with a closely related population, the Great Basin pygmy rabbit. This was a matter of “genetic rescue,” explained Stacey Nerkowski, a University of Idaho doctoral student who leads a team studying pygmy rabbit genetics.

The new genes staved off the complete loss of the population. While the last pure Columbia Basin pygmy rabbit died in 2008, unique genes that arose over millennia live on in the rabbits now munching sagebrush in Central Washington. On average, about 25% of each rabbit’s genome comes from the wild rabbits collected in 2001. Nerkowski said the resilience of those genes — they continue to show up, generation after generation, because they help the rabbits survive there — shows the value of recovering local rabbits, rather than simply transplanting other pygmy rabbits into the Columbia Basin. “This isn’t just a rabbit we picked up in Wyoming; it has the unique genetics of this area,” Nerkowski said.

AFTER TROMPING THROUGH UNFENCED stands of sagebrush for most of the morning, Gallie and I hopped in his truck and headed south to another rabbit recovery area, in the Beezley Hills west of Ephrata, Washington. Here, sagebrush and bunchgrass, flourishes of wildflowers, wheat fields and the dreaded invasive cheatgrass all intermix. In the Beezley Hills, land protected by The Nature Conservancy and a private landowner who has dedicated his property to pygmy rabbit conservation provide habitat for reintroductions.

Biologists have been trying to re-establish the rabbits on the landscape since 2007, when wild reintroductions failed. After that unsuccessful attempt, the recovery team turned to semiwild enclosures in 2011, to ease the transition from captivity to the starker realities of the rabbits’ natural habitat. Solid fences, irrigation systems, artificial burrows and supplemental food provided the animals the amenities project leaders thought they needed to survive. The rabbits proliferated, but then, in the confined and artificial space, disease did as well, and in 2016, reproduction in the enclosures dropped by about 75%.

For the past two years, the recovery team has been using different enclosures, more mobile and spartan in nature, both to avoid disease transmission and better prepare the rabbits for life outside the fences. No supplemental feeding is offered, and other than some water laced with medicine to fight off an intestinal disease, the sagebrush-blanketed hillside is left in its natural state. As we walked through the main enclosure at Beezley Hills, both adults and baby rabbits scattered in blurs of fur, zigzagging through the chest-high sagebrush. When caught against a fence line, the rabbits froze, blending into the gray bushes and light brown soil.

The changes have produced kits that survive better in the wild, allowing the recovery team to distribute them across the landscape. That’s vital to bringing back the rabbit, with the risk of population-decimating fires haunting its future — and its recent past. In summer 2017, the 30,000-acre Sutherland Canyon Fire wiped out the majority of rabbits in the area. As strong winds pushed the blaze over ridges and through draws, Gallie and his team quickly reconfigured the irrigation system in the Beezley Hills enclosure. They were able to save about one-third of the hundred-plus rabbits living there. But the threat to each of the three recovery areas remains in the fire-prone sagebrush, showing how important maintaining a wider swath of habitat is for the animals.

FIRE DOESN'T JUST SCORCH pygmy rabbit colonies; it also imperils the ecosystem they depend on. Repeated fires that both propel and are fueled by the spread of invasive species like cheatgrass deliver a one-two punch of destruction to native species in sagebrush habitat.

Corinna Hanson manages more than 30,000 acres in Central Washington for The Nature Conservancy with an eye toward preserving native habitat. That’s a constant challenge now, as summers get hotter and fires occur twice a decade, instead of less than twice a century, the historical norm. “When I think about restoration, it’s almost like we can’t keep up,” she said. “But we’re not going to give up.” In talking about endangered species recovery, the focus is usually on the species itself. But, she said, “when you work to conserve a species, it always comes down to habitat management.”

Expanding open space to connect the reintroduction areas, which are spread over about 40 miles and divided by roads, fields, sheer cliffs and houses, would be the ultimate sign of success for the project, Gallie said. Tools to stitch together the fractured landscape include land preserved for habitat protection by The Nature Conservancy and U.S. Department of Agriculture grant programs that pay farmers to take land out of production so wildlife can use it instead.

Gallie said communicating the goals of the recovery effort and building trust between people in town, farmers in the country, nonprofits and government partners is key to the program’s success. “You can have the best scientists and the best habitats and the best approach in the world, but if everyone out here is skeptical and oppositional, it’s going to make things very difficult.” When he appears at community events and at farmers’ doors, Gallie said, the familiarity and trust he’s built show locals that the pygmy rabbit program isn’t some big government overreach happening in a faraway office. “It’s just me, the same guy you wave to everyday, with the same dirt on my boots.”

COLUMBIA BASIN PYGMY RABBITS are far better off today than they were two decades ago, but their future remains tenuous. One fire could wipe out most of the population. And until they inhabit continuous corridors, where they can meet new mates and be less vulnerable to catastrophic fires, they’ll remain on the precipice of extinction.

Still, the species is gaining ground in a time when stories of loss pervade conservation. The world is losing species. It’s losing habitat. And humanity is losing time to try to save the current biome from the worst impacts of climate change. But perhaps our biggest deficit, and greatest challenge, is our apathy toward that loss.

“When I get asked — ‘Why do we need pygmy rabbits?’ — I don’t always have the best answer,” Gallie said, as fine dust kicked up with each step we took through the sagebrush. “You either value biodiversity or you don’t and, if you don’t, there’s pretty much nothing I can say that’s going to make you go, ‘Oh, now I agree.’ ”

As a society, it’s often hard to agree on which species to save, which organisms are necessary to make an ecosystem whole, or if it even makes sense to try to prevent extinctions. In all of those debates, Gallie pointed out that we often forget the current moment is a blip in evolutionary history, and, regardless of human interventions, nature will continue to shape this landscape. In the end, he said, “Life always wins. It’s more our loss.”