While airlines rake it in, catering staff at Sea-Tac airport threaten to strike

Other workers at the airport saw their pay go up when the City of SeaTac upped its minimum wage. The people who make food for the flights did not. 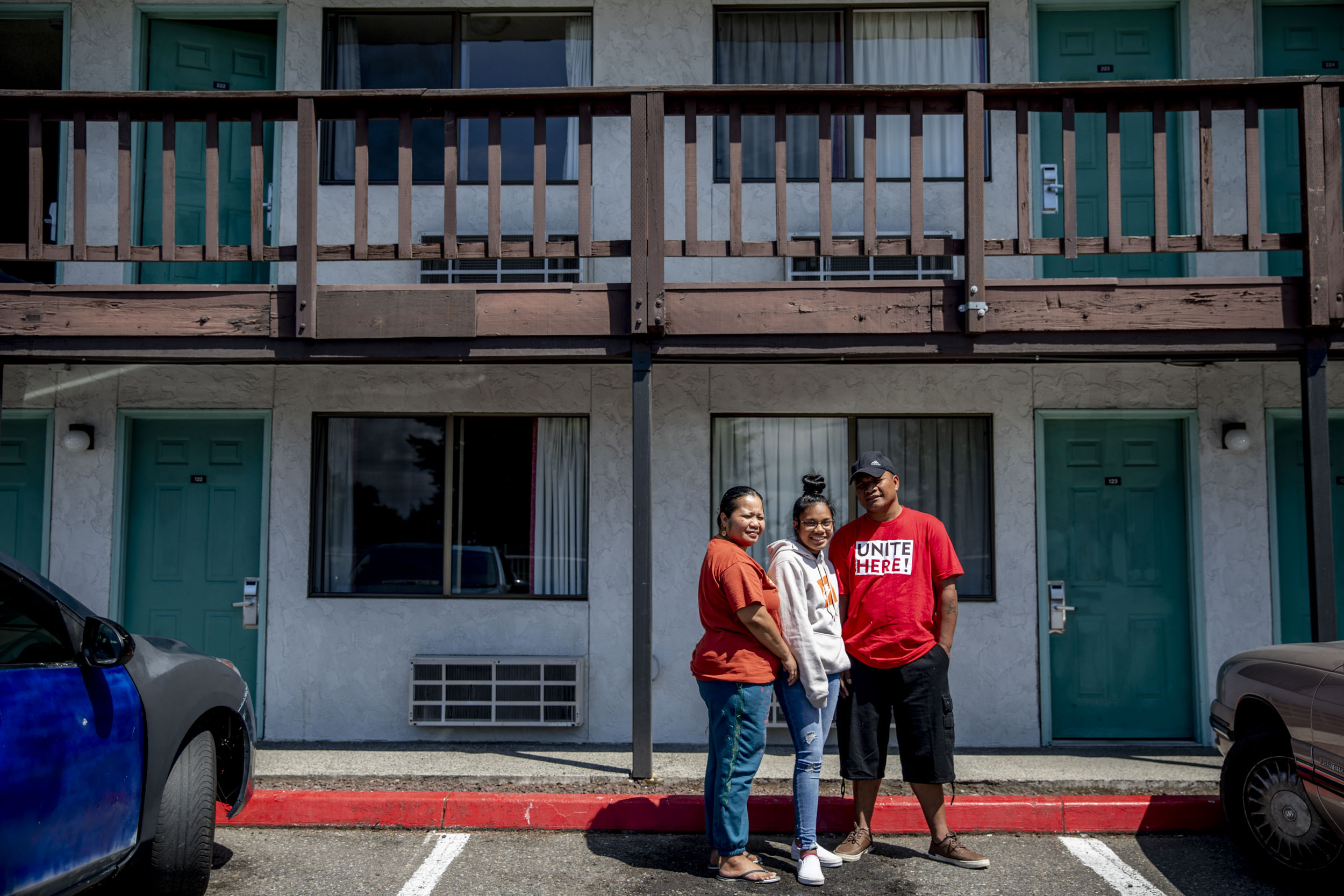 Paulina and Ronnie Lalimo and their daughter, Rebecca, 15, outside of the Valu Inn Sea Tac where they are currently living, June 14, 2019. (Photo by Dorothy Edwards/Crosscut)

Ronnie Lalimo makes more than most of his colleagues. As a driver, he helps deliver food to planes for some of the country’s biggest airline companies: Alaska, American, United.

Yet Lalimo, 46, has lived at a hotel in Des Moines because he can’t afford to pay first and last month’s rent on an apartment, in addition to the security deposit that landlords typically require. Instead, Lalimo pays approximately $89 a night, or about $600 a week, for a small room with a microwave and two beds. Lalimo shares the room with his 15-year-old daughter and wife.

For the past year, after finishing his shift as a driver at LSG Sky Chefs, one of the world’s largest airline catering companies, Lalimo has picked up his daughter at school to drive her back to the hotel, the Valu Inn Sea Tac. He said she looks both ways before stepping out of the vehicle to make sure no one discovers where she lives. She constantly asks her father when the family can move out.

“I can’t even answer her,” Lalimo said in a recent phone interview. “But I gotta hustle, you know. I’m trying my best so that my daughter will understand that her dad really struggled to try to find a better life for her.”

“It’s really hard for me,” Lalimo said. “All I wish is that I can get an apartment, so she doesn’t have to be embarrassed.”

In an effort to achieve that goal, Lalimo has joined more than 800 Seattle-Tacoma International Airport workers who are threatening to strike to protest working conditions. The workers, the majority of whom make less than $15 an hour, say they need better wages, health insurance and a pension.

Although the city of SeaTac has a “living wage” ordinance, which currently sets the minimum wage at $16.09, the law does not apply to employees like Lalimo. Back when it was drafted in 2013, the ordinance allowed companies and unions to negotiate to waive the higher wage requirement. It also included an exemption for certain workers, including catering workers.

“The stories of those workers in general are incredible,” said Stefan Moritz, secretary treasurer of Unite Here Local 8, the guild representing the workers.  “Just really hard choices about poverty and where to live.”

“One job should be enough to survive,” Moritz said, while noting some workers are forced to work two jobs or overtime to make ends meet. “We think poverty must end in this industry once and for all.”

Moritz said only 27% of Sea-Tac airport catering workers had health insurance in 2018, largely because of the cost of the plans provided by employers.

Last week, the vast majority of workers at the two catering companies the guild represents — LSG Sky Chefs and Gate Gourmet — voted to authorize a strike, the first step toward a potential walkout. More than 10,000 other catering workers at airlines in 20 airports across the country potentially could join them.

Still, because of the Railway Labor Act, which is intended to prevent the disruption of rail and airline service, the federal National Mediation Board must give airport workers permission to strike. If workers were to walk out of their jobs collectively, they could disrupt the airline industry, potentially delaying travel for thousands of Americans. The National Mediation Board will typically release workers only after a mediator advises the agency to do so because the two parties are unlikely to come to a contract agreement.

For now, Sea-Tac workers are planning to spend the coming weeks raising awareness by picketing at the airport and conducting other actions. The first rally at Sea-Tac airport will take place on Wednesday, June 19. Unite  Here International also is planning a national day of action on July 3.

In response to questions about the potential strike, Gate Gourmet said it “continues to work in good faith with the union and federally appointed mediator to make improvements for our people across wages and benefits as we have in the past. While our goal is to reach a new agreement as quickly as possible, the negotiation process can be lengthy.”

LSG Sky Chefs, for its part, said: “Our company values the hard work and dedication of our team members. Wages, as well as other benefits, including vacations, uniforms and company-provided meals, as well as health and welfare, are subject to the collective bargaining process between our company and their union representatives … and we are continuing to negotiate in good faith.”

Tereza Kuol Arop, 36, who is originally from South Sudan, packages food for the airline industry. She makes only $12.50 an hour. After paying $1,500 in rent, as well as other bills, she can barely afford to put food on the table. She makes up for the gap in pay by working overtime, sometimes 12-hour days six or seven days a week.

Arop lives in Burien with her husband, who works as a janitor at the school her daughter attends.

“I work hard and deserve to have more pay,” Arop said in a recent phone interview.

“I think it’s not fair. I thought we were equal,” she said, referring to other airport employees who are covered by SeaTac’s living wage ordinance.

Arop, who graduated from high school but never had the chance to pursue higher education, said her biggest concern is being able to afford college for her daughter, who hopes to one day become a doctor. Arop said she once had the same dream, but was forced to give up.

This story was updated to clarify why catering workers do not benefit from the city of SeaTac's living wage ordinance.