Why it wasn't enough to just leave the pinto abalone alone

Two decades ago, Washington made it illegal to harvest the giant sea snail. Earlier this month, the state added it to the endangered species list. 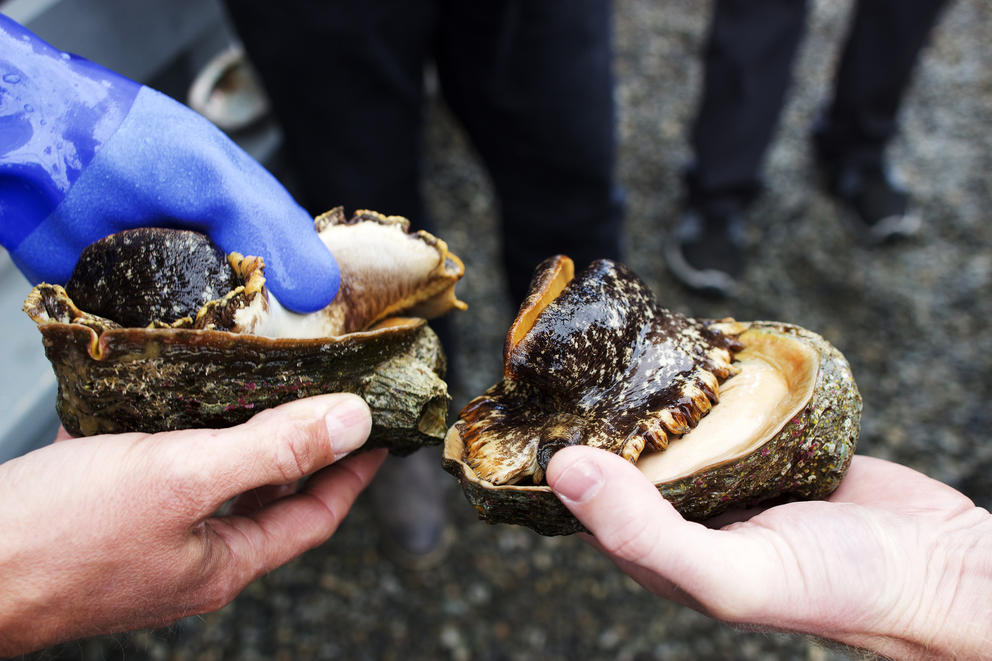 Shellfish biologists Josh Bouma and Hank Carson, at the Kenneth K. Chew Center for Shellfish Research and Restoration, show off the differences between male and female sea snails on June 4, 2019. Female sea snails, left, have blue-green reproductive organs, where males' are more taupe in hue. (All photos by Hannah Weinberger/Crosscut)

When Kelley Scarzafava first started diving for pinto abalone in the San Juan Islands in the late 1980s, the sea snails carpeted the rocky kelp beds in plentiful clusters. “We would go out and spear a fish or grab a couple of abalone and get a couple scallops and have a barbecue and call it a day,” she says.

But by the time Scarzafava opened a local dive shop in 1996, pinto abalone had virtually disappeared. In fact, the Washington Department of Fish and Wildlife (WDFW) instituted a “fishery closure” in 1994, making the harvest of the snails illegal in hopes that doing so would revive the local population.

Yet, despite the fishery closure, the state’s pinto abalone population is 97 percent lower today than in 1992.

Scarzafava recently spotted a lone abalone at a nearby dive site during a scuba class, and it was cause for celebration. Rather than grab it for dinner, she simply marveled, and then reported the sighting to WDFW.

“A new diver doesn't really understand, because they don’t know what it was like 30 years ago, when we didn't pay attention to the abalone… and now [even one] is a big deal,” she says. “We don’t see these anymore.”

Desperate to save the local population, WDFW initiated the process last October to uplist the pinto to endangered status. The new designation was announced at the end of last month, making it the first-ever marine invertebrate to be listed as endangered by the state of Washington.

“[We] decided that the benefits — enforcement penalties, recognition and communication of the problem, possible opportunities for funding or partnerships — were worth the work,” says WDFW’s Hank Carson, a shellfish biologist. He manages the state’s commercial shellfish dive stocks, and since 2017 has also been “tasked with recovery of this fishery, but it's more about saving the species at this point.”

Before the listing, a violation meant a maximum penalty of $1,000 and 90 days in jail. But now, second offenses will result in a felony, a $10,000 fine, up to five years in jail, and a two-year fishing license suspension.

Officials currently are drafting a formal recovery plan to comply with the listing; and using increased funding to expand the state’s decade-old abalone hatchery program based at the Kenneth Chew Center for Shellfish Research and Restoration in Manchester. The Legislature allocated $900,000 toward abalone restoration in the 2019-2021 state budget, in addition to the $200,000 from the general fund that the state already puts toward restoration efforts.

Yet WDFW biologists and enforcement officials remain frustrated by the failure of the 1994 fishery closure to mitigate the decline. “That fishery closure, for a fishery management agency, [was] like the nuclear option,” says Carson.

It has taken decades to figure out why it didn’t work.

Pinto abalone decorate shallows along the West Coast and around the world, but as the only abalone species native to Washington, the local population is special. The tender flesh and luxurious mother-of-pearl shell of the animal, which can be found from the San Juan Islands through the Strait of Juan de Fuca to Cape Flattery, have made it a prize of divers and chefs since recreational fishing opened in 1959.

By the mid-’80s, fishermen were taking about 40,000 abalone from Washington waters each year. Washington has never had a commercial fishery for the abalone, so it isn’t possible to track local prices. But wild-caught pinto abalone in nearby Alaska increased from $1 per pound in the 1970s to more than $10 before the fishery’s closure in 1996.

“People used to go out in the low tides, and they were actually able to pick abalone up without diving,” says Ralph Downes, an enforcement officer with WDFW who’s been patrolling the San Juans for nearly three decades.

Then the boom busted. By 1991, WDFW biologists noticed the population had dropped to half of 1981 numbers. In response, the state set up monitored index stations. 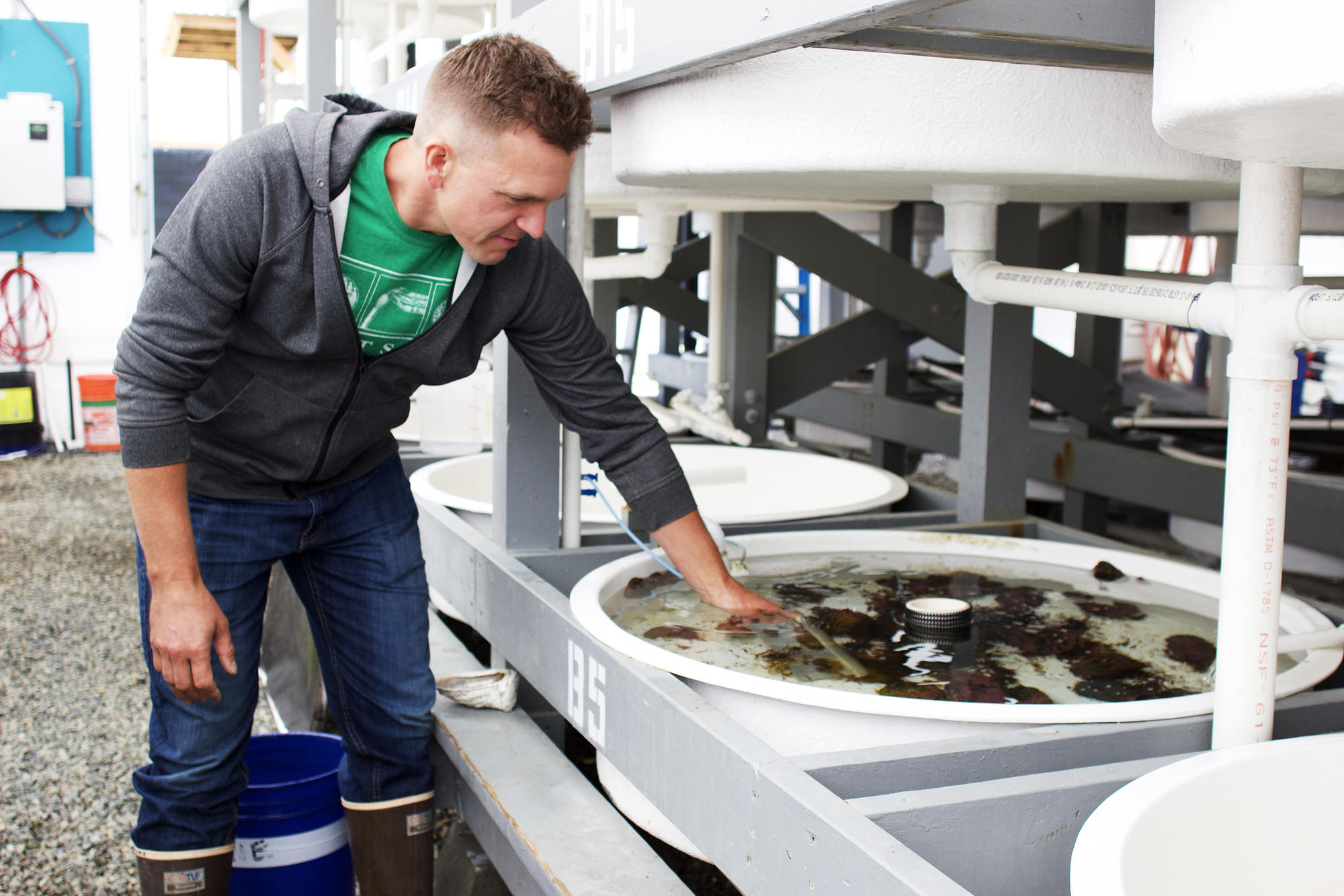 It’s hard to quantify the impact of poaching and overfishing on abalone in that era, Carson says. “Poaching in Washington and British Columbia were certainly ‘commercial-scale’ — there are pictures of pickup trucks full — [but] harvest was probably the leading cause of decline,” he says.

A survey of 10 known abalone monitoring sites in 1992 showed a mere 359 animals, leading to the fishery closure in 1994.

By the time the state instituted its prohibition, the prospects for harvest had waned considerably. Densities were so low when the fishery closed that “it would have been harder and harder to make it worth one’s while to poach on the commercial scale,” Carson says.

Twenty-five years later, the abalone’s situation has become even more dire: A 2017 review of the monitored sites surfaced only 12 abalone. Yet poaching is likely not to blame.

“Any recent poaching is likely to have been people taking one or two opportunistically,” Carson says.

While the pinto abalone’s initial decline was largely the result of overfishing and poaching, experts have learned that there is more to reviving the pinto abalone than leaving it alone. And the new designation will help the state do more.

Washington had its sights set on greater state protections since the fishery closure. WDFW designated the pinto abalone a State Species of Concern in 1998; and in 2008, a Species of Greatest Conservation Need: one step removed from endangerment. Then, the federal government considered adding the pinto abalone to its endangered species list in 2014. It ultimately declined to do so, given larger sister populations along the West Coast.

“In my mind when the federal review panel declined to list, we started thinking seriously about the state listing again,” Carson says.

An adult pinto abalone is about the size of a softball, shell included; with the feel and consistency of a human tongue. It’s also an essential cog in the marine ecosystem.

“They're really important to maintaining the health of the rocky reef habitat,” says Josh Bouma, a shellfish biologist with Puget Sound Restoration Fund (PSRF) and an abalone expert in Washington’s restoration efforts. Abalone graze on algae and diatoms, freeing up rocky real estate for kelp and other critters.

But the pinto abalone’s lack of movement, combined with its unique reproductive biology, is the reason why allowing it to repopulate naturally doesn’t do the trick.

It is with these traits in mind that Bouma’s team at PSRF — under contract with WDFW and the National Oceanic and Atmospheric Administration, and in partnership with treaty tribes, universities and others — has been growing genetically diverse, hatchery-farmed stock and “planting” it throughout Puget Sound since 2009. 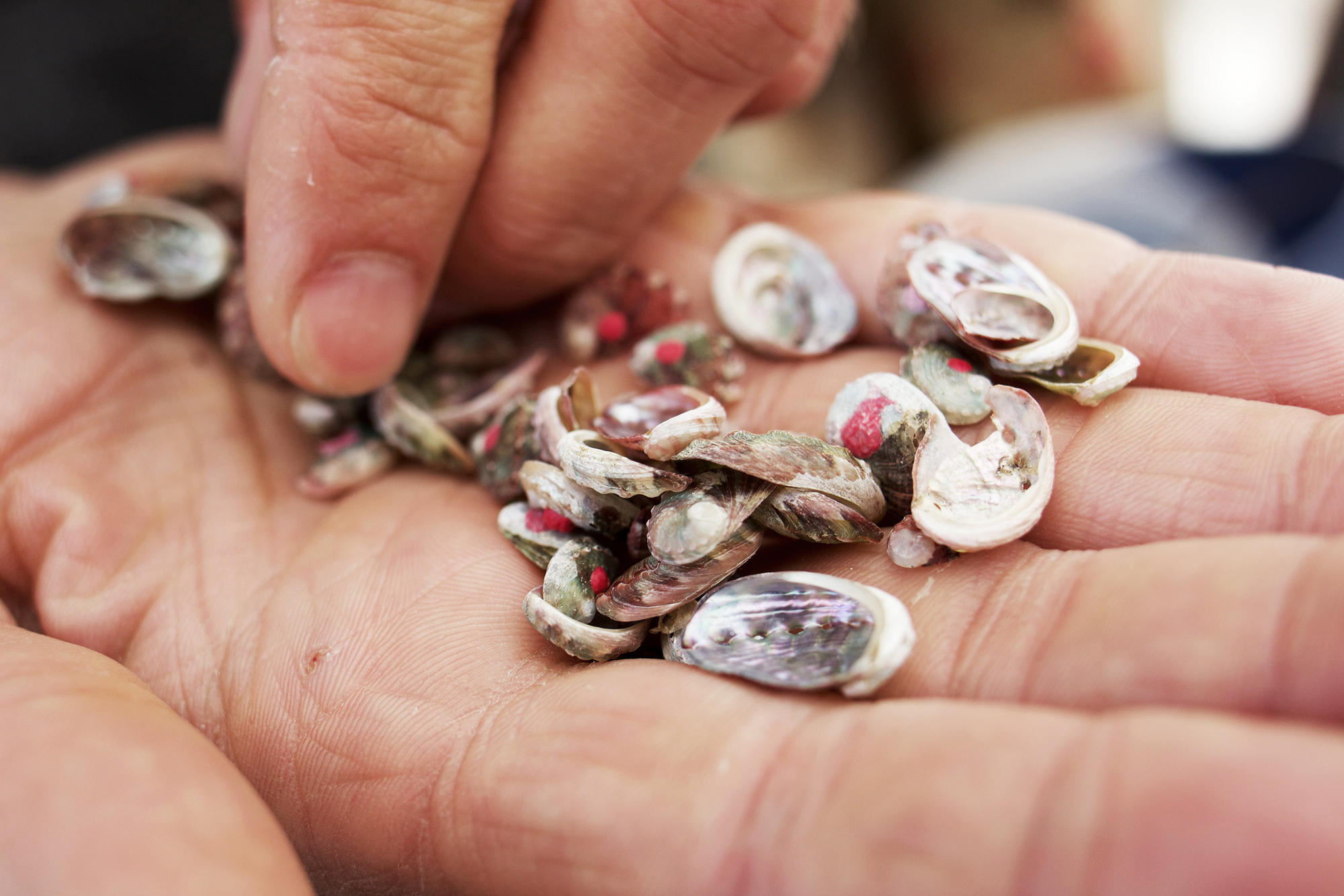 Abalone researcher Josh Bouma palms a handful of shells from young pinto abalone, tagged with identifying markers, at the Kenneth K. Chew Center for Shellfish Research and Restoration on June 4, 2019.

Abalone researcher Josh Bouma palms a handful of shells from young pinto abalone, tagged with identifying markers, at the Kenneth K. Chew Center for Shellfish Research and Restoration on June 4, 2019.

The partnership and planning for the hatchery program began in 2002, the same year a survey of monitored sites left biologists feeling “that this population was not going to recover on its own,” Carson says.

“The work that we've done to date has been kind of a cautious, iterative approach … so we've been careful and slow about it,” Bouma says. “I think what we've learned to date puts us in a good position to now scale it up, assuming we can fund it and staff it.”

For now, the strategy appears to be working. The team has released 22,000 juvenile abalone into the wild, with their survival rate at 10 percent after one year. “It seems like a low number, but in terms of restoration ecology that's pretty good,” Bouma says.

The population requires human intervention because abalone are, like lots of mollusks and invertebrates, broadcast breeders. That means that while they don’t need to touch to breed, they do need to be in relatively close proximity for fertilization to occur.

Baby abalone don’t begin in utero. Male and female abalone release sex cells into the water to fend for themselves. Adrift in bustling ocean currents, they grasp toward each other and merge to create larvae.

The difficulties created by this type of breeding explain, in part, why the fishing moratorium did not create the desired effect of a population bounce back, experts say.

While broadcast spawning was discovered in 1984, it wasn’t until 1999 that two Australian researchers conducted experiments that showed its importance to abalone. Since abalone populations need to be close together to procreate, overfished populations separated by large distances are at huge reproductive disadvantages: "Fertilization may be a limiting factor in some exploited populations when distances separating spawning individuals are too large," they wrote.

These researchers determined that abalone densities needed to be at or above 0.15 individuals per square meter in order to successfully produce young. The WDFW’s test sites in 2006 had mean densities of 0.04 per square meter — far below the minimum requirement.

The monitoring sites, Carson says, were launched to show evidence over time that the fishery closure was needed to help recovery. “I think everyone was surprised that densities continued to decline after the closure, and motivated a paper [investigating why].” The paper was published by WDFW’s Don Rothaus in 2008.

Rothaus suggested in the paper that by the time of the ban, remaining wild abalone were below a still-unknown fertilization threshold, too few and far between to produce larvae at a sustainable rate — what ecologists call the Allee effect.

Wild juveniles haven’t been spotted in Washington for a decade. The ones that have been found have shown a larger average shell size, indicating that Washington abalone are aging and failing to produce new members.

Rothaus also wrote the growth in shell size meant poaching wasn’t the continued source of the decline, because poachers would reasonably grab for the largest members of a species.

“In retrospect, maybe we should have closed [the fishery] a little earlier,” WDFW'’s Downes says.

Still, the restoration work continues against unlikely odds, made more difficult by the reality of a rapidly changing ocean.

“It's not [like we're just producing] a bunch of abalone and [putting] them back and [seeing] the population come back,” Bouma says. “We need to understand the implications of things like [how] the ocean is changing, [and] how that's going to impact their recovery long-term.”

Mollusks are hit harder by acidification than other invertebrates because it's harder to build and maintain their calcium-carbonate (read: pH basic) shells as carbon dioxide increases and pH becomes more acidic. That’s not the end of climate change worries: Research shows warming water can crash red abalone populations and, while green abalone are more temperature resilient, favorite foods like kelp are not.

Carson and colleagues noted as much in a December 2018 briefing: “If conditions continue to change rapidly, the species may be unable to shift habitat, behavior, diet, or physical tolerance soon enough to avoid devastating results.”

by / October 14
Inside Crosscut