Why is Seattle Parks and Rec hip-checking roller derby? 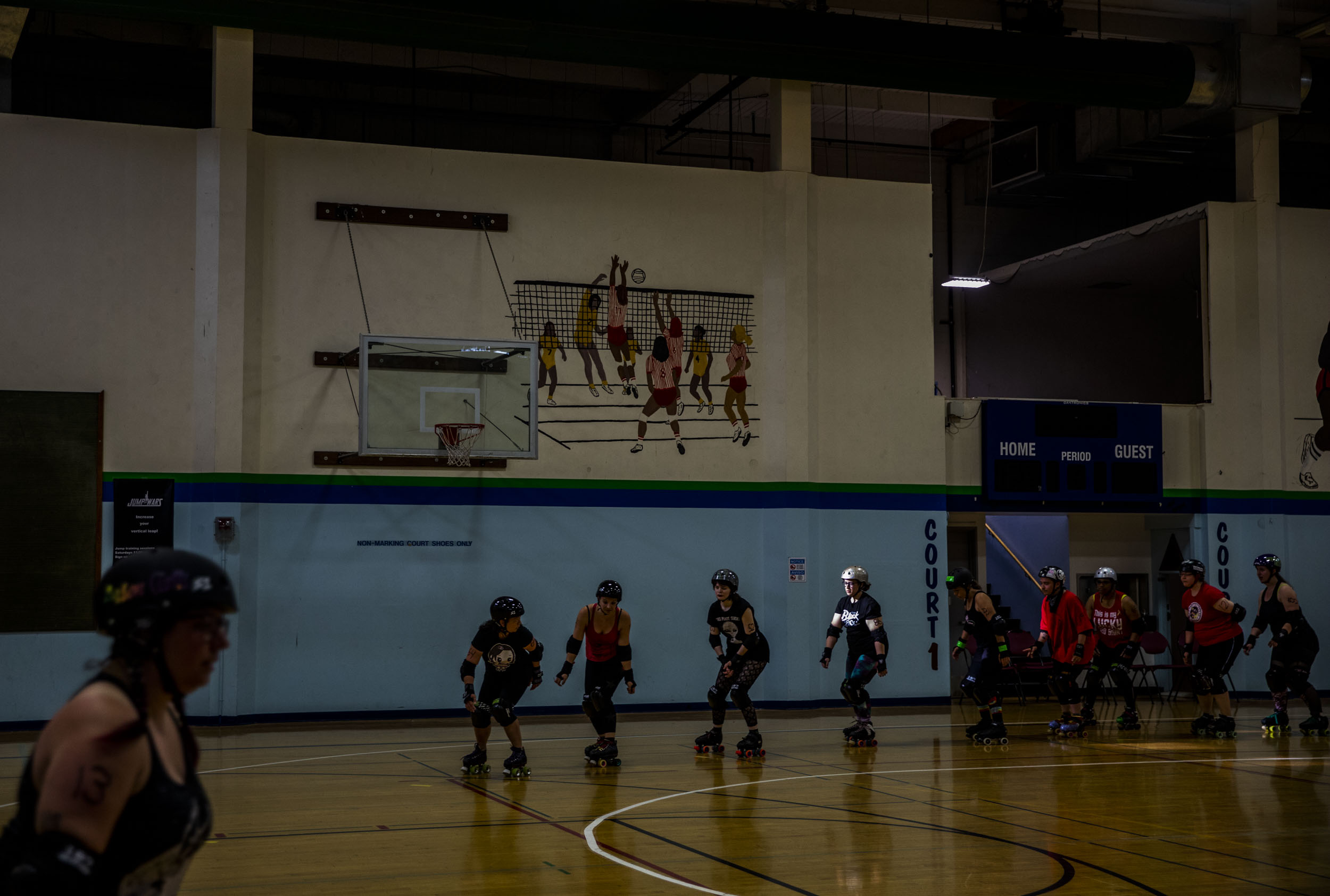 The PFM recreational roller derby group warms up for a scrimmage at the Magnuson Park Community Center in Seattle on June 9, 2019. (All photos by Dorothy Edwards/Crosscut)

Amid all the bad news for women and other uterus-having people, the smaller-scale tragedy of Seattle’s roller derby apocalypse might understandably have slipped your radar. Why complain about something as mundane as losing a warehouse lease or some lines on a community center floor when from Alabama to, well, Washington state, legislation is being proposed to send women, barefoot and pregnant, back to the kitchen?

But while fighting the big fights, the little fights remain important, too.

Roller derby empowers the (mostly) women and girls who play it; just ask any of the thousand-some participants in the Seattle area. Yeah, it’s big. You know someone involved in derby, and it might not be who you think: We are students, tradespeople, professionals and parents; we are school-age children and old enough to be grandparents; we are queerer than average, with a quarter of players identifying as something other than heterosexual; we are all genders, one of few sports welcoming trans and nonbinary players.

You may have heard about Rat City Roller Derby and Seattle Derby Brats losing their space, but those are just the most visible of a dozen local leagues. The central issue at hand is that not one of us has a secure practice space.

We are extremely fortunate in Seattle to have many derby options, making the sport accessible to basically anyone. I first learned about roller derby by watching Rat City play at Key Arena. It was a big deal, a real sport with impressively athletic women who sometimes sent each other flying off the track as the crowd of thousands collectively gasped. But if Rat City had been the only league in town, I never would have been bold enough to start playing, even though I secretly wanted to. I thought it was only for women tougher and more athletic and younger than I.

I was 31. I’d never done organized sports in my life and just wanted a fun physical hobby to maybe help me lose a few pounds (what can I say? I am a human woman). Luckily, I found PFM Roller Derby, a recreational league with no pressure to be competitive. In it I found a lot more than I’d been looking for. I found a community of strong, supportive women and, even more crucially, I discovered that I was tough enough for the sport. It’s been seven years since I first stepped onto a track.

Now, in Seattle, the sport I’ve come to cherish is facing existential peril. Tilted Thunder Rail Birds, who play a type of derby called banked track roller derby (the version of the sport shown in the film Whip It), are the proud owners of one of only seven banked tracks in the country, but it mostly stays in storage. They assemble it a few times a year for whirlwind bout weekends at the Evergreen State Fairgrounds. So for a time, the other leagues could pretend Tilted’s space concerns wouldn’t affect us.

By contrast, flat-track roller derby — what most area leagues play — doesn’t need much. Just a big, flat, safe floor with some lines on it. This is surprisingly hard to find. 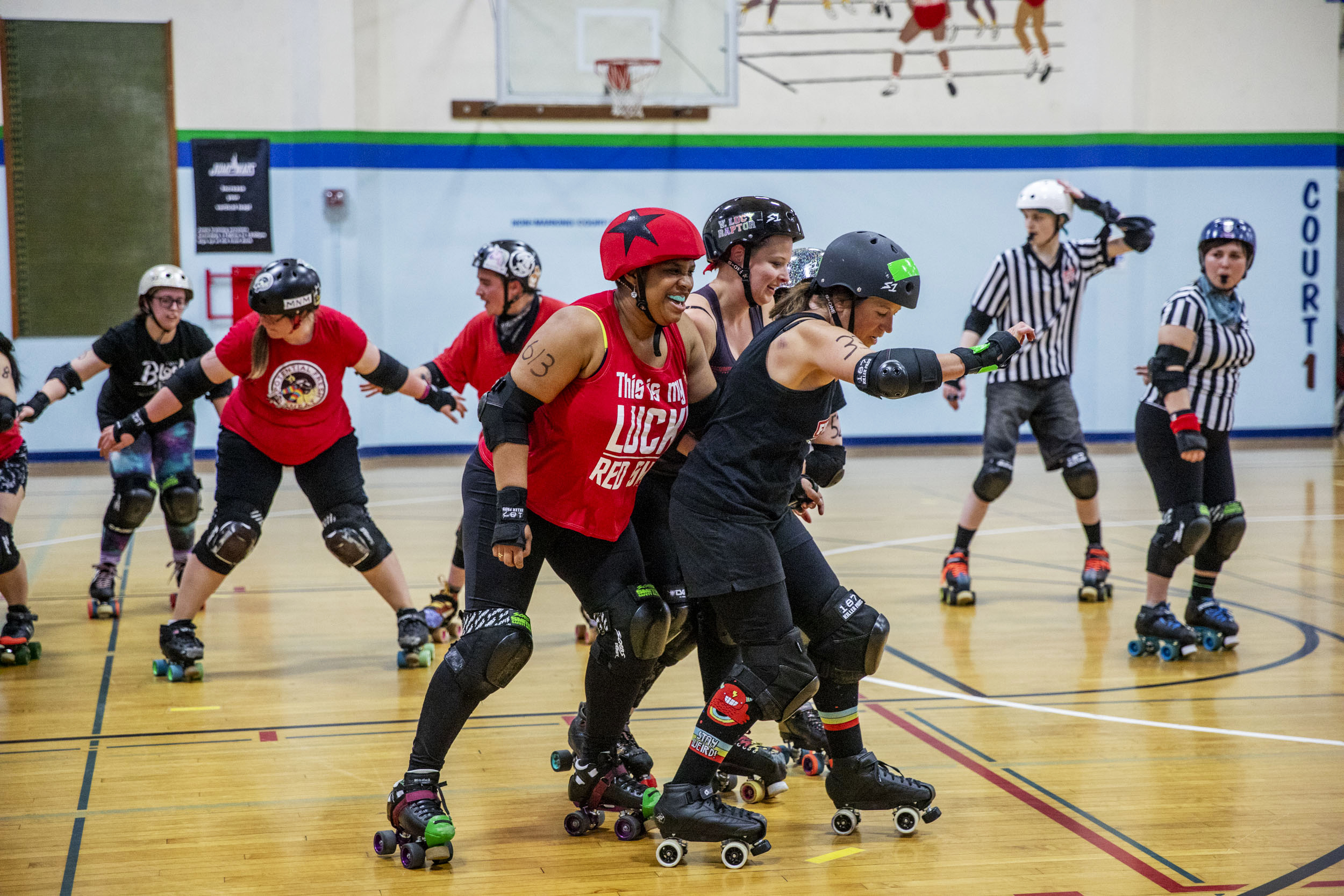 The PFM recreational league roller derby during a scrimmage at the Magnuson Park Community Center in Seattle on June 9, 2019.

The PFM recreational league roller derby during a scrimmage at the Magnuson Park Community Center in Seattle on June 9, 2019.

Here’s why. First, the space needed is pretty big. The track is 55 by 88 feet, and the recommended 10-foot referee lane makes it, in actuality, 75 by 108 feet. With Seattle’s real estate market what it is, leasing a suitable space is clearly financially impossible for most leagues, which are volunteer-run and supported by member dues, donations and ticket revenue. Most leagues now practice and even play in community centers. Yet even this is a stretch — few of Seattle’s community center gyms are large enough for a full-size track.

Second, roller derby needs lines. Like most sports, roller derby is played within boundaries; they are crucial to game play. The point of the sport at its most basic is for a team’s jammer to pass all the other team’s players without crossing the lines. Cutting — gaining advantage by going outside the lines — is one of the most common penalties and often comes down to a single skate wheel on the wrong side of the line. Knocking skaters out is a major component of play. Where the lines are can’t be guessed at, and because skaters do skate over the lines all the time, they also can’t present a physical barrier.

Since January 2018, PFM has made Magnuson Community Center its home, taping our track lines onto the gym floor. During that time, with Rat City in its Shoreline Nest and Rainier Roller Girls just outside Seattle’s city line at the Southcenter Roller Rink, PFM’s taped track became the only place in Seattle to skate derby. With the Nest being “developed” (read: demolished) into yet another apartment building and Southcenter no longer renting to RRG, this track is even more vital to the city’s thriving derby community.

Now even that track is threatened: Seattle Parks and Recreation recently decreed that the tape lines be removed to preserve the floor’s finish. Department Superintendent Jesús Aguirre, in an early June email, reiterated his concern about “gym-floor maintenance” and told us that the department is reaching out to other parks and recreation jurisdictions nationwide to consider “factors and feasibility.”

We could argue about whether tape lines will damage the floor (they won’t; when the first set of taped lines was pulled up after nine months for the floor’s scheduled refinishing, there was no damage that the refinishing didn’t make short work of). We could point out that the floors are refinished on a regular schedule anyway, so damage is irrelevant. We could also point out that tape lines weren’t our first choice: PFM asked to have the lines painted into the floor when it was refinished.

Why are the modest needs of our sport not being supported by the city’s public sports facilities? Why do roller derby leagues seem to have to fight harder than other sports to rent practice times? Why have PFM’s requests to have lines painted alongside those of other sports at Magnuson been denied?

Why have Mike Wallace, parks planned maintenance manager, and others suggested to roller derby leagues that they use cones instead of lines, when no one would suggest basketball teams use cones in place of hoops? (There are 86 basketball courts in the city of Seattle. One roller derby track is not an unreasonable ask.)

We are not alone in our call for more equitable treatment. There is a proposal being brought to Seattle Parks and Recreation, with the support of the Seattle LGBTQ Commission, the Seattle Women’s Commission and the Seattle Human Rights Commission, requesting that roller derby lines be painted onto the floors of all community centers large enough for them.

Since moving to Magnuson, PFM has seen a tremendous influx of skaters. There is a growing demand for this sport — after all, what woman looking at the news these days doesn’t want to hip-check her problems away? — and its simple needs are not being met. 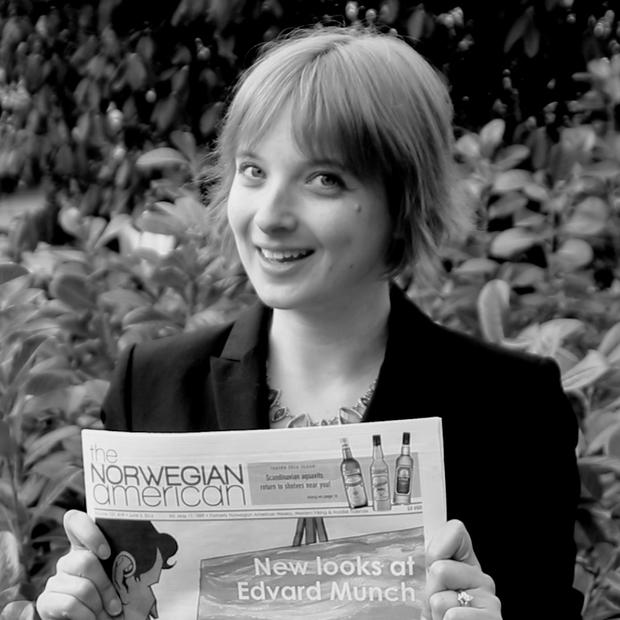