At the top of the Space Needle, summer crowds swarm the circular observation deck, enthralled and thrilled by the transparent walls. A tourist with a British accent asks a stranger to take her picture while she sits on the glass floor, so it will appear as if she’s floating some 600 feet in the air. She giggles and says she’s petrified, then asks for one more shot — “This time with me looking down at the ground.”

She doesn’t notice the giant “SOS” visible in the grass below, a plea spelled out in 40-foot-long charred logs.

“Distress Signal” is one of three installations in a new temporary exhibit called The Smoke Season (on view through September 15) by Seattle artist Ted Youngs. A Washington state native, Youngs (48) enlisted architects, engineers, forestry workers, the Department of Natural Resources and the Pacific Science Center to help him realize his vision — an effort that, he says, was much easier than “bringing three million people out to the forests” to see wildfire damage firsthand. The project anticipates the increased wildfires predicted to hit the Pacific Northwest this summer; the title is a reference to the so-called fifth season now experienced in the Northwest (fall, winter, spring, summer, smoke).

“We get that monochromatic sky in August,” Youngs says. “It’s all gray tones with ash in the air, and the sun looks like a red puck in the sky.” Alarmed by the “new normal” of smoke blanketing the city, wafting in from fires in Eastern Washington and British Columbia, Youngs hopes his installations — which stand in stark contrast to the mod, clean lines of Seattle Center — convey the immediacy of the climate crisis, and the need for action. “I wanted to bring in the trees and let them speak for themselves,” he says.

On a grassy expanse along Broad Street, the blackened SOS letters lie prostrate at stiff angles in what translates to 52,000-point font. The whiff of smoke still radiates from the surface, detectable from a half-block away. The bark is burned and missing in patches, revealing pale, pristine skin beneath. Despite the extensive time and machinery required to get the 10 tons of trees in place, they appear hastily thrown together, as if in an emergency. “The distress signal has always been about expressing grave concerns, with urgency,” Youngs says. “So you’re not worrying about perfect joinery.”

People rest on the dead trees, eating sandwiches out of plastic bags, scrolling through their phones, looking at a map. “There’s a tragedy that’s built into the piece,” Youngs says. “We’re so close — we can sit on it — but we just can’t see it.”

Youngs acquired the burned trees for The Smoke Season from the remnants of the 2017 Jolly Mountain fire in the Okanogan-Wenatchee National Forest, the source of Seattle’s first heavily smoky summer. Started by a lightning strike, that fire burned more than 35,000 acres — an area if superimposed on Seattle neighborhoods would stretch from Blue Ridge to South Park, and from West Seattle to Leschi.

A bit northeast of “Distress Signal,” four more burned trees lie on the lawn in parallel lines. Called “Future Shadows,” this section of Smoke Season feels eerily still. Each of the charred Douglas firs is aligned with the base of a living London plane tree, suggesting their own shadows, their own deaths. “This one is about mourning,” Youngs says, as shiny tour buses pull up and release passengers who step out and look straight up at the Space Needle. At noon on August 11, the date the Jolly Mountain fire started, the real shadows of the London planes will align precisely with their carbonized doppelgangers.

Artwork as memorial is nothing new — just steps away, in the shadow of MoPOP, stands a statue honoring Soundgarden’s Chris Cornell. But memorial art most often commemorates humans or historic events. The Smoke Season, however, joins a collection of Seattle artworks made in the name of trees. 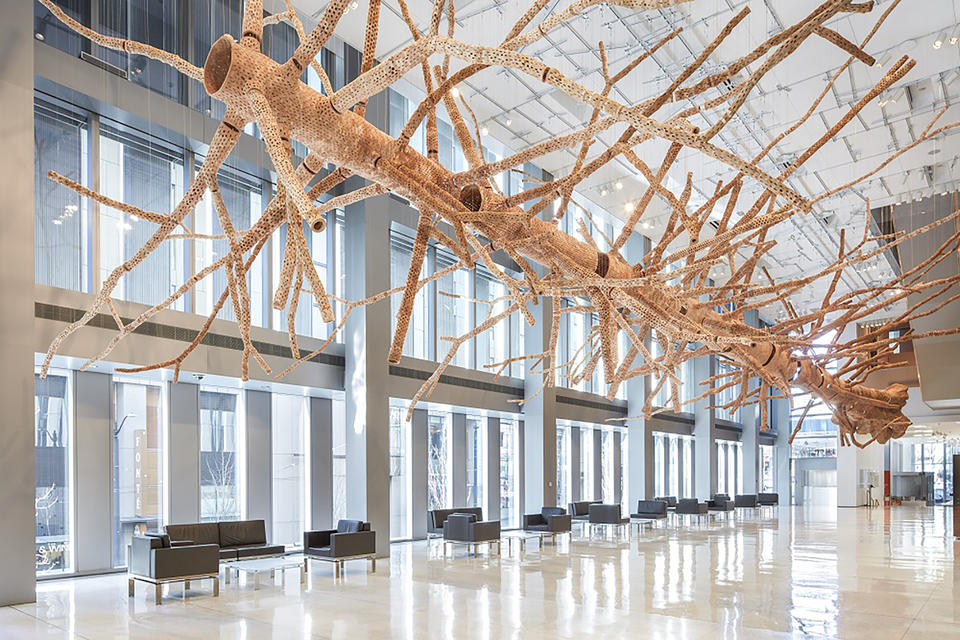 John Grade’s “Middle Fork” (2014), hand-built from the plaster cast of a Western Hemlock, in the lobby at Seattle Art Museum. (Photo by Ben Benschneider, courtesy of SAM) 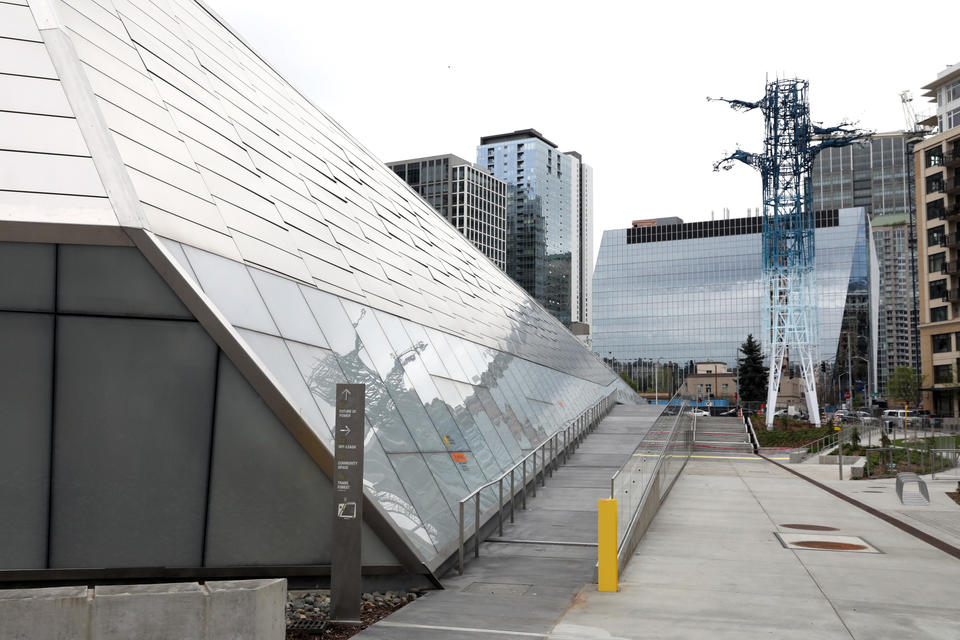 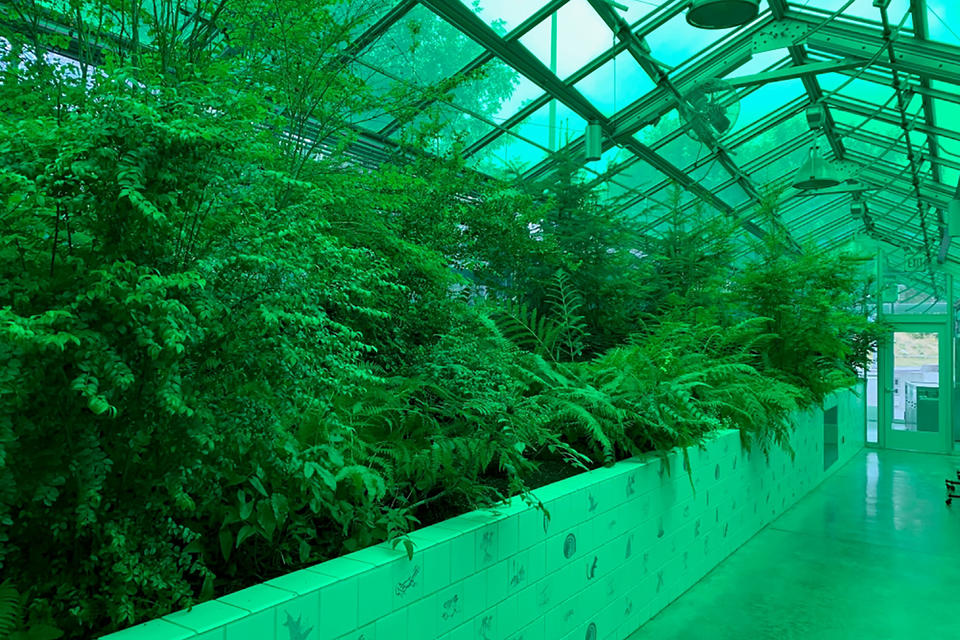 The Western Hemlock nurse log in the Neukom Vivarium (2006) at Olympic Sculpture Park. Brought in from the Green River watershed, the tree is slowly decomposing and sprouting new flora from the seeds that were stuck in its bark. Green filters on the windows recreate the light hue of its home forest. (Photo by Brangien Davis/Crosscut) 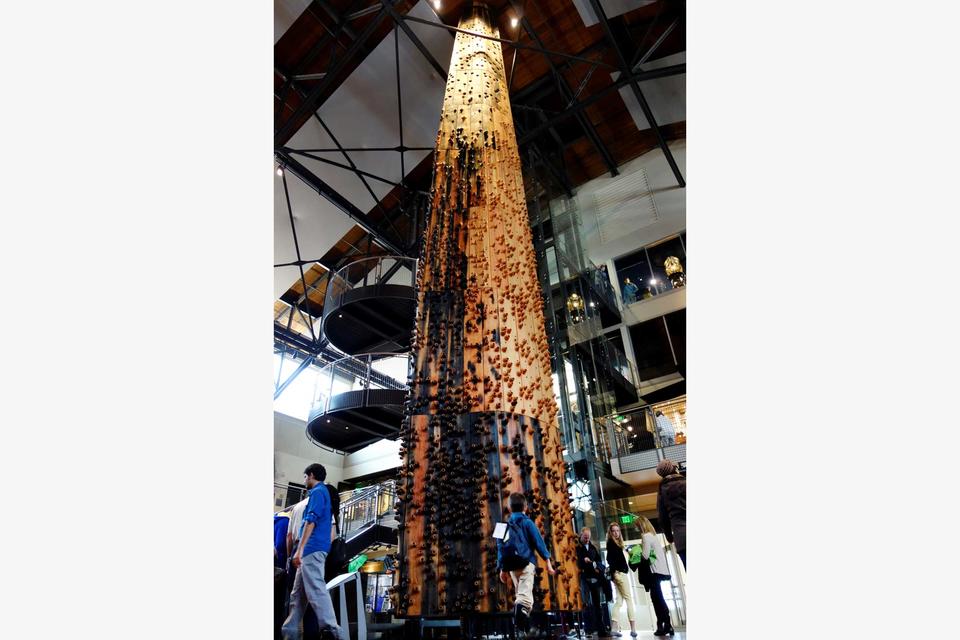 John Grade built “Wawona” (2012) at the Museum of History and Industry, from the salvaged wood of a turn-of-the-century lumber-carrying schooner. (Photo courtesy of MOHAI) 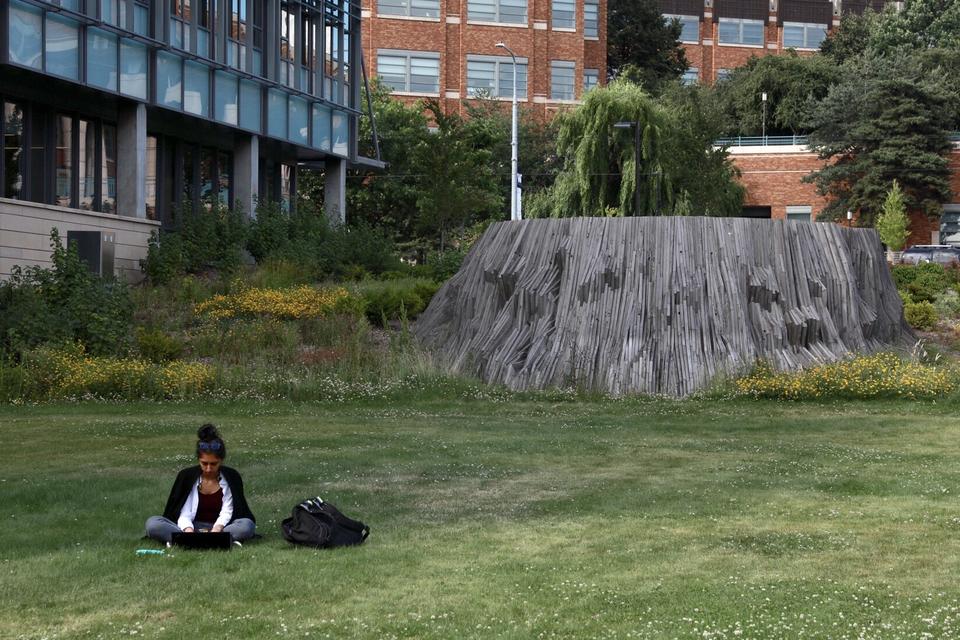 “Stronghold” (2007) by Brian Tolle at the University of Washington. The sculpture has the same diameter (20 feet) as the Quinault Lake Big Cedar in Olympic National Park — the largest Western red cedar in the world. (Photo by Matt M. McKnight/Crosscut)

The 110-foot-tall steel sculpture “Transforest” towers over the new Denny Substation at Denny Way and Minor Street. Created by Seattle artists Daniel Mihalyo and Annie Han (of Lead Pencil Studio) and installed last month, it combines the shape and size of a transmission tower with that of an ancient Douglas fir — a comment on both the forests that once thrived here and the power required to keep our burgeoning city buzzing.

On the University of Washington campus, artist Brian Tolle’s “Stronghold” also pays homage to the old-growth trees that covered the landscape before logging became standard practice. Here, what appears to be an immense stump — some 20 feet in diameter — is constructed of milled, stacked and shaped cedar planking.

At the Museum of History and Industry, local artist John Grade’s 11,000-pound sculpture “Wawona” is a hollow treelike trunk that pierces the floor and the ceiling of the atrium. Honoring old-growth trees and the industry they fed, Grade crafted it entirely from Douglas fir panels salvaged from the 1897 Wawona schooner, a long-running Puget Sound lumber carrier. And Grade has a second tree memorial, this one suspended in the lobby of Seattle Art Museum. For “Middle Fork,” he made a cast of a 140-year-old western hemlock alive and well in the Cascades, and replicated its every branch and bump with tiny pieces of salvaged cedar. His intention is to eventually return the artwork to the forest and allow the sculpture to decompose next to its muse.

Decomposing at this very moment is the western hemlock encased in the “Neukom Vivarium” (a sort of large-scale terrarium) at the Olympic Sculpture Park. Artist Mark Dion brought the fallen tree in from the Green River watershed and built what he calls a “Sleeping Beauty coffin” for it — a glass box containing a high-tech ecosystem that perfectly replicates the conditions of the forest it came from (including a perpetually green-tinged light).

“
“ I wanted to bring in the trees and let them speak for themselves.”
— Ted Youngs

As the nurse log decomposes, fresh growth (including spruce, Douglas fir, cedar, hemlock and huckleberry and countless ferns) sprouts from its slowly collapsing trunk. The tree is dead, but giving life, a “memento mori” on an elaborate life support system. In an interview with Art21, Dion explains, “All those things are substituting what nature does, emphasizing how, once that’s gone, it’s incredibly difficult, expensive, and technological to approximate that system — to take this tree and to build the next generation of forests on it.”

Youngs is concerned that we’re at a pivot point in environmental history — a place from which we can’t turn back. “For communities across the West,” he says, “this is just the beginning of our consciousness of smoke.” And while the haze may interrupt summer fun for Seattleites, the situation is far more dire for people living in wildfire zones. When Youngs first came up with the idea for Smoke Season, he pitched it to several local cultural venues, most of whose packed schedules couldn’t permit an exhibition until next year. But he believes we’ve already waited too long to talk about remedies. “This isn’t a 2020 conversation,” he says. “This has to happen now.”

The Smoke Season has one more component, “Lone Fir,” installed on the plaza at the Pacific Science Center. The tree is positioned vertically at the north entrance, a single, tapered spine representing the 35,000 acres that burned. Black and organically bumpy, it looks entirely out of place amid Minoru Yamasaki’s smooth, white decorative arches, which once suggested the great promise of the space age. A few people stop to look at the installation, reading the informational plaque, checking the color-coded air quality sign (on this June day, it’s green). They peer up at the tree, which stands parallel to the Space Needle — one conceived as a beacon of humanity’s bright future, the other an urgent message from the here and now. 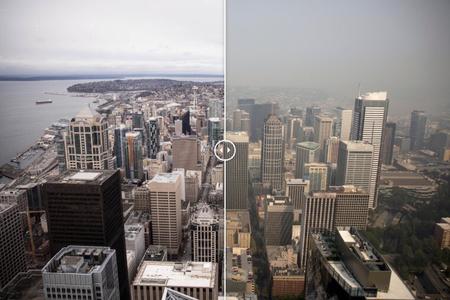 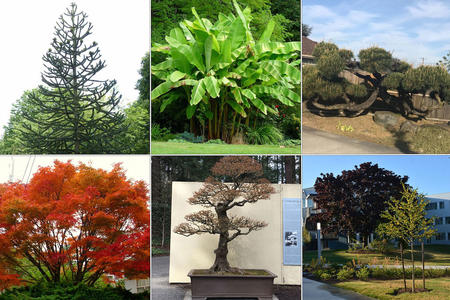 An interactive ‘storymap’ of trees in South King County

A Seattle artist is seeding a ‘forest of stories.’ 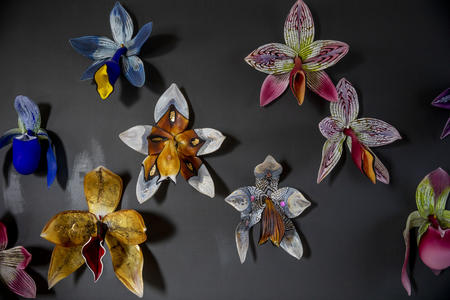 The region is poised to lead the way in electric flight thanks to an ambitious partnership between MagniX and Harbour Air.